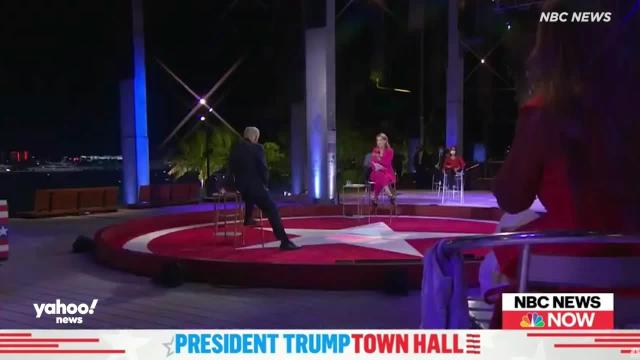 Scroll back up to restore default view.Joe Biden bested Donald Trump on Thursday night in a category sure to grab the president’s attention: television ratings.Figures released Friday from Nielsen show that Biden’s town hall on ABC averaged 13.9 million viewers, while Trump’s averaged 10.6 million on NBC. But even when viewership figures are added for MSNBC and CNBC, cable networks owned by NBC that also carried Trump’s town hall, the president’s total viewership was 13 million, lower than Biden’s.Trump has long touted his ability to generate impressive television ratings as a sign of his popularity with the American public. Following his first presidential debate with Biden, for instance, Trump asserted that he had, in fact, won the war for eyeballs.
In July, when Trump announced he would resume his starring role at televised briefings of the coronavirus task force, he explained that one reason for doing so was that they received good ratings.“Well, we had very successful briefings,” Trump told reporters. “I was doing them and we had a lot of people watching. Record numbers watching. In the history of cable television, there’s never been anything like it.”

Joe Biden at an ABC town hall with voters on Thursday. (Heidi Gutman/ABC via Getty Images)Ahead of Thursday’s dueling town halls, which came about after the president declined to participate in a virtual debate with Biden, Trump campaign senior adviser Jason Miller predicted that “we’re gonna have a much bigger audience than Joe.”The Nielsen numbers do not tally the number of people who watched the town halls online, After he got word that Biden’s speech at the Democratic National Convention had been watched by more television viewers than his at theRepublican National Convention, Trump claimed that he had still won the war for eyeballs.

Michael Collins, USA TODAY,USA TODAY•October 17, 2020   WASHINGTON — Reliably red Georgia is not a state where you’d expect President Donald Trump to make an appearance just 18 days before the election.But Trump sought Friday to fire up supporters in the Peach State amid polls that show him locked in a tight race with Democrat Joe Biden.”Proud citizens like you helped build this country, and together we are taking back our country,” Trump told a cheering crowd during an airport rally in Macon, Georgia.Noting that early voting is underway in Georgia, Trump urged supporters to „get your friends, get your family, get your neighbors, get your boss if you have a boss … and get out and vote.”

The Georgia rally is the latest stop on a multi-state campaign swing as Trump tries to close the gap with Biden, who has consistently maintained an edge in national polls and in some key battleground states. Recent polls show Trump slightly trailing Biden even in Georgia, prompting the late-hour campaign stop in Macon.“Recent polls show the race is tighter than it should be,” said Eric Tanenblatt, a veteran Republican strategist and fundraiser in Georgia. „What you need to do in cases like that is rev up your troops.”Tale of two town halls: A town hall with Trump was testy, a forum with Biden was much quieter: Here are takeaways from each

President Donald Trump arrives for a Make America Great Again rally at Middle Georgia Regional Airport in Macon, Georgia on October 16, 2020.For Democrats, the pathway to the White House seldom winds through Georgia. The last Democrat to carry the state in a presidential contest was Bill Clinton in 1992. Trump beat Democrat Hillary Clinton by five points in Georgia in 2016.But Biden’s strong showing in recent polls has turned Georgia into a bona fide battleground state and given Democrats hope that this is the year the state will finally turn blue.Biden holds a 1.2 percentage point lead over Trump in the RealClearPolitics average of Georgia polls. A Quinnipiac University poll released Wednesday put Biden’s lead at seven points, raising concerns among some Georgia Republicans.“It’s pretty clear that the race is very close here in Georgia,” said Alan Abramowitz, a political scientist and professor at Emory University. “In fact, if anything, Trump seems to have fallen slightly behind. There’s not much question that Georgia is very much in play in the presidential election.”

That shouldn’t be surprising, given the shifting demographics in the state, political analysts say.

An influx of new younger voters in the Atlanta area and a growing Latino and African-American population have allowed Democrats to make significant inroads into the state. Mid-sized cities such as Macon and Savannah remain Democratic, while the surrounding areas and many smaller cities are Republican strongholds.

Trump is looking to offset Biden’s margins in densely populated urban and suburban areas by running up the tally in rural parts of the state where the GOP still dominates.

It’s a strategy that worked in the 2018 gubernatorial election, when Republican Brian Kemp narrowly defeated Democrat Stacy Abrams in a closely watched race by winning nearly 90 percent of the state’s rural counties. Kemp got some last-minute help from Trump, who parachuted into Macon for a rally just two days before the election to invigorate GOP voters.

One for the Gipper: Maryland’s Republican Gov. Larry Hogan writes in Ronald Reagan rather than vote for Trump

Also galvanizing Georgia voters this year are a couple of statewide contests.

In a bit of a fluke, both of Georgia’s U.S. Senate seats are on the ballot. Republican incumbent David Perdue is in a tight race with Democrat Jon Ossoff. Republican Kelly Loeffler, whom Kemp appointed last December to replace retiring Johnny Isakson until a special election could be held, is facing a tough fight in a crowded field that includes GOP Rep. Doug Collins. The winner is likely to face a runoff next January against Democrat Raphael Warnock to determine who will serve the remaining two years of Isakson’s term.

Despite polls showing a close presidential contest, the Trump campaign says it feels good about the state of the race in Georgia.

„The Trump campaign is confident that the president will win Georgia, with his visit providing a boost as Georgians are casting their early ballots,” spokeswoman Samantha Zager said.

Abramowitz said he expects the race to be close no matter who wins.

“My guess is, at this point, the statewide margin is going to be two points one way or another,” he said. “I would not be surprised if Biden narrowly wins Georgia.”

Tanenblatt predicts that the race will be more competitive than recent presidential contests, but he expects Trump to emerge the winner. Republicans still control the governorship, all of Georgia’s constitutional offices and the majority of the state’s congressional delegation.

“All of those people in office have supporters, have organizations, and there’s an infrastructure that the Republican Party has in the state,” he said. “The Democrats don’t have that. I think revving up the infrastructure and the grassroots is what is going to determine the final outcome.”

For Trump, “I still think at the end of the day, it’s going to break his way,” he said.

Biden vs. Trump: You saw them in town halls, how do they differ on international stage?