An Atlantic disturbance near Bermuda is on its way to forming into a cyclone sometime soon, while another disturbance in the Caribbean is far less likely to see action, according to the National Hurricane Center.

About 500 miles east-southeast of Bermuda, a non-tropical low pressure system is causing showers and thunderstorms, according to the NHC’s 8 p.m. advisory.

“Gradual development is expected, and a subtropical depression or storm is very likely to form during the next day or two while the low meanders well to the southeast of Bermuda,” forecasters said.

Over in the southwestern Caribbean Sea, a broad area of low pressure is expected to form but not until next week, forecasters said.

The latest advisory says the system may see some gradual development through the middle of next week while it moves slowly northward or north-northwestward over the western Carribean Sea.

Following a brief pause in the record-setting 2020 Atlantic hurricane season, forecasters say as many as two storms could be spinning at once next week as atmospheric conditions become conducive for development. One storm may take shape a few hundred miles from Bermuda, while another system slowly organizes near Central America.

A total of 25 systems have reached tropical storm strength or greater so far in the Atlantic Ocean this season, with the most recent storm being Hurricane Delta.

With a couple of storms possibly in the offing in the coming days, this season is rapidly closing in on the record of 28 named storms set in 2005. That year was also the only other year that the Greek alphabet had to be utilized.

The next systems to reach tropical storm strength, or have maximum sustained winds of 39 mph or greater, would take on the names Epsilon and Zeta.

A zone east-southeast of Bermuda is likely to be the breeding ground of the next tropical system, according to forecasters.

„This organizing trend is expected to continue into Sunday, and a subtropical depression or storm is likely to form by then,” Miller added.

A subtropical storm has both tropical and non-tropical characteristics. Even if the system is first classified as subtropical, it may become fully tropical over the warm waters of the Atlantic.

This feature could meander at times to the south and west next week, before eventually being steered toward the north. A cold front that may be located near or along the East coast of the United States late next week should help deter the storm from bringing direct impacts to the region.

Warmer weather in store for the Northeast in the wake of coastal storm by Brandon Buckingham,AccuWeather•October 17, 2020 The first coastal storm of the year along the East coast brought a chilly rain and the first accumulating snowfall of the season for the high terrain of New England at the beginning of the weekend — and forecasters say it will also play a role in rollercoaster-like temperature swings that are expected across the Northeast in the coming days.In eastern Vermont, residents woke up on Saturday morning to snow blanketing the ground. Steady snow was also reported in New Hampshire and Maine, along with slippery travel.

Snowy scenes have set up in parts of eastern Vermont this morning. Let us know how much you have seen this morning! #vtwx #nywx 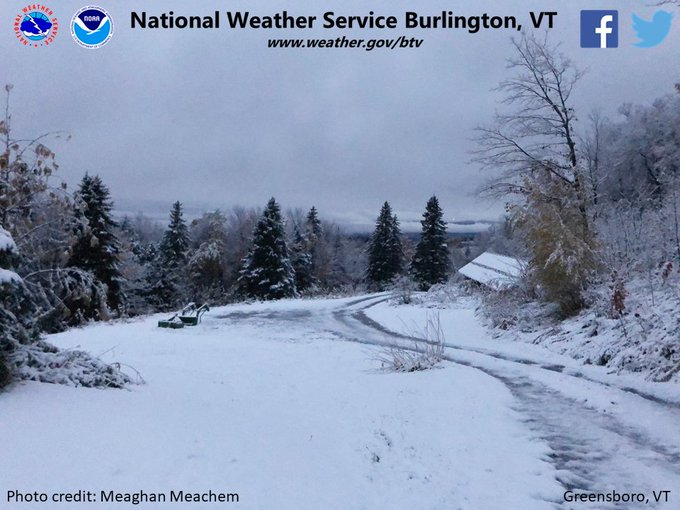 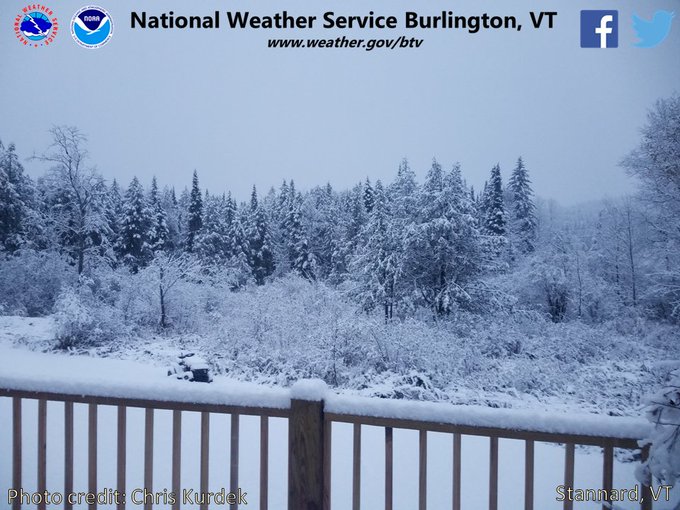 Snowy scenes have set up in parts of eastern Vermont this morning. Let us know how much you have seen this morning! #vtwx #nywx pic.twitter.com/6cs2NaExGl

As the coastal storm lifts off into Canada into Saturday night, calm and chilly conditions will remain in place across the Northeast as an area of high pressure settles into the region. Widespread lows in the 30s Saturday night will encompass the entire interior Northeast, and even some locales along the Interstate-95 corridor.

The coldest night of the fall season is possible for places like Allentown, Pennsylvania; Hartford, Connecticut and Springfield Massachusetts, as mainly clear skies should allow for temperatures to dip into the mid-30s, and for frost to develop in the typical cooler spots around town by dawn on Sunday.

Cities along and east of Interstate 95, including Philadelphia, New York City and Boston will likely experience low temperatures just high enough in the lower 40s, limiting the potential for any frosty conditions. 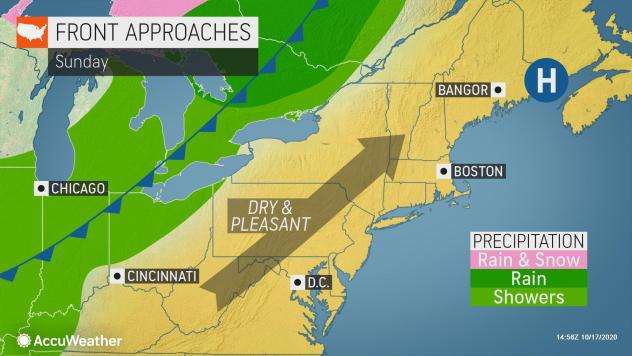 For those that are not quite ready for the cold weather to stick around for good, there is good news in the forecast as temperatures begin to trend upward into the day on Sunday.