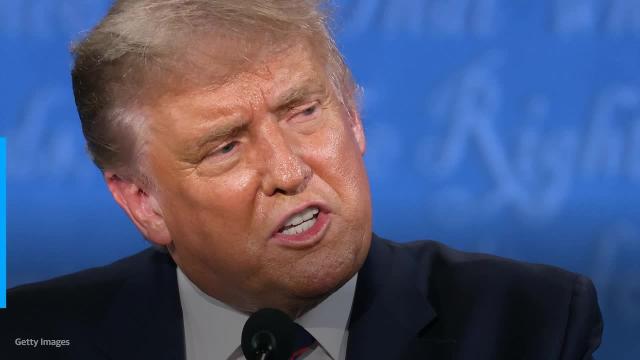 Evangelical pastor Robert Jeffress has become one of the few high-profile supporters of President Trump to publicly acknowledge that the election was won by Joe Biden — and to urge his followers to pray for (rather than against) him.

Jeffress, a frequent visitor to the White House who traveled with Trump during the 2016 campaign, is the senior pastor at First Baptist Church in Dallas, and his sermons are carried on 1,200 television stations across the U.S. Jeffress is also a frequent guest on Fox News, so his voice reaches many evangelical Trump voters. His message to those refusing to accept Biden’s apparent victory was simple: Don’t be hypocrites.

“It’s always easier to submit and to pray for someone when he was our preferred candidate. But the rubber really meets the road when the person who takes office is not the one we supported,” Jeffress wrote. “Here is our chance to show that Christians are not hypocrites.”

He also said that Trump was fully within his rights to challenge the election results in court, but he remains skeptical that those cases will yield a new winner.

“I don’t pretend to be an election expert,” Jeffress told the Dallas Morning News in a phone interview. “I trust that if there is that kind of fraud that it would be uncovered.”

On Wednesday, however, Jeffress abruptly reversed himself, saying that the outcome of the election would not be decided until the Electoral College votes in December.

Jeffress isn’t the only Trump confidant and supporter to voice skepticism about the president’s legal strategy. Lawyer Alan Dershowitz, who testified during Trump’s Senate impeachment trial, believes those cases will not overturn Biden’s victory.

“I think this election has been conducted in a valid fashion. I don’t see any legal arguments that would change the outcome of the election,” Dershowitz said this week in an interview with Sky News. “There are some arguments in Pennsylvania about late ballots, but even if all those late ballots are discounted, Vice President Biden still wins the election overwhelmingly, so I think we can be secure that the next president of the United States will be Joe Biden.”

Biden, meanwhile, has called Trump’s refusal to concede the election “an embarrassment.” Numerous foreign leaders have reached their own conclusion and have congratulated Biden and Vice President-elect Kamala Harris in recent days. Yet many Republicans at home have been reluctant to acknowledge the reality reflected in the tally of votes nationwide.

Asked by reporters on Wednesday whether Biden was indeed president-elect, Sen. Marco Rubio seemed to hedge.

“Clearly if … none of these court cases hold up, that’s exactly what he will be,” Rubio responded. “And that’s what the preliminary results seem to indicate. But that doesn’t mean because I haven’t seen evidence of these claims, it doesn’t exist.”

Sen. Pat Toomey of Pennsylvania went further, telling the Washington Post’s Robert Costa, “There’s no question that most Republicans are disappointed that the president does not appear to have won this election.”

So far, however, just a handful of Republicans have offered Biden their congratulations.

But even for some of the people who know Trump best, the writing is on the wall.

“He’s going to go down to Palm Beach and play golf and live the normal life, I think,” Trump’s first wife, Ivana Trump, told People magazine this week. “He has plenty of money, places to go and live in and enjoy his life.”

Ivana, the mother of the president’s children Ivanka, Eric and Don Jr., added that Trump’s temperament will not allow him to go away quietly.

To the editor: If and when President Trump realizes he has lost the election, he will be faced with the decision of how to pardon himself. As columnist Harry Litman outlines, his ability to self-pardon is questionable.

A winning strategy for all would be for Trump to pardon the family and friends he wishes to, then resign and have Vice President Mike Pence pardon him.

Everyone would win. Trump would get an unquestionable pardon for potential federal offenses, avoid the embarrassment of attending the inauguration, and give Pence a boost with his supporters. Most importantly, this would spare President-elect Joe Biden the decision on whether to allow the Justice Department to pursue an indictment, something that would anger the Republicans and make compromise more difficult.

For those who want to see Trump in stripes, there are potential state charges for which he cannot be pardoned.

To the editor: It’s all well and good that Biden strikes a conciliatory tone, but it leaves the elephant in the parlor — what to do about Trump.

The multiple scenarios are intriguing. It’s a given that Trump is in deep legal jeopardy.

Putting aside the „self-pardon” card, Trump has hinted that maybe he „will have to leave the country.” Of course he could resign before his term runs out and be pardoned by Pence.

More than 70 million people voted for Trump to have a second term. He can continue inflicting damage on this nation by waging a 2024 comeback campaign or continuing to play the martyr. So, the best outcome would be if he retreated.

In this way his core constituents would finally be able to do the soul-searching they might otherwise have avoided.

BBC•November 12, 2020 China’s government has condemned the mass resignation of most of Hong Kong’s opposition as a „farce” and an „open challenge” to its authority.

On Wednesday, 15 opposition members announced their resignation in solidarity with four fellow lawmakers who had been dismissed.

Beijing said the four were deemed a threat to national security.

But many see it as further restricting Hong Kong’s rights, including freedom of speech, which Beijing denies.

China’s Hong Kong and Macau Affairs Office on Thursday condemned the mass resignation as „an open challenge” against the Chinese government’s authority and the Basic Law, Hong Kong’s mini constitution.

It also said the move showed their „stance of stubborn resistance” against the central government.

„If these lawmakers hope to make use of their resignation to provoke radical opposition and beg for foreign interference, they have miscalculated,” a spokesperson said.

What led to this?

On Wednesday, a resolution passed by Beijing said lawmakers should be disqualified if they support Hong Kong independence, refuse to acknowledge China’s sovereignty, ask foreign forces to interfere in the city’s affairs, or in other ways threaten national security.

Later on Wednesday, another 15 pro-democracy lawmakers announced they would resign en masse in solidarity.

On Thursday, they were absent from their seats in the LegCo.

The city’s 70-seat legislature has 21 opposition members, usually referred to as non-establishment. Only two of those will now remain in the parliament.

Why were the four dismissed?

City officials say the four lawmakers removed on Wednesday had already been disqualified from running in the next election, originally scheduled for September 2020 but postponed to next year.

Hong Kong Chief Executive Carrie Lam explained that legislators who did „not fulfil the requirement and the prerequisite for serving on the Legislative Council” could not be allowed to continue serving on it.

Beijing and Hong Kong officials have not given details on how exactly the four men had contravened the rules.

Two of them, Dennis Kwok and Alvin Yeung Ngok-kiu, were among the signatories on a joint letter to US senators calling for sanctions on Hong Kong.

Kenneth Leung is accused of indirectly supporting sanctions after attending a press conference on the matter following a trip to the US.

Election officials had previously accused the fourth man, Kwok Ka-ki, of having a „purported intention” to ask foreign powers to sanction Hong Kong, according to local reports.

Wednesday’s resolution to allow the ousting of lawmakers also came amid frustration by the pro-Beijing camp in Hong Kong over what they say is opposition filibustering to delay and block legislation.

Who are the four?

Alvin Yeung: Leader of the pro-democracy Civic party and a practising barrister, he reportedly gave up his Canadian citizenship to run for office in Hong Kong. Mr Yeung first won a seat in the LegCo in 2016

Dennis Kwok: Also a barrister, Mr Kwok is a founding member of the Civic Party. The former deputy chairman of the House Committee was earlier accused of paralysing Legco by using filibustering tactics, in a move the Chinese Central Government in Hong Kong called „malicious”

Kenneth Leung: The senior tax consultant is a member of the pro-democracy parliamentary group, the Professionals Guild. He has sat in the Legislative Council since 2012

Kwok Ka-ki: The Civic Party member, who is a urologist by trade, has served as a legislative councillor representing the medical functional constituency since 2004

What does this mean for Hong Kong?

The developments underscore the rapid expansion of Beijing’s influence in the territory, pushing for loyalty from all levels of power.

Observers say that without the pro-democracy lawmakers, there will be no effective opposition and LegCo reduced to a rubberstamp parliament.

Earlier this month, authorities already arrested several other pro-democracy legislators over scuffles during a LegCo meeting in May.

The city’s leader is already chosen by pro-Beijing committees, and only half of the LegCo seats directly elected.

A Special Administrative Region since its return from Britain in 1997, Hong Kong was to have its own legal system, multiple political parties, and rights including freedom of assembly and free speech for 50 years.

But the new security law for the city passed in response to months of pro-democracy protests criminalised „secession, subversion and collusion with foreign forces”.

Beijing said the law would return stability to the territory, but critics said it effectively curtailed freedom of speech and protest.

What has been the reaction?

The US has warned it will impose further sanctions against China targeting those responsible for extinguishing Hong Kong’s freedom.

Germany, current holder of the EU’s rotating presidency, and Australia have also condemned the firings.

But Chinese foreign ministry spokesman Wang Wenbin on Wednesday said the disqualification of the four lawmakers was „rational, reasonable and in line with the constitution and laws”.

„This was a necessary requirement for adhering to and improving on ‘one country, two systems’, implementing Hong Kong’s Basic Law, as well as Hong Kong’s National Security Law,” he said at a news conference in Beijing.