Indonesia’s Sulawesi island was rocked by a powerful earthquake early Friday which set off landslides, left buildings in ruins and killed at least seven people, according to local authorities.

Residents were sent fleeing from their homes as the earthquake, which registered 6.2 in magnitude on the Richter scale, struck around 1 a.m. local time.

In Majene, four deaths and 637 injuries have been confirmed, while three more deaths and 24 injuries were reported in neighboring Mamuju, according to Reuters.

The epicentre of the earthquake was 22 miles (36 km) south of Mamuju, Indonesia, according to the United States Geological Survey. The temblor was rather shallow, occurring at a depth of 11 miles (18 km) below the earth’s surface.

Sitting along the Pacific’s ‘Ring of Fire’, Indonesia is no stranger to tectonic activity.

Between the two earthquakes, Indonesia’s disaster agency stated that at least three landslides have been triggered with many communities experiencing power outages. At least 60 homes have been damaged.

Images on social media showed the Mitra Manakarra hospital in Mamuju left in rubble, with as many as 20 people feared to be trapped underneath.

Damage to a bridge has cut off at least one route into Mamuju, according to Reuters.

Damage to a bridge has cut off at least one route into Mamuju, according to Reuters.

LOOK: Rescuers search for survivors at the Mitra Manakarra hospital in Mamuju city on January 15, where as many as 20 patients and staff are trapped beneath the rubble after a 6.2-magnitude earthquake rocked Indonesia’s Sulawesi island. |
Firdaus/AFP 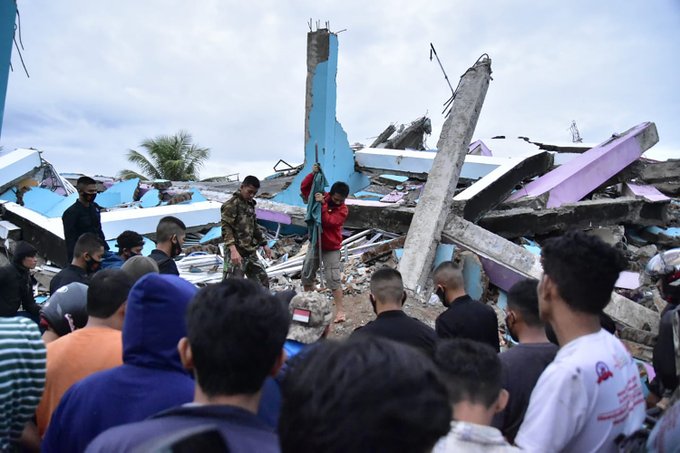 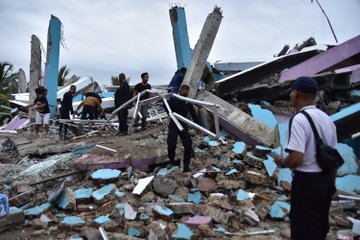 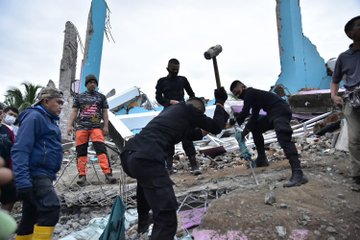 While the inland earthquake posed no tsunami threat, residents living near the coast fled to higher ground as the ground beneath rumbled, according to The Associated Press. As many as 10,000 people are seeking refuge in temporary shelters.

As damage assessments and the search for survivors continues over the next several days, there will be the daily threat for stray showers and thunderstorms which can disrupt recovery efforts. High temperatures will be near 90 F (32 C) into next week.

More sea-effect snow in Japan’s forecast After a quick-moving storm brought snow to parts of Hokkaido and northern Honshu during the middle of the week, another storm is set to take a swipe at the region at week’s end.This storm will emerge from northeastern China over the Sea of Japan late in the day on Friday. Similar to the midweek storm, the center is expected to track over the Hokkaido region of northern Japan through Saturday.A path across northern Japan will help to bring more mild air farther north through the end of the week. Daytime temperatures in the middle 30s F in the north to the lower 60s in the south on Thursday will trend a couple of degrees warmer by Saturday, especially in southern areas.

This will keep snow limited to Hokkaido, while a mix of rain and wet snow is expected from Tohoku to Chubu, where temperatures will be around freezing (zero degrees C or 32 degrees F).

A snowfall accumulation of around 1-3 inches (3-8 cm) is forecast for the higher elevations where more snow than rain is expected. Higher totals will be possible in the peaks.

Areas along the northern coast of Japan that received heavy snowfall over the weekend can expect mostly rain with this late-week storm.

While rainfall totals are expected to reach only around 1-2 inches (25-50 mm) from western Tohoku to northern Kansai, additional water from snowmelt triggered by moderate temperatures can lead to flash flooding in low-lying and poor drainage locations. This will be especially true in areas where snow piles hinder drainage.

The warmer air can also loosen deep packs of snow. This can increase the risk that snow or ice may slide off buildings.

A surge of colder air will once again follow in the wake of this storm and sea-effect snow showers will return to the coastal areas, mainly across Kansai and Chubu.

By Tuesday, the coastal areas of Tohoku and Chubu could receive up to 12 inches (30 cm) of additional snowfall with even higher amounts likely where the heaviest bands set up.

In addition to persistent snow showers through Sunday and into Monday, temperatures expected to drop below freezing during the overnight hours can cause any snow that melted to refreeze. This can lead to dangerous traveling conditions, especially where water was standing because it couldn’t drain.

This past weekend, the snow depth in the city of Toyama surpassed about 3.3 feet (1 meter) for the first time in 35 years, according to NHK, the Japanese Broadcasting Corporation.

The snow depth is a measurement of the snow on the ground through the winter season so far and is not a direct result of this storm system.

Even heavier snow fell farther to the north in Takada where an astounding snow depth of 8.2 feet (249 cm) was reported, according to the Japanese Meteorological Agency. The measurement was taken near sea level which makes the observation rather unusual. Typically, snow that deep is typically reserved for the nearby mountainous areas.

Snow depths in excess of about 10 feet (3 meters) are typically reported across some of the mountainous terrain of western Japan and have led to great ski conditions.

This unusual amount of snow in a short period of time left about 1,500 vehicles stranded on the Hokuriku Expressway in Fukui Perfection and lead to at least 10 fatalities.

Another round of sea-effect snow in December left another 1,000 vehicles stranded on a highway in Niigata.

„It is not terribly unusual to have sea-effect snow across those parts of Japan,” AccuWeather Lead International Meteorologist Jason Nicholls stated.

He added that observations from December 2020 show that snowfall was above normal for the sea-effect areas in Japan.