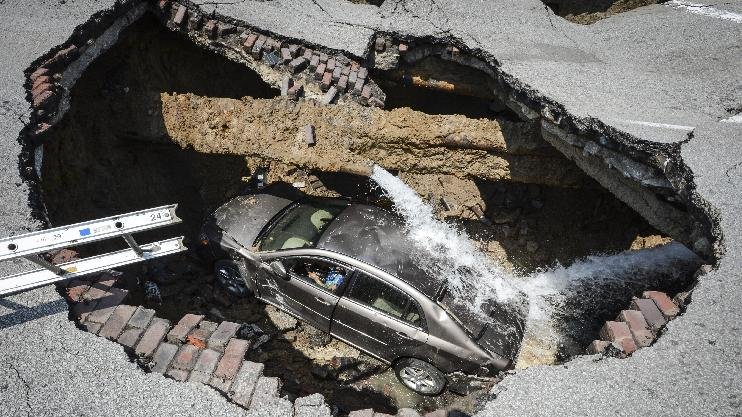 July 3, 2013TOLEDO, Ohio (AP) — A northwest Ohio sinkhole has swallowed a car traveling down a street and briefly trapped the driver, who climbed out after authorities gave her a ladder.Toledo police Sgt. Joe Heffernan says a water main break beneath the road may have caused the sinkhole Wednesday. The hole is estimated to be at least 10 feet deep.Police say driver Pamela Knox didn’t appear hurt but was shaken up and was taken to a hospital as a precaution.Heffernan says Knox saw the vehicle in front of her start to slip into the hole but drive beyond it. He says Knox couldn’t avoid it.Officials used a crane to pull the car from the hole. Repairs to the road are expected to take days. 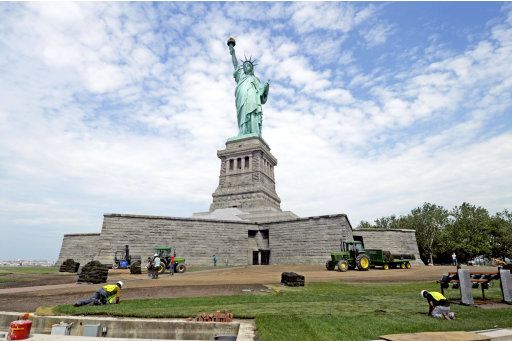 View PhotoAmerican Idol 2013 winner Candice Glover sings during a dress rehearsal for PBS’s 2013 „A Capitol Fourth” …NEW YORK (AP) — The Statue of Liberty, closed since the destruction wrought by Superstorm Sandy, will reopen to the public this Fourth of July as Americans across the country mark the holiday with fireworks and barbecues.The National Park Service was expecting a large crowd for the holiday and ribbon-cutting ceremony at Liberty Island with federal officials and New York’s mayor. Some repairs to brick walkways and docks are still underway, but much of the work has been completed since Sandy swamped most of the national landmark’s 12-acre site.The statue was spared in the fall storm, but Lady Liberty’s little island took a serious beating. Railings broke, docks and paving stones were torn up and buildings were flooded. The storm destroyed electrical systems, sewage pumps and boilers. Hundreds of National Park Service workers from as far away as California and Alaska spent weeks cleaning mud and debris.Visitors to Lady Liberty will go through security on lower Manhattan, after city officials criticized an earlier plan to screen them at neighboring Ellis Island, which endured far worse damage to its infrastructure and won’t be open to the public anytime soon. The damage to both islands was put at $59 million.New Yorkers will also be treated to the annual fireworks display over the Hudson River with performances by Faith Hill, Tim McGraw and Taylor Swift, and the Nathan’s Original hot dog eating contest on Brooklyn’s Coney Island. Joey „Jaws” Chestnut is seeking his seventh straight title — a world record. Last year he downed 68 hot dogs and buns in 10 minutes. But the Cyclone roller coaster and other attractions at the famed amusement park were closed going into the holiday after a 275-foot-tall observation tower swayed in the wind.Personal fireworks remained banned in New York and were banned in New Mexico on state lands because of wildfires.In Arizona, a carnival, parade, fireworks display and dance that draw thousands here each year will go on in Prescott but with sober tributes for 19 firefighters who died this week battling a blaze near Yarnell.Boston prepared to host its first large gathering since the marathon bombing that killed three and injured hundreds, and Philadelphia, Washington, D.C., and New Orleans planned large holiday concerts.In Washington, thousands of Americans plan to gather on the National Mall to watch a 17-minute fireworks display and listen to performances by Barry Manilow, Neil Diamond and John Williamsconducting music from the movie „Lincoln.” New Orleans was hosting the Essence Music Festivalstringing stages along the French Quarter. And Philadelphia was hosting what was billed as the „largest free concert in America,” with John Mayer, Neo and Hunter Hayes, who was filling in last-minute for a sick Demi Lovato.Not everyone was welcoming the masses — Hermosa Beach, Calif., was ramping up police patrols and making room in jails for revelers who in recent years have made the city an annual destination for celebrating independence with drunkenness and raucous behavior._Associated Press writer Christopher Weber in Hermosa Beach, Calif., contributed to this report. 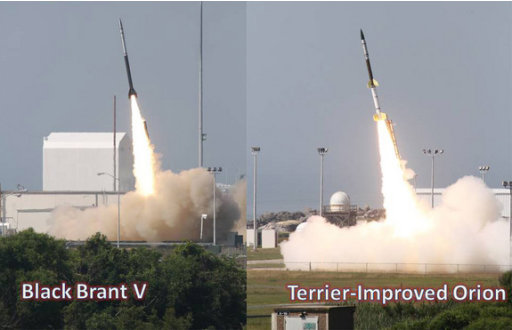 Editor’s Note: NASA successfully launch its Fourth of July rocket fireworks on July 4. Read the full story and see photos: Rockets’ Red Glare! NASA Marks Fourth of July with Double LaunchNASA is hoping to celebrate the Fourth of July with some fireworks if its own today with a double rocket launch from Virginia’s Eastern Shore. After a series of weather delays, scientists at NASA’s Wallops Flight Facility on Wallops Island, Va., will try to launch two small sounding rockets just 15 seconds apart in an experiment to study electrical currents in Earth’s atmosphere. The launches could blast off between 9:30 a.m. EDT and 11:30 a.m. EDT (1330 and 1530 GMT), weather permitting.You can watch NASA’s double rocket launch live on SPACE.com here beginning at 9:30 a.m. EDT, courtesy of Wallops officials.Today’s planned Fourth of July rocket launches are part of NASA’s Dynamo project, a mission to study the global electrical current in the Earth’s ionosphere between 30 and 600 miles (48 and 965 kilometers) above the planet’s surface.This current, also known as the dynamo, is used every day by people on Earth, NASA officials said. Radio waves are regular bounced of the ionosphere to relay signals around the world. Signals from communications and navigation satellites pass through the ionosphere, but disruptions in the atmospheric layer can distort those signals.The experiment could also help scientists determine if dynamos exist on other planets, too.”The manner in which neutral and ionized gases interact is a fundamental part of nature,” the mission’s principle investigator Robert Pfaff of NASA’s Goddard Space Flight Center in Greenbelt, Md., said in a statement. „There could very well be a dynamo on other planets. Jupiter, Saturn, Uranus and Neptune are all huge planets with huge atmospheres and huge magnetic fields. They could be setting up dynamo currents galore.”The Dynamo mission is a joint project by NASA and the Japan Aerospace Exploration Agency to launch two rockets with different instruments to monitor the electrical eddies of the ionosphere. NASA initially attempted to launch the mission on June 24 but cloudy weather prevented the flight. Since then, a series of weather issues due to clouds and high winds have delayed the launches.The larger of the two sounding rockets is a Black Brant V, a 35-foot-long (10 meters) booster that will carry a 600-pound (272 kilograms) payload to measure the neutral and charged particles it encounters in the ionosphere. The smaller booster is a 33-foot (10.6 m) Terrier-Orion sounding rocket and is built to release a long trail of lithium gas in the ionosphere. According to a NASA description, this gas will allow scientists to track wind speed variations in the Earth’s atmosphere, a key measurement since the winds are thought to drive the electric dynamo process.NASA has launched such lithium gas tracers into the upper atmosphere with sounding rockets before, but those flights have typically launched at night, when the gas can glow in the night sky and be visible by observers on the ground. [Photos: NASA Paints Night Sky Red with Rocket Launch] For today’s daytime launch, Japanese researchers and scientists with Clemson University in South Carolina invented a new technology that uses the lithium trails as a tracer that can be tracked in daylight by cameras equipped with special filters. A NASA aircraft will also monitor the Dynamoexperiment from the air to collect more observations above the haze and cloud layers, NASA officials said. Both sounding rockets can reach suborbital space 100 miles (160 km) above Earth, but are not powerful enough to enter orbit. Each flight will last about five minutes from liftoff to re-entry. While NASA will webcast the attempted launches of the Dynamo mission, the liftoffs should also be visible to local observers at the Wallops Flight Facility and its surrounding area.  The facility’s Visitor Center will be open at 8 a.m. EDT for members of the public. You can find directions to the NASA Visitor Center at Wallops here.Editor’s note: If you live near NASA’s Wallops Flight Facility and snap a photo of the Dynamo rocket launches that you would like to share for a possible story or image gallery, please send images and comments to managing editor Tariq Malik at spacephotos@space.com.Email Tariq Malik at tmalik@space.com or follow him @tariqjmalik and Google+. Follow us@Spacedotcom, Facebook and Google+. Original article on SPACE.com. 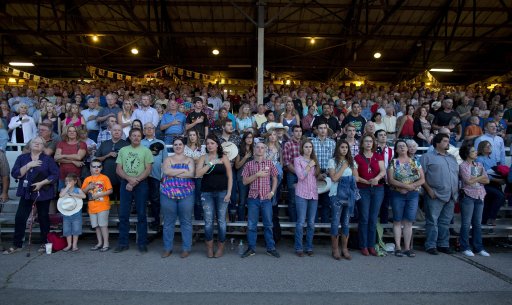 View PhotoThe crowd stands for the national anthem before the start of the Prescott Frontier Days rodeo, Wednesday, …

View PhotoLynn Paupore walks along the makeshift memorial with her grandson Bradley Richtig, 5, and granddaughter … 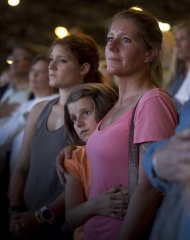 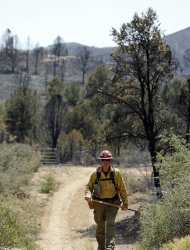 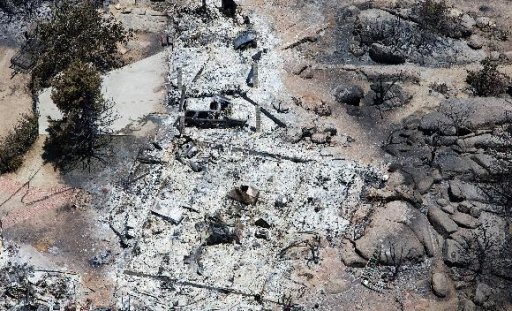 View PhotoJim Karels, an investigator from the Florida Forest Service speaks to reporters after he arrived in Yarnell, …

View PhotoFirefighter Brendan McDonough embraces a mourner near the end of a candlelight vigil in Prescott, Ariz. …

View PhotoMike Dudley, an investigator with the U.S. Forest Service, speaks to reporters after he arrived in Yarnell, …PRESCOTT, Ariz. (AP) — There will be fireworks in the Arizona town still reeling from the deaths of 19 firefighters.Officials and residents in Prescott remain in mourning after the tragedy at the Yarnell wildfire. But they insist the city’s longstanding tradition of over-the-top celebrations and fireworks will go on in a tribute to the lives lost.Though much of the southwest remains a tinderbox, fire officials say they will be able to deploy the pyrotechnics safely, pouring water on the detonation area if necessary.Meanwhile, a team of safety experts will begin examining the tragedy for signs of what went wrong.Nearly 600 firefighters continue to fight the blaze, which has burned about 13 square miles. Hundreds remain evacuated and at least 129 homes have been destroyed. 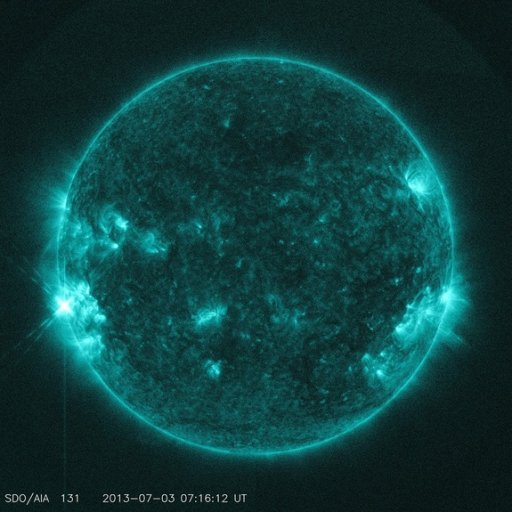 View PhotoThe sun unleashed an M1.5-class solar flare (lower left) on July 3, 2013, a solar fireworks to the traditional …The sun fired off an intense solar flare Wednesday (July 3), givingNASA scientists a solar preview to the Fourth of July holiday in the United States.The solar flare erupted at about 3 a.m. EDT (0700 GMT) and was spotted by NASA’s Solar Dynamics Observatory, which snapped aphoto of the July solar storm.”Just a few minutes after 7:00 UT, the sun produced an M1.5-class solar flare. Perhaps an early Fourth of July fireworks?” SDO mission officials wrote in a Facebook post announcing the flare. M-class solar flares are medium-strength solar storms that can supercharge Earth’s northern lights displays when they are aimed atEarth. NASA officials reported that the July 3 solar flare erupted from a point just over the eastern side, or limb, of the sun, so it was not directed at our planet. The most powerful type of solar flares are X-class sun storms. When aimed directly at Earth, X-class flares can pose a threat to astronauts in space, interfere with satellite signals and potentially affect electrical power grids on Earth. Wednesday’s flare followed close on the heels of a dazzling sun eruption on Monday (July 1), which sent a tendril of super-hot solar plasma dancing over the surface of the star. The SDO spacecraftcaptured a video of that solar prominence, as scientists call the events, in spectacular detail.The sun is currently in the middle of an active phase of its 11-year solar weather cycle. The current weather cycle, known as Solar Cycle 24, is expected to reach its peak this year.NASA’s SDO spacecraft is one of several spacecraft monitoring the sun to track solar flares, plasma eruptions and other space weather phenomena. The $850 million observatory stares at the sun continuously to create spectacular high-definition videos of solar weather in different wavelengths of light.Email Tariq Malik at tmalik@space.com or follow him @tariqjmalik and Google+. Follow us @Spacedotcom, Facebook and Google+. Original article on SPACE.com.