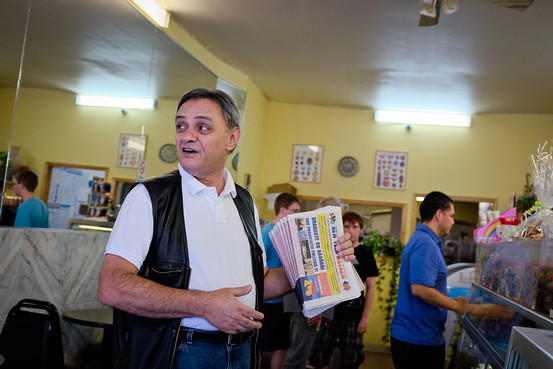 Ramsay de Give for The Wall Street Journal

Down a tight stairwell and under a low basement ceiling inside his Queens rental, Grigore Culian operates one of the few remaining Romanian language newspapers in the country.

Mr. Culian is the publisher, editor, advertising manager and distributor of New York Magazin, a 2,000-circulation publication that has brought Romanian news to New York since 1997.

“This is where it all happens,” Mr. Culian said of the wood-paneled basement of his Middle Village apartment, where a flat-screen television plays 24-hour news from a channel in Bucharest.

On Wednesdays, Mr. Culian, 61 years old, stacks boxes filled with about 2,000 papers into the back of his car, then spends about six hours driving around Queens, delivering the periodicals to bakeries, restaurants, and other businesses with Romanian-American clientele. He also mails newspapers to all of his subscribers, and ships hundreds more to distributors throughout the United States, he said.

“People say, ‘This guy’s crazy! How the hell is he doing it?’ But I am proof that this thing is for real,” Mr. Culian said. 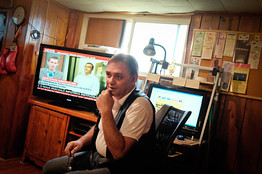 Ramsay de Give for The Wall Street Journal
Grigore Culian photographed in his home office in Middle Village.

In 2000, there were more than a dozen Romanian language print newspapers in the United States, according to Steven Bonica, president of the Romanian -American Network, a non-profit organization that provides outreach to Romanian communities in the U.S. But now, he said, only six remain, including ones in Chicago, Portland and Mr. Culian’s— and he is struggling to keep the publication afloat.

One-man publications were the standard mode of operation in the American colonies during the 1700s, according to Michael Schudson, a professor at Columbia University, who is an expert on the history of American newspapers. That trend tapered off after 1820s, Mr. Schudson said, but has seen a revival due to the emergence of online media.

In the early 1980s, Mr. Culian played bass guitar in a popular Romanian band called the Romantics. Doina Uricariu, a Romanian-born poet and writer living in New York, remembered Mr. Culian as a “very handsome, polite man” whom people would recognize on the streets of Bucharest. But Mr. Culian grew frustrated with a Communist regime that he said pressured musicians into playing only Romanian songs. He said he obtained a U.S. Visa and, in 1989, flew to New York with little money and just a small bag of belongings.

Mr. Culian lived at his sister’s house in Long Island and worked several jobs —including as a school bus driver and waiter—to support his wife and daughter, who joined him soon after. He took a job translating and proofreading for a Romanian-language newspaper, but when the owner died unexpectedly, the newspaper folded, Mr. Culian said.

That was when Mr. Culian’s daughter, Andreea, then a sophomore at New York University, encouraged him to launch his own newspaper.

Despite feeling “completely lost” at first and coming off of a bankruptcy in the early 1990s, Mr. Culian said he worked 16 hours a day and learned all he could about the newspaper business, even taking a publishing management course. Soon, he was able to accumulate enough advertising revenue to remain viable and even turn a small profit, he said.

Mr. Culian publishes news about both Romanian and American current events, and maintains contributors in both countries, many of them anti-Communist intellectuals and journalists who provide reporting, analysis, and opinion. And there is demand for news about Romania in the New York City region, which had the nation’s largest Romanian-born population of any metropolitan area covered by the U.S. Census Bureau’s American Community Survey, with 24,093 in 2011. 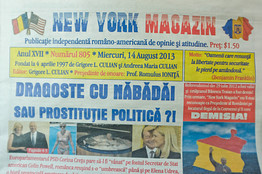 The business isn’t easy. Mr. Culian filed for bankruptcy again in 2010, this time due to a sharp drop in ad revenues, he said. And this summer, he scaled back publication to once every other week.

Still, his devotion has won him accolades. Aurel Sasu, literary critic and journalism professor at the University of Cluj in Romania, asked Mr. Culian to donate the archives of New York Magazin, which he said has “changed the paradigm of Romanian journalism,” to the university’s library.

“We don’t have this type of newspaper in Romania,” Mr. Sasu said, referring to a Romanian press that he maintains is largely controlled by political parties. And with many Romanian-American newspapers having closed in the past two decades, New York Magazin is “the most important newspaper in the community,” he said.

Administrators in Romania manage an online edition of New York Magazin. Mr. Culian said that about 200 people subscribe to his print edition, at a cost of $75 for 25 issues. The paper sells in stores for just $1.50 – 50 cents of which is retained by the store, he said. His correspondents are all volunteers because “they know we are not rich and I cannot afford to pay,” Mr. Culian said.

Mr. Culian was honored recently at the Romanian Cultural Institute in New York as part of the release of “New York Magazin—The Annotated History of a Romanian Journal (1997-2012).” About 50 people attended the event, including the book project’s coordinator, Mr. Sasu, who spoke passionately about New York Magazin’s importance to the Romanian community worldwide. The evening included a panel discussion and a photographic exhibit of Mr. Culian’s life, both as a journalist and musician.

Flipping through the book recently in his basement, Mr. Culian admired pictures of himself with celebrities and dignitaries, like former Secretary of State Hillary Clinton, but there was one photo of which he was most proud. It was of he and Andreea, who was dressed in a cap and gown on the day she earned her Master’s degree in Global Affairs from New York University. The real reason he defected from Romania, he said, was to “guarantee a future for her.” And these days, he boasted, she works at a research organization in Washington D.C.

Sign up for a daily digest of our Greater New York coverage.