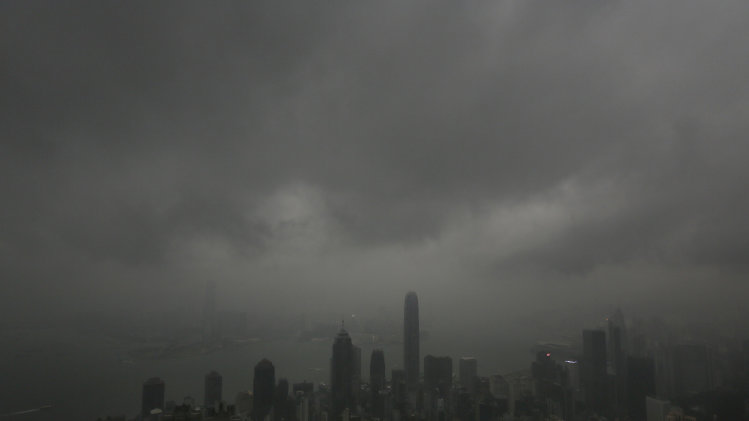 KELVIN CHAN 28 minutes ago HONG KONG (AP) — The year’s most powerful typhoon slammed into southern China, forcing hundreds of flight cancellations, shutting down shipping and putting a nuclear power plant on alert after pummeling parts of the Philippines and Taiwan.Typhoon Usagi veered away from Hong Kong at the last minute before striking the mainland northeast of the former British colony.Usagi — Japanese for rabbit — was classified as a severe typhoon and had sustained winds of 175 kilometers (109 miles) per hour, with gusts of up to 213 kph (132 mph), when it hit land Sunday evening.The storm had been a super typhoon on Saturday when it passed through the Luzon Strait separating the Philippines and Taiwan, a path likely sparing both places from the most destructive winds near its eye.In the Philippines, Usagi left at least two people dead and two others missing, while in Taiwan nine people were hurt by falling trees.View gallery.” 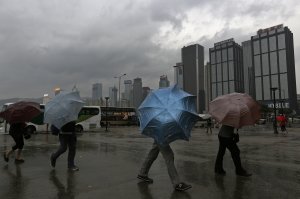 Tourists from mainland China brave strong wind near the waterfront in Hong Kong Sunday, Sept. 22, 20 …The typhoon landed near the city of Shanwei in the Chinese province of Guangdong, about 140 kilometers (87 miles) northeast of Hong Kong, and was moving west-northwest at 22 kph (14 mph), the Hong Kong Observatory said late Sunday.Ferry services between Hong Kong and nearby Macau and outlying islands were suspended as the observatory reported winds as strong as 68 kph (42 mph) and warned that a storm surge and heavy rains could cause flooding in low-lying areas.Police in Shanwei ordered more than 8,000 fishing boats to return to port and more than 1,200 residents were taken to temporary shelters, China’s official Xinhua news agency reported.The typhoon wreaked havoc on airport schedules in Hong Kong, nearby Macau and mainland China, upsetting travel plans for many passengers who were returning home at the end of the three-day mid-autumn festival long weekend.Hong Kong International Airport said 370 arriving and departing flights were canceled and another 64 delayed. Two of Hong Kong’s biggest airlines, Cathay Pacific Airways and Dragonair, canceled flights to and from the city’s airport starting at 6 p.m. Sunday, with plans to resume operations Monday if conditions permit.View gallery.” 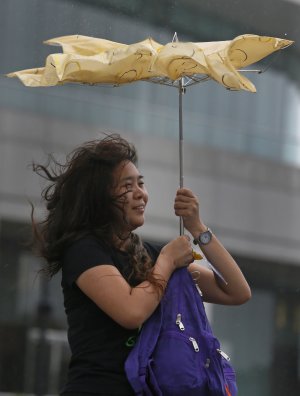 A tourist from mainland China braves strong wind near the waterfront in Hong Kong Sunday, Sept. 22,  …Beijing-based Air China scrubbed 148 flights to and from Hong Kong, Macau and five nearby mainland cities. China Southern Airlines, based in Guangzhou, canceled all flights to and from Hong Kong and three mainland airports, Xinhua said.Fujian province suspended shipping between mainland China and Taiwan, the news agency said.Authorities in Guangdong initiated an emergency response plan for the Daya Bay nuclear power station northeast of Hong Kong as Usagi approached, ordering four of six reactors to operate at a reduced load, Xinhua said.In Taiwan, more than 3,300 people were evacuated from flood-prone areas and mountainous regions. Rail service was restored Sunday on a rail line that had been buried by a landslide.Another landslide late Saturday in the southeastern hot springs resort village of Chihpen sent mud and rocks crashing through the ground floor of a resort spa, forcing the evacuation of frightened guests. The Chihpen River breached its levies upriver, turning the village’s main street into a rock-strewn stream, flooding homes and damaging vehicles.View gallery.” 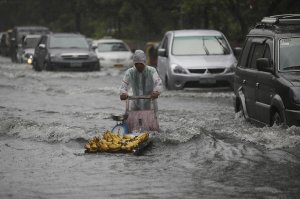 A Filipino banana vendor crosses a flooded street as southwest monsoon rains enhanced by Typhoon Usa …In the Philippines, two people drowned and two went missing when a passenger boat capsized in rough waters off northeastern Aurora province, the Office of Civil Defense said Saturday. Nine passengers and crew were rescued.The typhoon set off landslides and flooded parts of six Philippine provinces, but additional casualties were not reported.___Associated Press writer Jim Gomez in Manila, Philippines, contributed to this report.US Navy searches for 2 sailors after chopper crash 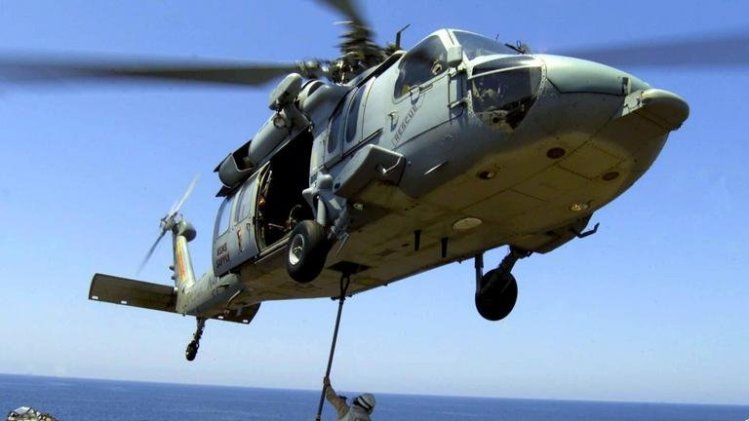 View gallery
This US Navy photo received 26 March 2004, shows a US Marine aboard the amphibious assault ship USS Wasp as a sling is lifted to an MH-60S Knighthawk helicopter. A US Navy helicopter crashed into the Red Sea on Sunday and the fate of five crew members „is still being determined,” the military said. (AFP Photo/Jemssy Alvarez Jr.)

4 hours ago WASHINGTON (AFP) – A US Navy helicopter crashed into the Red Sea on Sunday and a search is underway for two of the five crew members, the military said.The MH-60S Knighthawk was flying with the guided missile destroyer USS William P. Lawrence, part of a carrier group dispatched to the region to increase pressure on Syria.The US Fifth Fleet said the helicopter was not downed by enemy fire, but ditched into the sea.Three of the crew members were „accounted for and stable,” said the US Fifth Fleet, which oversees naval operations in a wide area along the Gulf, the Red Sea, the Gulf of Oman and parts of the Indian Ocean.In a statement, it said six ships, several helicopters and airplanes were involved in the search and rescue effort for the two missing crew members.”The crash was not due to any sort of hostile activity,” US Naval Forces Central Command, which shares a commander and headquarters with the Fifth Fleet, said in a statement.”The incident is under investigation.”The ships involved in the search and rescue effort are the USS William P. Lawrence, USS Nimitz, USS Princeton, USS Shoup, USS Stockdale and USNS Rainier.The Nimitz and its escorts recently finished a deployment in the Gulf and were diverted to the Red Sea as US vessels deploy off Syria to support possible strikes against Bashar al-Assad’s chemical-armed regime.