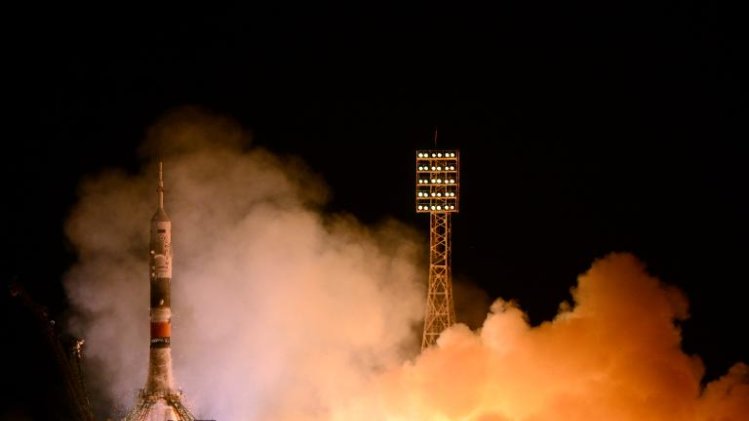 1 hour agoBaikonur (Kazakhstan) (AFP) – An American and two Russians blasted off Thursday for the International Space Station atop a Soyuz rocket that will slash more than a day off the usual travel time.Michael Hopkins of NASA and Oleg Kotov and Sergei Ryazansky of Russia took off without a hitch from the Baikonur space centre that Moscow leases from Central Asia’s ex-Soviet republic of Kazakhstan.”Everything went according to plan. Everything went as expected,” NASA’s official flight commentator announced via a web feed after the Soyuz reached orbit about 10 minutes into its flight.The capsule will only orbit the Earth four times as opposed to the usual 30 under a technique originally devised in the Soviet era but only adopted on a regular basis in the past year.Scientists and space travellers had long weighed the benefits of such a sprint run.The longer flight allows crew members to get better acclimated to the stresses of space while also testing their physical endurance — the ride takes a full 48 hours.The shortcuts were abandoned after a few trial runs by the Soviet Union because one cosmonaut because so violently ill during the voyage that mission control at one point feared for his life.But two such quick trips were successfully completed earlier this year and Russia decided to repeat the experience with a view to making them standard for future travel to the ISS.The latest mission will be highlighted by the expected November 7 stopover on the ISS of a torch — left unlit for safety reasons — used during the relay ceremony for the 2014 Olympic Winter Games that Russia will be hosting in the port city of Sochi.The new team will be joining Russian commander Fyodor Yurchikhin and his two flight engineers — Karen Nyberg of NASA and Italian Luca Parmitano of the European Space Agency.The four-month stay of those three has been more eventful than they might have liked.View gallery.” 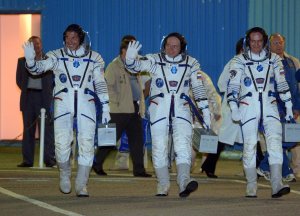 L-R: Members of the International space crew, American astronaut Michael Hopkins and Russian cosmona …Parmitano suffered a scare during a spacewalk on July 16 when his helmet began to fill with an unidentified liquid.”I feel that the temperature of the liquid is too cold to be sweat and above all I have the distinct sensation it is increasing in volume,” Parmitano later wrote in a gripping present-tense account of the incident in a post on the European Space Agency website.He described being blinded and suffocated as he struggled to make his way back to the airlock.The Italian — on only his second spacewalk — said communications were also breaking apart as the water began covering his headphones and he struggled to hear instructions from NASA mission control in Houston.NASA is probing whether the leak may have come from the liquid cooling ventilation system in the spacesuitRussia meanwhile is struggling to prove to the world’s other spacefaring nations that its mostly Soviet-designed systems are reliable enough to continue humans’ conquest of space.The 2011 retirement of the US Space Shuttle programme made Soyuz the world’s last remaining manned link with the ISS.But Russia has been recently blighted by a growing string of space failures that include the July 2 explosion shortly after takeoff from Baikonur of an unmanned Proton-M rocket.The accidented prompted Russian Prime Minister Dmitry Medvedev to formally reprimand Russian Space Agency (Roscosmos) chief Vladimir Popovkin — a signal that his job was not safe.The trio already in space who will be joined by the latest crew are due to return to Earth on November 11 and leave Kotov as commander of the expedition.The Soyuz TMA-10M capsule is scheduled to dock to the ISS at 0248 GMT. 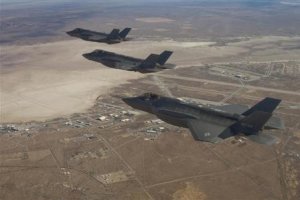 View gallery Three F-35 Joint Strike Fighters (rear to front) AF-2, AF-3 and AF-4, can be seen flying over Edwards … By Joyce Lee and Ju-min Park SEOUL (Reuters) – South Korea’s decision to reject a bid by Boeing to supply 60 warplanes and to re-issue a tender was made in the interests of better technology but may not be justified given North Korea’s weak air capabilities, experts said on Wednesday.Lockheed Martin’s F-35A, previously considered too expensive, has shot to the front of the race for a multi-billion dollar deal after the Defence Ministry singled out a fifth-generation fighter as the preferred option.Boeing’s F-15 Silent Eagle, the only bid within budget, had been poised to win the 8.3 trillion won ($7.7 billion) tender. But former military top brass and ruling party legislators had criticized the aircraft for lacking stealth capabilities.But the air power of old rival North Korea was, by itself, not enough to warrant scrapping the tender in favor of stealth capability, experts said.”It should not be hard to get air superiority against North Korea using conventional fighters because the air force is basically grounded, their pilots don’t have any experience, and their air defense is from the 1950s,” said Markus Schiller, senior analyst at Munich-based Schmucker Technologie.”The capability that they get with the F-15 would be sufficient.”The North Korean air force operates a fleet of more than 1,300 aircraft, most of them Soviet-era models, the U.S. Department of Defense wrote in a report to Congress in 2012.The North’s most capable combat aircraft are its MiG-29s, one of which appeared as the backdrop in a photograph of North Korea’s young leader, Kim Jong-un, posing with some soldiers last year.MiG-21 and MiG-23 jets make up most of the rest of North Korea’s fleet of about 400 aircraft, according to intelligence estimates.In contrast, South Korea had about 1,420 aircraft as of January 2012, with about 220 F-15Ks and F-16s as its main fighter jets.But with North Korea’s possible nuclear weapons a constant concern after three nuclear tests, the latest in February, supporters of the decision to re-issue the tender say the very presence of stealth jets can deter the North.”Possession of stealth fighters can only apply pressure to North Korea,” said Lee Han-ho, a former air force chief of staff between 2003 and 2005.QUICK TURNAROUND NEEDED-Some defense experts also say that advanced fighters are needed not only to check North Korea. Japan is acquiring F-35s and China is developing J-20 stealth fighters.Also, South Korea is due to take operational control of its forces from the United States in 2015, meaning it must consider ways to lessen its dependence on U.S. air power in the long term.A main concern of the leadership of South Korea’s air force has been delays that could cause a substantial gap in the country’s air power before jets from the re-issued tender arrive.South Korea’s arms procurement agency, the Defense Acquisition Program Administration, had estimated that any delay in the tender process could leave the air force 100 fighters short of the 430 deemed necessary by 2019.The Defence Ministry said on Tuesday it expected to complete the new purchase in about a year, keeping to the scrapped tender’s timetable of a 2017 first delivery date.But South Korea faces some hurdles before it can relaunch a tender and choose a winner within a year, including getting parliament’s approval for next year’s roughly 730 billion won budget, which is earmarked for the program.If the budget is not secured and the winner is not chosen by next year, first delivery in 2017 could be a tall order.Previous experience in South Korea suggests it can take about three years for a winning bidder to build and deliver the first batch of „next-generation” fighter jets.In the country’s first high-class jet tender, which the Boeing F-15K won in 2002, it took three years for the first delivery, in 2005. The second high-class jet tender, awarded to Boeing F-15K again, in 2008, only took two years until delivery because the production lines already existed, experts say.Lockheed Martin officials were not immediately available for comment on their delivery capabilities.South Korea said on Tuesday it would consider all options including buying a mix of different models when reframing the tender in order to minimize the gap in combat capabilities.”Going through the entire process in a year is not impossible, but the top brass will have to cut through a lot of red tape,” said Yang Uk, a senior research fellow at the Korea Defence and Security Forum.”There is a concern that legally needed steps might not get the full attention they deserve.”(Additional reporting by James Pearson; Editing by Robert Birsel)