Divers find remains near Concordia; DNA tests to see if they are victims of Italian shipwreck

By The Associated Press | The Canadian Press – 3 hours ago 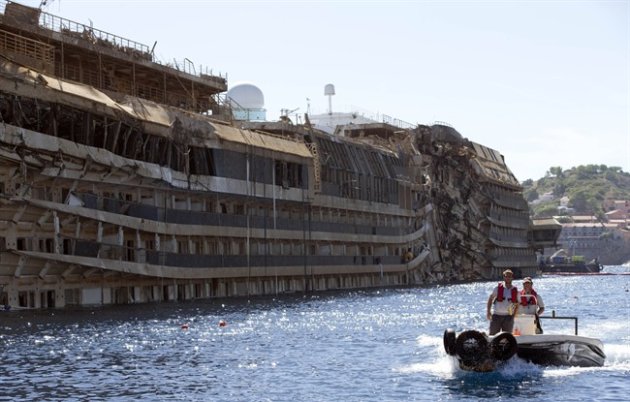 The Canadian Press – People take a small boat past the damaged side of he Costa Concordia on the Tuscan Island of Giglio, Italy, Wednesday, Sept. 18, 2013. The crippled cruise ship was pulled completely upright …more

Play VideoConcordia Success Boosts Pride for Shamed ItalyAP Canada  1:17ROME – Divers have spotted human remains near the shipwrecked Costa Concordia off an Italian island, and authorities say DNA tests will determine if they are those of two victims whose bodies were never found.The search for the last of the 32 dead resumed after the capsized cruise liner was rotated upward last week in a salvage operation 20 months after the Concordia crashed into a reef off Giglio Island on Jan. 13, 2012. Civil Protection chief Franco Gabrielli told reporters on Giglio that relatives of the two victims — a female Italian passenger and a male Indian waiter — were notified after divers saw remains Thursday morning.The remains were spotted in the sea near the central part of the ship, where survivors had said the two were last seen.

View Photo A TSB report says an electrical blackout on the Beaumont Hamel caused it to crash …A man who was injured when the Beaumont Hamel ferry crashed into the dock in Portugal Cove last year says he still suffers pain since the accident.The Transportation Safety Board concluded a failure to fix recurring electrical problems on the ferry contributed to the collision in May 2012.According to the TSB, the Bell Island ferry crashed into the dock after an electrical blackout. Rather than docking, an electrical contractor on board troubleshot the issue when it happened.Keith Sweeney was sitting in his car on the ferry when the vessel struck the dock. The force of the impact jolted his parked car and he rear-ended the car in front of him.He said since the accident he wakes up each morning with a headache.”I’m still going through acupuncture for it now and massage therapy,” Sweeney said. „I’ve got problems with my neck ever since.”After learning of the TSB report, Sweeney said the incident could have been prevented.”We all got pitched around and tossed around. What they need to know is that if you get a problem, solve it — don’t just jerry-rig it. Fix it,” he said.There were already eight other failures with the Beaumont Hamel on record with the board before the collision, but the TSB said even more cases went unreported.Investigators also cited public pressure to keep ferries sailing on a regular basis as a safety issue.Sweeney’s wife Kathleen said the TSB’s suggestion that government knew about the problems with the ferry is troubling.”If you are going to fix a problem, fix it — don’t give it a Band-Aid and let it persist. Aren’tpeople’s lives in Newfoundland worth it?” she said.”I don’t know if they’re concerned about our safety or just the almighty dollar.”However, the Tory MHA for the area, David Brazil, said the province has learned a lot about the problems with the vessel since the incident and has ensured the ferry is in proper working condition before allowing it back in service.”After that, then it was said, ‘Look, nothing moves until we really evaluate how this has to be done,’ ” Brazil said.”We spent an exorbitant amount of money to make sure safety was the primary objective and that’s what we’ve done, and since then everything has been working the way that it should.”The Beaumont Hamel was out of commission for more than seven weeks, and the dock was also damaged in the collision. 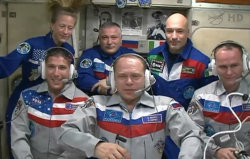 MOSCOW (AP) — A Soyuz capsule carrying three astronauts successfully docked with the International Space Station early Thursday, bringing the size of the crew at the orbiting outpost to six. The new crew’s six-month mission will include a spacewalk with the Olympic torch.American Michael Hopkins and Russians Oleg Kotov and Sergei Ryazansky traveled six hours in the capsule from the Russian-leased launch pad in Kazakhstan before linking up with the space station’s Russian Poisk research module at 6.45 a.m. Moscow time (0245GMT).Kotov is the most experienced member of the crew with two previous six-month missions in space under his belt, while Hopkins and Ryazansky are both on their first missions.The incoming crew entered the station nearly two hours after the docking, where they were welcomed by Russia’s Fyodor Yurchikhin, NASA’s Karen Nyberg and Italy’s Luca Parmitano, who have been on the orbiting lab since May and will be…

Peru rescues man trapped in mine after 7.0 quake, no deaths Reuters 11 hrs ago LIMA (Reuters) – Authorities in Peru said they rescued a man trapped in a mine on Wednesday after a 7.0-magnitude earthquake shook the coast – causing landslides, damaging homes and schools and injuring at least 17 in rural provinces.The man had suffered multiple traumatic injuries and was being treated, said a preliminary report published online late on Wednesday by Peru’s civil defense institute.The report mentioned no deaths resulting from the quake, which the U.S. Geological Society said was a magnitude 7.0.Earlier on Wednesday local officials said three people died after collapses occurred in make-shift mines, which operate largely outside of the law. Those deaths were not confirmed.At least seven people were injured at various small mining sites in Peru’s southern region, the civil defense report said.The quake, which struck near Peru’s southern coast a few minutes before midday on Wednesday, damaged at least 70 homes and…