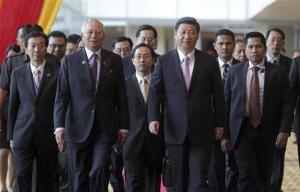 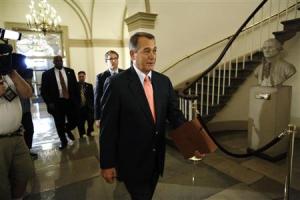 View gallery U.S. House Speaker John Boehner (R-OH) arrives at the U.S. Capitol in Washington, October 5, 2013. REUTERS/Jonathan …By Caren Bohan and Andy Sullivan WASHINGTON (Reuters) – Republican House Speaker John Boehner vowed on Sunday not to raise the U.S. debt ceiling without a „serious conversation” about what is driving the debt, while Democrats said it was irresponsible and reckless to raise the possibility of a U.S. default.”The nation’s credit is at risk because of the administration’s refusal to sit down and have a conversation,” Boehner told ABC’s „This Week,” adding that there were not enough votes in the House of Representatives to pass a „clean” debt limit bill, without any conditions attached.Asked if that meant the United States was headed towards a default if President Barack Obama does not negotiate, Boehner said: „That’s the path we’re on.”Boehner’s comments appeared to mark an escalation since earlier in the week when he was reported to have told Republicans privately that he would bring a vote to the floor on a clean debt limit bill if necessary to avoid a default.Republicans and Democrats also traded blame for a shutdown that has brought much of the government to a standstill for nearly a week. With no end in sight, the battle over funding the government looks like it will merge with the one over the debt ceiling, which must be raised by October 17 to avoid default.Republicans are seeking concessions in exchange for raising the nation’s $16.7 trillion debt limit. If the borrowing cap is not increased, the United States could go into default, with what officials and economists say would be seriously damaging consequences for the U.S. and global economies.Treasury Secretary Jack Lew warned of serious consequences „if we were to have the unthinkable happen, to have the United States default.””It is irresponsible and it is reckless to take that chance, which is why Congress needs to act,” he told Fox News.Pressed on Obama’s vow not to negotiate over the debt limit, Lew said: „The president has always been looking for a way to negotiate, to find that reasonable middle ground, with a bipartisan group of members and senators to do the right thing for the American people … He put out a budget that actually took an enormous step to do that. So the president is open to negotiation. The question about the debt limit is different.”Senator Ted Cruz, who has been the standard-bearer for Republican opposition to funding the government without measures to undercut Obama’s landmark 2010 healthcare reform, also known as Obamacare, told CNN that Congress frequently in the past had attached curbs on spending to votes to raise the debt ceiling.On this occasion, he said, Republicans were looking for three things before raising the debt ceiling: a significant structural plan to reduce government spending, no new taxes, and measures to „mitigate the harm from Obamacare.”Democrats vow not to negotiate on the funding bill or the debt ceiling, arguing that it is the job of Congress to pay its bills.Democratic Senator Charles Schumer told ABC’s „This Week” he did not believe Boehner would let the nation go into default, as it would lead to chaos on financial markets, freeze lines of credit and cause a jump in interest rates.”I believe Speaker Boehner will not do that when push comes to shove,” Schumer said, adding that Boehner and Republicans would be forced „sooner or later” to stand up to the „hard right” in their party and give in. „They will have to back off.”View gallery.” 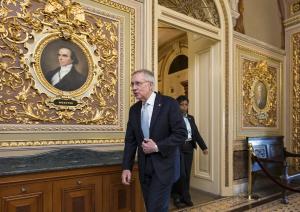 With the government shutdown still unresolved, Senate Majority Leader Harry Reid, D-Nev., leaves the …Obama and the Democrats say bills to fund the government and raise the debt ceiling could be resolved quickly if Boehner permitted votes on simple, no-strings-attached measures in the Republican-controlled House.Asked about reports that around 20 House Republicans have said they would join some 200 Democrats in voting for such a bill – enough to pass it – Boehner told ABC that there were not enough votes in the chamber to pass such a bill.Republicans have demanded that Democrats agree to delay implementation of Obamacare as part of any spending bill.The law aims to provide health insurance to millions of Americans without coverage. Republicans argue it is a massive government intrusion into private medicine that will cause insurance premiums to skyrocket, put people out of work and eventually lead to socialized medicine.‘DO THE RIGHT THING’-The shutdown started on Tuesday and initially idled as many as 800,000 federal workers, shuttering all but essential government operations.The Pentagon said on Saturday it would recall the vast majority of some 350,000 civilian Defense Department employees sent home during the shutdown, easing the pain of the stalemate for some.The announcement came as Democrats and Republicans in the House agreed to pay all furloughed employees retroactively once the government reopens.Talk of using broader budget deals to end the standoff has picked up in recent days, but without any visible results.In an interview with CNN, Lew repeatedly declined to say what would happen if Congress failed to raise the debt ceiling by the time the Treasury Department exhausts its borrowing authority later this month.Some Republicans have argued that the U.S. government would be able to continue to service its debt even if it did not have enough money to pay all of its bills. Lew declined to say whether that would be the case, but he argued that it would be just as bad if it missed other obligations like Social Security pension payments or Medicare payments to hospitals and doctors.”There is no option that prevents us from being in default if we don’t pay our bills,” he told CNN’s „State of the Union.”Lew said the Obama administration has determined that legally it does not have the authority to raise the debt ceiling on its own, as some Democratic lawmakers have suggested.”There’s a desire here for there to be some kind of a magic solution. There’s an easy solution: a majority in Congress would do the right thing if given a chance to open the government. A majority in Congress would do the right thing if given a chance to let us pay our bills.”(This story was refiled to replace „risk” with „refusal” in the second paragraph)(Reporting by Toby Zakaria, Bill Trott, Paul Simao, Tom Ferraro, Richard Cowan, Phil Stewart; Writing by Claudia Parsons; Editing by Paul Simao)