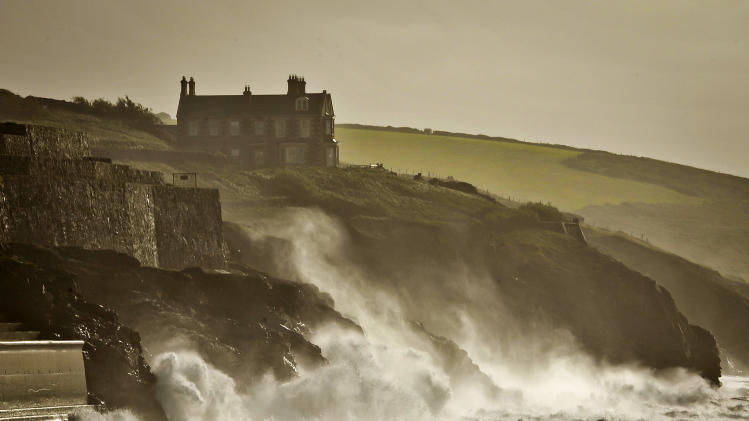 LONDON (AP) — Britain is taking precautions for a storm that is expected to hit the country with heavy rain and hurricane-force winds.Forecasters say the storm will arrive in the southern half of the U.K. on Sunday, a day of major sports events, including a regular NFL game between the San Francisco 49ers and Jacksonville Jaguars at Wembley Stadium in London.Prime Minister David Cameron told government agencies to ensure that contingency plans are made for transportation, schools and power supplies during the storm, which could have gusts stronger than 80 mph (128 kph).The storm is expected to move across the country and head out over the North sea by Monday afternoon. Britain’s Met Office said it could cause widespread and severe disruption from falling trees, power cuts and flooding.

Britain braces for worst storm in a decade 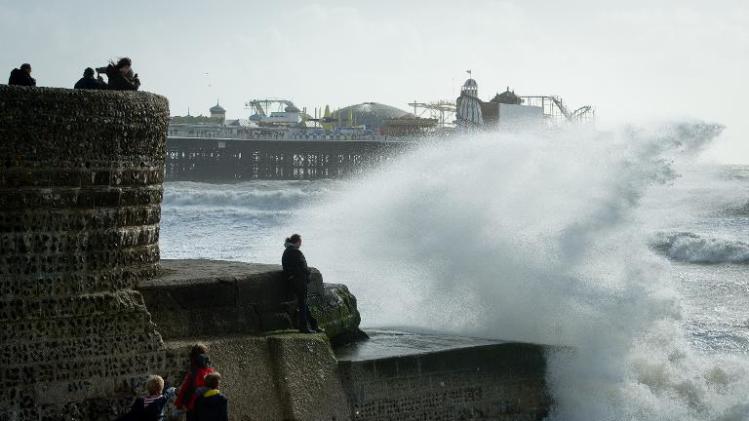 London (AFP) – Britain was braced on Sunday for its worst storm in a decade, with heavy rain and winds of more than 80 miles (130 kilometres) an hour set to batter the south of the country.The Met Office national weather centre warned of falling trees, damage to buildings and disruption to power supplies and transport when the storm hits overnight to Monday.Between 20 and 40 millimetres (0.8 to 1.6 inches) of rain is predicted to fall within six to nine hours starting on Sunday evening, with a chance of localised flooding.It will be followed by widespread gusts of 60 to 70 miles an hour across southern England and south Wales on Monday, with winds reaching more than 80 miles an hour in some areas, forecasters say.The Met Office issued an „amber” wind warning for the region, the third highest in a four-level scale, and urged people to delay their Monday morning journeys to work to avoid the worst of the bad weather.View gallery.” 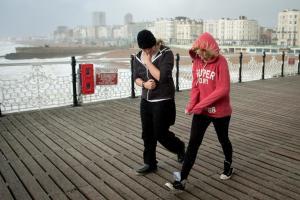 Strong winds blow two girls as they walk on Brighton pier on the seafront as a predicted storm start …Britain last experienced similar wind strengths in March 2008, but forecaster Helen Chivers told AFP the expected damage was more comparable with a storm seen in October 2002.Prime Minister David Cameron received an update from officials on contingency planning in a conference call on Sunday, amid fears of similar damage wrought by the „Great Storm” of October 1987.That left 18 people dead in Britain and four in France, felled 15 million trees and caused damages worth more than Â£1 billion ($1.6 billion or 1.2 billion euros at current exchange rates) as winds blew up to 115 miles an hour.Martin Young, chief forecaster at the Met Office, said: „While this is a major storm for the UK, we don’t currently expect winds to be as strong as those seen in the ‘Great Storm’ of 1987 or the ‘Burns Day storm’ of 1990.”This weather system is typical of what we expect to see in winter but as it’s coming in during autumn — when trees are in leaf — and while the ground is fairly saturated, it does pose some risks.View gallery.” 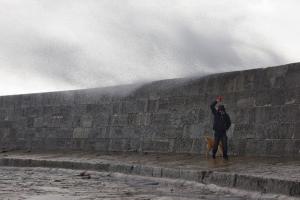 A man walks his dog along a sea wall in Lyme Regis in Dorset, southwest England on October 27, 2013  …”We could see some uprooted trees or other damage from the winds and there’s a chance of some surface water flooding from the rainfall — all of which could lead to some disruption.”Veteran weather forecaster Michael Fish also said Sunday’s storm was unlikely to be as severe as 26 years ago, although his comments will be taken with a pinch of salt in Britain.Fish was the BBC’s main television weatherman in 1987 but famously denied that a major storm was on its way just hours before it hit.This year’s storm has been named St Jude after the patron saint of lost causes, whose feast day is on Monday.It is likely to affect northern France before heading off towards Denmark, forecasters said. 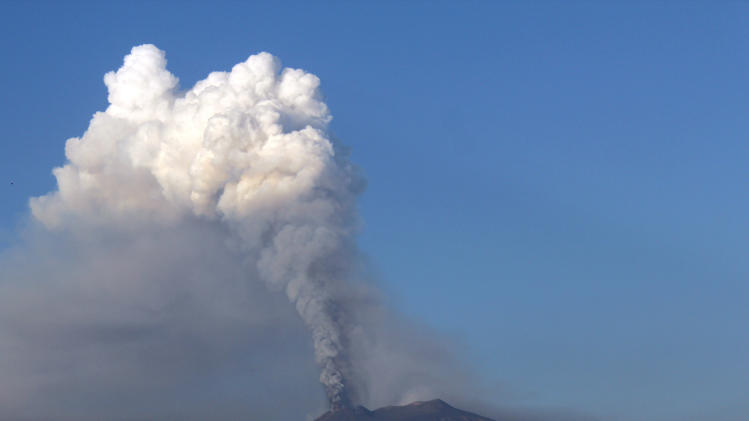 ROME (AP) — Mount Etna, Europe’s most active volcano, has erupted, sending up a towering plume of ash visible in much of eastern Sicily.Etna’s eruptions aren’t infrequent, although the last major one occurred in 1992.Catania airport said the eruption Saturday forced the closure of nearby airspace before dawn, but authorities lifted the order in early morning.Several inhabited villages dot the mountain’s slopes, but evacuations weren’t necessary despite the lava flow.

View Photo Cars pass under a tsunami advisory following an earthquake on Route 45 in Kamaishi …TOKYO – A magnitude 7.3 earthquake struck offshore of Japan’s crippled nuclear power plant early Saturday, triggering small tsunamis but causing no damage.An earthquake official with the Japan Meteorological Agency said the quake was an aftershock of the magnitude 9.0 earthquake and tsunami that struck the same area in 2011, killing about 19,000 people and devastating the Fukushima Dai-Ichi nuclear power plant.There was no damage and only one minor injury was reported, the national Fire and Disaster Management Agency said. Tsunamis of up to 40 centimetres (15 inches) hit four areas along the coast, but a tsunami advisory was lifted less than two hours after the quake.The epicenter of the 2:10 a.m. Tokyo time (1710 GMT) quake was about 290 kilometres (170 miles) off Fukushima, and it was felt in Tokyo, 300 miles (480 kilometres) away.”It was fairly big, and rattled quite a bit, but nothing fell to the floor or broke. We’ve had quakes of this magnitude before,” Satoshi Mizuno, an official with the Fukushima prefectural government’s disaster management department, told The Associated Press by phone. „Luckily, the quake’s centre was very far off the coast.”Mizuno said the operator of the troubled Fukushima plant, Tokyo Electric Power Co., said no damage or abnormalities had been found.Japan’s meteorological agency issued a 1-meter (3-foot) tsunami advisory for a long stretch of Japan’s northeastern coast. It put the quake’s magnitude at 7.1, while the U.S. Geological Survey recorded a magnitude of 7.3. The U.S. Pacific Tsunami Warning Center did not post warnings for the rest of the Pacific.The meteorological agency reported tsunamis of 40 centimetres in Kuji city in Iwate prefecture and Soma city in Fukushima, as well as a 20-centimetre tsunami at Ofunato city in Iwate and a 30-centimetre tsunami at Ishinomaki in Miyagi prefecture.All of Japan’s 50 nuclear reactors remain offline as the government decides whether they meet more stringent requirement enacted after the 2011 quake, which triggered multiple meltdowns and massive radiation leaks at the Fukushima plant about 250 kilometres (160 miles) northeast of Tokyo.A string of mishaps this year at the Fukushima plant has raised international concerns about the operator’s ability to tackle the continuing crisis.Nuclear Regulation Authority Chairman Shinichi Tanaka has scheduled a Monday meeting with Tokyo Electric’s president to seek solutions to what he says appear to be fundamental problems.

View PhotoIn this Wednesday, Oct. 16, 2013 photo, homeless Danny Hastie, 20, left, looks at …LONDON – London is famed for its historic sites, its double-decker buses and its West End shows, but the city now has a more dubious distinction: Britain’s public health agency says it has become the tuberculosis capital of Western Europe.In response, health officials are taking to the streets in an effort to stop the spread of the infectious lung disease. A high-tech white van equipped with an X-ray machine is driving around London offering free check-ups.Similar vans were once common in Europe and the U.S. in the 1950s but most disappeared about two decades later when TB rates dropped. But in recent years, the disease has surged in the U.K.Last year, London had about 3,500 TB cases — more than the Netherlands, Belgium, Greece and Norway combined. It also had more TB than some African countries, including Eritrea and Gambia.Britain as a whole however still pales against India, China and South Africa, which all have hundreds of thousands of TB cases.We kind of took our eye off the ball and now TB has become a big problem again,” said Dr. Alistair Story, who runs the mobile TB van for University College London Hospitals.He said the vast majority of TB in the U.K. is among the homeless, drug users and prisoners because they live in cramped conditions that make them susceptible to infections. Despite the belief that TB is being imported into the U.K. by recent immigrants, Story said their rates of infection are low.”It’s certainly not the case that we could have closed the borders and avoided the problem,” he said, pointing out that other European countries with high levels of immigration, including France and Germany, have not had similar spikes of TB.Tuberculosis is a highly infectious bacterial disease often spread by coughing or sneezing that kills more than 1 million people worldwide every year. It most often attacks the lungs and is highly treatable. More than 95 per cent of TB deaths occur in developing countries. Experts are increasingly concerned about the rise of drug-resistant strains of TB, which require more toxic drugs to treat.According to a global TB report issued Wednesday by the World Health Organization, 3 million people worldwide with TB are currently going undiagnosed. Another 16,000 people with drug-resistant strains are failing to get treatment.London’s 460,000-pound ($743,300) TB van has an X-ray machine whose scans can be instantly read by a radiographer. On average, the van picks up about one new TB case per week and screens about 10,000 people a year. If an X-ray looks worrying, staffers call a hospital to arrange confirmatory tests. The entire process of getting an X-ray and its results takes about 90 seconds.On a recent morning, a steady trickle of patients streamed into the van after getting a ticket for a free X-ray from a nearby homeless shelter. To convince homeless people to get tested, the van relies on former TB patients including Horace Reid, 58, who got tested in 2009 after running out of breath trying to catch a bus.”I didn’t know anything was wrong until I missed the bus and couldn’t breathe,” he said. „(The doctors) told me I had TB and that I could die.”Dr. Norman Edelman, senior medical adviser at the American Lung Foundation, said the van is a practical attempt to curb TB.”The people most likely to get TB are the hardest to find, so it’s good to go out looking for them,” he said.Danny Hastie, 20, got sick numerous times last year but didn’t bother seeing a doctor. Recently in prison, he has been living on the streets for more than a year.”I heard about this van and thought I would give it a go,” he said. „It’s (scary) at first because you’re thinking, ‘Oh, I might have a chest infection,’ but when they say that you’re clear, it puts your mind at rest.”British experts said the van was a good way of finding TB cases among the homeless but said wider screening tests were needed.Dr. Ajit Lalvani, chair of infectious diseases at Imperial College London, said 70 per cent of people with latent TB who arrive in Britain are missed. They aren’t currently infectious, but Lalvani said the TB bacteria could sicken them in the future and cause them to infect others. Catching these patients would require a more expensive blood or skin test that isn’t commonly used.”There is a vast reservoir of TB that comes into this country silently,” he said. „The mobile van is providing a great service, but until we test more widely, we will never get rid of TB in the U.K.”