By VLADIMIR ISACHENKOV 1 hour ago 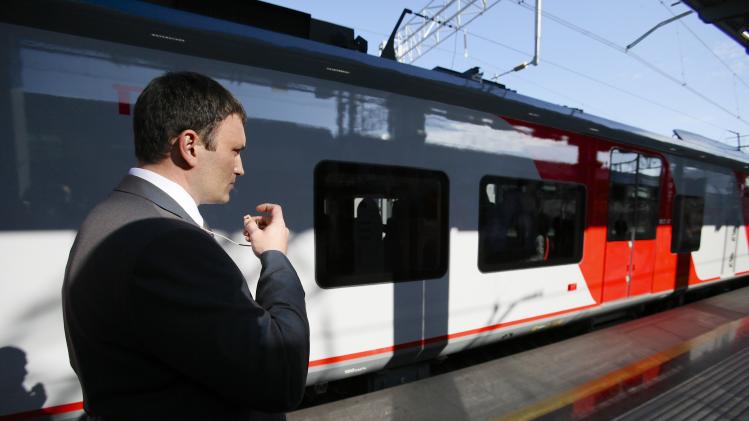 MOSCOW (AP) — The organizers of the 2014 Winter Games in Sochi have introduced some of the most extensive identity checks and sweeping security measures ever seen at an international sports event, raising concerns that they are stifling dissent and violating privacy under the pretext of fulfilling their pledge to make the games „the safest Olympics in history.”-Related Stories

With an Islamist insurgency raging across the North Caucasus Mountains east of the Black Sea resort, Russia’s security agencies have had carte blanche to ensure that nothing spoils President Vladimir Putin’s pet project. While the official line is that the stringent measures are meant to block the terror threat, critics say the Kremlin is equally concerned about preventing anti-Putin protesters from raising an embarrassing ruckus at the games.The filters are activated right at the ticket-buying stage.Anyone wanting to attend the games that open on Feb. 7 will have to buy a ticket online from the organizers and obtain a „spectator pass” for access. Doing so will require providing passport details and contacts that will allow the authorities to screen all visitors and check their identities upon arrival. Guests will be asked to wear their passes while attending Olympic events for quick and easy identification.Russian government officials and Sochi organizers say the security pass is necessary to keep the games safe. Some critics, however, says that it will do little to deflect a terror threat from people already in the Sochi area — as potential terrorists would have had years to settle within the security zone.”This kind of pass, this kind of measure might stop some people from going to the Olympics … but this kind of measure can’t deal with the people who actually live in the area,” said Andrei Soldatov, an independent Moscow-based security analyst.View gallery.” 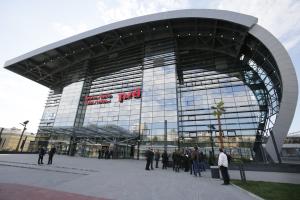 FILE – In this Monday, Oct. 28, 2013 file photo a general view of the newly built railway station „A …While China was criticized for undeclared visa bans on people from some countries in the Middle East and Africa during the 2008 Summer Games in Beijing, it introduced identity checks only for the opening and closing ceremonies.Organizers of the 2012 London Olympics put up some unprecedented security, including patrols by combat jets, surface-to-air missiles on rooftops and an aircraft carrier on the River Thames, but they didn’t reqire any passes in addition to tickets.The tens of thousands of police, security agents and army troops to be deployed in Sochi are twice as many as during the London Summer Games, said Matthew Clements, an analyst at Jane’s.”The Sochi security effort is much more far-reaching,” Clements said. „This also represents the fact that there is an active insurgency operating in the near vicinity.”Militants aspiring to create an Islamic state in the North Caucasus have spread across the region after two separatist wars in Chechnya. The epicenter of the rebellion is in the Caspian Sea province of Dagestan, about 500 kilometers (300 miles) east of Sochi, where rebels launch near daily attacks on police and officials. But other Caucasus provinces lying closer to Sochi also have been roiled by violence.View gallery.” 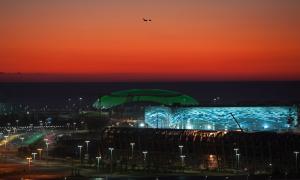 FILE – In this Thursday, Oct. 24, 2013 file photo the Olympic Bolshoy stadium, in the background, an …Clements said that the security zone created around Sochi stretches approximately 100 kilometers (60 miles) along the Black Sea coast and up to 40 kilometers inland. Russian forces include special troops equipped for patrolling the forested mountains towering over the resort, speed boats to patrol the coast and state-of-the art sonars to spot submarines.The security regime includes a ban on the entry of all cars from outside the zone starting one month before the games and ending only one month after they end. Vehicles involved in servicing the Olympics but registered elsewhere need special passes.Inside the Sochi security zone, the government has a list of more than 600 facilities to be put under special protection months before the games. Along with the Olympic facilities, bridges, railway tunnels and depots, the list includes Sochi schools, kindergartens, hospitals, hotels, restaurants and stores.Russian security agencies have developed a massive surveillance system that critics say will allow them to intercept any phone calls and Internet traffic, with a particular emphasis on Sochi.Russia’s communications surveillance system, SORM, the Russian acronym for the System of Operative Investigative Measures, has required all telecom providers to install equipment that feeds all traffic directly to security agencies. Their officers are required by law to have a court sanction for eavesdropping, but they don’t have to show it to anyone.View gallery.” 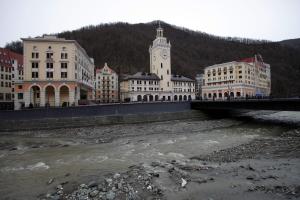 FILE – In this Friday, Feb. 22, 2013 file photo newly built hotels are situated along a river in Kra …”The system … is very intrusive,” Soldatov said, „much more intrusive than in the West.”Official papers have suggested that the SORM system in Sochi has been modernized to cope with the heavy flow of communications during the games, but officials have said little about the details.Earlier this year, the Communications Ministry issued a directive urging all communications companies to introduce new equipment capable of intercepting mail traffic on Gmail and Yahoo.Soldatov said that in addition to terrorists, authorities may be looking to filter out protesters.A controversial Russian law banning gay „propaganda” has drawn broad international criticism, and activists may be planning protests in Sochi despite an official ban on all rallies.View gallery.” 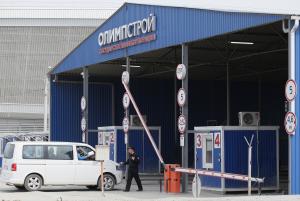 FILE In this Tuesday, April 16, 2013 file photo a security guard checks documents at the entrance to …The Russian government also has invested heavily into other means of surveillance, installing some 5,500 closed-circuit cameras throughout Sochi and buying a fleet of drones. The drones could be particularly handy for quickly spotting anyone attempting to break an official ban on protest in Sochi.Months before the games, security agencies have moved to expel some of those whom they consider unwelcome. In particular, police have conducted sweeping document checks among thousands of migrant workers who were recruited to build Olympic facilities and deported many, drawing criticism from rights groups.Critics compared the measures to the Soviet actions ahead of the 1980 Summer Games in Moscow, when the KGB simply sent all those deemed suspicious out of the capital.Police in Sochi have conducted methodical house-to-house checks to screen residents and advised those who lack permanent registration in the city to leave.Police and other security agencies have run dozens of drills to prepare for possible emergencies. The latest involved several dozen people posing as terrorists to check the readiness of security agencies and the vigilance of the population. The exercises also involved checking all cars at entry points to the area, exasperating motorists who spent hours in traffic jams.___Cassandra Vinograd in London and Christopher Bodeen in Beijing contributed to this report.

By The Associated Press | The Canadian Press – 7 hours agoRelated Content

More Business news »WASHINGTON – House Republicans will weigh in Friday on President Barack Obama’s signature health care program now that the president has had his say on reversing millions of insurance cancellations.Both the president and House Republicans have been responding to public anger resulting from cancellation notices sent out by insurers selling policies deemed substandard under „Obamacare.” At least 4.2 million having gone out, according to an Associated Press survey.The president said earlier this week he would change course and permit companies to continue to sell the plans — to existing customers only — for at least one more year.

Republicans are pushing ahead with their own plan to permit companies to continue to sell the plans to new customers as well as existing ones, and the House was expected to vote on the bill Friday.

The White House, however, said late Thursday the president would veto the legislation.

Democrats in Congress have been pressuring the president to be flexible on the cancellation issue, which is just one of the several problems hurting the health care rollout that promises to be at the centre of next year’s midterm elections for control of the House of Representatives and the Senate.

„What we want to do is to be able to say to these folks, you know what, the Affordable Care Act is not going to be the reason why insurers have to cancel your plan,” Obama said of the millions who have received cancellation notices. The president’s shift also was designed to redeem his long-ago pledge that people who liked their coverage could keep it.

The president’s change in course effectively shifts responsibility for cancellations from the administration to state insurance regulators and the industry itself.

Shortly after Obama spoke, the major industry trade group, America’s Health Insurance Plans, warned in a statement that prices might rise as a result of his new policy.

„Changing the rules after health plans have already met the requirements of the law could destabilize the market and result in higher premiums for consumers,” it said.

„In addition, it is unclear how, as a practical matter, the changes proposed today by the president can be put into effect. In many states, cancellation notices have already gone out to policyholders, and rates and plans have already been approved for 2014,” he added.

In California, where more than 900,000 cancellations have been sent out, Insurance Commissioner Dave Jones called on insurers to extend the policies being scrapped.

Until the president made his announcement, the administration had been assuming that individuals currently covered by plans marked for cancellation would switch to alternatives offered in government-established exchanges. If so, they would be joining millions of others who have lacked insurance in the past.