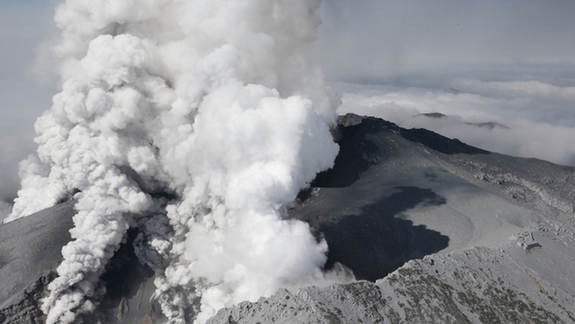 The eruption caught the hikers by surprise this weekend. More than 250 people were exploring shrines and resorts at the 10,062-foot-high (3,067 meters) peak, the country’s second-tallest volcano.But just a month ago, in Iceland, anyone with an Internet connection knew exactly where new magma was tunneling underground before the Bardarbunga eruption began. Earthquakes, GPS and volcanic gas „sniffers” plotted out each new advance. (Magma is molten rock underground, whereas lava is molten rock flowing on the surface.) [Stunning Pictures: Japan’s New Volcanic Island]Japan has a similar high-tech network for watching its volcanoes. But Saturday’s killer outburst was likely a phreatic eruption, a shallow steam explosion that is nearly impossible to predict, experts told Live Science.”If you have a monitoring system in place, it’s very unlikely that deeper activity will go unnoticed,” said Philipp Ruprecht, a volcanologist at Lamont-Doherty Earth Observatory in Palisades, New York. „We have very little information or science to help the monitoring people with phreatic eruptions.”Sudden surprise A phreatic eruption is just water and heat. Think of the inside of a volcano as a solid rock „oven” heated by magma. Earthquakes and shifting magma often jiggle and crack the rock. When a new crack opens in the oven, a blast of heat escapes, similar to opening a kitchen oven’s door. If groundwater leaks into the crack, the water immediately flashes into steam from the intense heat. This violent transformation pulverizes the surrounding volcanic rock. Steam occupies much more space (or volume) than water, so it expands outward in all directions, punching a hole in the side or top of the peak.”No magma actually erupts, it’s just broken-up old rock that’s been obliterated,” said Margaret Mangan, scientist in charge at the U.S. Geological Survey’s California Volcano Observatory in Menlo Park, California.View gallery 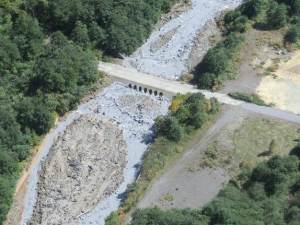 Ash chokes a river at Japan’s Ontake volcano on Sept. 29.Cracks can open without warning, Mangan said. On the other hand, frequent or more severe earthquakes at a volcano with a history of phreatic eruptions could mean it’s time for more vigilant monitoring, she added.Earlier this month, the Japan Meteorological Agency (JMA) had warned of waxing and waning volcanic tremors at Mount Ontake. Tremors are small, nearly imperceptible earthquakes. Officials did not raise the volcano’s alert level from normal, or Level 1. There were no signs of rising magma, such as changes in the ground surface or gases steaming from the peak, JMA said in a Sept. 28 statement. Phreatic eruptions sometimes come before lava erupts, like a volcano clearing its throat. The incredible bang from the 1883 Krakatau eruption in Indonesia, heard „around the world” was from a phreatic eruption. Huge lava blasts followed. And similar explosions can occur when magma meets water, which volcanologists call phreatomagmatic eruptions. Some of these magma-water blasts leave behind giant, bomb-like craters called maars.However, no one has seen fresh lava at Mount Ontake since Saturday’s eruption.The Japan Meteorological Agency currently has alerts and warnings for 11 volcanoes, including Ontakesan, as it is called in Japan. The last phreatic eruption at Mount Ontake was in 2007. Its last volcanic blast was in 1979.Deadly ash flow Saturday’s explosion triggered a pyroclastic flow, a mix of ash and volcanic gas that billows outward at hurricane speeds and crucible-like heat. It’s likely that many of the hikers trapped in the pyroclastic flow survived either because they were on the edge of the ash cloud or because it was relatively cool, though no one knows at this time. Scientists will determine the conditions once the volcano is safer to approach.A pyroclastic flow triggered by jetting lava can reach nearly 1,300 degrees Fahrenheit (700 degrees Celsius) and speeds exceeding 100 mph (161 km/h).”It’s a hazard that you don’t run away from, because they’re just moving too fast,” Mangan said. [Video – Crews Recover Bodies from Japan Volcanic Eruption]About 200 people are thought to have survived Saturday’s deadly blast by scrambling down the mountain through the choking ash clouds or sheltering in huts and lodges. Their harrowing tales include eerie darkness, rocks raining from the sky and struggling to breath in the thick ash. A phreatic explosion tends to produce very fine ash particles, Ruprecht said. The ash covered 2 miles (3 km) of the mountain’s south slope. „It’s like being in a sauna while you’re being blasted by a dust storm. It’s hard to imagine how they were able to breathe,” Ruprecht said.Volcanic gases such as sulfur dioxide can also suffocate those trapped on the mountain, and rocks flung at high-speed can crush people and cause fatal head wounds. A phreatic explosion killed five people at Mayon volcano in the Philippines last year.Email Becky Oskin or follow her @beckyoskin. Follow us @livescience, Facebook & Google+. Original article on Live Science.

By KEN MORITSUGU and MARI YAMAGUCHI15 hours ago 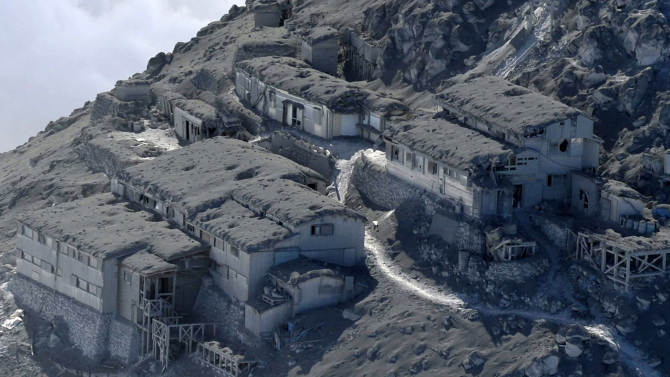 Toxic gases and ash were still coming from the Mount Ontake volcano Monday, halting the search for more victims and the recovery of the bodies. Here’s a summary of events and a guide to understanding them:

_SEARCH AND RECOVERY So far, 12 bodies of victims killed in Saturday’s eruption have been recovered, and 24 are still on the mountain. Several hundred emergency workers and soldiers are involved in the effort to remove the bodies and search for any others._A MOUNTAINTOP SHRINE View gallery 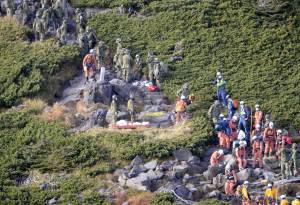 CORRECTS DATE – Firefighters and members of the Japan Self-Defense Forces descend Mount Ontake after …Ontake Shrine at the summit sits atop a stone platform overlooking verdant hills. The shrine, a lodge below it and nearby rocks are covered in ash up to 50 centimeters (20 inches) deep. The victims were found in or near the shrine and the lodge._HOW THE VICTIMS DIED Authorities are focusing on three possible causes: injuries from rocks ejected from the volcano, toxic gases, suffocation from lung-choking ash — or some combination of them. At least some of the bodies had severe bruises, a Nagano prefecture police official said, speaking on condition of anonymity because he was not authorized to speak to the media.Two experts said rocks flying out of the craters could be the main cause, because of the way the deaths are concentrated in one area near the summit. One survivor who protected her head with a knapsack told a Japanese broadcaster that she found a thermos inside flattened afterward.Hikers might also have been incapacitated, either by flying rocks or toxic gases, and suffocated under a reported ashfall of up to 50 centimeters (20 inches). Hydrogen sulfide and sulfur dioxide can cause serious damage to the respiratory system, said Koji Ono, an official in the Japan Meteorological Agency’s volcanic section._VOLCANO’S STATUS The current alert status is Level 3, meaning people should pay attention to volcanic activity and should not approach the volcano. The scale ranges from Level 1, meaning emissions generally are contained within the crater, to Level 5, which is a warning to evacuate._Online: Japan Meteorological Agency (in English): http://www.jma.go.jp/en/volcano/

By BRADY McCOMBS8 hours ago 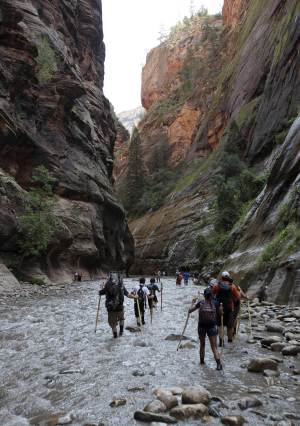 View gallery FILE – In this Sept., 5, 2009, file photo, hikers wade through the cold Virgin River along the „Narrows,” …SALT LAKE CITY (AP) — A 34-year-old Southern California man was found dead over the weekend in Zion National Park after rising floodwaters trapped him in a narrow canyon that is home to one of the park’s best-known hiking trails.Douglas Yoshi Vo’s body was found Sunday afternoon in the „Narrows,” a popular hike that entails walking in shallow water through a winding canyon with steep walls, National Park Service spokesman David Eaker said.Vo, of Westminster, California, and his friend began hiking early Saturday when rains came and the river began rising rapidly, forcing them to take refuge on high ground. They ended up on opposite sides of the raging river and could not talk to one another because of the noise of the water, Eaker said.The two waited until the afternoon, hoping the water level would lower and allow them to hike out.Vo’s friend swam the flooding river to safety, while Vo remained where he was, Eaker said. The friend’s name wasn’t made public.He alerted park rangers Saturday evening about Vo, but rescuers determined the river was running too high to safely enter at night. Officials also thought Vo was in a safe place.View gallery 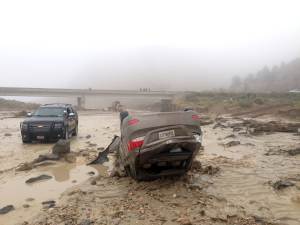 This Sunday, Sept. 28, 2014 photo provided by Garfield County Sheriff’s Office, shows a car in G …When rangers hiked into the canyon Sunday morning, Vo wasn’t where he was the day before. His body was found about a quarter-mile downriver on a bank around 2 p.m. Sunday.Authorities have not yet determined a cause of death.”We don’t know if decided to swim as well or if he fell in,” Eaker said.Several people have died in the Narrows over the years, Eaker said, with the latest coming in 2010 when two people tried to build a makeshift raft and float down the river.On Saturday, when Vo and his friend began their hike, there were flash flood warnings for the area surrounding the canyon. But, it’s believed that rangers didn’t put up warning signs at the trailhead until after the men started the hike.View gallery 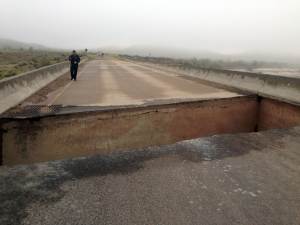 This Sunday, Sept. 28, 2014 photo provided by Garfield County Sheriff’s Office, shows a road in  …It doesn’t appear anybody else was in the canyon when the flooding started, Eaker said. It is unknown if the men were aware of the weather forecast, he said.The water was flowing at about 46 cubic feet per second when the men started the hike. At the peak of the flooding, it was roaring at 4,000 cubic feet per second, Eaker said. The death highlights the dangers of hiking in canyons when storms are forecast, he said.Zion National Park, in the southwest corner of Utah, is the state’s most popular national park. Earlier this month, it was closed for several hours when heavy rain and a surging river made park routes impassable.Heavy rain swamped much of Utah over the weekend, shutting down a sewage treatment plant, damaging homes and causing a moving car to plunge into a river.In southern Utah, a man and woman from Italy were returning to their campsite at when the ground under the pavement gave way due to heavy flooding and sent their car into a river in Garfield County. They suffered extreme hypothermia and were taken to the hospital, where they are expected to make a full recovery, said sheriff’s spokeswoman Cheryl Church said.

2 hours ago We’re only hours from the official unveiling of the Kawasaki Ninja H2 and H2-R, but some sneaky person has found the Kawasaki Ninja H2 photos. Either by hacking a media site or breaking a European embargo (No US journalists have access to info or images until tomorrow).Kawasaki Ninja H2 Photos Still no official info, only photos at this moment, but that doesn’t stop wild speculation that claims to be fact. According to Ninjah2.net, the Ninja H2 is supposed to make 300hp out of the supercharged 4-cylinder–we believe that’s a complete joke and not anywhere close to reality. There’s no way a production bike could make that kind of power, but we could be proved wrong as Kawasaki will unveil the bike tomorrow morning, September 30th, 2014 at 1:30am. Another estimate says around 225hp, which is still absurd.The frame resembles that of a Ducati Monster, with exposed frame tubes that use the engine as a structural part of the bike. It looks to be very light weight for its size as one speculation says it’ll measure 998cc. The carbon-fiber body work will probably be exclusive to the H2-R model, which is what you’re looking at here. Wild carbon-fiber intake ducting and a single-sided swing arm, we can’t wait to get our legs over this thing… which might be sooner than you think. Pssh, check back in a couple weeks.Either way, enjoy the photos and stay posted as we’ll be unveiling the Kawasaki H2 Ninja tonight as soon as in the info comes in. 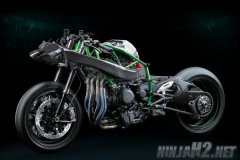 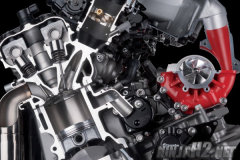