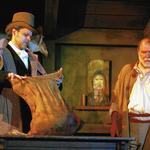 HOME
Doug MacKechnie is the Creator and Craig Spidle the Gravedigger at First Folio.

In „The Gravedigger,” now in a world premiere at First Folio Theatre, the title character, Kurt (Craig Spidle), is a drunkard with a bad leg who has made some money on the side selling body parts to Victor (Doug MacKechnie). A year later, Kurt finds an oversized fellow with a bandaged face hiding in an open grave. He takes pity on the „lummox,” who in turn takes the name „Anton” in honor of St. Anthony, the patron saint of gravediggers (and butchers, for extra irony) whose image hangs in Kurt’s rudely constructed hut. Soon, Kurt and Anton (Josh Carroll) form an ad hoc father-child relationship.Got something to say? Start the conversation and be the first to comment.

Kurt is himself an outcast for reasons revealed later in the play. A Romani or „gypsy” woman, Nadya (Simina Contras), who uses the bones and dirt from the cemetery to ply her fortune-telling trade, completes the triumvirate of the dispossessed. Between Kurt’s friendship and Nadya’s insights into his tormented psyche, Anton begins to literally expose the scars of his past. When that past finally catches up with him in the form of Victor, demanding retribution for Anton’s crimes, it creates a set of moral conundrums for all the characters.At its heart, Zettelmaier’s play is concerned with the deepest questions of how a human soul is formed. Are we marked from birth for our destiny, or can we overcome our human (or humanlike, in Anton’s case) transgressions to touch upon something greater than our own dark impulses? And if our ability to love carries within it the certainty that we shall suffer, how do we carry on after great loss?If this sounds overly solemn, rest assured that both Zettelmaier’s play and director Alison C. Vesely’s staging contain plenty of wit and charm without indulging in obvious wink-and-nod references to the familiar original (or its many subsequent versions). This isn’t a ponderous gothic affair, though Angela Weber Miller’s crepuscular set, Michael McNamara’s vibrant-yet-shadowy lighting and Christopher Kriz’s wind-swept soundscape turn the Mayslake chapel venue into a gloomy delight.Spidle nails Kurt’s blend of half-buried anguish and choleric wit. „I wish for a buxom woman with a stein between her breasts. Mine is a life of disappointment,” he tells Anton when the latter bemoans his friendless lot. Anton’s increasing ability to recognize and even tell jokes becomes a marker of his innate humanity and humaneness — the very tall Carroll soon responds to Kurt’s „lummox” epithet by calling his benefactor „runt.” And though I think Nadya’s character could be fleshed out even more — she feels a bit like a plot catalyst at this point — the graceful Contras delivers a sinuous performance with just the right touch of elbows-out spikiness. MacKechnie’s Victor, despite having the thankless villain’s role (and also the one that adheres most closely to Shelley’s original), finds the appropriate somber notes of guilt and despair driving the doctor’s quest.This past spring, First Folio produced Zettelmaier’s „Salvage,” a contemporary romance with a twist that also raised questions of how one overcomes a troubled past. Though „The Gravedigger” couldn’t be more different in tone, it also shows off the writer’s gift for creating easily digested but emotionally resonant portraits of one essential truth, as expressed by Anton. „All that live wish to be understood.” This is a monster show with heart and soul to spare.ctc-arts@tribune.com