CHARLESTON, S.C. (Reuters) – Hurricane Fred strengthened on Monday in the eastern Atlantic as it approached the Cape Verde islands but was forecast to weaken in the coming days, while the remnants of Tropical Storm Erika brought flooding to parts of South Carolina, according to U.S. forecasters.The center of Fred is expected to pass near or over the northwestern Cape Verde islands, an archipelago off the west coast of Africa with a population of 525,000.Fred had maximum sustained winds of 80 miles per hour (130 km per hour), but was expected to gradually dissipate after passing the Cape Verde islands late on Monday, then move away on Tuesday, the National Hurricane Center (NHC) said.Fred was not expected to threaten the Caribbean or the United States.”Weakening is forecast during the next couple of days,” government forecasters said. 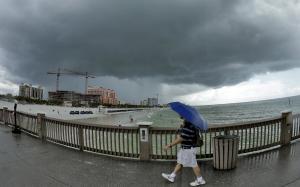 A beach goer leaves the pier on Clearwater beach as a squall from the remains of tropical storm Erik …The NHC said it was rare for a storm to form so close to the coast of Africa. Fred was the first hurricane to go through the Cape Verde islands since 1892, according to the official Atlantic tropical cyclone record which begins in 1851.Tropical Storm Erika dissipated over Cuba on Saturday after killing at least 20 people in the small eastern Caribbean island of Dominica, and one person in Haiti.Its remnants brought thunderstorms to Florida over the weekend before moving into South Carolina on Monday.By 9:30 a.m. EDT, almost 6.5 inches (16.5 cm) of rain had fallen at South Carolina’s Charleston International Airport, according to the National Weather Service.In Charleston’s outlying suburbs, some residents reported on social media that they could not get out of their driveways, and local TV stations showed pictures of cars submerged above their windows and over the hoods.Charleston police closed streets in peninsular Charleston, which is at or slightly above sea level.The torrential rain coincided with „king tides,” especially high tides caused by a full moon and expected to last until Wednesday, city officials said.(Additional reporting by David Adams in Miami; Letitia Stein in Tampa, Florida; and Kevin Jose in Bengaluru; Editing by Jeffrey Benkoe and Lisa Shumaker)

Amazing Hurricane Hunter Photos Show Insides of Hurricane Ignacio’s Eye By Chris Dolce Published Aug 31 2015 02:40 PM EDT weather.com Hurricane Hunters Release Video from Inside Ignacio’s Eyewall Meteorologist Ari Sarsalari talks about incredible video taken by hurricane hunters, that shows the inside of Ignacio’s eyewallHurricane Hunters investigating powerful Hurricane Ignacio east of Hawaii this weekend shared stunning photos and video from inside the storm’s eye.Ignacio reached its peak intensity as a Category 4 hurricane with 145 mph winds Saturday, making it one of three Category 4 hurricanes in the Pacific at that time.(MORE: Three Category 4 Hurricanes Simultaneously)The images show the stadium effect, which refers to how the inside of a well-defined eye can look like a bowl-shaped stadium. The towering clouds that make up the surrounding eyewall take on the role of stadium seating. The lower, clearer portion near the center of the eye is the playing field. While these features can be seen from space, it’s a particularly impressive sight from Hurricane Hunter aircraft flying inside the eye and collecting data. 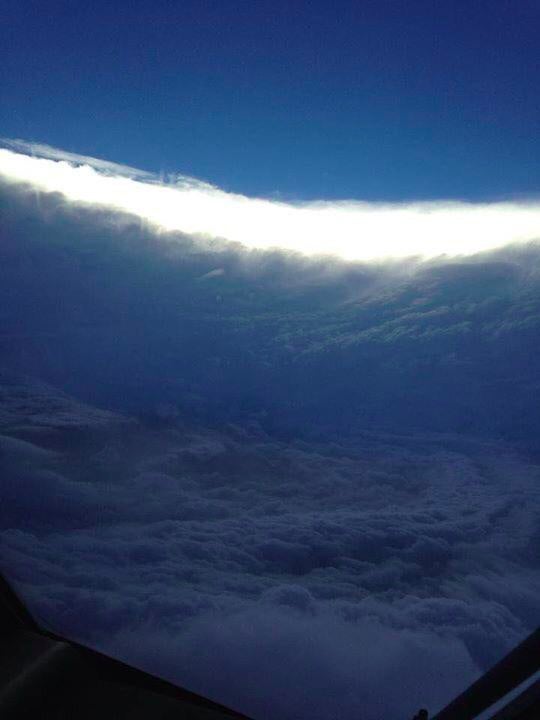 Inside the eye of Hurricane Ignacio. (Air Force Reserve 403rd Wing Hurricane Hunters) Some of the most dramatic weather changes on Earth can occur a short distance near the eye of an intense hurricane.Inside the eye, winds are mostly light. But lurking a short distance away lies the surrounding eyewall, where the most intense and destructive winds of a hurricane are found.Hurricane eyes appear in various sizes and shapes. They can also vary in how they appear during the life of a hurricane. A great example is Hurricane Wilma in 2005, which had a tiny eye that was just two nautical miles wide when it was a Category 5 hurricane in the northwest Caribbean.According to the National Hurricane Center, that tiny eye was replaced by another eye around a day later that was 40 nautical miles wide. The eye remained 40 to 60 nautical miles wide for the rest of Wilma’s existence.

Inside the eye of Hurricane Ignacio. (Air Force Reserve 403rd Wing Hurricane Hunters) Some hurricane eyes are clear enough that portions of the ocean surface may be visible from satellite images, while others are filled with clouds. A person on the ground in the middle of an eye could see blue skies during the day or stars at night if the eye is free of widespread clouds.Dr. Matt Sitkowski of The Weather Channel explains why the eye of a hurricane can appear so clear at times: „In the eye, air sinks and warms. This warming helps to lower the storm’s pressure and will also make the atmosphere more dry. This drying causes the clouds to evaporate, making the eye visible from space.”Sitkowski adds, „Hurricane Rita’s eye was amazing. At around 10,000 feet, air that had descended from higher in the atmosphere warmed to 88 degrees and the dew point was only 27 degrees, making for an extremely dry eye. There were very few clouds in the center of the eye, so it remains one of the best examples of the stadium effect.” 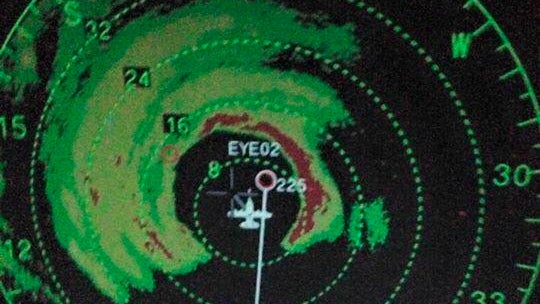 Randy Straker displays rare neon-green pike. Photo: Craig Thomas/Mercury Press/Caters News Somewhere in northern Canada’s Great Slave Lake is a fluorescent-green pike that looks as though it’s wearing neon-green lipstick.The bizarre-looking fish was released after being caught by Yellowknife angler Randy Straker, during a recent outing with Craig Thomas.Northern pike, also referred to as jackfish, are typically much darker, with a brownish or olive-green complexion, and with yellowish-white bellies.The 12- to 14-pound pike reeled in by Straker, an avid Great Slave Lake angler, “was totally, head to tail, like nothing we’d ever seen before.”image: http://cdn.grindtv.com/wp-content/uploads/2015/08/pike.jpg

Photos show normal-colored pike (top) and the light green pike caught by Randy Straker. Photos: Craig Thomas, via CBCHe explained to CBC: “The whole top of the fish had a different green. If you look at the mouth, it looked like green lipstick, it was so bright.”The anglers set the pike free after taking a few quick photographs, realizing afterward that they should have taken more photos as a means of documenting their odd catch.“When you put it up against another pike, it’s way lighter,” Straker said. “The fins were kind of a translucent green as opposed to the darker colors of a regular pike.”On social media, many offered theories, ranging from the fish’s diet, to pollution, and even radiation from the Fukushima nuclear disaster.However, Jeff Goudreau, a Fish and Wildlife technician and Great Slave Lake guide, appears to have solved the mystery.image: http://cdn.grindtv.com/wp-content/uploads/2015/08/fish-mouth.jpg

Randy Straker said the fish looked to be sporting neon-green lipstick. Photo: Craig Thomas, via CBCGoudreau, who claims to have caught a few pike with similar coloration, said it has to do with cells called chromatophores, which enable fish to change colors when they’re frightened, or become excited while hunting, or to blend in with specific habitats.The unique coloration of this particular pike, Goudreau told CBC, probably stemmed from its habitat in shallower, algae-rich water of the narrow arm in which Straker and Thomas were fishing.“They try to blend themselves into that environment to be better hunters,” Goudreau said. “So you’ll see those aquamarine colors, where the throats are very blue and dark green and stuff. That’s pretty much what happened with this one.”This explanation was echoed by Neville Fickling, a pike expert from England, who said the predatory fish are “always going to be able to determine exactly what their environment is, and adapt chromatophores accordingly.”Straker and Thomas were exploring a new area in the vast Northern Territories lake, perhaps explaining why they had never seen a pike so uniquely green.“I was wearing polarized lenses, and I thought maybe that was causing some different coloration in the fish,” Straker said. “I was just about to pull my glasses off to take another look… and then my buddy made a comment about how strange the fish looked.”The two planned to fish the same area again, to see if they could land another just like it.More from GrindTV Ending an endless layer of plastics in the Pacific 5 gear companies that are doing great things for the planet How to book a last-minute Labor Day tripRead more at http://www.grindtv.com/fishing/mystery-surrounding-neon-green-pike-appears-to-have-been-solved/#vbv0bLq4ipqP2FoO.99