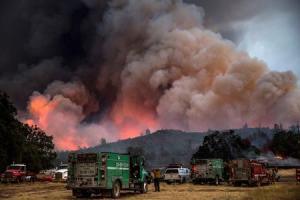 WASHINGTON (Reuters) – U.S. President Barack Obama on Tuesday signed a disaster declaration to make federal aid available to Northern California residents impacted by a major wildfire, the White House said.The assistance to people in Lake County affected by the so-called Valley Fire can include grants for temporary housing and home repairs, and low-cost loans to cover uninsured property losses, the White House said in a statement.Firefighters have largely contained the Valley Fire, which ignited on Sept. 12 in the hills north of Napa County’s wine-producing region and has blackened nearly 76,000 acres (31,000 hectares) and destroyed more than 800 homes.(Reporting by Eric Beech; Editing by Sandra Maler)

By Keith Coffman5 hours ago 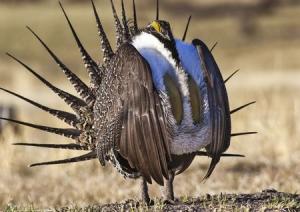 An undated handout provided by the U.S. Bureau of Land Management shows the file photo of a sage grouse. …By Keith Coffman Related Stories

COMMERCE CITY, Colo. (Reuters) – A long-simmering debate in the American West over the fate of a ground-dwelling bird reached a climax on Tuesday as the Obama administration denied Endangered Species Act protections to the greater sage grouse in favor of less rigid habitat conservation measures.Interior Secretary Sally Jewell said the need to list the charismatic bird as threatened or endangered was averted by the success of „unprecedented” collaboration among state and local governments, scientists, ranchers and other private interests over the last five years.She credited those efforts with significantly reducing threats to the sage grouse across 90 percent of its breeding habitat, staving off any immediate risk of extinction.”This is the largest, most complex land conservation effort in the history of the United States,” Jewell told a news conference, joined by four Western governors and a host of top federal land managers, at a wildlife refuge in Colorado.The plight of the grouse, a key indicator species for the vanishing sagebrush ecosystem of the American prairie, has pitted conservation groups against oil and gas drilling, wind farms and cattle grazing in one of the biggest industry-versus-nature controversies in decades.Tuesday’s announcement marked a turnabout from a 2010 finding by the U.S. Fish and Wildlife Service, an Interior Department agency, that endangered species protection for the grouse was warranted but that other species were a higher priority.The conservation strategy implemented since then offers an alternative for saving the grouse while allowing activities such as energy development, mining and ranching to co-exist with the chicken-sized prairie fowl, Jewell said.The greater sage grouse, known for its elaborate mating rituals, once ranged by the millions across a broad expanse of the western United States and Canada.They are now believed to number between 200,000 and 500,000 birds in 11 Western states and southern Alberta.Despite long-term declines, sage grouse populations „remain relatively abundant and well-distributed” across the bird’s 173-million-acre (70-million-hectare) range, Fish and Wildlife officials said.Fish and Wildlife Service chief Dan Ashe said losses were expected to continue, „but we believe at declining rates.”In addition to conservation programs for state and private lands representing 45 percent of sage grouse habitat, a patchwork of 98 U.S. land use plans also were revised to protect the bird on federal property that accounts for most of the rest.The federal plans impose a new set of tiered limits on development inside 67 million acres (27 million hectares) of designated habitat, with tougher restrictions on about half the total. Even more stringent protections will apply to a subset of those „priority” zones comprising 12 million acres (4.8 million hectares).Officials also pointed to newly adopted plans for curtailing two key environmental threats – rangeland wildfires and the spread of an invasive weed known as cheatgrass.The announcement was immediately welcomed by the Denver-based industry group Western Energy Alliance and the Colorado Cattlemen’s Association while receiving mixed reviews from environmental groups.National Audubon Society President David Yarnold endorsed the decision, calling it „a new lease on life for the greater sage grouse and the entire sagebrush ecosystem.”But Erik Molvar, a wildlife biologist for WildEarth Guardians, said the plans offered too little protection with too many loopholes, though he said his group would review the details before deciding whether to bring a court challenge.Protections from oil and gas drilling, for example, are much weaker in Wyoming, which accounts for 40 percent of all sage grouse habitat, than in other states, Molvar said.Unlike many such battles of the past, commercial interests this time have embraced conservation efforts aimed at avoiding potentially tougher restrictions under the Endangered Species Act.Many ranchers, in particular, found common cause with efforts to protect Western rangelands on which their livestock depend, often citing the rallying phrase, „What’s good for the bird is good for the herd.”The U.S. Department of Agriculture has worked with 1,100 ranchers to restore or conserve 4.4 million acres (1.78 million hectares) of key habitat, and the USDA said it expects voluntary, private land conservation efforts to reach 8 million acres (3.2 million hectares) by 2018.(Additional reporting by Laura Zuckerman in Salmon, Idaho; Writing and additional reporting by Steve Gorman in Los Angeles; Editing by Bill Trott and Sandra Maler) 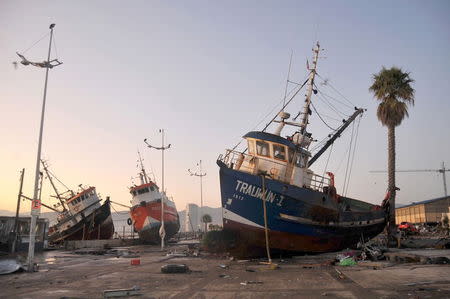 An aerial view of the coastline of Coquimbo city in the north of Santiago is seen …SANTIAGO (Reuters) – Chilean President Michelle Bachelet promised financial help on Monday to victims of last week’s 8.3 magnitude earthquake and the tsunami that followed, which battered the country’s coastline near the port of Coquimbo and destroyed hundreds of homes.The government would give one-time payments to affected families of $1,500 to rebuild homes and another $700 to replace lost goods, said Bachelet. The government would also use emergency funds to help the worst-hit fishing and port industries, she added.The quake on Wednesday night was the strongest recorded in the world this year.The latest toll was 13 people reported as killed and 14 injured, the emergency service Onemi said Sunday night. Nearly 2,000 homes had been destroyed or badly damaged, it said.”We know that any measure does not compensate for losses suffered during this new natural catastrophe, but we want people to know that the government is not going to abandon them,” said Bachelet.The earthquake, the latest in a string of natural disasters to hit Chile this year, comes at a difficult time for Bachelet, who is trying to turn around record lows in her popularity at a time when the economy is weak and an ambitious reform program is struggling.But the government learnt lessons from its perceived slow reaction to a massive 2010 quake, and the swift evacuation of coastal zones and prior enforcement of strict building regulations helped keep the death toll relatively low.The port of Coquimbo remains inoperational and a copper warehouse owned by JX Nippon Mining & Metals sustained minor damage, but mines in the world’s top copper exporter otherwise escaped largely unscathed.Aftershocks from Wednesday’s quake are still continuing, with many residents in central Chile woken in the early hours of Monday by a 6.3 magnitude tremor.(Reporting by Antonio de la Jara and Rosalba O’Brien Editing by W Simon)

Smoke rises from chimneys of a thermal power plant near Shanghai March 26, 2014. …

More Science news »OSLO (Reuters) – The number of carbon pricing schemes worldwide has almost doubled since 2012 but most taxes or markets have prices too low to prevent damaging global warming, the World Bank said on Sunday.Carbon pricing, including emissions trading schemes from California to China, now covers about 12 percent of all greenhouse gas emissions in a sign of momentum before a U.N. summit on climate change in Paris in December, it said.The number of carbon pricing instruments, both implemented or planned, has risen to 38 from 20 since 2012, it said. South Korea began carbon trading this year, for instance, and both Chile and South Africa plan taxes on carbon emissions.”There is a growing sense of inevitability … that there will be a price on carbon” for governments and businesses, Rachel Kyte, a vice president and special envoy for climate change at the World Bank, told a telephone new conference.The study showed that prices, meant to shift investments from fossil fuels toward cleaner energies such as wind or solar power, ranged from less than a dollar a tonne of carbon dioxide in Mexico to $130 a tonne in Sweden.In more than 85 percent of cases the price was less than $10, „considerably lower”, the report said, than levels needed to help limit temperature rises to a U.N. goal of 2 degrees Celsius (3.6 Fahrenheit) above pre-industrial times.The World Bank did not suggest a target price.The combined value of the carbon pricing instruments was estimated at $50 billion a year worldwide, with $34 billion from markets and the other $16 billion in taxes.A year ago, 73 countries and more than 1,000 companies and investors called for a price on carbon. Kyte said the group was becoming a „powerful coalition” that would make announcements before Paris. She gave no details.A parallel report by the World Bank and the Organization for Economic Cooperation and Development (OECD), with input from the International Monetary Fund, also laid out new principles for carbon pricing that it called FASTER.”Carbon pricing is central to the quest for a cost-effective transition toward zero net emissions in the second half of the century,” said Angel Gurría, Secretary-General of the OECD.FASTER stands for Fairness, Alignment of policies and objectives, Stability and predictability, Transparency, Efficiency and cost effectiveness and Reliability and environmental integrity.(Reporting by Alister Doyle; Editing by Ruth Pitchford)