View photosA firefighter works to put out a forest fire next to the village of Macao, near Castelo Branco, Portugal, August 17, 2017. REUTERS/Rafael MarchanteLISBON (Reuters) – Parts of Portugal, beset by its deadliest summer of wildfires in living memory, were declared in a state of public calamity on Thursday as the government put emergency services on alert for further outbreaks.It has borne the brunt of a heatwave that has settled over much of southern Europe, and more than three times as much forest has burned down in the country this summer as in an average year.Since a single blaze killed 64 people in June, the government has been under pressure to come up with a strategic plan to limit the damage.It said on Thursday the state of calamity would trigger „preventative effects” in the central and northern interior and parts of the southern Algarve region, while the meteorological office forecast temperatures would top 40 degrees centigrade in some places by Sunday.Prime Minister Antonio Costa would also meet with military, police and rescue service commanders „for the maximum mobilization and pre-positioning of personnel in the areas of greatest risk”, the government said in a statement.Since June’s tragedy, emergency services have made far greater efforts to evacuate villages and shut roads early in affected areas.Still, nearly 80 people have been hurt in wildfires in the past week alone, according to the civil protection service.Last Saturday, when a record 268 fires blazed countrywide, the government requested water planes and firemen from other European countries.On Thursday, over 130 people were evacuated from villages in the Santarem district around 170 km (110 miles) northeast of Lisbon, where over 1,000 firefighters were battling flames.With just over 2 percent of the EU landmass, Portugal accounts for almost a third of burnt areas in the union this year.More than 163,000 hectares of forest have been lost there, more than three times higher than the average of the last 10 years, according to EU data.(http://effis.jrc.ec.europa.eu/static/effis_current_situation/public/index.html#)(Reporting By Andrei Khalip, editing by Axel Bugge and John Stonestreet)

This Is Where You Should Go to See the Solar Eclipse, According to a Meteorologist

Photo credit: Getty ImagesFrom Country Living On August 21, people across the U.S. will flock to certain parts of the country for the chance to see a total solar eclipse. And before they arrive, they have to make sure they booked the right hotel, bought the proper eyeglasses, and picked the perfect camping spot. But even so, it could all be ruined with a little bit of bad weather.Unfortunately, Portland State University physics professor Jack Straton knows this all too well. In 1979, Straton’s brother, who worked at an observatory, told him a solar eclipse would be taking place near his hometown of Portland, Oregon. The astronomy enthusiast immediately got in his car and drove to the Columbia River because, as he describes it, a total solar eclipse is „one of the magnificent things the human eye can see.”But the cold temperatures near the water created a mist that blocked Straton from seeing the solar eclipse during its period of totality. „I felt really profound disappointment at that moment, but there’s nothing you can do,” he said. Almost 40 years later, Straton is giving it a try a second time. He’s been scouting camping sites in Oregon’s national parks for weeks, and finally found an area where he could settle in, six full days prior to the actual event, at a local campsite in Portland. He hopes once Monday rolls around, he will finally see a total solar eclipse in person.But how can you make sure you’re not missing out thanks to bad weather? Weather Underground meteorologist Bob Henson tells CountryLiving.com there are a few key places that are best for eclipse-hunters, according to his predictions. „It currently looks like the best chance of mostly cloud-free skies for the total solar eclipse will be in central and eastern Oregon and western Idaho,” he said. (Though most of the United States will be able to see a partial eclipse, there’s only a small segment of the country that will get to see a total solar eclipse.)The National Weather Service reports that Nashville, Tennessee, Columbia and Greenville, South Carolina, Hopkinsville, Kentucky, St. Joseph, Missouri, and Lincoln, Nebraska, currently have thunderstorm and shower predictions.View image on Twitter 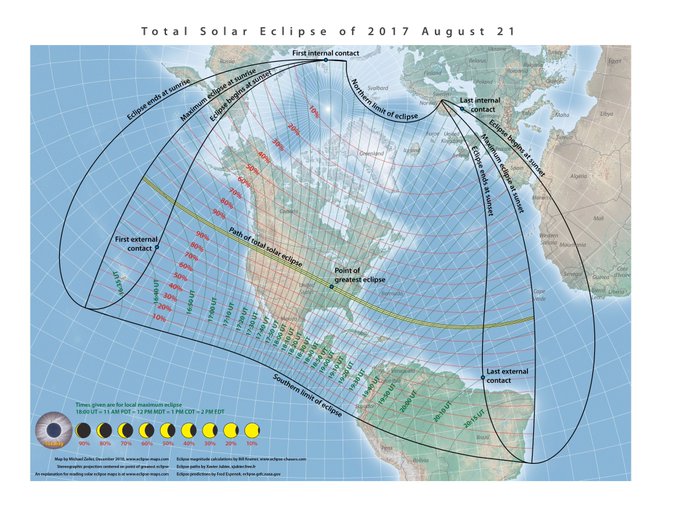 Nina Godlewski International Business TimesAugust 17, 2017NASA and the National Oceanic and Atmospheric Administration are working together to study the way severe storms form and intensify and they’re using their odd-looking Globe Hawk autonomous aircraft to do so.The craft looks kind of like a jet but it has no windows at the front where a normal jet would for the pilots to see and the back half of it resembles a double-decker plane. It’s also smaller than a jet and flies higher than most jets at 60,000 feet. Rather than transporting any material or people the craft flies high in the sky for up to 24 hours andtakes measurements of storm systems.With a wingspan of roughly 116 feet, a length of 44 feet and a height of 15 feet the craft isn’t anywhere close to the size of a jet. It boasts a range of 8,500 miles and has a portable ground control station that it can easily connect to to transit on-board data that it’s collecting while high in the sky.

View photosglobal hawkNASA’s autonomous Global Hawk aircraft collects data during storms. Photo: NASA/Lauren HughesThe scientific payload the craft carries includes instruments designed to measure wind velocity, pressure, temperature, humidity, moisture levels in clouds and the structure of storm systems while flying. The instruments are so sophisticated that they can measure these elements of storms in a variety of ways including measuring them vertically rather than just in the spot where the craft is.NASA and NOAA will be using the Globe Hawk for the Hands-On Project Experience Eastern Pacific Origins and Characteristics of Hurricanes campaign to learn about storms in the Northern Hemisphere. Generally for this research the craft stays in the Eastern Pacific Ocean but it could be sent to the Atlantic if need be. A primary goal of the campaign is to better understand storm intensification to help predict storms in the future as they become more frequent and cause expensive and sometimes life-threatening damage.The craft’s ability to autonomously fly at high altitudes while it takes measurements opens a new door for science research in situations and areas in the world that aren’t easy or practical to monitor with manned aircraft or with satellites. The craft can take on different instruments depending on what conditions it will monitor which makes it more versatile for such research. It was originally designed as an unmanned surveillance craft for the Air Force.

View photosglobal hawk craftThe Global Hawk craft is an autonomous NASA craft that can measure temperature, humidity, pressure and more factors of storms. Photo: NASAIt was first used by NASA to track and measure Tropical Storm Franklin in the Gulf of Campeche and has since been used for measurements by NOAA of Hurricane Gaston,Tropical storm Erika and others.NOAA recently updated the hurricane outlook as we head into the Atlantic hurricane season. Originally the season was predicted to come in around average but now the expectations have been increased to an above normal season because of the number of storms that there have already been so far. The season is expected to bring more storms, some that might pop up unexpectedly like the recent Tropical Storm Emily in Florida, meaning more opportunities for the Global Hawk to gather valuable data.

ReutersAugust 17, 2017 PARIS (Reuters) – Euronext wheat slipped to new contract lows on Thursday as a bumper harvest in the Black Sea export region hung over international markets, while spot futures also faced technical pressure.December milling wheat, the most active contract on the Paris-based Euronext exchange, settled down 0.75 euro at 162.50 euros a tonne, after touching a contract low of 161.00 euros.Front-month September fell more sharply, giving up as much as 3.75 euros to hit a contract low of 155.00 euros, which also marked a new eight-month low for a spot price. It later settled 2.25 euros lower at 156.50 euros.Selling pressure on the front month increased following Tuesday’s expiry of options against September futures.”There was a lack of buying interest in September futures from financial investors after the options expired and there was rolling of positions toward December,” one dealer said.Euronext also continued to be curbed by weaker U.S. wheat futures and signs that big harvests in Russia and elsewhere in the Black Sea zone were intensifying export competition.A tender by Egypt on Wednesday, in which the world’s largest wheat importer booked 295,000 tonnes of Russian wheat and 60,000 tonnes of Ukraine wheat, drew offers totaling around 1 million tonnes of Russian wheat.”There is just an avalanche of Russian wheat,” one trader said.Weekly European Union data showed 2017/18 soft wheat exports from the bloc had reached 1.5 million tonnes by Aug. 15, down 60 percent from the same period last season.Traders were also awaiting a clearer picture of wheat quality in Germany and elsewhere in northern Europe, where rain has slowed harvesting and threatened to lower milling quality.(Reporting by Gus Trompiz; Editing by Susan Fenton)

A Look at The Solar System’s Most Intense Storms

Photo credit: NASAFrom Popular MechanicsHurricane season is upon us, and everyone within a few hundred miles of the Atlantic Ocean is preparing for the inevitable disaster to come. But if you’re worried about a hurricane making landfall in your town, just remember it could be worse: You could live on Jupiter.While Earth’s storms are pretty intense, they pale in comparison to storms elsewhere in the solar system. Jupiter’s Great Red Spot is a storm more than twice as wide as the Earth, with winds traveling upwards of 250 miles per hour. Saturn’s polar vortex is even bigger, measuring 20,000 miles across, while Neptune’s recent Great Dark Spot clocked winds at 1,500 miles per hour.PBS Space Time takes a look at some of these giant storms and talks about how they got to be so big:Hurricanes here on Earth are formed from areas of low pressure over warm ocean water. The low pressure region sucks in air and water into a swirling vortex, which produces the well-known hurricane shape. As long as the hurricane has access to warm water the storm will continue to survive and grow in strength.On Jupiter, there are no oceans or no low pressure zones. Instead, Jovian storms are powered by the gravitational collapse of the planet itself. Every year, Jupiter shrinks by about an inch, and much of that extra energy goes toward fueling the raging storms on the planet’s surface.Even though we know a great deal about the Great Red Spot and other giant storms, there’s still a lot of questions we haven’t answered yet. How did the Great Red Spot last so long? Why is it getting smaller? Is it going to die?To answer these questions and more, NASA sent the Juno spacecraft to orbit Jupiter for two years, gathering data on every part of the Jovian system. It’s already captured the highest-resolution images of Jupiter ever, and by the time the mission ends we may know nearly all there is to know about the most powerful storms in the solar system.Source: PBS Space Time