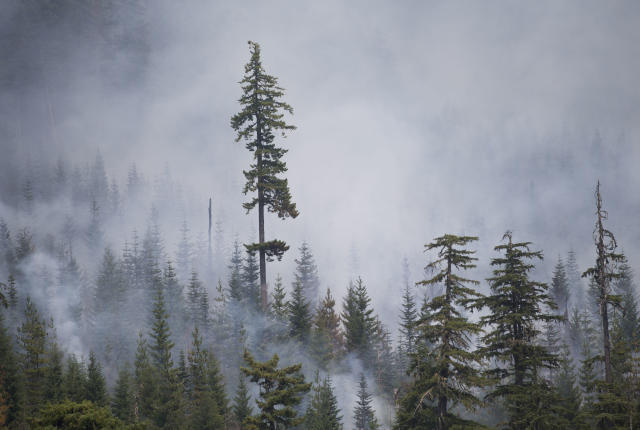 SISTERS, Ore. (AP) — Evacuation orders affecting hundreds of people were issued in California and Oregon as wildfires neared small towns, including one that’s a prime location for viewing the eclipse.About 600 residents were told to leave the tourist town of Sisters, Oregon, and authorities said Saturday another 1,000 people had been told to be ready to leave if necessary.Sisters is located on the edge of a 70-mile swath of the state where the moon will completely blot out the sun.No structures had been lost and no injuries have been reported since the fire began last week. The cause is under investigation.Crews were expecting a tough day Saturday with winds gusting to more than 20 mph.On Monday, they will have to contend with the solar eclipse that fire officials say will ground all firefighting helicopters and most fixed-wing aircraft for about 35 minutes as the moon’s shadow passes over the area.Shopkeepers were hoping the fire would not inhibit business as tourists arrive to watch the eclipse.”If you look up at the sky it’s not an orange cloud anymore,” said Andrew Bourgerie, co-owner of Sisters Bakery. „So it’s simmering down a little bit.”Some campsites and recreational areas were shut down due to the 12-square-mile (31-square kilometer) wildfire in Deschutes National Forest that jumped fire lines Friday.Officials say the blaze is producing heavy smoke while burning in forests at higher elevations and sagebrush in lower areas.”We have a few days before the eclipse to see if the smoke is in the area,” fire spokeswoman Lisa Clark said.Officials said only aircraft with instruments allowing them to fly at night can fight the fire during the eclipse. Clark said that eliminates the bulk of the firefighting fleet, though large air tankers will be able to fly.In California, authorities issued an evacuation order for the small town of Wawona as a week-old fire in Yosemite National Park grew and air quality reached a hazardous level.The U.S. Forest Service said the fire grew to more than 4 square miles (more than 10.36 sq. kilometers) overnight due to winds from thunderstorms. Authorities ordered people to leave as air quality was expected to worsen.Wawona, with a population of 1,000 to 2,000 people at any given time, is less than 2 miles (less than 3.22 kilometers) from the fire. The evacuation order included the historic Big Trees Lodge, formerly known as the Wawona Hotel.The fire has closed campgrounds and trails in the national park since it began a week ago. It was 10 percent contained.In Montana, 155 National Guard troops arrived to monitor about three dozen security checkpoints in an area south of Missoula that was evacuated due to a fire that flared up after burning since at least July 15.The fire destroyed two homes and several outbuildings Thursday. It burned an additional 14 square miles Friday and has charred an estimated 44 square miles (113.96 sq. kilometers) of wooded, mountainous terrain west of Lolo.The troops will relieve law enforcement officers so they can return to other duties.The Missoulian reported that heavy smoke has settled into valleys and officials warned of poor air quality.Idaho’s two largest wildfires were burning mostly in wilderness areas.One fire burned 17 square miles (44 square kilometers) in Frank Church River of No Return Wilderness, and another in Gospel Hump Wilderness had burned 21 square miles (54 square kilometers).In Arizona, officials say charges have been dismissed against Gene Carpenter, 54, who was arrested on suspicion of operating his drone in restricted airspace over a fire in June.Deputy Yavapai County Attorney Dennis McGrane said new evidence was being investigated.

Associated PressAugust 20, 2017 MEXICO CITY (AP) — Tropical Storm Harvey weakened into a depression as it moved through the Caribbean Sea on Saturday on a projected course that would have it approaching Central America and the Yucatan Peninsula early next week.Related SearchesTropical Storm HarveyTropical Storm Yucatán PeninsulaFranklin Tropical StormThe U.S. National Hurricane Center reported that Harvey was centered about 140 miles (225 kilometers) north-northwest of Curacao and was heading west at 22 mph (35 kph). The storm had maximum sustained winds of 35 mph (55 kph).The centers said Harvey could regain its tropical storm status on Sunday or Sunday night.It said heavy rains were possible Saturday over Aruba, Bonaire and Curacao.Another tropical storm, Kenneth, was far out in the Pacific Ocean off Mexico and moving away from land.The hurricane center said Kenneth was expected to strengthen somewhat during the next 48 hours and could become a hurricane.

U.S.Father jumps car over open drawbridge in terrifying stunt to save family 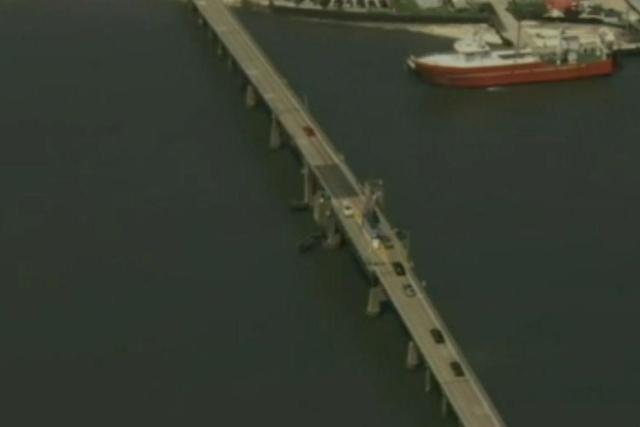 A father drove his car over an opening drawbridge in a death-defying stunt to avoid plunging into the water below.Terence Naphys was crossing New Jersey’s Middle Thorofare Bridge with his family when its steel ramp began to lift beneath them.Mr Naphys was reportedly already near the centre of the bridge and was forced to accelerate his Toyota RAV 4 to jump the 6ft gap out of fear the car would fall 65ft into the deep bay below.The vehicle flew through the air and landed safety on the other side.”It’s scary what’s going through your mind. We could have all landed in the water, Mr Naphys told NBC Philadelphia.He added: „I will never ever drive that bridge or probably any drawbridge again.”No one was hurt but the vehicle sustained $10,000 (£7,800) damage.Mr Naphys was on holiday his wife Jacquelyn, daughter Kaity, 16, and her 16-year-old friend, when the incident happened. They had been travelling from Wildwoods to Cape May, which are connected by the bridge, to go for dinner on August 1.An operator is thought to have been temporarily blinded by sun glare as he opened the drawbridge to let a fishing vessel pass.The operator believed the family’s car had already safely passed over. 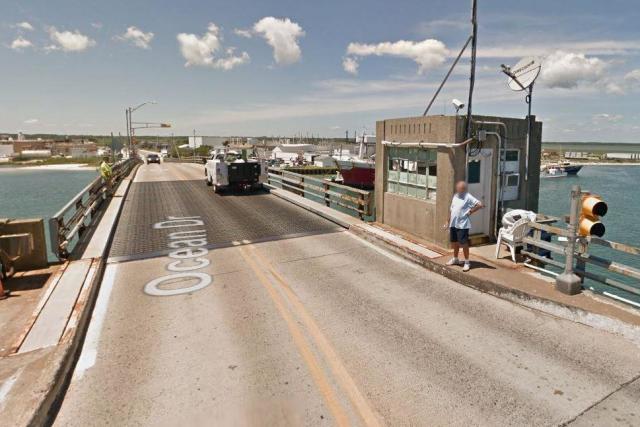 Mrs Naphys noticed the bridge lifting and alerted her husband.“It wasn’t until we were at the very edge when I saw the bridge might be opening,” she told the Courier-Post.“I wasn’t nervous until we landed. That’s when we realised the bridge wasn’t just a little bit open.”Cape May County Bridge Commission has launched an investigation into the incident.The bridge was built in 1940 and needs as much as $200 million (£155m) worth of repairs and renovations, according to officials.

ReutersAugust 19, 2017 ZURICH (Reuters) – An intense storm ripped through a beer tent in northwestern Austria, killing two people and injuring at least 40 more, Austrian media reported late on Friday.About 700 people were in the tent erected for a local volunteer fire department festival in St. Johann am Walde, located northeast of Salzburg, when the storm hit suddenly at about 2030 GMT.A man and a woman, both around 20 years old, died, the Austrian Press Agency reported.Of those injured, 10 suffered serious injuries, media reported, without providing specifics.About 150 rescue personnel responded to the incident, which left debris strewn across a large area, according to photographs of the scene.

World Watch the solar eclipse live on Twitter thanks to the Weather Channel Tech News Tube Fri, Aug 18 2:02 AM PDT

On Monday August 21, people across the US will have the chance to witness a total solar eclipse. While there is a great deal of excitement about the phenomenon, viewers need to be careful to use special eclipse glasses (not just sunglasses) or some form of projection technique to avoid serious eye… …But perhaps the safest option is to watch the eclipse on your computer screen or mobile. Twitter has teamed up with the Weather Channel to provide a live stream, so even if you’re not in the path of totality, there’s no need to miss out.The live stream will feature live footage from Idaho, Illinois, Missouri, Nebraska, Kentucky, Oregon, South Carolina, Tennessee and Wyoming, and it all kicks off at 12pm EST. The stream will be presented by meteorologists Ari Sarsalari and Domenica Davis, and it will include footage provided by NASA.In a Tweet, the Weather Channel reveals the times at which you’ll be able to witness the eclipse across the US:Join us for a never-before-seen digital experience: a live stream event of #Eclipse2017! Watch it live on 8/21 at https://t.co/dL1kZCodD3 pic.twitter.com/uZmRllJ7cP— The Weather Channel (@weatherchannel) August 17, 2017When the time comes, you can watch the eclipse at this link.Image credit: Patryk_Kosmider / depositphotos

Melissa ChanTimeAugust 18, 2017Meteorologists are expecting a mostly sunny sky throughout the path of totality for Monday’s total solar eclipse.While it was previously predicted that clouds may obscure next week’s historic event for people in half of the country, the National Weather Service’s final eclipse prediction says that clouds will be minimal.“We’re looking at anywhere from 5 to 20% of cloud cover,” said National Weather Service meteorologist Jim Connolly. “That higher 20% will be in scattered areas.”Early predictions for the highly anticipated celestial spectacle were only showing favorable sky conditions in the Northwest, including Oregon, where the solar eclipse first hits, while parts of the Southeast were expected see heavy cloud cover or even rain.

Related SearchesTotal Solar Eclipse GlassesSolar Eclipse WeatherTotal Solar Eclipse MapTotal Solar Eclipse VideoTotal Solar Eclipse ImagesThere was a chance Columbia could see a thunderstorm before the eclipse, which would affect cloud cover, according to Jim Gandy, chief meteorologist at WLTX, a local TV station in Columbia, S.C.“Totality creates its own weather. As the shadow approaches, the temperature will start to drop and that will stabilize the atmosphere. Clouds up there will begin to dissipate,” said Gandy, citing anecdotal evidence from astronomers. “It creates an opportunity for the sky to open up to see the eclipse.”The total solar eclipse on Aug. 21 will cross the country from coast to coast and be visible only in America for the first time in the nation’s history.It will pass through parts of 14 states, beginning in Oregon and continuing through Idaho, Wyoming, Montana, Nebraska, Iowa, Kansas, Missouri, Illinois, Kentucky, Tennessee, Georgia and North Carolina before ending in South Carolina.

ABC News VideosAugust 20, 2017 The USS Indianapolis went down under enemy fire during World War II in one of the worst disasters in U.S. Naval history. The Navy came under criticism for court-martialing the ship’s captain, who was later exonerated.22:16Dec. 6, 1998: 20/20: The mysterious case of the USS IndianapolisABC News Videos