In Texas, Distrust of Washington Collides With Need for Federal Aid

The New York Times By RICHARD FAUSSET 1 hr ago

Worries of rift between Trump and South Korea grow

© Alyssa Schukar for The New York Times Civilians, the National Guard and the Houston police came together to help residents in need of evacuation.Few places need the federal government right now more than Texas does, as it begins to recover from Hurricane Harvey. Yet there are few states where the federal government is viewed with more resentment, suspicion and scorn.For Republicans, who dominate Texas government, anti-Washington sentiment is more than just a red-meat rhetorical flourish — it is a guiding principle. Gov. Greg Abbott, the Republican former state attorney general, once described a typical day in his old job as, “I go into the office, I sue the federal government and I go home.” His predecessor as governor, Rick Perry, wrote a book titled “Fed Up! Our Fight to Save America From Washington.”The sentiment is not limited to politicians. In June, the legislature of Texas Boys State — the mock-government exercise for high schoolers, run by the American Legion — voted overwhelmingly to secede from the union.Sign Up For the Morning Briefing NewsletterNow, though, it is Texas Republicans who will be crucial in securing, and helping to administer, what is likely to be one of the most ambitious and costly federal disaster-relief packages in American history, one that will almost certainly run to tens of billions of dollars.There are few doubts that a Republican-dominated Congress will end up delivering aid to a battered state and key base of Republican power. But along with an outpouring of support, the process is raising eyebrows and drawing charges of hypocrisy.What this means for Texas politics is difficult to say, at a time when rescue crews and volunteers are still plucking flood victims from their homes. But the new reality is already making itself felt.Most notably, Senator Ted Cruz, one of Washington’s most ardent proponents of fiscal restraint, has suddenly taken on a new role, promising to lead the effort to secure a generous federal aid package.In 2013, in a move his critics consider infamous, Mr. Cruz joined more than 20 of his Texas colleagues in Congress in voting against a $50.5 billion relief package for victims of Hurricane Sandy, saying that the bill was larded with pork projects unrelated to rebuilding the battered Northeast coast. (The bill passed regardless.)Last week, Mr. Cruz was all over the Texas flood zone, promising that Congress would provide “very significant resources for the people who have been damaged by this terrible storm.” Gov. Chris Christie of New Jersey, a fellow Republican, was moved to public outrage.“I have no sympathy for this — and I see Senator Cruz, and it’s disgusting to me that he stands in a recovery center with victims standing behind him as a backdrop,” Mr. Christie, whose state was among the hardest hit by the 2012 storm, said on CNN.Mr. Cruz last week continued to defend his 2013 vote, arguing that more than two-thirds of the Hurricane Sandy relief bill went to nonemergency spending, an assertion that fact checkers have found to be largely untrue. But in Texas, some conservatives say that Mr. Cruz’s actions, both then and now, square with their principles of fiscal prudence and the proper role of government.

Rising from the ruins of Hurricane Harvey 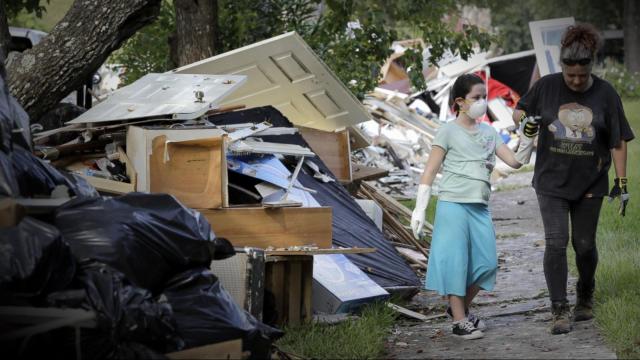 Neighbors are helping neighbors through the devastation of a monster storm.