Who Trades With North Korea and What Can Trump do About it?

Sofia Lotto Persio,Newsweek 10 hours ago  For once, President Donald Trump’s reaction to North Korea’s provocation did not include direct threats of military action, but of trade restrictions instead.After North Korea claimed to have successfully tested a hydrogen bomb, its sixth and largest nuclear test to date, Trump threatened consequences for countries doing business with Pyongyang.“The United States is considering, in addition to other options, stopping all trade with any country doing business with North Korea,” he wrote. But which countries is Trump talking about?Trending: Trump Moves to Scrap South Korean Warhead Weight Limit, Enabling Greater Force for North Korean AttackAbove all, China. Beijing is North Korea’s major defense and business partner, counting for an estimated 90 percent of Pyongyang’s total trade. Other countries taking up the remaining share of North Korea’s trade include Russia, Thailand, the Philippines, Taiwan, France, Singapore and Mexico, as data reported by the Observatory of Economic Complexity shows. 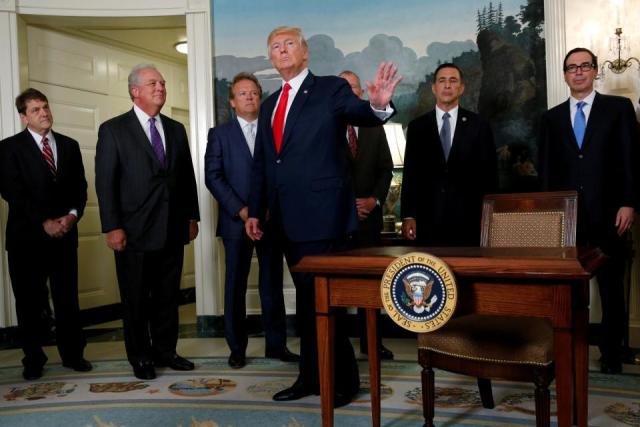 U.S. President Donald Trump stops for a reporter’s question after signing a memorandum directing the U.S. Trade Representative to complete a review of trade issues with China at the White House in Washington, U.S. August 14. The president said the U.S. would consider stopping trade with entities that do business with North Korea. Jonathan Ernst/Reuters Treasury Secretary Steve Mnuchin told Fox News he supported Trump’s idea. “If countries want to do business with the United States, they obviously will be working with our allies and others to cut off North Korea economically,” he said.However, trade experts believe the president’s threat to be empty, as the repercussions on the American economy would be significant—especially as China is one of the U.S.’ largest trade partners.“It would be very difficult for the U.S. to take such extreme measures as putting wide-ranging direct trade sanctions on China. Bilateral trade in goods and services between China and the US reached $648 billion in 2016. Any disruption to such large trade flows could create significant risks to manufacturing supply chains,” Rajiv Biswas, Asia Pacific Chief Economist at IHS Markit, told Newsweek.Don’t miss: ISIS Is Increasingly Trying to Attract Women Fighters In Iraq And SyriaMatthew Goodman, senior adviser for Asian economics at the Center for Strategic & International Studies, went so far as to call the proposal “absurd.” Goodman responded to a tweet from Ari Fleischer, a former White House press secretary for President George W. Bush, who said that “cutting off all trade” isn’t wrong to avert war.“With the adversary, maybe—but with China, Mexico, and France, which together trade more than $1 trillion with us? Absurd,” he wrote.Besides the unanimously approved U.N. Security Council sanctions against North Korea, the U.S. has also implemented its own sanctions, targeting third country entities and persons trading with North Korea in the Countering America’s Adversaries Through Sanctions Act signed into law last month.Later in August, the Treasury’s Office of Foreign Assets Control announced new sanctions against 10 entities and six individuals from China and Russia that were found to support North Korean regime’s nuclear development program in violation of U.N. resolutions.Most popular: China ‘Will Not Allow Chaos And War On The Peninsula’ Ambassador Says As U.S. Mulls Response To North Korea Nuclear TestThe U.S. sanctions also targeted countries involved in exporting North Korean workers abroad, restrictions that could now be implemented at U.N. level in future sanctions to force North Korea back to the negotiating table. “As North Korean worker remittances of foreign exchange back to North Korea are a major source of foreign exchange earnings for North Korea, curtailing this source of remittance flows is an important measure for further increasing economic pressure on North Korea,” Biswas said.China is ramping up its broader economic sanctions on North Korea “to an unprecedented scale,” Biswas said, but Pyongyang is still able to receive significant currency inflows from remittances of North Korean guest workers in Russia and China.  At an emergency meeting of the U.N. Security Council on Monday, U.N. ambassador for the U.S. Nikki Haley said „The time has come to exhaust diplomatic means before it’s too late.”“The time for half measures in the Security Council is over. The time has come to exhaust all of our diplomatic means before it is too late. We must now adopt the strongest possible measures. Kim Jong Un’s action cannot be seen as defensive,” she said, The Hill reported.According to Biswas, if the international community is serious about bringing North Korea back to the negotiating table and avoiding military confrontation, severe economic sanctions banning fuel exports, as well as barring workers from sending home their remittances, are the last peaceful option left. While North Korea likely has fuel stockpiles to last several months, he believes sanctions would, in the long term, affect both economic and military operations.

On the same day as reports of another North Korean nuclear weapons test surfaced, President Donald Trump criticized U.S. ally South Korea, accusing its new president of “appeasement” for supporting dialogue to avoid nuclear weapons proliferation on the Korean Peninsula.“South Korea is finding, as I have told them, that their talk of appeasement with North Korea will not work, they only understand one thing!” Trump tweeted Sunday morning.

Trump’s comments came a day after reports emerged that the president instructed advisers to prepare to withdraw the United States from a free-trade agreement with South Korea. As president, Trump has promised to fight what he views as unfair trade competition. But the Washington Post reported Saturday that the president’s top national security and economic advisers are pushing him to abandon his plan to sever trade ties with South Korea, saying it would hamper U.S. economic growth and harm ties with an important ally.Follow

Donald J. Trump @realDonaldTrumpSouth Korea is finding, as I have told them, that their talk of appeasement with North Korea will not work, they only understand one thing!2:46 PM – Sep 3, 2017Ely Ratner, a top national security official in the Obama administration, told the New York Times that Trump is “coming out swinging” at South Korea and China at a time when the United States is going to need close cooperation with the two countries. Sen. Jeff Flake (R-AZ) told CNN on Sunday that he opposes undoing the trade agreement with South Korea and found the move by the Trump administration a “troubling sign.”Sen. Chris Murphy (D-CT), a member of the Senate Foreign Relations Committee, responded to Trump with his own tweet: “Foreign policy, unhinged. Find me one expert whose advice on how to deal with North Korea is ‘Pick a fight with South Korea.’” Follow

Chris Murphy @ChrisMurphyCTForeign policy, unhinged. Find me one expert whose advice on how to deal with North Korea is „Pick a fight with South Korea”. https://twitter.com/realdonaldtrump/status/904309527381716992 …4:24 PM – Sep 3, 2017The critical tweets on South Korea and the provocative statements directed toward North Korea are leading experts to question whether Trump fully grasps the seriousness of the situation on the Korean Peninsula. “That the administration would even consider canceling the agreement in the midst of the North Korean missile and nuclear crisis is astonishing,” Michael Green, an Asia expert at the Center for Strategic and International Studies, told the New York Times. “It’s probably all theater, but it has negative strategic consequences as we try to manage the North Korean threat.”Trump provocatively vowed last month that North Korea “will be met with fire and fury like the world has never seen” — an action that would presumably kill hundreds of thousands of North Korean civilians — if the nation’s regime didn’t back away from its nuclear weapons testing program.A month later, North Korea announced it had tested its largest ever nuclear device and is in possession of a powerful hydrogen bomb capable of being mounted on a long-range missile. Upon leaving church Sunday morning, Trump reportedly said “we’ll see” when asked whether he plans to order the U.S. military to attack North Korea, and tweeted shortly thereafter that he was gathering Chief of Staff John Kelly, Defense Secretary James Mattis, and other military advisors at the White House to discuss North Korea.Last week, Trump tweeted that “talking is not the answer” in terms of dealing with North Korea, even though most experts and international leaders, including South Korea President Moon Jae-in, have argued for continuing dialogue with North Korea over its nuclear program.