David Knowles,Yahoo News•August 2, 2018 The White House won’t say that the press is not the enemy of the people Yahoo News Video 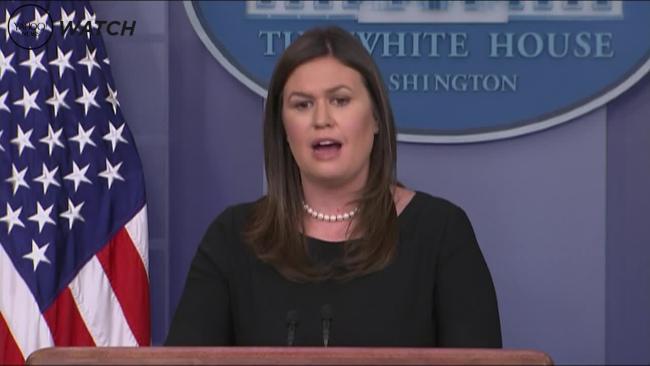 Scroll back up to restore default view.Think of it as a gathering just between enemies.During Thursday’s press briefing, White House press secretary Sarah Sanders was asked to weigh in on Ivanka Trump’s remarks at a public forum in which she stated that she did not agree with her father’s characterization of the media as “the enemy of the people.”“The president is rightfully frustrated,” Sanders said. “Ninety percent of the coverage on him is negative despite the fact that the economy is booming, ISIS is on the run and American leadership is being reasserted around the world.”But the real fireworks came later in the briefing, when CNN White House reporter Jim Acosta pressed Sanders to publicly state that the media is not “the enemy of the people.”“You read off a laundry list of your concerns about the press, and things that you feel are misreported, but you did not say that the press is not the ‘enemy of the people.’ I think it would be a good thing if you were to say right here, at this briefing, whether the press, the people gathered in this room right now, doing their jobs every day,  asking questions of officials like the ones you brought forward earlier, are not the ‘enemy of the people.’ I think we deserve that.”Sanders, however, didn’t bite and made clear, reading off a prepared list at the podium, her own personal animus toward the press.“It’s ironic, Jim, that not only you and the media attack the president for his rhetoric, when they frequently lower the level of conversation in this country. Repeatedly, repeatedly, the media resorts to personal attacks without any content other than to incite anger,” Sanders said. “The media has attacked me personally on a number of occasions, including on your own network. Said I should be harassed as a life sentence, that I should be choked. ICE officials are not welcome in their place of worship and their personal information is shared on the Internet. When I was hosted by the Correspondents Association, of which almost all of you are members of, you brought a comedian up to attack my appearance and call me a traitor to my own gender. In fact, as far as I know, I’m the first press secretary in the history of the United States that’s required Secret Service protection. The media continues to ratchet up the verbal assault against the president and everyone in his administration, and certainly we have a role to play, but the media has a role to play for the discourse in this country as well.”Acosta, fresh off covering a rowdy Trump rally in Tampa on Tuesday at which audience members continually taunted him and other members of the press, expressed dismay at Sanders’s answer.“You did not say in the course of those remarks that you just made that the press is not the ‘enemy of the people.’ Are we to take it that what you just said, we all get put through the ringer, we all get put in the meat grinder in this town, and you’re no exception, and I’m sorry that that happened to you. I wish that that had not happened,” Acosta said. “But for sake of this room, for the people that are in this room, this democracy, this country, all the people around the world are watching what you’re saying, Sarah, and the White House for the United States of America, the president of the United States should not refer to us as the ‘enemy of the people.’ His own daughter acknowledges that and all I’m asking you to do, Sarah, is to acknowledge that right now and right here.”Once again, the press secretary declined Acosta’s request.“I appreciate your passion. I share it. I’ve addressed this question. I’ve addressed my personal feelings. I’m here to speak on behalf of the president. He’s made his comments clear,” Sanders said.Moments after the heated exchange, Acosta vented on Twitter.The back-and-forth seemed to epitomize the growing national divide between the president’s supporters and the mainstream media that reports on the White House.On his own network, Acosta was asked about the exchange.“Maybe we should make some bumper stickers. Make some buttons. Maybe we should go out on Pennsylvania Avenue like these folks who chant ‘CNN sucks!’ and ‘fake news,’ maybe we should go out, all journalists should go out on Pennsylvania Avenue and chant, ‘We’re not the enemy of the people.’ Because I’m tired of this, honestly, I’m tired of this. It is not right. It is not fair. It is not just. It is un-American,” Acosta said, adding, “Ivanka Trump knows that. I don’t know why her father doesn’t. And I don’t know why this press secretary doesn’t. I mean, she got yelled at at a restaurant in Virginia. I’m sorry about that. And a comedian at a correspondents’ dinner said some unpleasant things about her. I’m sorry about that. She ought to hear some of the things that were said to me the other night in Tampa.”CNN wasn’t alone in highlighting the on-camera feud. The Republican National Committee quickly cut a clip from the briefing and tweeted it out to its followers.But Trump’s qualification was belied by the fact that his own definition of what news organizations count as “fake news” includes many of those that hold White House press credentials.