1 / 39WPA Pool via Getty Images President Trump state visit to UK, day two Prime Minister Theresa May hosts a business roundtable event with U.S President Donald Trump at St. James’s Palace. (Tim Ireland – WPA Pool/Getty Images)President Trump met Prime Minister Theresa May for ‘substantial talks’ on day two of his state visit – as protesters demonstrated against him in central London.Mr Trump had attended a breakfast meeting on Tuesday morning at St James’s Palace with Mrs May, before the pair, along with Philip May and First Lady Melania Trump, posed for the media at a lunchtime Downing Street photocall.However, anti-Trump protesters once again inflated the infamous ‘Trump baby blimp’ on Parliament Square outside Westminster as he met the Prime Minister.The 20ft orange inflatable took to the skies for two hours after its owners reached their fundraising target and permission was granted by the Greater London Authority.Elsewhere, organisers of the Together Against Trump protest billed their demo as a “carnival of resistance”, with campaigners gathering at Trafalgar Square from 11am to declare a “Trump-free zone”.

LONDON (AP) — Queen Elizabeth II is set to join British Prime Minister Theresa May, other world leaders and World War II veteran on the southern coast of England on Wednesday to honor the Allied soldiers who risked and gave their lives in large numbers 75 years ago for the D-Day invasion that helped liberate Europe from Nazi Germany.

Britain promised „unprecedented commemorations” in Portsmouth. Testimony from some of the more than 300 World War II veterans expected there and „one of the greatest British military spectacles in recent years” featuring a flyby of 24 vintage and modern military aircraft on the schedule.

But the event, which kicks off two days of D-Day anniversary observances, is intended to be a tribute to the soldiers who shaped history during the dangerous mission to reach beachheads and fight in German-occupied France.

„The Normandy landings 75 years ago were a moment of historic international cooperation,” May said. „And it is right that at the heart of today’s commemorations are the veterans who fought to secure the liberty and the peace that we now enjoy.”

Planning to attend are presidents, prime ministers and other representatives of the countries that fought alongside Britain in Normandy: the United States, Canada, Australia, Belgium, the Czech Republic, Slovakia, Luxembourg, Denmark, France, Greece, the Netherlands, New Zealand, Norway and Poland.

The leader of the country that was the enemy in 1944, German Chancellor Angela Merkel, also was invited.

In Portsmouth, dignitaries plan to read from historical documents linked to D-Day. In May’s case, it’s a letter written by Capt. Norman Skinner of the Royal Army Service Corps to his wife, Gladys, on June 3, 1944, a few days before the invasion. It was in his pocket when he landed in Normandy.

„I can imagine you in the garden having tea with Janey and Anne getting ready to put them to bed,” wrote Skinner, who was killed the day after D-Day. „Although I would give anything to be back with you, I have not yet had any wish at all to back down from the job we have to do.”

The observances will conclude President Donald Trump’s state visit to Britain, which the 93-year-old queen hosted. Elizabeth will be accompanied by her son, Prince Charles, at the event.

The focus shifts to France, where commemorations will be held at simple military cemeteries near the Normandy beaches where Allied troops landed and died.

Follow all the AP’s coverage of D-Day at https://apnews.com/WorldWarII

LONDON (Reuters) – U.S. President Donald Trump said he was prepared to talk to Iranian President Hassan Rouhani but that there was always a chance of U.S. military action against the Islamic Republic.

„So Iran is a place that was extremely hostile when I first came into office,” Trump told British television station ITV. „They were a terrorist nation number one in the world at that time and probably maybe are today.”

He said, when asked, that he was prepared to talk to Rouhani: „Yeah of course. I would much rather talk.”

JORDYN PHELPS
Good Morning AmericaJune 4, 2019
0:02
2:54
Trump says it will be ‘foolish’ for Republicans to block tariffs on Mexico

U.K. Prime Minister Theresa May stressed the importance of the U.S.- U.K. „special relationship” in dealing with Iran, but noted „we stand by the nuclear deal” at a joint news conference on Tuesday with President Donald Trump.

„We can also differ sometimes on how to confront the challenges we face,” May said as both leaders noted the importance of their alliance as the 75th anniversary of the D-Day invasion approached.

“I’ve always talked openly with you, Donald, when we have taken a different approach and you’ve done the same with me,” May said to Trump, also highlighting their differences on dealing with climate change on the second day of his visit.

UK Prime Minister Theresa May says she spoke with President Trump about combatting climate change „and our continued support for the Paris agreement.” https://abcn.ws/2IkA7qJ  pic.twitter.com/7zvExqo9nj 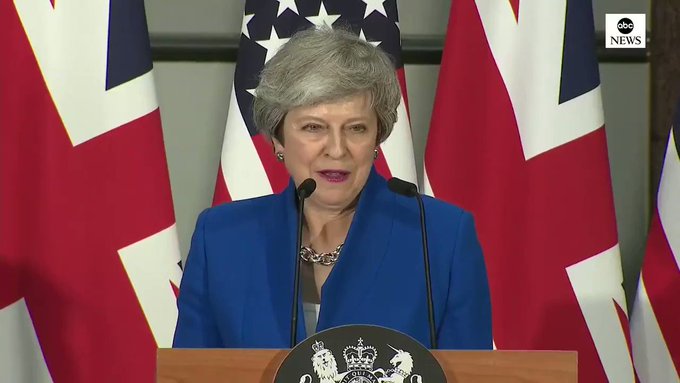 Trump, who withdrew the U.S. from the Iran nuclear deal a year ago, said the two nations must keep Iran from obtaining a nuclear weapon. „I believe that will happen,” said Trump.

The president also was optimistic about a trade deal between the two countries in the wake of Brexit, which he said „should happen.”

„We’re going to have a great and comprehensive trade deal,” the president said. Responding to reports that the U.S. wants private American companies to compete with the U.K.’s National Health Service, Trump said, “Look, I think everything with a trade deal is on the table. When you’re dealing on trade everything is on the table. So NHS or anything else. A lot more than that. But everything will be on the table, absolutely.”

May quickly jumped in to say the U.K. would negotiate a trade deal only in the nation’s best interest.

May pointedly noted that she had declined Trump’s advice to sue over Brexit and still had gotten a good result, although her failure to secure a deal with the European Union has led to her being forced out as prime minister. She leaves office on Friday.

„I would have sued and settled,” Trump responded. „She’s probably a better negotiator than I am,” he continued. „I think you deserve a lot of credit,” he said, in contrast to his earlier harsh criticism of how May had handled the issue. He called her „tremendous” as both leaders repeatedly complimented each other in a friendly exchange despite their differences.

Theresa May says she remembers Trump suggesting she „sue the European Union, which we didn’t do.”

Trump: „I would have sued, but that’s okay. I would have sued and settled, maybe, but you never know. She’s probably a better negotiator than I am” https://abcn.ws/2HVuZKX  pic.twitter.com/adCZjoG1Ni 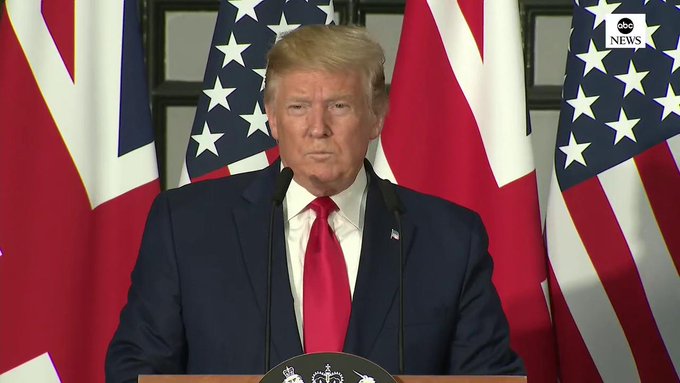 Delving into U.K. domestic politics when asked about his reported phone call with Boris Johnson, a possible successor to May as prime minister, Trump said, „I know Boris, I’ve liked him for a long time, I think he’d do a good job. „

Trump said he hadn’t seen much in the way of protests, including one featuring a giant „Trump baby” balloon. One was led by Labour Party leader Jeremy Corbyn, whom Trump said he had turned down when he requested a meeting. Trump said he had seen only a „small” protest,” calling news reports about large protests„fake news.”

(MORE: ‘Trump baby’ blimp takes to the sky as mass protests of US president begin in London )

He also called London’s mayor, Sadiq Khan, with whom he has a running feud, „a negative force, not a positive force” who „hurts the people of this great country.”

President Trump may have fallen asleep during the queen’s speech, and he got the royal meme treatment

It has only been about a day since President Donald Trump arrived in the U.K. for his state visit, and things are already interesting. The president got a less-than-warm welcome on June 3rd with a giant penis mowed into a lawn so he’d see it from his flight, and CBS News notes that London citizens greeted him with protests. Still, Trump hasn’t let a little unrest stop him from conducting official business, and he concluded the first day of his trip by attending a state dinner with the royal family (minus Prince Harry and Meghan Markle, who were on new parent duty). During Queen Elizabeth II’s speech that night, however, the president seemed to be nodding off—and naturally, the internet had a field day.

According to Reuters, the June 3rd dinner was the first British state banquet that the Trumps have attended. Both the U.S. president and the British monarch gave speeches honoring the two countries’ relationship. But one Twitter user noticed that while the queen was speaking, the president appeared to be falling asleep. The close-up video of Trump’s face has been retweeted nearly 8,000 times. It’s hard to tell for sure if the president really was resting his eyes or if he was just blinking very slowly, but the video does show his eyelids fluttering a couple of times. He could have been feeling jet-lagged after a day of travel, or maybe all that late-night tweeting finally caught up to him. 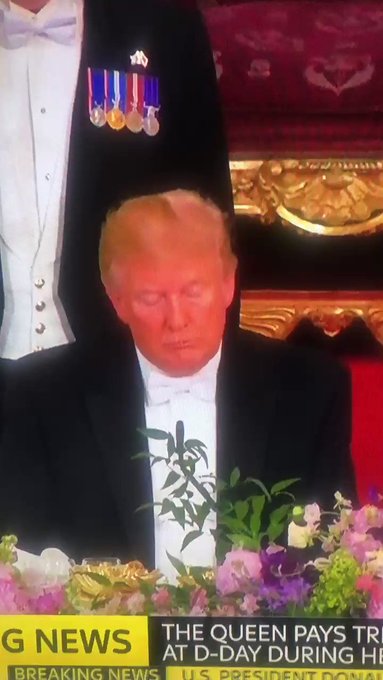 The President of the United States, Donald Trump, falling asleep as Her Majesty The Queen delivers her State banquet speech…

Twitter, however, wasted no time in making the moment a meme.

Some called the president “sleepy” or “low-energy” in reference to his nicknames meant to taunt politicians like Joe Biden and Jeb Bush. 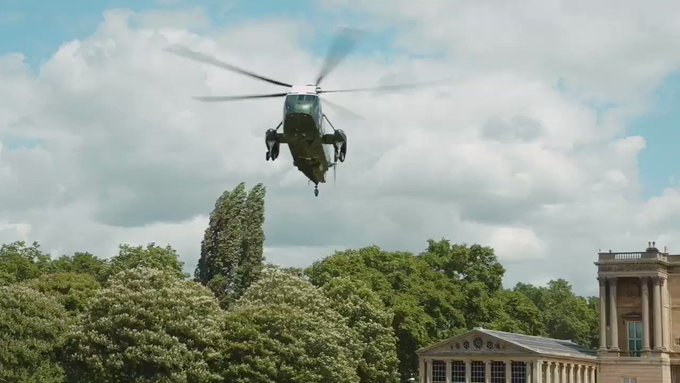 The President of the United States, Donald Trump, falling asleep as Her Majesty The Queen delivers her State banquet speech…

Sadiq Khan‘s office has hit back at „far-right” Donald Trump after the US president launched an extraordinary attack on the London mayor moments ahead of landing in the UK.

Minutes before touching down outside the capital aboard Air Force One, Mr Trump branded Mr Khan a „stone cold loser” who had done a „terrible job” as mayor.

„Kahn (sic) reminds me very much of our very dumb and incompetent Mayor of NYC, de Blasio, who has also done a terrible job – only half his height,” Mr Trump tweeted on Monday morning.

In response, a spokesperson for Mr Khan said: „This is much more serious than childish insults which should be beneath the President of the United States.

„Sadiq is representing the progressive values of London and our country warning that Donald Trump is the most egregious example of a growing far-right threat around the globe, which is putting at risk the basic values that have defined our liberal democracies for more than 70 years.”

The war of words was sparked when Mr Khan described the US president over the weekend as „just one of the most egregious examples of a growing global threat” and compared the language he had used to that of the „fascists of the 20th century”.

After landing at Stansted Airport, Mr Trump was due to head from there to Buckingham Palace for a reception with the Queen, Prince of Wales and the Duchess of Cornwall.

The Duke of Sussex will also attend a private lunch at the palace – although his wife, who is on maternity leave, will be at home with their four-week-old son, Archie.