Video Not Available President Trump promised he wouldn’t allow the CIA to use spies against North Korean dictator Kim Jong Un after reports surfaced that Kim’s half brother had been a U.S. intelligence asset before he was assassinated in Malaysia.Kim Jong Nam was killed in February 2017 — allegedly while he was en route to meet a CIA contact — by two women who sprayed a nerve agent in his face. U.S. officials quickly placed the blame for the killing on North Korea.Trump, speaking to reporters on the White House lawn Tuesday before leaving on a campaign trip to Iowa, was asked about Kim Jong Nam’s spying, which was first reported by the Wall Street Journal.“I don’t know, I have not heard about that,” the president said, before contradicting himself and assuring Kim Jong Un that his administration wouldn’t do anything so underhanded.“I saw the information about the CIA with respect to his brother or half brother, and I would tell him that would not happen under my auspices, that’s for sure,” Trump said. “I wouldn’t let that happen under my auspices.”

President Trump speaks to reporters on the South Lawn of the White House on Tuesday before departing for a trip to Iowa. (AP Photo/Evan Vucci)The president, as he has in the past, lavished praise on Kim and expressed gratitude for his friendship.“I just received a beautiful letter from Kim Jong Un. I can’t show you the letter, obviously, but it was very personal, very warm, very nice letter,” Trump said.“North Korea, under his leadership, has great potential,” Trump continued.A deal to denuclearize North Korea has proven elusive to Trump, despite two high-profile summits with Kim. In February, Trump walked out of his second round of meetings with Kim without reaching an agreement. Still, Trump offered compliments to the dictator, calling their relationship “very strong” and describing Kim as “quite a guy and quite a character.”Less than two months after the failed summit in Vietnam, North Korea resumed testing new weapons.On Tuesday, Trump once again had far more negative things to say about Democratic political rival Joe Biden — who has been sharply critical of North Korea — than he did about Kim. While he described Kim as someone “who gets it,” he blasted Biden as “a dummy.”

Washington (AFP) – John Dean, the White House lawyer who helped bring about the Watergate downfall of Richard Nixon, told Congress Monday that there are „remarkable” similarities between the former president’s illegal behavior and alleged acts of obstruction by Donald Trump.

Dean told the House Judiciary Committee that the Mueller report, which outlines 10 possible acts of obstruction by Trump, is equivalent to the famous „road map” that prosecutor Leon Jaworski delivered to Congress in 1974, sparking impeachment proceedings against Nixon and forcing his resignation.

„In many ways the Mueller Report is to President Trump what the so-called Watergate roadmap… was to President Richard Nixon,” the 80-year-old Dean told the House Judiciary Committee.

There were „remarkable parallels” between the two, especially related to obstruction of justice, said Dean, who as Nixon’s White House counsel was deeply involved in illegal efforts to stifle the Watergate probe.

One of those parallels, Dean noted, was the primary role in Trump’s alleged obstruction efforts of former White House counsel Don McGahn, a main source for the Mueller investigation.

McGahn, who has been prevented by the White House from testifying to Congress, „is the most prominent fact witness regarding obstruction of justice cited in the Mueller Report,” Dean said — as he himself was 46 years ago.

It sparked an angry attack from Trump, who has struggled in vain to put the Mueller probe behind him.

On Twitter he called Dean a „sleazebag attorney” in a Democratic effort to „redo” the probe.

„Can’t believe they are bringing in John Dean, the disgraced Nixon White House Counsel who is a paid CNN contributor. No Collusion – No Obstruction! Democrats just want a do-over which they’ll never get!” Trump tweeted.

Trump told journalists separately that Dean has „been a loser for many years.”

Asked if he thought he could be forced to step down like Nixon, Trump replied: „I don’t leave.”

„You can’t impeach somebody when there’s never been a thing done wrong,” he added.

Dean was the top lawyer for the Nixon’s White House in 1972 when the president sought his help to cover up his staff’s involvement in the break-in of Democratic offices at the Watergate complex.

Facing criminal prosecution, Dean turned against Nixon, laying out his own work with the president to hide their ties to Watergate.

He was sentenced to one to four years in prison, but was freed after four months, during which he gave evidence against other key Watergate conspirators.

In recent years he has been a commentator on politics for CNN.

Republicans on the committee accused Democrats of putting on the hearing — which included three other witnesses — for show, as none of those testifying had any direct knowledge of the Mueller investigation or Trump’s actions.

Representative Matt Gaetz accused Dean of making a career out of his Watergate history.

„Mr Dean has made a cottage industry out of accusing presidents of acting like Richard Nixon,” he said.

Calling the hearing a „frivolous exercise of going after the president,” he challenged Democrats: „You guys need to get your act together and figure out if you are going to open an impeachment inquiry or not.”

This photo released by the official website of the Iranian Defense Ministry on Sunday, June 9, 2019, shows the Khordad 15, a new surface-to-air missile battery at an undisclosed location in Iran. The system uses locally made missiles that resemble the HAWK missiles that the U.S. once sold to the shah and later delivered to the Islamic Republic in the 1980s Iran-Contra scandal. (Iranian Defense Ministry via AP)

TEHRAN, Iran (AP) — The Latest on tensions between Iran and the U.S. and developments in the Persian Gulf region (all times local):

Iran’s President Hassan Rouhani has met with Germany’s top diplomat amid heightened tensions over the country’s unravelling nuclear accord with world powers.

Maas’s visit to Tehran is part of European efforts to save the historic 2015 nuclear deal with Iran, and ease heightened tensions with the United States.

The U.S. pulled out of the deal over a year ago, and recently has imposed heavy new sanctions on Iran. In May, Tehran said it would begin enriching uranium closer to weapons grade if Europe didn’t come up with new terms for the deal by July 7.

The tensions between the long-time rivals recently soared when the U.S. deployed an aircraft carrier and B-52 bombers to the Persian Gulf.

Iran’s foreign minister has again threatened the United States over what he describes as an „economic war” launched by Washington against Tehran.

Mohammad Javad Zarif said on Monday that the U.S. „cannot expect to stay safe” after launching its economic war.

He directly blamed President Donald Trump for the ongoing tensions between Washington and Tehran.

Zarif said: „Mr. Trump himself has announced that the U.S. has launched an economic war against Iran. The only solution for reducing tensions in this region is stopping that economic war.”

Zarif’s comments came during a news conference with visiting German Foreign Minister Heiko Maas, who had traveled to Tehran in an effort to ease tensions.

Iran’s foreign minister is warning amid tensions between Washington and Tehran that „whoever starts a war with us will not be the one who finishes it.”

Maas is in Tehran in an effort to salvage Iran’s 2015 nuclear deal with world powers. Germany is a signatory to the accord.

Zarif came out to a news conference in Tehran grim-faced after a long private discussion with Maas, who on Sunday called Iran’s ballistic missile program problematic.

The U.S. pulled out of Iran’s nuclear deal over a year ago. That’s the root of the current tensions with Iran. In May, Tehran said it would begin enriching uranium closer to weapons grade if Europe didn’t come up with new terms for the deal by July 7.

Iran’s Foreign Ministry says nothing else but the country’s landmark 2015 nuclear deal with world powers will be discussed during high-stakes diplomacy meetings in Tehran this week.

Iranian state television quotes spokesman, Abbas Mousavi, as saying that visiting „European officials are not in a position to comment on Iran’s issues beyond the nuclear deal.”

Maas is now in Iran amid heightened tensions between Washington and Tehran. The tensions recently soared over America deploying an aircraft carrier and B-52 bombers to the Persian Gulf over a still-unexplained threat it perceives from Tehran.

After Maas, Japanese Prime Minister Shinzo Abe will arrive on Wednesday in Iran. 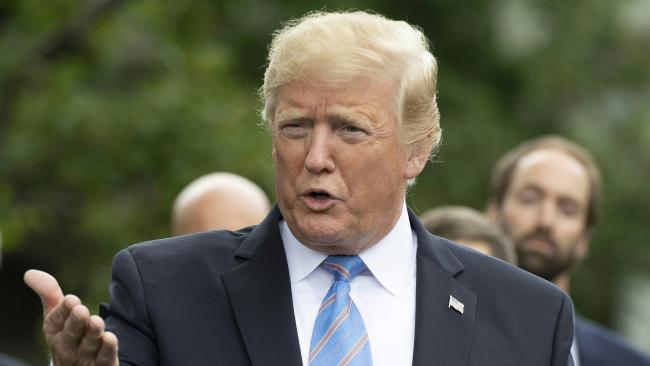 Beijing is preparing its people for hardship and explaining the necessity of a protracted national struggle against Washington.

This is No Way to Win a Trade War with China

There is little dispute that China engages in unfair and often predatory practices to protect and promote its domestic industries. Yet if the Trump administration’s diagnosis of U.S.-China economic relations is correct, its remedy has been roundly rejected. Most observers believe the U.S. resort to unilateral tariffs will fail to achieve its intended objectives and will harm the U.S. economy as much as China’s. Furthermore, this episode may have the negative long-term effect of strengthening China’s confidence that it will prevail in future bilateral tests of will.

In public discussion of the U.S.-China trade relationship, President Donald Trump has focused on China’s huge surplus in bilateral trade—$419 billion in 2018—as proof the Chinese are “cheating” and “raping” the U.S. economy. Many economists have criticized Trump for an overly simplistic if not erroneous fixation on the trade balance as the key issue in bilateral economic relations. Senior Trump advisors, such as U.S. Trade Representative Robert Lighthizer, have instead emphasized a broader goal of getting China to address structural problems such as protectionism against foreign-service industries, state subsidization of much of the Chinese economy, state-sponsored industrial espionage and acquiescence to intellectual property theft, and forced technology transfer as the price foreigners must pay to do business in China. This approach enjoys support from businesses in the United States and elsewhere that want to break into the Chinese market.