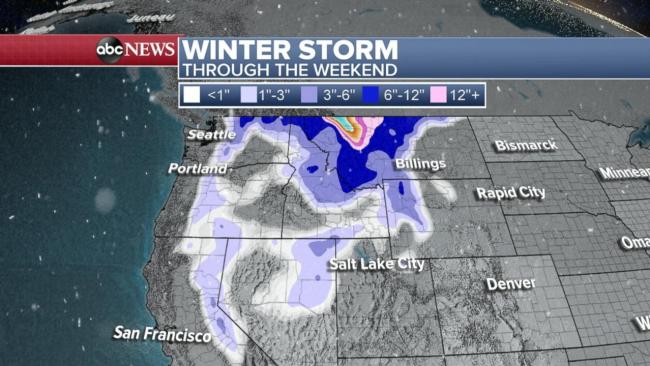 A major winter storm will hit the Northern Rockies this weekend, dumping more than four feet of snow with wind gusts up to 60 mph.

On Friday there were nearly 70 reports of severe weather from Kansas to Indiana, including more than 50 reports of damaging winds. Wind gusts of 70 mph were reported in Peoria, Illinois, along with tennis-ball-size hail up to 2.5″ in diameter.

Strong winds from thunderstorms blew over tents at a Manteno, Illinois, Oktoberfest event, but there were no injuries reported. ABC’s Chicago station reported that four people had to be rescued from Lake Michigan in Chicago during the storms Friday night.

Flooding was reported in and around Peoria, Illinois, and more than six inches of rain is estimated to have fallen in northwest Indiana, where flooding is being reported this morning.

Thunderstorms have been firing along a frontal boundary that is moving through parts of the Midwest this morning. Storms will settle down through the morning hours, and attention immediately turns to a major winter storm developing in the Northern Rockies. There are winter storm watches and warnings as well as winter weather advisories for parts of the region through the weekend.

A low pressure system will deepen in the Rockies today and begin to drag cold air from Canada into the western U.S.

Snow will begin to expand in coverage across Montana and northern Idaho this morning and afternoon. Out ahead of the low pressure, some severe storms could develop in Kansas and western Missouri, where strong winds and large yet brief tornadoes will be possible.

The low pressure will deepen Saturday evening and early Sunday with heavy snow spreading across the Northern Rockies and parts of the High Plains — especially in the state of Montana. Winds could gust as high as 60 mph in parts of Montana today, which could cause tree and power line damage. Wind gusts of this strength could last the entire weekend.

Meanwhile, some strong storms, with lightning, heavy rain and gusty winds will be possible across parts of the Midwest on Sunday, where 1-2 inches of additional rainfall is possible.

More than four feet of snow will be possible through the end of the weekend in the highest elevations of Montana. However, a widespread 6-12 inches is possible across much of the northern and central parts of the state.

The National Weather Service says this heavy snow over Montana could potentially be a historic winter storm. Travel will be very dangerous across parts of the state due to the heavy snow and winds.

Lastly, cold air behind the storm will help bring some snow to the mountain passes from Washington to California, which could cause some travel delays and reduced visibility. Up to a foot of snow is possible in the Sierra Nevada’s highest peaks. This could be potentially

On Thursday, Hurricane Lorenzo became the largest and most powerful hurricane to make it so far east in the Atlantic. The storm’s quick growth was unusual for hurricanes in the Atlantic, which usually gain intensity further west.

Two weeks ago, six named storms were active at once in the Atlantic and Pacific, hitting a record first set in 1992, forecasters reported. The onslaught threw the National Hurricane Center into high gear.

„All four workstations in the NHC Operations Area are in full use this morning,” the center said in a Tweet.

All four workstations in the NHC Operations Area are in full use this morning as NHC hurricane specialists prepare forecasts on current & developing systems over the Atlantic & eastern North Pacific basins. @NWS @NHC_Atlantic @NHC_Pacific http://www.hurricanes.gov

139 people are talking about this

And earlier this month, Hurricane Dorian — the strongest recorded storm to ever strike the Bahamas — tied for the strongest hurricane ever observed in the open Atlantic, according to NHC estimates.

As for the overall number of storms, though, NOAA did not expect 2019 to be a record-setting year. So far, the Atlantic basin has survived 12 named storms and five hurricanes. The northeast Pacific, which has had a pretty quiet season, has seen 13 named storms.

But conditions are ripe for an „above-average” end to the season, said Phil Klotzbach, a research scientist at Colorado State University.

„We still have October and November to go, so it remains to be seen exactly how much above-average the season will end up being,” he said.

dangerous for those traveling in the mountains this weekend. 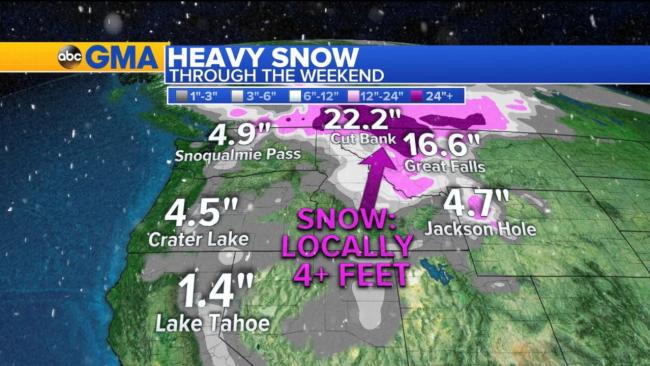 Winter storm could bring up to 50 inches of snow to parts of western US originally appeared on abcnews.go.com

Damaging winds and large hail are expected to sweep parts of the Midwest Friday, with cities from Wichita, Kansas, to Chicago, Illinois, in the storm system’s path.

Heavy rain and thunderstorms were moving through Illinois Friday afternoon, with another round of severe weather likely to begin overnight. Flash flooding is also possible.

Meanwhile, winter storm watches and warnings have been issued for Idaho, Montana and Washington state.

A winter storm will be especially severe for parts of Western Montana, where some areas could see up to 50 inches of snow.

The National Weather Service says this snowstorm could be compared to the one in September 1934.

The storm could create whiteout conditions and very dangerous travel.

In addition to heavy snow, winds are expected to gust near 50 mph, which will create near-zero visibility and blizzard-like conditions.

Cold temperatures and wind chills are also expected Sunday in the Northern Rockies and the Pacific Northwest.

In the Tropical Atlantic, there are still two tropical cyclones: Lorenzo, a Category 4 hurricane with winds of 145 mph, and Karen, with winds of 40 mph.

Karen is expected to dissipate and not pose any threat to the U.S. or any landmass.

On Thursday, monsoon storms dropped as much as 2 to 3 inches of rain in a short period of time, creating flash flooding in parts of Southern California and Arizona.

Some roads even had to shut down due to the water rushing over them; however, the monsoon storms were mostly over as of Friday.