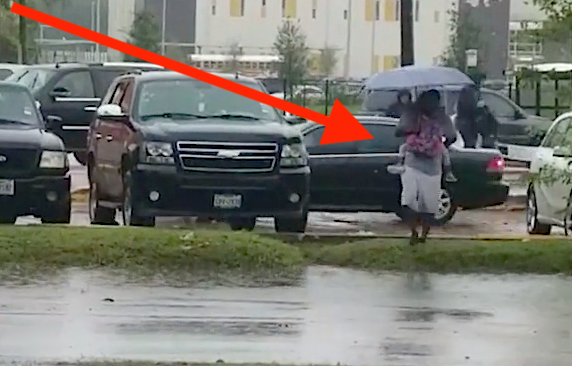 This person doesn’t know what lies beneath this flooded parking lot As Imelda inundated Texas with feet of rain in mid-September, a few people found out the hard way that seemingly harmless puddles could be more than they appear.One parking lot, in particular, was flooded by what looked to be just a few inches of water. However, a few people found themselves stepping into a well of water several feet deep.A person in the area decided to videotape unsuspecting pedestrians as they walked directly into the pool of neck-deep water.The first person shown in the video above, who is carrying a child, appears to take one step into the water before becoming completely submerged with only an umbrella staying above the water’s surface.Luckily, those that fell into the deep water appeared to be alright, albeit completely soaked.   On Sept. 19, the date that the video was recorded, Houston measured 9.21 inches of rain as Imelda unloaded heavy rain across the region. This is more than double the typical monthly rainfall in the city for September, which is 4.12 inches.The phrase „turn around, don’t drown” has become well-known in recent years to warn drivers not to drive through a flooded road, originating in the early 2000s by a warning coordination meteorologist in the National Weather Service. The same can be said for cases like this where people attempt to walk through floodwaters.Not only is it difficult to judge how deep the water is, but also what is in the water. In some cases, flooding can lead to open water being contaminated by sewage or other waste.Minimizing contact with dirty water is one of many things people should do when flooding strikes.

The ‘surprise’ storm that was no surprise

The snowstorm that hit the northern Rockies this weekend was many things. Historic. Unusual. Early in the season.What it wasn’t, however, was „surprising” to AccuWeather audiences and media partners. While national and local outlets relied on this term to describe the unprecedented storm, users of the popular AccuWeather app and AccuWeather.com site were warned four or more days out before the snow started falling Saturday in the northern Rockies and northwestern Montana.”This is the type of setup where it will snow not only in the mountains but also down to the valley floors and away from the foothills,” AccuWeather Senior Meteorologist Brett Anderson said the Tuesday before the storm when he accurately forecast the snowfall and the impact it would have. „There will be heavy accumulation on the roads over the passes with this storm.”

Winter typically comes early to the Rockies and Canada Prairies and that will continue to be the case later this week as a potent storm unleashes the first significant snowfall of the season. http://ow.ly/ewzI50woLn9

Major snowstorm to deal northern US an early taste of winter

Parts of Big Sky Country could become ‘big snow country’ this weekend as a major winterlike storm is poised to dump 1-2 feet of snow and bring record-challenging cold air.

The storm unloaded up to 3-4 feet of snow in spots, caused blizzard conditions and set several new daily snowfall records across Montana. The highest snowfall amount was 52 inches in Babb, Montana, while Browning was blanketed with 48 inches.

„Days ahead of the upcoming setup for a heavy snowstorm, AccuWeather began warning of the potential both nationally and in local forecasts,” said Marshall Moss, AccuWeather vice president, Forecasting and Graphic Operations. „Our impact-driven details and actionable forecasts gave people plenty of advanced notice of the dangerous, potentially life-threatening weather event to come.”

Those following along on the AccuWeather app saw it coming days in advance. For those who don’t have the AccuWeather app installed on an iOS and Android device, click here to download it. It’s completely free and delivers hyperlocal weather forecasts and warnings anywhere a user is in the world at a given time.

„Our AccuWeather team uses all of our extensive historical database, present data, artificial intelligence, analogs, the world’s largest collection of forecasting models and, importantly, more than 100 of the world’s best meteorologists to deliver the most reliable forecasts,” said AccuWeather Founder and CEO Dr. Joel N. Myers.

Recent AccuWeather forecasts warning of the Montana snowstorm, the extensive flooding caused by Hurricane Imelda, and Lorenzo’s damaging winds and heavy rain expected to hit the British Isles and northern Europe at the end of this week demonstrate AccuWeather’s superior accuracy.