Adriana Navarro,AccuWeather•October 6, 2019 President Donald Trump declared a major disaster on Oct. 4 for the State of North Carolina, nearly a month after Hurricane Dorian slammed against the state’s coastline.After touring the damage of Ocracoke, North Carolina, Gov. Roy Cooper requested on Sept. 13 that Trump make the declaration. On Sept 21, Cooper followed the letter up with a request for federal individual assistance.Earlier last week, Ocracoke Island resident Kelley Shinn wrote an Op-Ed for The New York Times, which described how the community was trying to piece itself back together after the hurricane made landfall. The island had been isolated from the mainland after Dorian had destroyed parts of Highway 12 and the rising water levels inundated the community.Representatives from Sen. Thom Tillis’s office had assured her on Sept. 13 that „the senator urged the president to sign (the request) that day,” Shinn wrote.

One week passed after the request had been made.Within that week, the post office was reopened, but several other establishments remained closed, such as the library and bank, according to Shinn.Two weeks passed after the request had been made.Within this second week, newly sworn-in U.S. Rep. Greg Murphy, a Republican from North Carolina, and North Carolina Republican Sen. Bob Steinburg mistakenly announced that the president had signed the request to declare a major disaster declaration, according to Shinn.These claims were made on the same day Cooper sent the second request to Trump, asking for him to designate individual assistance for four counties, including Hyde County where Ocracoke is located.Cooper visited the island to clarify in person that the papers had not yet been signed and to listen to the stories of islanders’ experiences with Dorian.The island’s only school announced its reopening within the second week. The island continued to receive aid from good Samaritans bringing supplies to the island via boats.Three weeks to the day, on Oct. 4, Trump posted a tweet.

AccuWeather•October 6, 2019 The Decker Fire burns two miles south of Salida, Colorado, in the Sangre de Cristo Wilderness, according to InciWeb, and rages just a quarter of a mile away from the nearest homes, Chaffee County Sheriff John Spezze told 9NEWS on Saturday afternoon.”Today is pivotal,” Spezze said during a public meeting on Saturday morning, discussing the efforts to fight back the flames due to the gusty winds forecast for the area.

„Continued gusty winds and very dry conditions will persist today and tomorrow,” AccuWeather Meteorologist Brett Rossio said. „This will only exacerbate the Decker Fire situation. Dry conditions are likely to continue through at least midweek, so relief is not expected in the near-term.”

The fire has grown to 5,921 acres and is only 5% contained with 730 personnel involved as of Oct. 5, according to the Incident Information reports.

Sparked by lighting on Sept. 8, the Decker Fire had grown significantly over the past few days amid gusty winds and dry weather conditions.

The flames have encroached close enough to homes claimed at least two buildings, according to public officials on Saturday.

The first structure was a cabin on private land surrounded by forest in Fremont County. The second was outside of the evacuation area in Chaffee County, according to the Chaffee County Sheriff’s Office.

Evacuations have not yet been ordered for Salida, officials said Saturday morning during a public meeting. However, 300 people and 130 houses have been evacuated as with five subdivisions included in the mandatory evacuation zone, according to KDVR.

Tourists were evacuated from hotels in Acapulco, Mexico, on Saturday after a 4.9-magnitude earthquake shook the region. 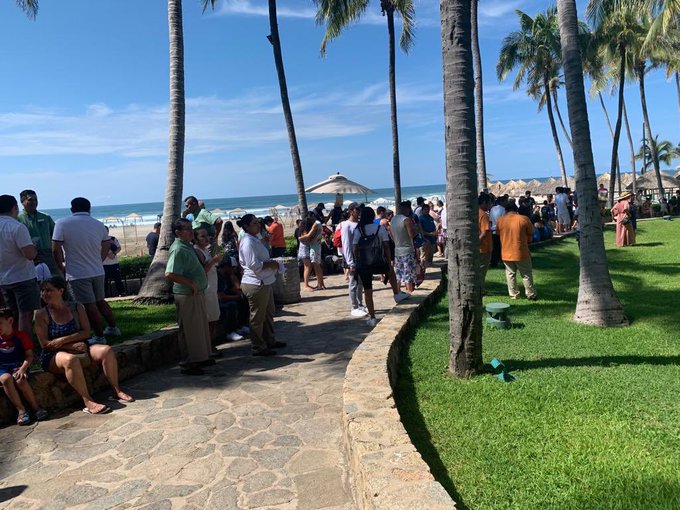 There were no immediate reports of injuries or damage following the quake.

Earlier on Saturday, a 3.5-magnitude earthquake struck off of the coast of San Francisco, California.

The U.S. Geological Survey reported the quake was 3.7 miles away from Colma, California, and 9.9 miles southwest of San Francisco.

After a long and scorching summer, the arrival of autumn couldn’t come soon enough. Unfortunately, Mother Nature’s behavior hasn’t exactly lined up with the calendar.

All of our leaf-peeping and flannel-wearing fantasies were put on hold when AccuWeather’s annual fall forecast— which called for warm weather and hurricanes— turned out to be spot-on. Above-normal temperatures held strong across the Northeast and mid-Atlantic regions of the United States throughout September, making for a very summery start to autumn.

Luckily, October has arrived—and it’s going to deliver the sweater weather we’ve been waiting for.

According to meteorologists, a „significant change” in the weather pattern is headed towards the Northeastern parts of the country, beginning in the first week of October. In recent weeks, the region has experienced temperatures averaging from 2 to 6 degrees above normal with a few cooler days mixed in. The upcoming shift will result in chillier air and a noticeable cooldown.

„Much of the region is forecast to experience the lowest temperatures of the season so far with the likelihood of widespread frost over the interior during the first weekend of October,” said Paul Pastelok, AccuWeather’s top long-range forecaster.

While it’s difficult to pinpoint how extensive a frost might be, it’s most likely to happen over the central Appalachians and the majority of central and northern New England next weekend. This influx of freezing air is more than a signal to unpack your sweaters and scarves; it could also do away with bothersome allergens and warm-weather pests (we’re looking at you, mosquitoes).

Soaking rainfall will spread through the northeastern United States as the new week begins, which will help to ease the unusually dry conditions that have expanded in recent weeks.

While the weekend will start on a nice note after a frosty Saturday morning, clouds and showers are forecast to move in on Sunday as a storm approaches from the west.

„Locally heavy rainfall is expected along this storm from Sunday night through Monday night from the Ohio and Tennessee valleys through the interior Northeast,” AccuWeather Meteorologist Tyler Roys said.

The steadiest rain will hold off until later Monday along the Northeast’s Interstate-95 corridor.

Conditions ranging from abnormally dry to severe drought are occurring across 51 percent of the Northeastern states, according to the latest outlook issued by the U.S. Drought Monitor. At the start of July, zero percent of the region was enduring such conditions.

Rainfall can average 1-2 inches during the upcoming storm, according to Roys.

While this rain will help to water the dry ground and fill up low creeks and streams, it can also create slowdowns for motorists on the roadways. This includes stretches of interstates 70, 80, 81, 90 and 95.

Where leaves have fallen onto secondary roadways, the pavement can become extra slippery during the wet weather, creating a greater hazard for motorists.

Delays can occur as the wet weather passes over the major airport hubs.

Stay up-to-date on when rain could impact your travel plans by downloading the free AccuWeather app.

Flash flooding concerns will be low for this event given the prior dry conditions. Still, pooling of water can occur in low-lying and poor drainage areas.

A brief surge of warmth will precede the wet weather in areas closer to the coast, but highs will fall well short of the record levels that were achieved at the start of October.

Beyond Monday night, AccuWeather meteorologists are monitoring the potential for a new storm to develop and stall for a time off the Northeast coast, leading to an extended period of cloudy, rainy weather.

Only if a strong push of dry air follows the initial storm would the region experience the return of an extended dry stretch during the middle and latter half of next week.

Cows seen on farmland left arid by a lack of rainwater in Colina, north of Santiago, Chile

Cows seen on farmland left arid by a lack of rainwater in Colina, north of Santiago, Chile (AFP Photo/MARTIN BERNETTI)

Petorca (Chile) (AFP) – For Erick Hurtado, the worst thing about the drought that has devastated his family farm in Chile is the dead animals.

„Going out and seeing the animals dead on the ground is so horrible,” Hurtado says as he gazes across the dusty paddocks of his farm in Petorca, near the coastal city of Valparaiso.

Farmers are counting the cost of one of the driest austral winters in six decades, which has destroyed crops and left tens of thousands of farm animals dead in the fields of central Chile.

Hurtado’s farm, owned by his grandfather, has lost half its 60 head of cattle.

So far, 106,000 animals have died due to lack of water and fodder, mostly goats, cattle and sheep, according to the agriculture ministry.

President Sebastian Pinera, who last month announced a $5 billion plan to improve water distribution, this week set up a crisis group of government agencies to tackle the water crisis, which he said had become „more extensive and more intense.”

In Colina, north of the capital Santiago, the drought has been hard on small farmers. Scrawny cattle pick at sprigs of strawy grass on pastures that have turned to dust. Cows, goats and horses roam hungry on hills have turned to a dry muddy brown.

„The drought has been disastrous for us,” said Sandra Aguilar. Her family owned about a hundred head of cattle. Today, only half survive thanks to a trickle of water provided by a neighbor who still has some reserves.

„The situation is complicated,” said Javier Maldonado, governor of the province of Chacabuco, where several agricultural areas have been hit particularly hard by the drought.

„We have to be realistic, climate change is here to stay,” he said.

Dominga Mondaca points out the deep fissures that run through the garden behind her house in the village of La Ligua near Valparaiso. The garden used to be full of strawberries and citrus trees; now it’s cracked earth.

„We have had many years with little water. But the last year, it didn’t rain at all,” said the 73-year-old, one of more than 600,000 people the government is supplying by tanker trucks as part of emergency measures.