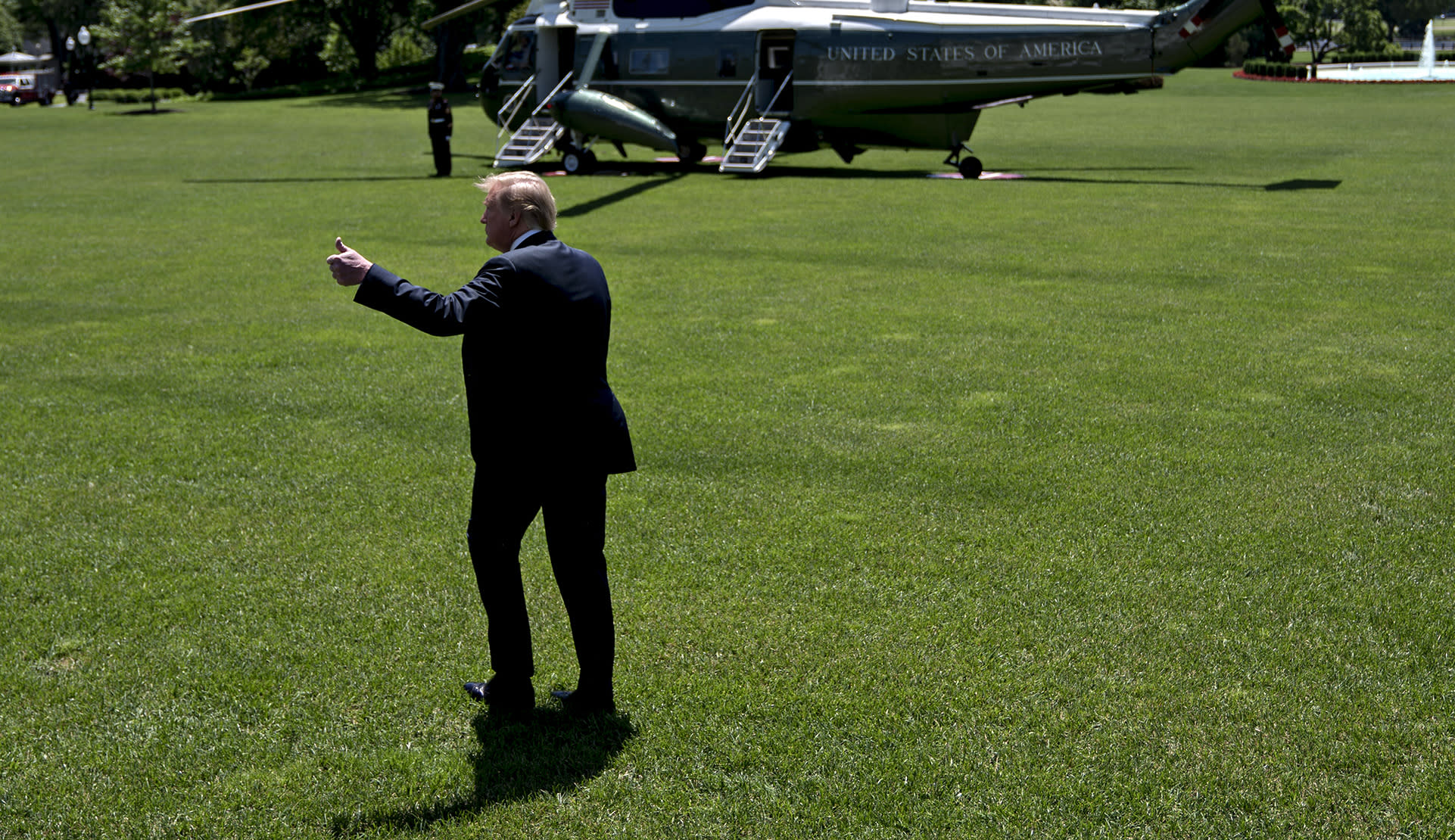 Trump Touts U.S.-China Phase One Trade Deal, Delays Tariffs(Bloomberg) — Terms of Trade is a daily newsletter that untangles a world embroiled in trade wars. Sign up here. The U.S. and China agreed on the outlines of a partial trade accord Friday that President Donald Trump said he and his counterpart Xi Jinping could sign as soon as next month.As part of the deal, China would significantly step up purchases of U.S. agricultural commodities, agree to certain intellectual-property measures and concessions related to financial services and currency, Trump said Friday at the White House. In exchange, the U.S. will delay a tariff increase due next week as the deal is finalized, though new levies scheduled for December haven’t yet been called off.The agreement marks the largest breakthrough in the 18-month trade war that has hurt the economies of both nations. Importantly, Trump said the deal was the first phase of a broader agreement. The president indicated he could sign a deal with Xi at an upcoming November summit in Chile.While the limited agreement may resolve some short-term issues, several of the thorniest disputes remain outstanding. U.S. goals in the trade war center around accusations of intellectual-property theft, forced technology transfer and complaints about Chinese industrial subsidies.Xi told Trump in a letter — which the White House distributed on Friday — that it’s important the countries work together to address each others’ concerns. “I hope the two sides will act in the principle and direction you and I have agreed to, and work to advance China-U.S. relations based on coordination, cooperation and stability,” the letter said.Chinese state news agency Xinhua said negotiators made efforts toward a final agreement, but stopped short of calling Friday’s outcome a deal. The Editor-in-Chief of China’s most prominent state-run newspaper Global Times, Hu Xijin, noted on Twitter that official reports from China didn’t mention Trump’s goal of signing the deal next month, which indicates Beijing wants to keep expectations low.Phase Two

Sondland will defy State Department order not to testify in impeachment probe, lawyer says Dylan Stableford Senior Writer,Yahoo News•October 11, 2019  Sondland will defy order not to testify in impeachment probe, lawyer saysThree days after State Department officials, in a post-midnight phone call, ordered Gordon Sondland, a central player in the Ukraine controversy, not to testify in the House impeachment inquiry into President Trump, his lawyer said on Friday that he will appear before Congress next week.“Notwithstanding the State Department’s current direction to not testify, Ambassador Sondland will honor the Committees’ subpoena, and he looks forward to testifying next Thursday,” Robert Luskin, Sondland’s attorney, said in a statement.Sondland, the U.S. ambassador to the European Union, had been called to testify in private before three House committees on Tuesday, but the State Department directed him not to show up. Luskin told Yahoo News that Sondland got the order from a State Department official in a phone call at 12:30 a.m. on the morning he was scheduled to appear.House Intelligence Committee Chairman Adam Schiff blasted the Trump administration for blocking Sondland’s testimony, saying that Sondland had turned over to the State Department text messages or emails “deeply relevant” to the investigation, but that the department had refused to provide them to Congress.In his statement Friday, Luskin said that his client cannot turn over those documents under federal law.“The State Department has sole authority to produce such documents, and Ambassador Sondland hopes the materials will be shared with the Committees in advance of his Thursday testimony.”

President Trump and Gordon Sondland, the U.S. ambassador to the European Union, second from right, in 2018. (Pablo Martinez Monsivais/AP)The announcement came hours before Marie Yovanovitch, the former U.S. ambassador to Ukraine, was scheduled to testify before the same committees as part of the House impeachment probe. Yovanovitch was removed from her post, reportedly because she objected to the backchannel communications between Rudy Giuliani, Trump’s personal lawyer, and the government of Ukraine.Sondland, a businessman and investor whose companies donated at least $1 million to Trump’s inauguration, was appointed by Trump in May 2018. Ukraine is not part of the European Union, but he has said he took on special assignments from Trump outside his nominal duties.In text messages released last week, Sondland was party to key exchanges on whether the White House was withholding a military aid package for Ukraine as part of a “quid pro quo” in exchange for a Ukrainian investigation into former Vice President Joe Biden and his son Hunter.“As I said on the phone, I think it’s crazy to withhold security assistance for help with a political campaign,” Bill Taylor, the top U.S. diplomat in Ukraine, wrote in a text message to Sondland at 12:47 a.m. on Sept. 9.Some hours later, during which Sondland reportedly consulted with Trump, he replied: “Bill, I believe you are incorrect about President Trump’s intensions. The President has been crystal clear no quid pro quo’s of any kind. The President is trying to evaluate whether Ukraine is truly going to adopt the transparency and reforms that President Zelensky promised during his campaign.”

He then added: “I suggest we stop the back and forth by text.”

Jaguars owner Shad Khan on NBA in China: ‘You have to respect the norms’

Yahoo Finance•October 10, 2019NFL owner Shad Khan: ‘You have to respect the norms’ on China-NBA Jacksonville Jaguars owner Shad Khan says that all Americans have the right to speak out on social causes in America. But he is not so sure that applies to American sports executives commenting on political issues in other countries.Khan was asked on stage at the Yahoo Finance All Markets Summit in New York on Thursday what the NBA should do about its current political crisis in China, after Houston Rockets G.M. Daryl Morey tweeted in support of the Hong Kong protesters, angering the NBA’s business partners in China.“As an American investor/owner, I went through something very similar in Catalan, Spain,” Khan said, referencing the Catalan independence movement that reached a boiling point in 2017. “And I didn’t think, as an American, I should really be having an opinion on it, even though a lot of people wanted us to. I want to have an opinion in America, there’s a civic duty to engage and do the right thing, but having an opinion on sovereign matters in other countries, it’s for those people to decide.” (Flex-N-Gate has seven plants in Spain, four of them in Catalonia.)Applying his point specifically to China, Khan made his view more clear: “I have a factory in China,” he said. “And there are thousands of other people who have factories and operations in China, and they do very well. But you have to respect the norms.”Khan used the same general point to discuss the Colin Kaepernick-led player protests in the NFL from two years ago.“I think players, and every human being, has a right to speak what their opinion is,” he said. “There’s no issue as far as that goes, whether it’s NFL or anybody else. We are American citizens, we have a social, civic responsibility to be active in causes we believe in. But do we have that same responsibility to opine on sovereign matters in other countries? That’s the critical issue.”

Khan, who also owns the English soccer team Fulham F.C., added that his company Flex-N-Gate tries to avoid fraught political issues. And the NFL, it is no secret, seeks to do the same.

“Whether you’re a sports team or you’re an auto parts factory, a key tenet of why you exist is to do good,” Khan said. “And we are active, obviously, in every market we are in, but looking, really, for areas that are non-controversial or non-divisive. So what does that mean? For a football club like the Jaguars in London, or Fulham, we focus on youth health, for example, youth education, and programs for the less fortunate… non-controversial, where everybody really supports those initiatives. That’s been our approach.”