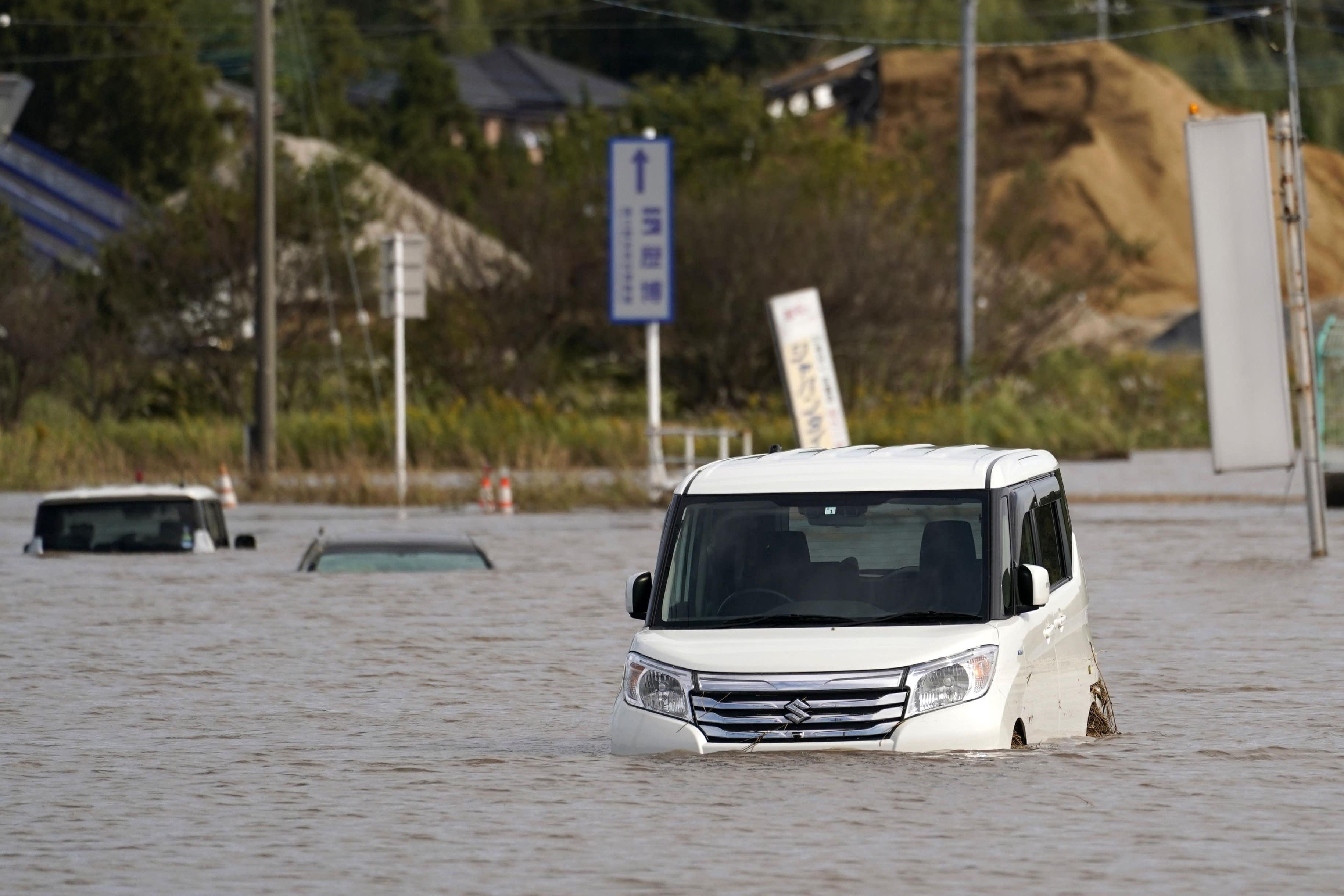 Japan Flooding Vehicles are submerged in floodwaters after torrential rain in Sakura city, Chiba prefecture, east of Tokyo, Saturday, Oct. 26, 2019. Torrential rain that caused flooding and mudslides in towns east of Tokyo added damage in areas still recovering from recent typhoons. (Kyodo News via AP)TOKYO (AP) — Torrential rain that caused flooding and mudslides in towns east of Tokyo left at least 10 people dead and added fresh damage in areas still recovering from recent typhoons, officials said Saturday.Rescue workers found the body of a person who had gone missing in Chiba prefecture after getting caught up in floodwaters while driving. Another person was unaccounted for in Fukushima, farther north, which is still reeling from damage by Typhoon Hagibis earlier this month.The death toll from the flooding included nine people in Chiba and one in Fukushima.While rains and floodwaters subsided, parts of Chiba were still inundated. About 4,700 homes were out of running water and some train services were delayed or suspended.In Midori district in Chiba, mudslides crushed three houses, killing three people who were buried underneath them. Another mudslide hit a house in nearby Ichihara city, killing a woman. In Nagara and Chonan towns, four people drowned when their vehicles were submerged.”There was enormous noise and impact, ‘boom’ like an earthquake, so I went outside. Then look what happened. I was terrified,” said a Midori resident who lives near a crushed home. „Rain was even more intense than the typhoons.”In Fukushima, a woman was found dead in a park in Soma city after a report that a car was washed away. A passenger was still missing.Rain also washed out Friday’s second round of the PGA Tour’s first tournament held in Japan, the Zozo Championship in Inzai city. Saturday’s second round allowed no spectators.Prime Minister Shinzo Abe held an emergency task force meeting Saturday morning and called for „the utmost effort in rescue and relief operations.” He also urged quicks repairs of electricity, water and other essential services to help restore the lives of the disaster-hit residents.The Prime Minister’s Office said the average rainfall for the entire month had fallen in just half a day Friday.The downpour came from a low-pressure system above Japan’s main island of Honshu that moved northward later Friday. Power was restored Saturday at most of the 6,000 Chiba households that had lost electricity. About 390 people remained at shelters Saturday afternoon.Two weeks ago, Typhoon Hagibis caused widespread flooding and left more than 80 people dead or presumed dead across Japan. An earlier typhoon in September had devastated Chiba, where more than 50,000 homes were damaged or destroyed, and 100 others flooded. Friday’s downpour flooded more than 150 homes and damaged several others.Yoshiki Takeuchi, an office worker who lives in a riverside house in Chiba’s Sodegaura city, said he had just finished temporary repairs to his roof after tiles were blown off by the September typhoon when Friday’s rains hit hard.”I wasn’t ready for another disaster like this. I’ve had enough of this, and I need a break,” he told Kyodo News agency._Follow Mari Yamaguchi on Twitter at https://www.twitter.com/mariyamaguchi

Leyte Gulf: The Battle That Made the U.S. Navy the World’s Most Dominant The National Interest•October 27, 2019

The Battle of Leyte Gulf left the Imperial Japanese Navy (IJN) almost utterly broken. Three battleships were lost, including the super-battleship HIJMS Musashi. Four aircraft carriers had been sunk, along with some ten cruisers and eleven destroyers. Exact numbers of Japanese losses are difficult to come by, because the battle gave free rein to US submarines and aircraft carriers to wreak havoc across the region. For example, the battleship HIJMS Kongo was lost to submarine attack three weeks after the battle, while relocating from Brunei to Japan. The rest of the IJN would struggle to reconstitute itself in any useful manner for the duration of the war, with many vessels sunk by U.S. carrier raids against bases in Japan. The battle dramatically curtailed the ability of Japan to resist the final Allied campaigns of the war.The Kamikazes Leyte Gulf did reveal one final Japanese weapon, however. Although both American and Japanese pilots had made suicide attacks (generally under extreme conditions) earlier in the war, Leyte Gulf saw the first organized efforts to use suicide aircraft for tactical effect. Not long after narrowly escaping Admiral Kurita’s Center Force, the escort carriers of Taffy 3 came under concerted attack from a unit of Japanese suicide planes. Most of the carriers were damaged in the attacks, with St. Lo succumbing after a direct hit from an A6M Zero. Although the attacks could not turn the tide of the battle, they offered an ominous harbinger of what the rest of the war would look like. The Great What Ifs Leyte Gulf is characterized by its great “what ifs,” generated by the complexity of the Japanese plan and the confused nature of the U.S. response. Unfortunately for the Japanese, the huge disparities in resources between the U.S. Navy and the IJN meant that almost any scenario would have led to the near utter destruction of the fleet. What if Halsey had caught Kurita?