GOP wipeout feared as impeachment fever spills over into House and Senate races Andrew Romano West Coast Correspondent,Yahoo News•October 29, 2019 Welcome to 2020 Vision, the Yahoo News column covering the presidential race with one key takeaway every weekday and a wrap-up each weekend. Reminder: There are 97 days until the Iowa caucuses and 371 days until the 2020 election.

As the impeachment battle rages in Washington, Democrats’ position appears to be improving up and down the ballot.Projecting current trend lines — admittedly a risky undertaking — shows it’s entirely possible the party could win the presidency, the Senate and the House next November.Let’s start with impeachment itself. Before news of the Ukraine scandal began to snowball, only about 40 percent of Americans supported impeachment, according to FiveThirtyEight’s polling average; a majority opposed it. Today, those numbers have pretty much flipped, with nearly 49 percent in favor and about 43 percent opposed. Ask only how people feel about starting the impeachment process, meanwhile, and the gap widens; about 52 percent say yea versus about 42 percent who say nay. Particularly problematic for Trump is the increase in support for impeachment among independents, to 47.5 percent from 33.9 percent in late September. And the latest impeachment developments — the top Ukraine expert on the National Security Council plans to testify Tuesday about how troubling he found Trump’s Ukraine call, and Democrats are set to begin public hearings — are unlikely to help the president’s cause.In parallel with the shift in sentiment on impeachment, Trump’s approval rating has fallen from about 43 percent in late September to 40.6 percent today, while his disapproval rating has risen from 52.8 percent to 54.2 percent. These aren’t huge swings, but the president’s approval numbers rarely move much — Americans already know how they feel about the guy — so any movement tends to be significant. And a net approval rating of negative 13.6 percentage points heading into a reelection year is not good. For comparison, the only modern president in worse shape at this point in his presidency was Jimmy Carter; even Barack Obama, who faced similar polarization and a much worse economy, was performing about 8 points better in October 2011 than Trump is now. Carter lost reelection; Obama won.

At the same time, Trump is trailing by wide margins in national head-to-head matchups with each of the three leading Democratic presidential contenders. According to RealClearPolitics, Joe Biden currently leads the president by 6.7 percentage points, on average — 50.1 percent to 43.4 percent. Bernie Sanders now leads Trump by 6.5 points — 50 percent to 43.5 percent. And Elizabeth Warren leads Trump by 5.7 points — 49.7 percent to 44 percent. It’s especially significant that all three Democrats are at or near 50 percent.

A presidential contest, of course, is not waged nationwide but in key Electoral College swing states. But even there, Democrats are ahead. Recent polls from Wisconsin, Florida, Minnesota, Virginia, Ohio and North Carolina all show the same thing: The top Democrats are beating Trump where it matters most. In Minnesota, which Hillary Clinton won by only 1.5 points, a Star Tribune poll shows the president losing to the leading Democrats by 9 to 12 points. In Wisconsin, which Trump carried in 2016 by less than a point, a Marquette Law School poll shows Biden beating Trump by 6, with Sanders up by 2 and Warren ahead by 1. In Florida, a University of North Florida poll shows Trump stuck at 43 percent or 44 percent; he trails Biden by 5 and Warren by 3. Even in Iowa — a state Trump carried by 9 points in 2016 — an Emerson College poll shows Trump essentially tied with Biden, Sanders and Warren.

The congressional outlook is similarly gloomy for Republicans. On Monday, Rep. Greg Walden — the top Republican on the House Energy and Commerce Committee, and the only Republican in Oregon’s congressional delegation —shocked the party by announcing he would not run for reelection, making him the 19th GOP House member to retire. The problem for House Republicans isn’t lack of targets; Democrats are defending seats in roughly 30 districts that Trump won in 2016. Instead, the problem is Trump’s relative unpopularity.

According to the expert handicappers at the Cook Political Report, only 18 Democratic-held seats are currently considered toss-ups, and Republicans are defending six toss-ups of their own. Unless the president’s approval rating rises by next November — and unless Republican incumbents stop retiring — it will be difficult for the GOP to net the 21 seats it needs to regain control of the House. Democrats also have history on their side: They’ve gained House seats in five of the past six presidential cycles, and the House majority hasn’t flipped during a presidential cycle since 1952.

Until recently, the Senate seemed like a bright spot for Republicans; to preserve their majority, they simply need to prevent the Democrats from netting three seats (if Trump loses) or four seats (if he wins and a Republican vice president becomes the tiebreaker). According to Cook, only three GOP-held seats are even considered toss-ups (Cory Gardner in Colorado, Martha McSally in Arizona and Susan Collins in Maine), and Democrats are defending a toss-up of their own (Doug Jones in Alabama). That means to flip the Senate, Democrats would need to pitch the electoral equivalent of a perfect game.

The trouble for Republicans is that impeachment is making that more possible, not less. With the Democratic House almost certain to impeach Trump, a Senate trial is looming — and with it tough votes that force Gardner, McSally and Collins to either enrage the GOP base (by voting to convict) or alienate swing voters and motivate Democrats to turn out (by voting to acquit). Adding to the GOP’s headaches is the recent news that Democratic Senate challengers in Arizona, Maine and Iowa raised more money last quarter than the senators they’re running against; in Colorado, the polls show former Gov. John Hickenlooper leading Gardner by double-digit margins.

For these reasons, “a growing number of Republicans are privately warning of increasing fears of a total wipeout in 2020: House, Senate, and White House,” according to Axios. It’s hardly guaranteed that Democrats will sweep the GOP next November; a lot can change in a year. But if the election were held today, the data suggests Democrats could pull it off — and with D.C.’s impeachment drama likely to heat up in the weeks and months ahead, Republicans are probably right to be anxious.

At least one Republican, though, insists there’s nothing to worry about: Donald Trump, who Tuesday morning predicted that “the Do Nothing Dems will lose many seats in 2020.”

Nervous Nancy Pelosi is doing everything possible to destroy the Republican Party. Our Polls show that it is going to be just the opposite. The Do Nothing Dems will lose many seats in 2020. They have a Death Wish, led by a corrupt politician, Adam Schiff!

57.6K people are talking about this

Download the Yahoo News app to customize your experience.

Donald Trump on Monday outed a military working dog that tracked down the head of the Islamic State.

The US president tweeted a photo of a Belgian Malinois that he said worked with a team of special forces in the capture of Abu Bakr al-Baghdadi in a tunnel beneath a compound in northeastern Syria.

The name and other details about the dog remain a secret.

„We have declassified a picture of the wonderful dog (name not declassified) that did such a GREAT JOB in capturing and killing the Leader of ISIS, Abu Bakr al-Baghdadi!” the president tweeted.

Gen. Mark Milley, the chairman of the joint chiefs of staff, told reporters earlier on Monday that the animal „performed a tremendous service” in the Saturday night raid.

We have declassified a picture of the wonderful dog (name not declassified) that did such a GREAT JOB in capturing and killing the Leader of ISIS, Abu Bakr al-Baghdadi!

180K people are talking about this

Al-Baghdadi set off an explosion that killed himself and three children and apparently wounded the dog.

General Milley said the dog was „slightly wounded” but was now recovering and had returned to duty with its handler at an undisclosed location. He and Defence Secretary Mark Esper said the US was protecting the dog’s identify by keeping any information about the canine classified for now.”We are not releasing the name of the dog right now,” General Milley said. „The dog is still in theatre.”The US military commonly uses the Belgian Malinois to guide and protect troops, search out enemy forces and look for explosives. The breed is prized for its intelligence and ability to be aggressive on command, said Ron Aiello, president of the United States War Dogs Association.

„That’s the kind of dog you want to lead a patrol like this,” said Mr Aiello, a former Marine dog handler whose organisation helps active duty and retired military dogs. „They are the first line of defence. They go out front.”Not releasing the name makes sense as a security precaution for the same reason you wouldn’t identify the troops who take part in the raid, he said. „There could be retaliation.”A Belgian Malinois service dog named Cairo accompanied US Navy SEALs in the 2011 raid that killed Osama bin Laden, the leader of al-Qaeda, in Pakistan. President Barack Obama met the canine at a ceremony to honour the commandos.Mr Trump gave a dramatic account of the raid in Syria, variously saying there was one dog and multiple canines involved in the operation. He said that as US troops and their dogs closed in, the militant went „whimpering and crying and screaming all the way” to his death.”He reached the end of the tunnel, as our dogs chased him down,” Mr Trump said. 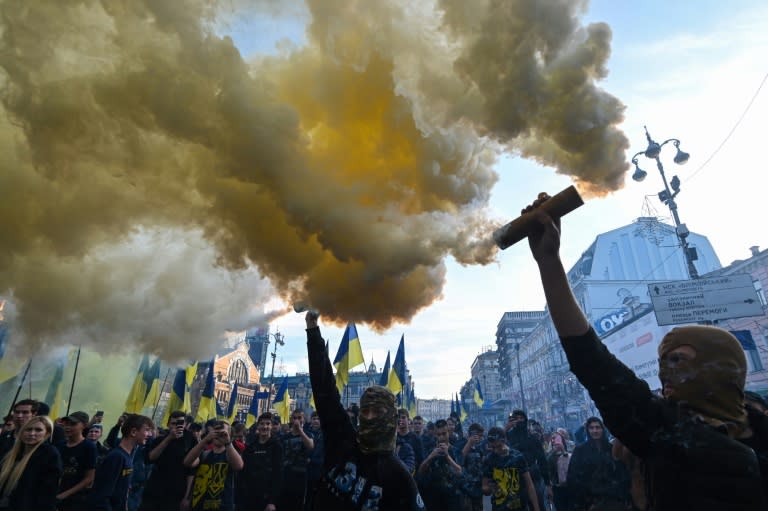 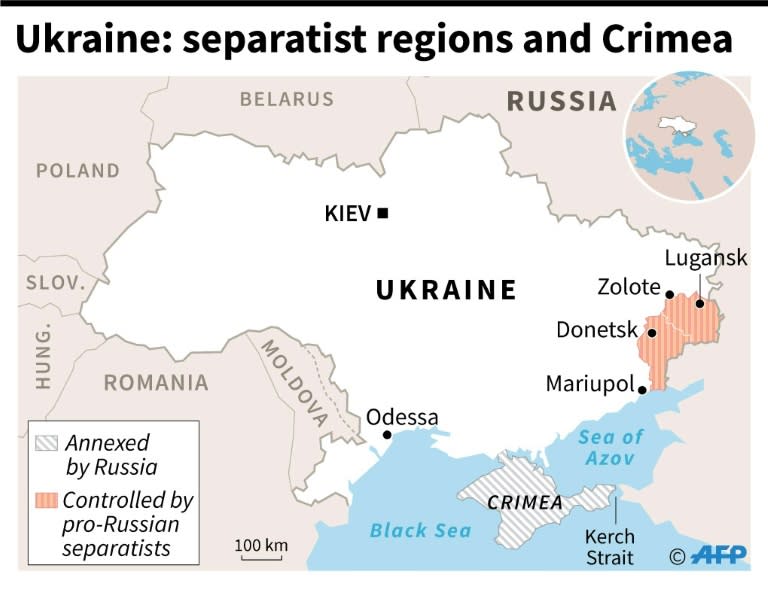 Ukrainian nationalists have staged a series of protests against President Volodymyr Zelensky’s peace process with Moscow-backed separatistsUkrainian nationalists have staged a series of protests against President Volodymyr Zelensky’s peace process with Moscow-backed separatists (AFP Photo/GENYA SAVILOV)Kiev (AFP) – The Ukrainian army and Moscow-backed separatists said Tuesday they had begun to withdraw their troops from a key area in the war-torn east ahead of a high-stakes summit with Russia.The long-awaited pullback is a precondition for the first face-to-face talks between Russian President Vladimir Putin and his Ukrainian counterpart Volodymyr Zelensky, to be mediated by the leaders of France and Germany.”The process of troop withdrawal began by both sides… in the area of Zolote-4″ in the Lugansk region, Ukraine’s army said on Facebook.Monitors from the Organisation for Security and Cooperation in Europe confirmed the move.”Today the sides have just resumed the withdrawal of troops and arms in Zolote,” Martin Sajdik, an OSCE special representative, told journalists.”I think that we did a lot to bring about the Normandy (summit),” Zelensky told the Interfax-Ukraine news agency, referring to the name given to the internationally-mediated talks.The rival forces also need to withdraw troops from the village of Petrivske in the Donetsk region for the summit to go ahead.- ‘Surrender’ -Since coming to power in May, comedian-turned-president Zelensky has sought to revive a peace process to end a five-year-old separatist conflict in eastern Ukraine that has claimed some 13,000 lives.But those efforts have stalled as Kiev’s forces and the separatists have repeatedly failed to pull back troops from the frontline because of exchanges of gunfire.Zelensky’s peace plan including the troop pullback has been strongly criticised by many in Kiev, especially war veterans and nationalists.Some 300 Ukrainians heeded the calls of veterans and nationalists to protest outside the presidential office against the withdrawal of troops, chanting: „No surrender!”.The same calls have been made over the past few weeks, as thousands of Ukrainians including Zelensky’s predecessor Petro Poroshenko have protested in the capital Kiev and other cities.Various nationalist organisations even deployed their own troops to Zolote in an effort to prevent a retreat of Ukrainian forces.