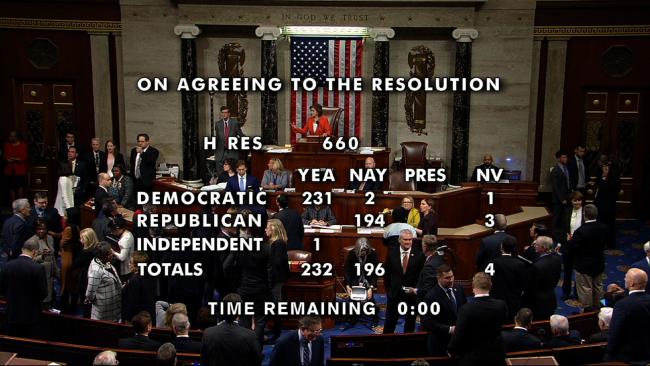 Scroll back up to restore default view.The House on Thursday passed a resolution to establish formal procedures for the ongoing impeachment inquiry into President Trump’s alleged political interference in foreign aid to Ukraine.The 232-196 vote fell almost exclusively along party lines, with former Republican and current independent Rep. Justin Amash voting yes, and two moderate Democrats voting no.The resolution calls for open hearings, addressing Republican criticism that the impeachment proceedings thus far have been conducted behind closed doors and signaling that the probe will soon enter a public phase.House Speaker Nancy Pelosi, who in September announced the opening of a formal impeachment inquiry, called Thursday’s vote a “solemn” occasion.“I doubt anybody in this place or anyone you know comes to Congress … to impeach the president of the United States,” Pelosi said, adding: “Unless his actions are jeopardizing our honoring our oath of office.”“The evidence we have already collected paints the picture of a President who abused his power by using multiple levers of government to press a foreign country to interfere in the 2020 election,” House Democrats leading the probe said in a statement. “The next phase will move from closed depositions to open hearings where the American people will learn firsthand about the President’s misconduct.”Following the vote, the White House released a statement blasting Democrats and the impeachment inquiry.“The President has done nothing wrong, and the Democrats know it,” read the statement attributed to White House press secretary Stephanie Grisham. “Nancy Pelosi and the Democrats’ unhinged obsession with this illegitimate impeachment proceeding does not hurt President Trump; it hurts the American people.”“The Democrats want to render a verdict without giving the Administration a chance to mount a defense,” Grisham added. “That is unfair, unconstitutional, and fundamentally un-American.”