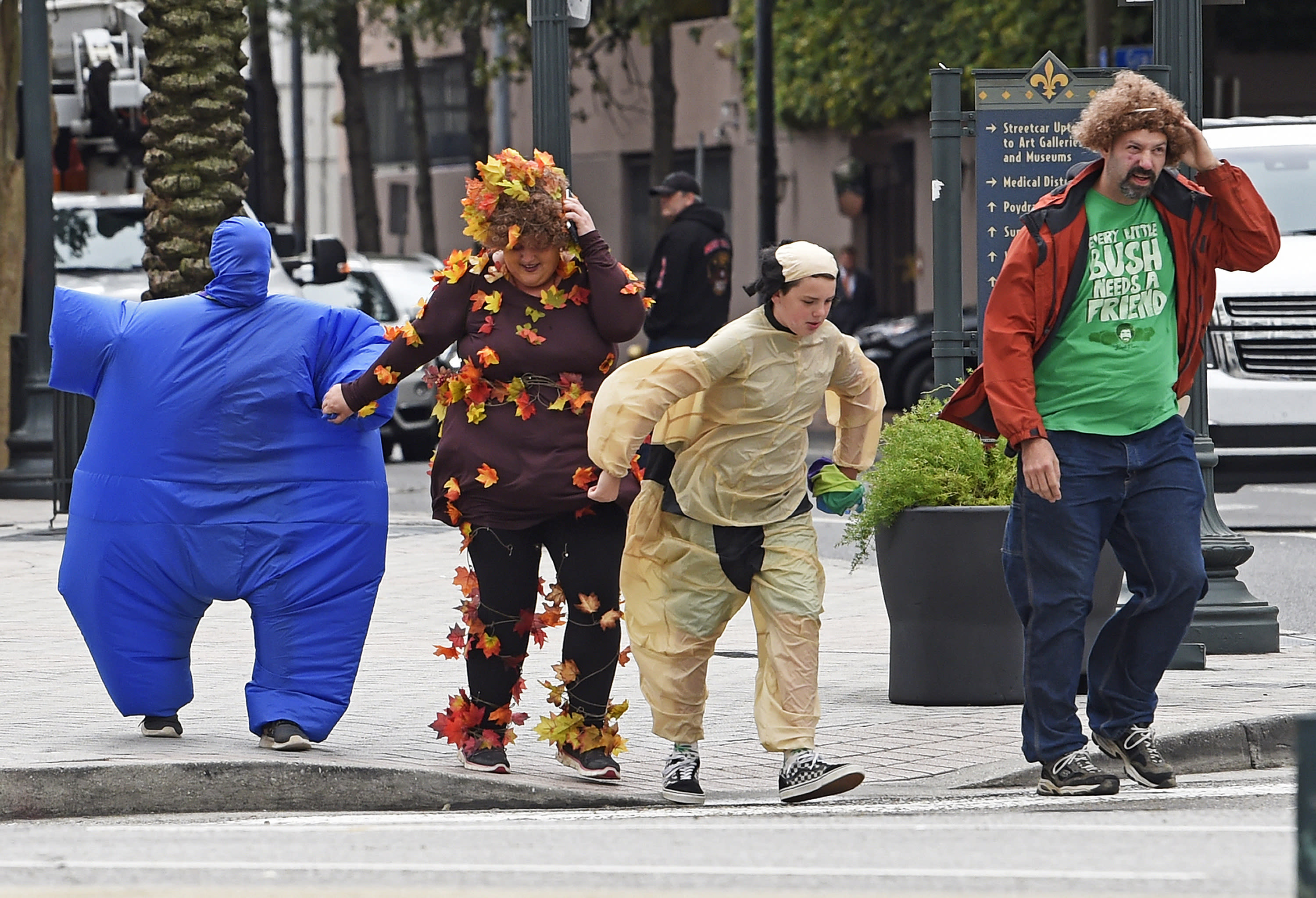 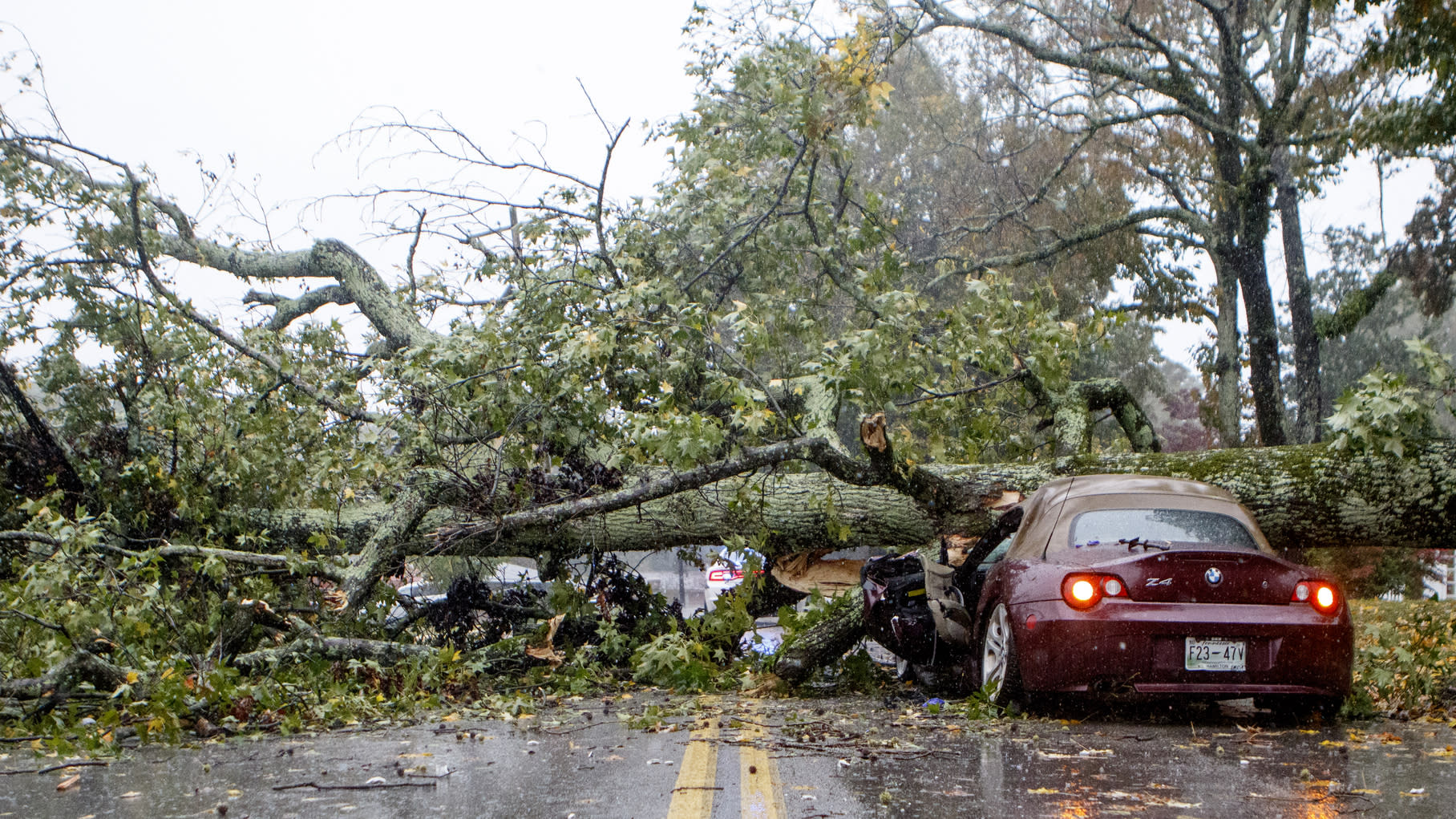 At least 420,000 customers from South Carolina up to Maine and in Ohio were without power just before midnight Thursday, according to a survey of outage maps for electric utilities covering 16 states and the District of Columbia. The National Weather Service warned that „severe thunderstorms capable of damaging winds and torrential rainfall will continue to push through” the northeast U.S. overnight, possibly accompanied by downed trees, flooding and more power outages.

Several tornado warnings were issued overnight, including for parts of New Jersey and Pennsylvania, southeastern Virginia, and eastern North Carolina.

Colder temperatures and gusty winds in the region were likely for Friday, the National Weather Service said. Storms with heavy rain and strong winds swept the central United States — from the Gulf Coast to the Great Lakes — on Thursday ahead of an arctic blast that forecasters said could bring near-record cold to the South.

Trees were toppled in the western Carolinas and Tennessee, where news outlets reported at least five people were injured when trees hit vehicles. Tornado watches during the day stretched from South Carolina to northern Pennsylvania.

At least 80,000 homes and businesses were in the dark because of intermittent power outages from Louisiana to West Virginia midday Thursday. A freeze warning reached across more than dozen states, from southwestern Texas into the South and Midwest. Overnight lows could dip into the upper 20s in parts of the Deep South, forecasters said.

A blanket of snow caused travel problems in Illinois, meanwhile, with snow forcing the cancellation of more than 200 flights at Chicago’s international airports.

As much as 3 inches (5 centimeters) of snow driven by 50 mph (80 kph) winds was predicted around the Great Lakes.

The storms provided another round of drought relief across the Southeast after weeks of dry weather endangered crops and increased fire risks. But a new federal report showed much of Alabama, Georgia and South Carolina are still too dry.

California wildfires are a perfect storm

SAN FRANCISCO — California is, once again, on fire. With howling winds sweeping toward the coastline and desert-like low humidity gripping the state, the Kincade fire in Northern California grew to 76,825 acres on Wednesday morning, while firefighters in the southern part of the state battled the Getty and Easy fires, which threaten thousands of homes, businesses — and the Ronald Reagan Presidential Library.

Faced with conditions optimal for wildfires, public power utility companies Pacific Gas & Electric and Southern California Edison have been forced to power down their transmission lines, cutting electricity service to millions of customers. Despite cutting power a week ago to portions of Sonoma County, PG&E says a downed wire may have started the Kincade fire.

All across California, residents are struggling to come to terms with what is being called the “new normal” for the state, in which the final months of the dry season are marked by wildfires that spread faster than seems possible, destroying thousands of homes and structures and blanketing large portions of the state with toxic smoke.

While there is no single cause for the perennial infernos that now occur in the Golden State, there are notable factors that are making them worse.

There is little disagreement among scientists that climate change is making California wildfires worse. Hotter temperatures dry out forest vegetation. According to data from NASA and National Oceanic and Atmospheric Administration, average summer temperatures have risen by 3.25 degrees Fahrenheit since 1896, the San Jose Mercury News reported. The 10 hottest years on record have also occurred since 1998. Climate change is also blamed for insect infestations that have contributed to killing millions of trees, which in turn present a heightened burn risk. There were an estimated 150 million dead trees in California in 2018. In 2013, that number was just 6.5 million, data from Cal Fires shows.

Wildfires are part of the history of the western United States in part because seasonal weather patterns bring dry conditions to states like California throughout the summer. Making matters worse, in October high pressure systems often park themselves over Nevada’s Great Basin, directing arid winds clockwise toward the Sierra Nevada. In Northern California, that weather pattern causes what are called “Diablo winds,” which this year brought gusts of over 90 miles per hour, fanning the Kincade fire. Southern California’s famous Santa Ana winds are part of the same phenomenon, and Tuesday’s gusts topping 70 miles per hour were coupled with single-digit humidity. Barring drought, California’s rainy season usually starts in late October and can extend through April.

PG&E, which supplies electricity to 16 million customers, has known for years that its electrical transmission lines were unsafe and needed updating, documents obtained by the Wall Street Journal show. The company declared bankruptcy in January in part because of the $30 billion in damages it owes victims of previous wildfires ignited by the company’s aging infrastructure. By preemptively shutting down power to millions of customers in October, the company acknowledged that its equipment posed a danger. But long-term fixes aren’t simple. The state has approximately 26,000 miles of high-tension transmission lines and 24,000 miles of lower-voltage ones, the San Francisco Chronicle reported. Burying them underground, where they would be safe from winds and falling trees, would take years and cost an average of $2.3 million per mile.

In response to the wildfires that ravaged California in 2018, President Trump blamed state officials for what he called “gross mismanagement of the fires.” While 60 percent of California’s forests are federally controlled, the president does have a point. A report by the Hoover Commission points to federal and state fire suppression strategies that, paradoxically, have presented greater fire dangers over time because forest fuel is thinned when fires are allowed to burn. The report also notes the decline in the number of controlled burns in California’s forests. “Put simply, properly managing forests saves lives and property, and helps preserve the forests that provide so many benefits to Californians,” the authors of the study wrote.

Minus 45 degrees in October? An Arctic blast is breaking records across western and central US by Doyle Rice, USA TODAY,USA TODAY•October 30, 2019 5 essential things to keep in your car this winter The calendar may say October but the weather is more typical of January in portions of the western and central U.S.”A wave of Arctic air has infiltrated the northern tier of the United States this week, shattering record lows, and threatening as many as 70 (other record lows) through Halloween,” AccuWeather said.Subzero cold was recorded as far south as the Grand Canyon on Wednesday morning, the Weather Channel said. Big Piney, Wyoming, plunged to minus 24 degrees before sunrise Wednesday.Notorious cold spot Peter Sinks, Utah, dipped to an incredible minus 45 degrees early Wednesday. This appeared to be the coldest October temperature on record anywhere in the Lower 48 states, according to Utah-based meteorologist Timothy Wright.

High temperatures Wednesday were forecast to be 30 to 50 degrees below normal across Colorado, Texas and the central Plains, according to meteorologist Ryan Maue of BAM Weather.