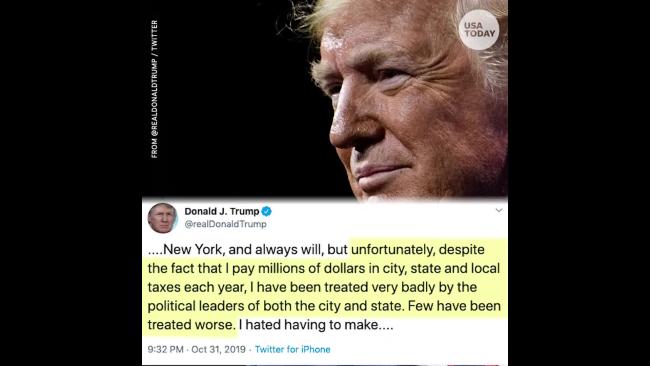 Scroll back up to restore default view.After a lifelong residency in New York City, President Donald Trump is officially trading in the skyscrapers of the Big Apple for the palm trees of the Sunshine State.The New York Times reported Thursday that Trump and First Lady Melania Trump filed separate “declarations of domicile” in Florida last month, a legal move that shifts his residency from Manhattan to his Mar-a-Lago Club in Palm Beach.Trump confirmed the move in a series of tweets Thursday night.“I hated having to make this decision, but in the end it will be best for all concerned,” Trump tweeted. “As President, I will always be there to help New York and the great people of New York. It will always have a special place in my heart!”According to NBC News, Trump has spent 99 days at his Mar-a-Lago club and golf course compared with 20 days at Trump Tower since he took office. But what prompted the official change in residency? Why would Trump move to Florida? Trump and his administration haven’t confirmed why the Queens native decided to officially declare his “Southern White House” as home, but many have speculated that politics and money play a large part.Trump criticized his political opponents in his “Farewell, New York” tweet Thursday suggesting his decision may have had to do with his treatment by political leaders in the city and state.“Despite the fact that I pay millions of dollars in city, state and local taxes each year,” he tweeted. “I have been treated very badly by the political leaders of both the city and state. Few have been treated worse.”New York Gov. Andrew Cuomo didn’t seem to mind Trump’s move to Florida and instead responded with a “good riddance.”“It’s not like Mr. Trump paid taxes here anyway,” Cuomo said in his statement. “He’s all yours, Florida.”Trump’s contributions to the state and city can’t be confirmed as he has refused to release his tax returns. However, moving to Florida could be a huge tax saver. The president and first lady would be escaping an 8.2%  state tax rate and a 3.87% city tax rate on income over $90,000, according to Joseph Callahan, attorney and president of Mackay, Caswell & Callahan, P.C. in New York.In order to avoid income tax, the Trumps can’t be in the state of New York for more than 183 days. However, the state can still tax some Trump dollars, Callahan explained, as part of his income tax could come from capital gains through the sale of real estate and, of course, property taxes on his New York properties.Trump would also be escaping New York state’s estate taxes, which would be a maximum of 16% on an estate worth over $10.1 million with an exclusion amount of $5 million. Florida doesn’t have income or estate taxes.”It’s an absolute no-brainer,” Callahan said on the president’s decision to move. „It’s excellent as a tax-saving decision.” ‘Good riddance’: Gov. Andrew Cuomo’s response to Donald Trump moving from New York to Florida Where does Trump live?The move means Trump’s permanent residence will no longer be Trump Tower, the Manhattan building that he has long called home.However, he will still be residing in the White House for the next year with weekend trips to his new, official residence in Mar-a-Lago.What’s a ‘declaration of domicile’?According to the Palm Beach County Clerk, a declaration of domicile is a sworn statement that basically says an individual is a resident of  that state and county. That individual is stating they reside in and maintain a place of residence there and intend to make it a permanent residence.Not every state requires you to file a declaration of domicile to make your residency official. The states that do require it often don’t have state taxes, such as Florida and Texas. How much?: Trump’s Mar-a-Lago visits cost Coast Guard nearly $20MWhy did President Trump and First Lady Melania Trump file separately?A married couple cannot file a declaration of domicile jointly like they can file tax returns.Copies of the president and first lady’s declarations of domicile show that they must file individually.However, according to paperwork published by the Times, they both declared primary residence at the same address in Mar-a-Lago.Contributing: Jon Campbell, USA TODAY. Follow Adrianna Rodriguez on Twitter: @AdriannaUSAT.This article originally appeared on USA TODAY: Why is President Donald Trump moving from New York to Florida? 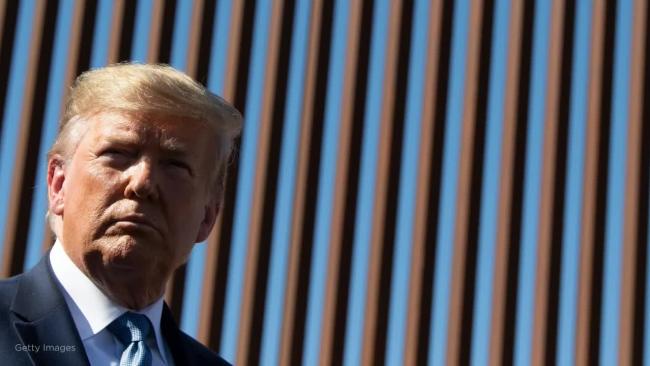 Scroll back up to restore default view. Visit Business Insider’s homepage for more stories.Smuggling gangs in Mexico are reportedly using power tools to cut large holes in walls at the southern US-Mexico border, according to a new report from The Washington Post.The steel-and-concrete portions of the walls, which President Donald Trump has touted as the solution to the flow of undocumented immigrants coming across the US-Mexico border, can be sawed apart with at least one commercially available cordless tool that retails for less than $100, according to the Post, which cites US border officials with knowledge of the damage.In addition to cutting through the walls, officials told the Post that smugglers have also repeatedly scaled and climbed over the walls with makeshift ladders, particularly in areas near San Diego.The report comes as the first and most detailed description of such breaches and says that the lack of government reporting means it is unclear how many times they have occurred. US Customs and Border Protection reportedly declined to provide further information about the number of wall breaches to the Post and had not yet fulfilled a Freedom of Information Act request seeking such data at the time of the report.One factor of deterrent is electronic sensors that are yet to be added but could sense where and when the wall was damaged, triggering repairs. However, one former border chief said smugglers would likely eventually find a way around those as well.The wall has been a costly and politically tense issue between lawmakers and Trump, after the president previously enacted what became the longest shutdown in government history when he did not relent in debates with lawmakers through December 2018 on his request for $5 billion to be allocated for the wall.Despite the president’s repeated pushes for the wall, environmental and immigration experts have expressed doubts about its possible effects on nearby areas and its overall efficacy. CBP officials were vocal during Trump’s weighing of different designs that a solid concrete wall wouldn’t be beneficial to agents who ideally would be able to see through to the other side.According to the Post’s report, smugglers are exploiting the „bollard” style design that the administration eventually settled on, which has been described as part of a „border wall system” as agents insisted a wall alone couldn’t safeguard the border. 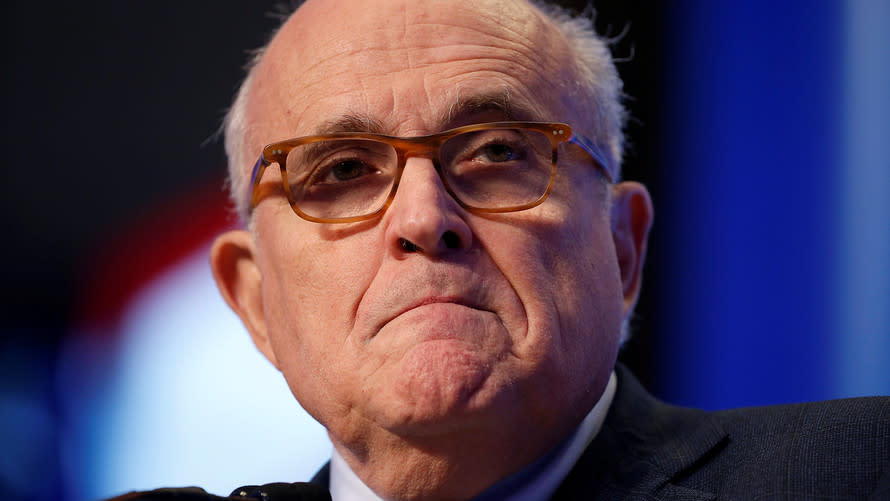 Rudy Giuliani@RudyGiulianiHey @NBCNews, last I checked the FBI, last year, had to ask Apple to unlock an iPhone too! We’re all human, just maybe not tonight…

1:30 AM – Nov 1, 2019Giuliani, who is President Donald Trump’s personal attorney, was apparently referring to the FBI effort to unlock the iPhone of the San Bernardino mass shooter in 2016. Apple refused to unlock it, and the FBI eventually was able to access the phone with the help of a third party.Besides the fact that Apple Inc. AAPL, +2.84%   did not unlock that iPhone, Giuliani apparently missed the point of the NBC News report — that less than a month after being named White House cybersecurity adviser in 2017, he reportedly took his phone to an unsecure location to get unlocked — potentially a major security breach for someone in the president’s inner circle.“There’s no way he should be going to a commercial location to ask for that assistance,” former FBI agent E.J. Hilbert, who worked in cybercrime and terrorism, told NBC News.Other experts agreed, saying it was “crazy” that Giulaini let someone he did not know — and had no security clearance — access his phone, and that vetted White House staffers should be able to handle such technical issues.“It’s unnerving to think that this individual has access to the most powerful person in the world and that sensitive communications could be disclosed to people who should not have access to them,” Michael Anaya, a former FBI agent who led a cyber squad, told NBC News.It’s not the first report of troubling lapses in digital security at the White House. In 2018, Politico reported that Trump used personal cell phones that were not equipped with sophisticated security software, leaving them vulnerable to hacking, and that Trump had rebuffed attempts to replace his phones because it would be “inconvenient.” The White House denied that report and said his call-capable phone was swapped out regularly, though the phone he tweets on does not need to be.Last week, Giuliani reportedly “butt-dialled” an NBC News reporter, leaving an accidental voice mail message in which he apparently talked about a security arrangement with a Middle Eastern nation. Giuliani reportedly butt-dialed the same reporter a few weeks prior.

North Korea on Oct. 31, 2019 fired two rockets from its new “super-large” multiple rocket launch system, potentially escalating tension between Washington and Pyongyang as talks over North Korea’s nuclear-weapons program stall out.The projectiles launched from Pyongannam-do, a province around Pyongyang, The New York Times reported. The munitions flew up to 230 miles before landing in waters between North Korea and Japan, the South Korean military said in a statement.The hermit state earlier had tested apparently the same 370-millimeter-diameter rockets in September and August 2019, explained Gabriel Dominguez Cespedes, an editor at Jane’s.“When North Korea first tested its super-large MRL system on Aug. 24, each of the two projectiles flew about 380 kilometers at a top speed of Mach 6.5 and reached an altitude of about 97 kilometers before falling into the Sea of Japan,” Dominguez Cespedes wrote.The “super-large” MRL system, which is comprised of an eight-by-eight launcher vehicle fitted with four launch tubes, was then tested on Sept. 10 from an area in North Korea’s western city of Kaechon, South Pyongan Province, with the two projectiles flying about 330 kilometers and reaching an altitude of around 50 to 60 kilometers, according to the [South Korean joint chiefs of staff]. The caliber of the projectiles used in the “super-large” MRL appears to be larger than 370 millimeters. The weapons, which both South Korea and Japan refer to as short-range ballistic missiles, seem to have small control surfaces on their noses: a feature seen on guided artillery rockets used in North Korea and other countries.The latest test-firings come after the South Korean military kicked off its annual “Hoguk” field training exercise on Oct. 28, which it says is purely defensive in nature. The two-week-long drills began at the same time as South Korea’s “Taeguk” command-post exercise.“The projectiles were the first such weapons that North Korea had tested since the country fired its Pukguksong-3 submarine-launched ballistic missile on Oct. 2 into waters off Japan,” The New York Times reporter Choe Sang-Hun explained. ‘It was the 12th time since early May that the North had tested ballistic missiles or other projectiles.”