‘Stunned, amused, and embarrassed’: Anonymous author describes what it’s like working for Trump by

Dylan Stableford Senior Writer,Yahoo News•November 8, 2019Imagine you’re in a meeting with your boss, an erratic, petulant egomaniac, averse to reading, prone to angry outbursts and known for an acutely short attention span. Then imagine your boss is the president of the United States. That, according to “Anonymous,” a self-described senior administration official and the author of an upcoming book, is the dilemma for those who work for President Trump inside the White House.“People who spend any time with Donald Trump are [made] uncomfortable by what they witness,” the author writes. “He stumbles, slurs, gets confused, is easily irritated, and has trouble synthesizing information, not occasionally but with regularity.”The author is the same person who wrote a controversial op-ed in the New York Times last year, saying he and other top appointees were working in secret to thwart some of Trump’s most outrageous ideas. Excerpts of the book, “A Warning,” were published Thursday by several news outlets, including the Times, the Washington Post, MSNBC and HuffPost.According to the book, administration officials would often strategize before and after meetings with Trump, who is likened to a “twelve-year-old in an air traffic control tower, pushing the buttons of government indiscriminately, indifferent to the planes skidding across the runway and the flights frantically diverting away from the airport.”The author describes the evolving process of trying to brief the president.“Early on, briefers were told not to send lengthy documents. Trump wouldn’t read them,” the author writes. “Nor should they bring summaries to the Oval Office. If they must bring paper, then PowerPoint was preferred because he is a visual learner. Okay, that’s fine, many thought to themselves, leaders like to absorb information in different ways.“Then officials were told that PowerPoint decks needed to be slimmed down,” the author continues. “He needed more images to keep his interest — and fewer words. Then they were told to cut back the overall message (on complicated issues such as military readiness or the federal budget) to just three main points. Eh, that was still too much.“Soon West Wing aides were exchanging ‘best practices’ for success in the Oval Office,” the author adds. “The most salient advice? Forget the three points. Come in with one main point and repeat it — over and over again, even if the president inevitably goes off on tangents — until he gets it. Just keep steering the subject back to it. ONE point.”

The White House issued a blanket statement blasting the book and its anonymous author.“The coward who wrote this book didn’t put their name on it because it is nothing but lies,” said White House press secretary Stephanie Grisham. Separately, the Justice Department sent a letter to the book’s publisher warning that the unnamed author may be violating “one or more nondisclosure agreements” by writing the book.The author also describes what it was like in the West Wing waking up to Trump’s early-morning Twitter tirades.“It’s like showing up at the nursing home at daybreak to find your elderly uncle running pantsless across the courtyard and cursing loudly about the cafeteria food, as worried attendants tried to catch him,” the author writes. “You’re stunned, amused, and embarrassed all at the same time.”Trump’s behavior can be so erratic, the author says, top administration officials have pre-written resignation letters. A group even considered a mass resignation over Trump’s response to the deadly 2017 white supremacist rallies in Charlottesville, Va., the author claims.

In the Times op-ed, titled “I Am Part of the Resistance Inside the Trump Administration,” the author said senior Trump officials were “working diligently from within to frustrate parts of his agenda and his worst inclinations” in order to “preserve our democratic institutions.”“It may be cold comfort in this chaotic era, but Americans should know that there are adults in the room,” the author wrote in the op-ed.In the new book, the author says it was a mistake to offer such reassurances.“I was wrong about the ‘quiet resistance’ inside the Trump administration,” the author writes now. “Unelected bureaucrats and cabinet appointees were never going to steer Donald Trump the right direction in the long run, or refine his malignant management style. He is who he is.”_Download the Yahoo News app to customize your experience. 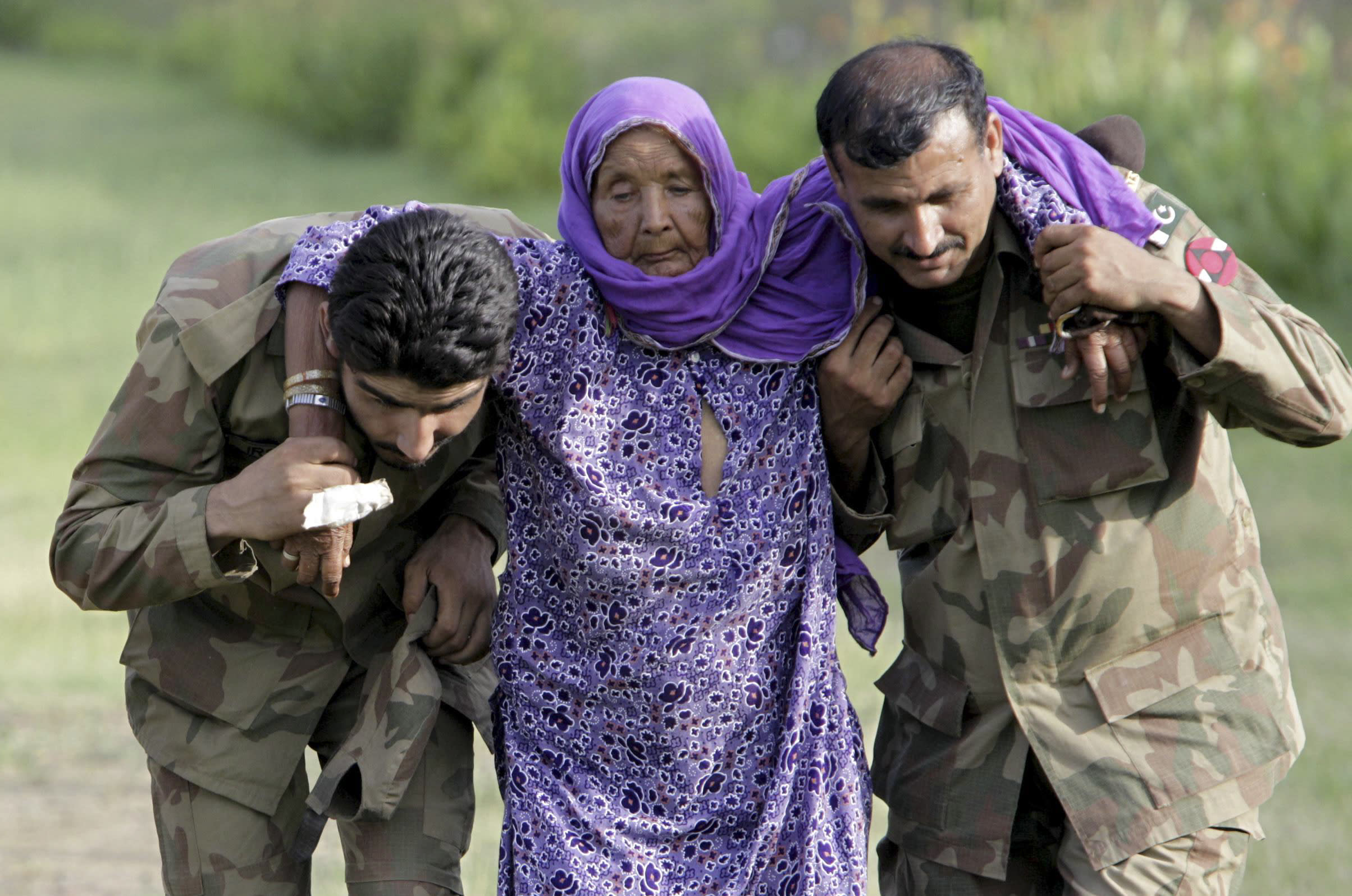 Social media propaganda is a tactic with a proven success rate. Countries and foreign actors are simply copying the methods used by Russians to spread misinformation about America’s 2016 presidential election, said P.W. Singer, the co-author of „LikeWar: The Weaponization of Social Media.”

Masked by social media accounts that looked like they belonged to average Americans, Russia duped people into sharing misleading or false images, text and videos about presidential candidates, newsworthy events or political parties.

„The lesson that they all took was that not only does it work — but it’s cheap and easy to pull off with little consequence,” Singer said. „This is the new normal in war, politics and business.” he said.

There are many examples from Syria, where viewers have weaponized misleading images to revile or cheer on the Turkish forces.

In early October, the ex-mayor of Ankara and other Twitter accounts shared footage of what purported to be a Turkish assault on the Kurds in Syria. The video was shared and viewed thousands of times, and ABC News aired it. But it turned out to have been taken at a military gun demonstration in Kentucky, and ABC later apologized for airing the footage.

However, dozens of misrepresented images shared widely with the help of hashtags have cast the Turkish invasion in a more favorable light. Since it began, Twitter accounts — some of which were just created in September — shared positive but misleading photos of Turkish soldiers that were liked and retweeted hundreds of times. The tweets linked the photos to hashtags like #TurkishArmyForThePeace and #TurkeyIsJustKillingTerrorists. Many of the tweets came from accounts that claimed to be based in the Middle East.

For example, a supposedly recent photo showing a Turkish soldier giving a Syrian girl water was, in fact, shot by an Associated Press photographer in 2015. And an image that purported to show a Syrian woman in purple being carried by Turkish soldiers made the rounds on Twitter but was, in fact, taken by AP in 2010, during flooding evacuations in Pakistan.

Turkey itself, which as of last week had detained 452 people for social media posts critical of the northern Syria, has also put out a tightly controlled narrative on Twitter.

One of the most widely shared photos was first posted to Twitter by Turkey’s ministry of defense, hours after the White House announced on Oct. 6 that U.S. troops would clear the way for an expected Turkish assault in northeastern Syria.

The image, which has been used by Turkish propaganda sites before, showed a kneeling Turkish soldier holding the hand of a little girl in a blue sweater against the backdrop of a military vehicle adorned with the Turkish flag. It was shared by Twitter users in subsequent days on Twitter, accompanied with the #TurkishArmyForThePeace hashtag.

Asked about the photos and hashtags used to spread the images, Twitter spokeswoman Liz Kelley told the AP the tech company has not seen any evidence of coordinated campaigns to share false information about the Turkish offensive on its site.

But VineSight’s independent analysis of several accounts that promoted these and other misleading pro-Turkey photos on Twitter in the invasion’s early days not only found signs of automation, but also noted that an overwhelming majority of the accounts’ followers listed locations in Pakistan.While it’s impossible to determine who is behind the accounts using only the publicly available information on profiles, VineSight’s findings suggest they are part of an automated network promoting certain hashtags, images and tweets.”It’s extremely difficult to build up such a network — it takes some time and manual work,” said Yoel Grinshpon, vice president of research for VineSight. „I would guess it’s somebody who has resources.”_Associated Press writer Elena Becatoros in Istanbul contributed to this report.Turkey says will send ISIS prisoners to home countries