Thanksgiving weather: Snow, wind could snarl travel in central, eastern USA as 55M clog roads, airports by Doug Stanglin, USA TODAY,USA TODAY•November 23, 2019 Like 55-million holiday travelers, a sprawling winter storm is expected to be on the move in the run-up to Thanksgiving, bringing the threat of snow, rain, strong winds — and major travel headaches — to central and eastern sections of the country.Wintry conditions are expected not only to delay travelers on icy, crowded Interstates, but also disrupt air travel with strong, gusty winds at key airports.”At this time, enough snow to create winterlike travel is anticipated from central and northeastern Colorado to much of Nebraska, northern Kansas, much of Iowa, northwestern Missouri, northwestern Illinois, southeastern Minnesota, central and eastern Wisconsin and northern Michigan,” AccuWeather Senior Meteorologist Brett Anderson said.Forecasters expect Tuesday into Wednesday to bring the worst conditions in the Midwest, with strong, gusty winds battering such key airports as Chicago’s O’Hare International Airport.

AccuWeather@breakingweatherStrong winds are likely to add further headaches to Thanksgiving travelers hitting the roadways and taking to the sky across the Northeast around midweek: https://bit.ly/37w8ruO 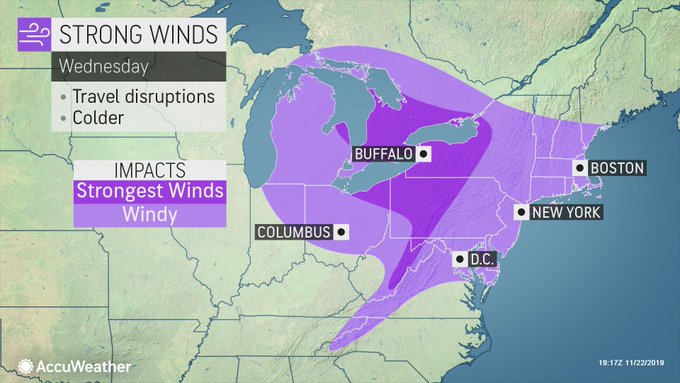 2:00 PM – Nov 23, 2019AccuWeather Senior Meteorologist Alex Sosnowski said winds are expected to increase around the eastern Great Lakes and become strong and gusty over much of the Northeast from Wednesday afternoon into Thanksgiving DayHe said winds are likely to  hit 40-50 mph with, locally higher gusts possible, and „could end up being very disruptive to travel in the region.”Depending on the storm’s midweek track, the frontal system on Wednesday will likely bring rain along the Interstate 95 corridor in the mid-Atlantic, with snow expected in parts of the Great Lakes and interior Northeast, according to The Weather Channel.AAA says the 55 million who plan to go at least 50 miles or more from home for Thanksgiving mark an increase of 2.9% over last year — the second largest number since the association began keeping tabs in 2000.For the 49.3 million people traveling by automobile, major delays should peak on Wednesday with trips taking as much four times longer as commuters mix with travelers, according to INRIX, a global transportation analytics company that partners with AAA to compile holiday travel data.A separate storm could also bring coastal rain and mountain snow to the Pacific Northwest both on Wednesday and on Thanksgiving Day. Across the southern tier of the country, rain is expected from California to Georgia on Wednesday, with potential delays on the travel corridors.This article originally appeared on USA TODAY: Thanksgiving weather forecast: Travelers could face storms, winds

Gusty winds may prove ‘very disruptive’ to Thanksgiving travel in northeastern US by Renee Duff,AccuWeather•November 23, 2019 Strong winds are likely to add further headaches to Thanksgiving travelers hitting the roadways and taking to the sky across the Northeast around the middle of next week.The winds will whip around a storm that will first unleash snow and possibly severe weather over portions of the central United States on Tuesday and Tuesday night.As the storm swings eastward on Wednesday, the busiest travel day of the year, the gusty weather will charge on as well.”Winds are forecast to increase around the eastern Great Lakes during Tuesday night and become strong and gusty over much of the Northeast from Wednesday afternoon into Thanksgiving Day,” AccuWeather Senior Meteorologist Alex Sosnowski said.

Winds are likely to reach 40-50 mph with locally higher gusts possible.”Increasing winds could end up being very disruptive to travel in the region,” Sosnowski said.Motorists, especially those of high-profile vehicles, will need to keep a firm grip on the steering wheel to avoid veering into other lanes on stretches of interstates 70, 77, 79, 80, 81, 86, 87, 90, 91 and 95.Rain accompanying the storm may add further travel difficulties by reducing visibility and creating a heightened risk of hydroplaning while traveling at highway speeds.The windy weather will impact the major hubs of Boston, New York City, Philadelphia, Baltimore, Pittsburgh and Washington, D.C., on Wednesday.”During episodes of strong, gusty winds, officials must space out the arriving and departing aircraft,” Sosnowski said.”This can cause flight delays and cancellations to increase exponentially during the heavy volume of holiday travelers.”

At the very least, airline passengers will face more turbulent arrival and departure flights from these hubs.As the storm swings off the coast by Thanksgiving Day, chilly air will be funneled into the Northeast, allowing rain to switch over to snow showers across interior areas.Winds are forecast to remain gusty in New York City on Thanksgiving Day, which could ground some of the most iconic and beloved balloons of the Macy’s Thanksgiving Day Parade.

The famous balloons of the Macy’s Thanksgiving Day Parade can only be operated if sustained wind conditions stay below 23 mph and wind gusts are not expected to exceed 34 mph based on city regulations, according to Orlando Veras, a Macy’s Parade spokesman.These regulations were not in place during the 1997 Macy’s Thanksgiving Day Parade as the balloons flew during winds of up to 43 mph, according to The New York Times. The intense winds damaged balloons and injured four parade spectators.Regardless, it will be necessary for spectators to bundle up for this year’s festivities, with temperatures generally in the 40s F and AccuWeather RealFeel® Temperatures in the 30s. Otherwise, it should be dry for the parade with at least partial sunshine.Chilly, blustery weather is likely to persist across the Northeast for Black Friday shoppers.Download the free AccuWeather app to check the forecast in your area. Keep checking back on AccuWeather.com and stay tuned to the AccuWeather Network on DirecTV, Frontier and Verizon Fios. 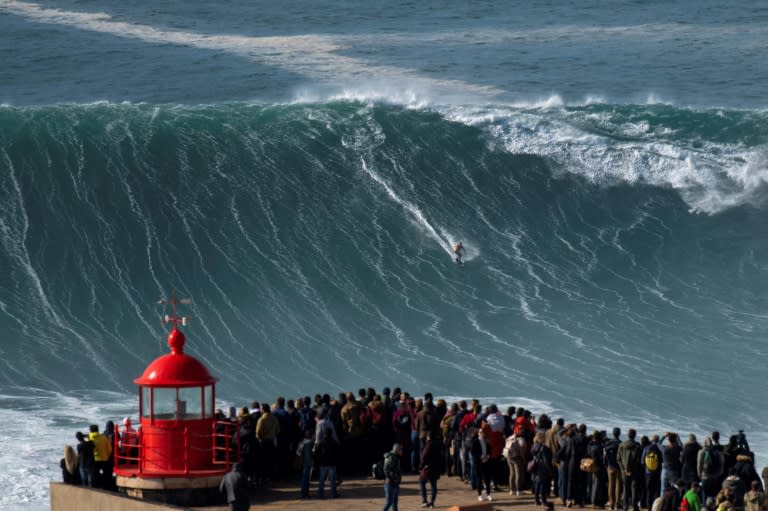 Waves in Nazare, on Portugal’s Atlantic coast, can reach up to 30 metres during the winter (AFP Photo/Olivier MORIN)Nazaré (Portugal) (AFP) – Big wave surfers have been flocking to a formerly sleepy Portuguese fishing town, chasing monster waves that are some of the highest ever surfed.Earlier this month the news broke that a set of fearsome 20-metre (65-feet) waves were coming to the small town of Nazare on Portugal’s Atlantic coast.

The message spread like wildfire and soon extreme surfers and sports fans — as well as keen photographers — arrived at the town’s Praia de Norte beach.

They gathered on the roof of a red lighthouse, listening to the deafening roar and watching in awe as the waves smashed against the cliffs. From the viewing point you cannot see where the waves end, giving the illusion the colossal walls of water could engulf their audience.

But the masses just missed out on seeing French surfer Justine Dupont have the ride of her life on November 13.

It could be a new surfing world record set by a woman.

„I began riding the wave, I felt I was going faster than usual, and that it was steeper,” the 28-year-old surfer tells AFP.

„I had the feeling it was never ending… I could fly away!”

The massive wave has not been measured yet, but is expected to be at least 20 metres high.

It will have to exceed the 2018 mark of 20.72 metres set by Brazilian surfer Maya Gabeira, also in Nazare, to become a record.

The verdict, judged by the governing body the World Surf League, will not be given until spring next year.

She said the seaside town with a population of 15,000 has become a surf haven over the last few years.

„It’s mad!” she said. „Two years ago we went to see the sea by the lighthouse, there were no cars parked — now, you can’t drive.”

The monster waves have always crashed at the town’s beach, but surfers had previously ignored Portugal and gravitated towards beaches in California and Hawaii.

Nazare was put on the surfing map in 2010 when the town’s mayor launched an initiative to attract surfers during the winter.

„We were looking for someone who could develop big wave surfing” said Pedro Pisco, a local sports minister.

He asked for help from Garrett McNamara, who until last year held the world record for the highest wave ever surfed.

„No surfer considered Portugal a great surfing destination, but I was looking for a 100-foot (30-metre) wave,” Hawaiian surfer said.

A Nazare bodyboarder invited McNamara to the town, wanting to find someone who could take on the spectacular waves.

Today, at the age of 52, the surfer is considered a „god”, said Anne-Marie Sana-Boisson, who owns a market stall in Nazare.

She said the town has changed rapidly over the last four years — and not necessarily for the better.

„At first there was a few people but now it’s crowded.”

She said many buildings are being constructed and sold, making it „hard to find houses”.

But she admitted the town has become „more dynamic”. And, she adds, not everything is closed over winter as it was before. 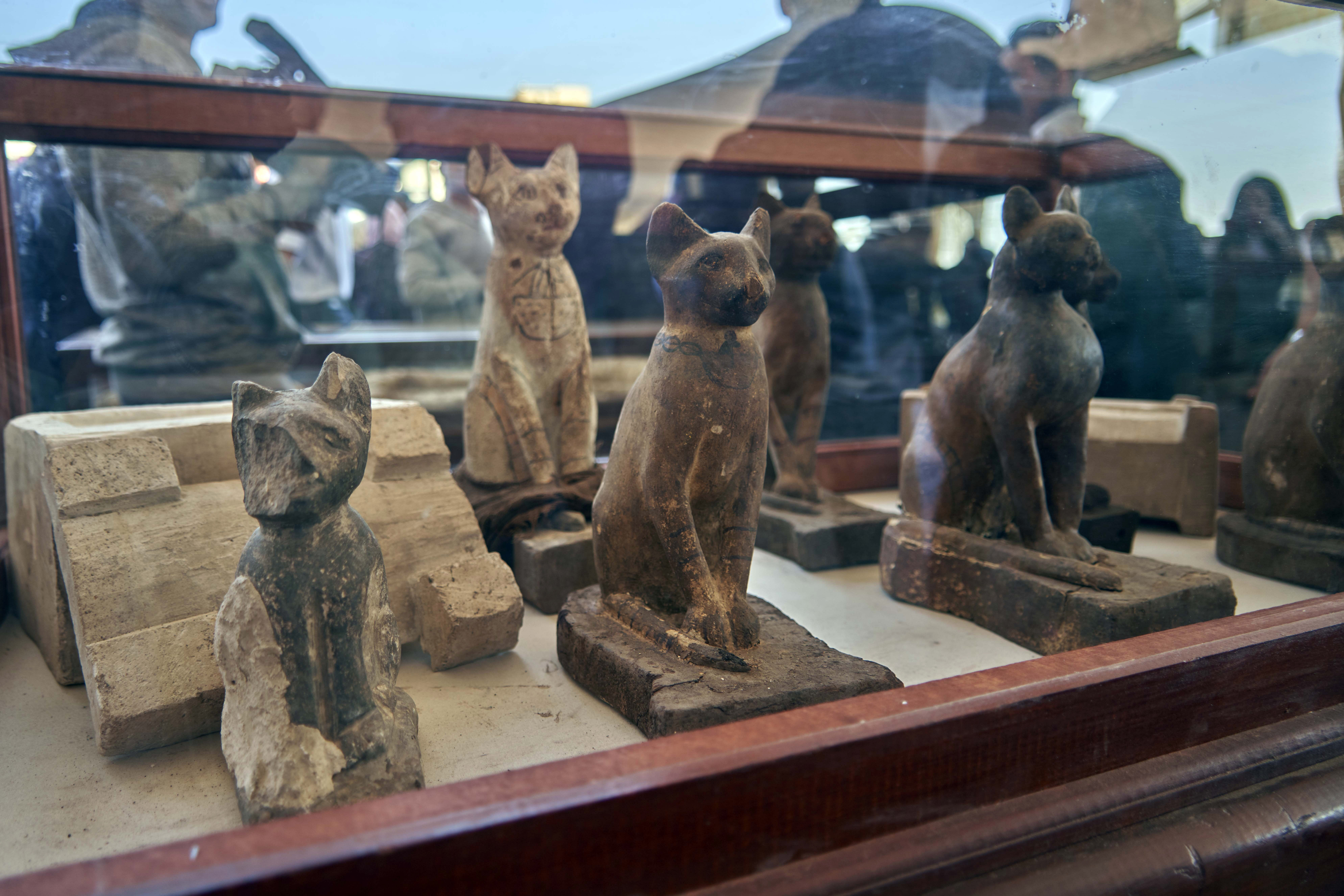 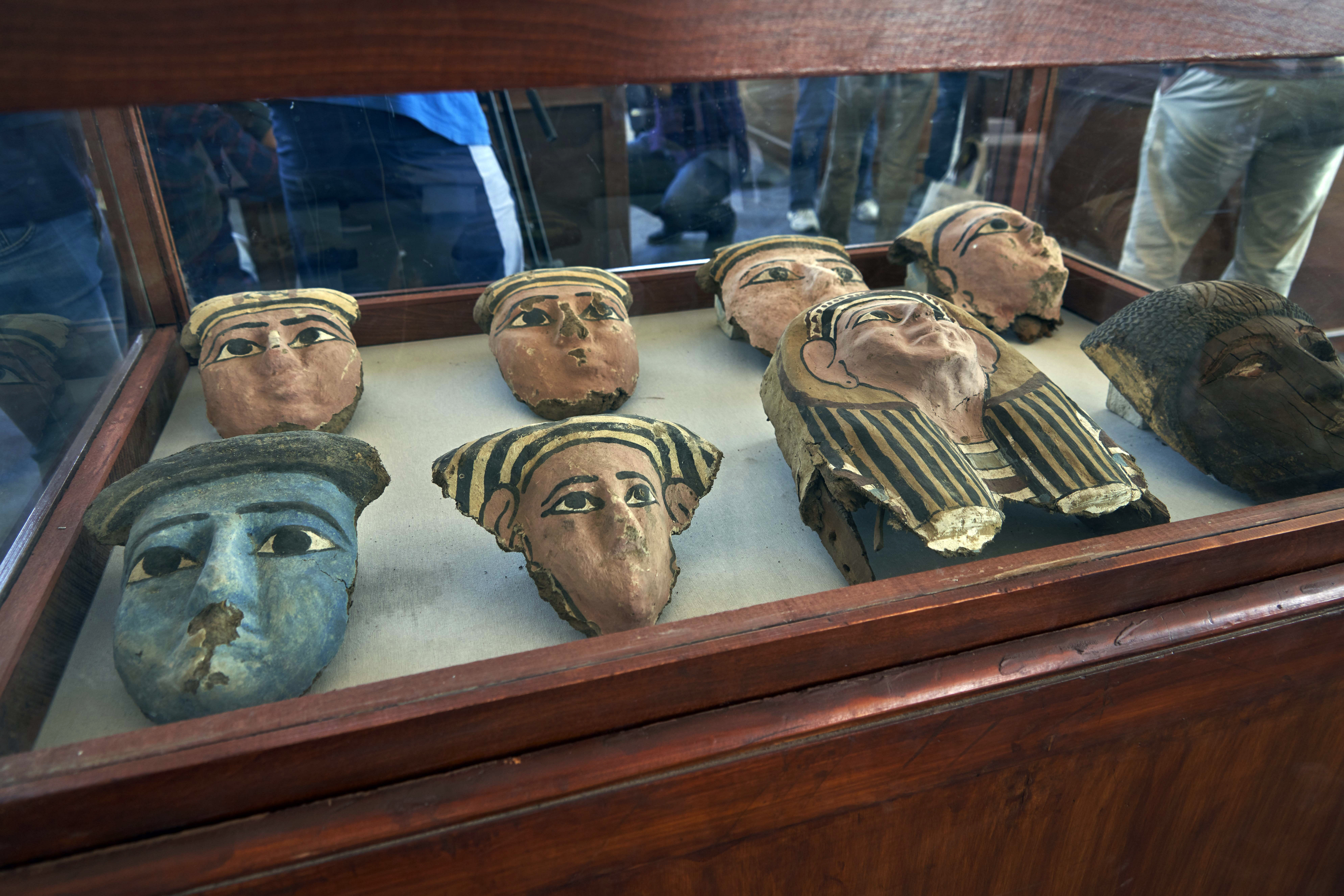