Trump Dismisses Articles Of Impeachment Against Him, Says His Actions Weren’t Crimes by Sanjana Karanth,HuffPost•December 11, 2019 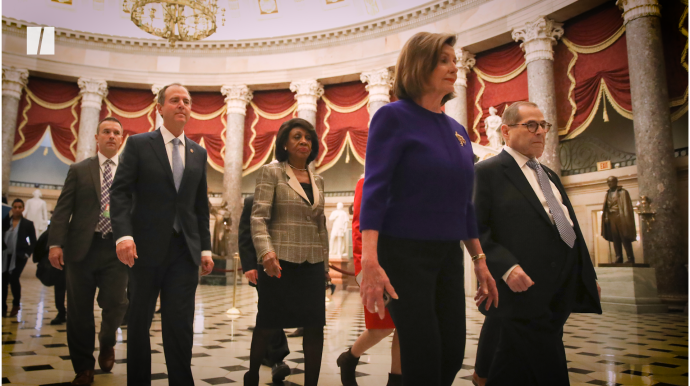 Replying to @atrupar Days after getting mocked by European leaders and Trudeau in a viral video, Trump claims, „this country is so respected. And we were not respected four years ago. We were laughed at.” 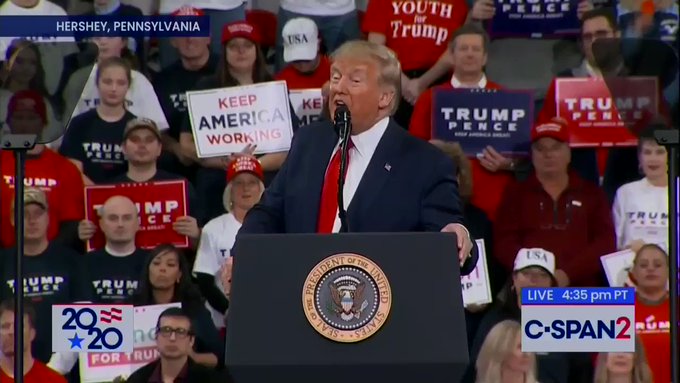 Aaron Rupar@atrupar Trump claims that Democrats are trying to „overthrow our democracy” by following the Constitution’s procedures for impeaching the president   2:41 AM – Dec 11, 2019

The two articles of impeachment are charges of abuse of power and obstruction of Congress, which contrary to Trump’s remarks, are considered crimes. Trump is accused of abusing the power of his office by pressuring Ukrainian President Volodymyr Zelensky to investigate his political rival, former Vice President and 2020 candidate Joe Biden and his son Hunter Biden. He’s also accused of obstructing Congress by blocking the House’s subpoenas while lawmakers investigated his behavior.“The president holds the ultimate public trust,” House Judiciary Chairman Jerry Nadler (D-N.Y.) said at a news conference Tuesday. “When he betrays that trust and puts himself before the country, he endangers the Constitution, he endangers our democracy, and he endangers our national security.”The Judiciary Committee said it will begin its markup of the articles on Wednesday evening, and the full House will likely vote on impeachment next week.

JUST IN: House Judiciary Committee announces it will begin markup of articles of impeachment against Pres. Trump on Wednesday evening. https://abcn.ws/35b266H

See ABC News Politics’s other Tweets Vice President Mike Pence emphasized his support of Trump at Tuesday’s rally, calling the articles of impeachment a “disgrace.”“You know, the truth is they’re trying to impeach this president because they know they can’t defeat this president,” Pence said before Trump took the stage.Later in his speech, Trump said Democrats are only impeaching him “to win the election,” and that the word impeachment is “a dark, ugly word.”“They are impeaching me. Do you know why?” Trump asked. “Because they want to win an election, and that’s the only way they can do it.”If the president is impeached, the Republican-controlled Senate would hold a trial likely to begin in the beginning of next year. A two-thirds majority vote is required to successfully remove a president from office, which would mean that about 20 Republican senators would need to join every Democrat in voting to oust Trump.But Republicans have so far been mostly steadfast in their defense of the president’s efforts to withhold nearly $400 military aid to a foreign country until its leader committed to investigating a Democratic rival ahead of a presidential election. While Democrats have laid out the evidence of Trump’s attempted quid pro quo, Republicans say the president’s demands to Ukraine don’t amount to a quid pro quo.House Intelligence Chairman Adam Schiff (D-Calif.) ― who lead his committee’s marathon impeachment hearings ― said Tuesday that he believes the evidence against Trump is “overwhelming” and “uncontested.”“The president’s oath of office appears to mean very little to him,” Schiff said. “But the articles we put forward today will give us a chance to show that we will defend the Constitution and that our oath means something to us.”Love HuffPost? Become a founding member of HuffPost Plus today.This article originally appeared on HuffPost.

Former U.S. ambassador to Canada: USMCA deal is a rare ‘win, win, win’ by Adriana Belmonte Associate Editor,Yahoo Finance•December 10, 2019House Dems reach an agreement on USMCA House Democrats announced on Tuesday that it would support the passage of the United States-Mexico-Canada Agreement (USMCA) after the deal spent months in limbo.And while details of the official deal are scarce, House Speaker Nancy Pelosi described the deal to replace North American Free Trade Agreement (NAFTA) as a “victory for American workers.”Bruce Heyman, the former U.S. ambassador to Canada from 2014 to 2017, went even further.“It’s one of those rare circumstances we’ve seen now for the last few years, where you have a win-win-win,” Heyman said on Yahoo Finance’s On the Move. “You have a win for not only the administration, but also Congress. You have a win for American workers, farmers, and the environment. You have a win for Canada and Mexico. And so altogether, I think that this should be a day to celebrate our trading relationship.”He added that while his preference was that the aborted Trans-Pacific Partnership (TPP) would have served as the replacement to NAFTA, the new deal will have a similar effect.“Lo and behold, the president said the TPP was bad and NAFTA was bad,” Heyman said. “But what did we get? 65% to 70% of the exact language in this new USMCA is TPP. They lifted it right out of TPP. The rest is pretty much the structure of NAFTA with the exception of these auto provisions that were put in.”

U.S. President Donald Trump, Speaker Nancy Pelosi and Vice President Mike Pence applaud during the State of the Union address in the chamber of the U.S. House of Representatives at the U.S. Capitol Building on February 5, 2019 in Washington, DC. (Photo: Doug Mills-Pool/Getty Images)‘The auto industry is facing a whole cyclical change’ On the U.S. side, the USMCA is said to provide an economic boon to the automaker industry. The American Automotive Policy Council stated that the USMCA will incentivize a $23 billion increase in U.S. annual parts and sales alone. The deal will also reportedly to raise wages in Mexico.“The auto industry is facing a whole cyclical change that is taking place after an 11-year recovery, and now moving into a whole different cycle of people’s usage of automobiles and the types of automobiles that they use,” Heyman said. “So I think it’s a bit tricky. The administration, though, definitely came in with the aim of protecting American jobs and workers. The biggest pluses that we had at the early years of NAFTA came from plants moving to Mexico at these lower labor rates.” According to the Wall Street Journal, the USMCA will require that “a certain proportion of a car will have to be produced by workers with higher wages, and a greater proportion of components will have to originate in North America.” The production stems from Mexican workers, who will reportedly have less restrictions on forming unions and demanding fair pay.

President Donald Trump, center, reaches out to Mexico’s President Enrique Pena Nieto, left, and Canada’s Prime Minister Justin Trudeau as they prepare to sign a new United States-Mexico-Canada Agreement that is replacing the NAFTA trade deal, during a ceremony at a hotel before the start of the G20 summit in Buenos Aires, Argentina, Friday, Nov. 30, 2018. (AP Photo/Martin Mejia)“By increasing the hourly wage on content on American automobiles and increasing North American content of steel and aluminum and parts, it just enhances the ability for North America to compete more effectively,” Heyman said. “That all being said, the auto industry is facing so many other challenges here that might get mixed up in today’s news.” Heyman also highlighted the environmental provisions and prescription drug changes that come with the USMCA. “You also have environmental enforcement provisions that are put in, which is forcing all three countries to maintain and support environmental standards,” he said. “And you have these prescription drug changes that the administration tried to put in an expansion of the patent life for a lot of the drug companies. And we’re trying to lower costs for Americans and others for health care. Doing that really ties the hands of Congress, so that was removed. We really have a good outcome of taking TPP, some of NAFTA, and then putting more enforcement in.”There is one aspect, though, that may allow the USMCA to go a long way — the fact that it’s no longer called NAFTA.“The word ‘NAFTA’ became so toxic politically that it’s now been replaced with USMCA,” Heyman said. “Albeit the trade agreement isn’t so significantly different from NAFTA, I think optically it will appear much better.” Adriana is an associate editor for Yahoo Finance. She can be reached at adriana@yahoofinance.com. Follow her on Twitter @adrianambells.

A former high-ranking Mexican security official who led the country’s crackdown on organized crime in the mid-2000s was arrested in the US on Monday and been charged with conspiracy to import and distribute drugs and making false statements.Genaro Garcia Luna, 51, was arrested in Dallas by US federal agents, according to the US district attorney for the Eastern District of New York, which said it plans to seek his removal to face charges in New York.”Garcia Luna stands accused of taking millions of dollars in bribes from ‘El Chapo’ Guzman’s Sinaloa Cartel while he controlled Mexico’s Federal Police Force and was responsible for ensuring public safety in Mexico,” US Attorney Richard P. Donoghue said in the release.Garcia Luna faces three counts of conspiracy to import and distribute cocaine and a fourth count of making false statements with regard to an immigration naturalization application.Garcia Luna began his career with Mexico’s Center for National Security and Investigation in the late 1980s before moving to the federal police in the late 1990s. He was then head of Mexico’s federal investigation agency, AFI, between 2001 and 2005 and secretary of public security, then a cabinet-level position in control of the federal police, between 2006 and 2012.

ALFREDO ESTRELLA/AFP/GettyImages He was 38 when appointed to the latter position by then-President Felipe Calderon but already had nearly 20 years of experience in Mexico’s security services, much of it spent tracking organized crime and drug trafficking.”By his late 20s, he was considered something of a wunderkind,” according to a 2008 New York Times profile.”He really was the architect of Calderon’s war on drugs,” said Mike Vigil, former chief of international operations for the US Drug Enforcement Administration, who worked with Garcia Luna in Mexico in the 1990s.