The heavy rain is expected to start before midnight Sunday and continue until around 10 a.m. Monday, just in time for the holidays, federal forecasters told the Miami Herald.

“After the thunderstorms, there will be showers, a windy breeze, and inclement weather,” said Sean Miller, a meteorologist at the National Weather Service. “The rest of the week is expected to be fairly quiet, just in time for Christmas Eve and Christmas day.”

High temperatures will remain in the 70s and lows will stay in the 60s through Wednesday. In addition to flooding, the east coast of South Florida will also be at risk of tornadoes, Miller added.

The death toll from a volcanic eruption in New Zealand earlier this month has risen to 19 after police said on Monday another person died at an Auckland hospital overnight.

There were 47 people visiting the tourist destination of White Island when the volcano erupted on December 9, killing 13 people initially and leaving more than two dozen others in hospital with severe burns.

The latest victim is the sixth person to die in hospitals in New Zealand and Australia in the two weeks since the eruption.

Two of the victims’ bodies have not been recovered after authorities believe they were washed out to sea in a storm soon after the eruption.

Helicopter pilots and boat operators helped the injured off the island immediately after the eruption, but emergency services did not return to the island to recover bodies until four days later because they considered the site remained too dangerous.

In a brief statement on Monday, police said they had been advised just before 11 pm on Sunday of the latest death at Middlemore Hospital. Police did not immediately the release the victim’s name.

Many of those killed and injured were Australian tourists who had been travelling aboard the Royal Caribbean cruise ship Ovation of the Seas.

White Island, also known by its Maori name, Whakaari, is the tip of an undersea volcano about 30 miles off New Zealand’s North Island and was a popular tourist destination before the eruption. It’s unclear if the privately owned island will ever be reopened for tourist visits.

Many people have questioned why tourists were still allowed on the island after New Zealand’s GeoNet seismic monitoring agency raised the volcano’s alert level on November 18 from 1 to 2 on a scale where 5 represents a major eruption, noting an increase in sulfur dioxide gas, which originates from magma.

New Zealand authorities are investigating the circumstances around the disaster.

According to the police, 69 total vehicles were involved in the wreckage. Photos depicted firefighters and other emergency personnel standing on the hoods of mangled vehicles looking for people to rescue. No fatalities or life-threatening injuries were reported.

„My thoughts are with all involved in the multi-vehicle accident near Williamsburg this morning,” Virginia Gov. Ralph Northam tweeted on Sunday. „Grateful for the emergency crews, first responders, hospital staff, @VSPPIO, and @VaDOT personnel who are working around the clock to keep people safe this holiday season.”

„In situations such as this, the road may appear wet, rather than icy, hence the term black ice,” AccuWeather Senior Meteorologist Alex Sosnowski said.

According to Sosnowski, temperatures ranged from the upper 20s to the lower 30s in southeastern Virginia before and shortly after daybreak with areas of fog.

„The sudden low visibility in parts of the region created a dangerous visibility situation on top of the black ice condition,” Sosnowski said.

„This just demonstrates that even during a mild and storm-free weather pattern, that a few fog patches this time of the year can be dangerous with freezing temperatures,” Sosnowski said.Download the free AccuWeather app to check the forecast in your area. Keep checking back on AccuWeather.com and stay tuned to the AccuWeather Network on DirecTV, Frontier and Verizon Fios. 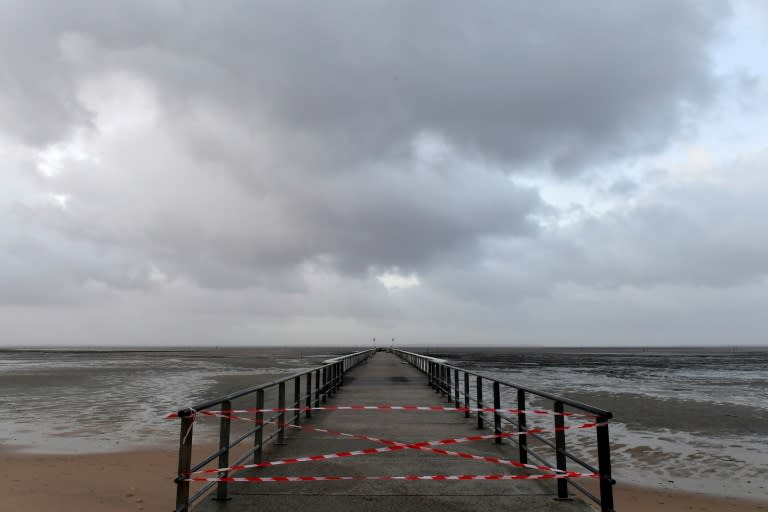 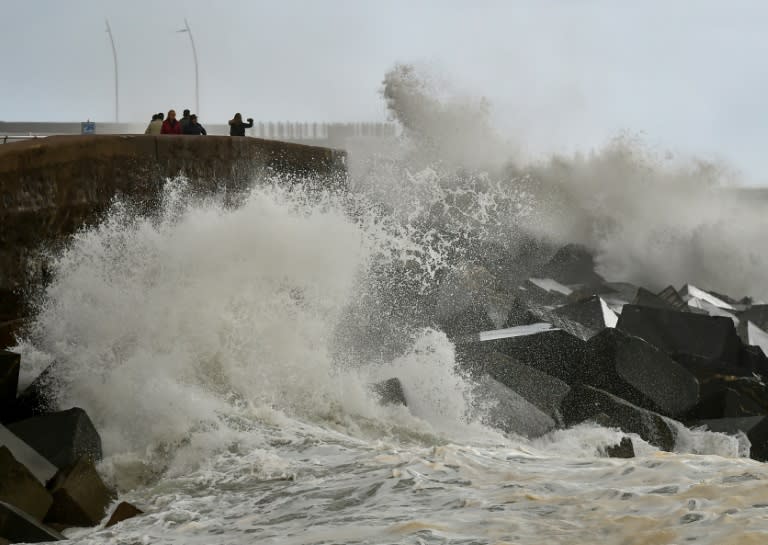 Across southwestern France, violent winds left 110,000 households without electricity
Across southwestern France, violent winds left 110,000 households without electricity (AFP Photo/NICOLAS TUCAT)Madrid (AFP) – The death toll from storms that have battered Spain, Portugal and France rose to nine on Sunday as the region braced for more violent winds and heavy rain.Storms Elsa and Fabien have flooded rivers, brought down power lines, uprooted trees and disrupted rail and air travel across the region, leaving more than 118,000 households without electricity.Two people have so far died in Portugal and seven have now been killed in Spain, the worst affected country, after a fisherman was swept off rocks into the sea in Catalonia.The local government said three police officers and another fisherman had to be rescued after they tried to save the man in the resort town of Sant Feliu de Guíxols, 100 kilometres (70 miles) northeast of Barcelona.The deaths in Spain include a South Korean woman killed by debris falling from a building in Madrid and a Dutch man who drowned windsurfing in rough weather off the Andalusian coast.As a weakened Storm Elsa moved over Britain on Saturday, Storm Fabien quickly moved in, bringing winds of 170 kilometres per hour to Galicia in northwestern Spain, forcing the cancellation of 14 flights according to Spanish airport operator Aena.Some 8,000 households in Galicia were without power due to damage caused to power lines by the wind, local officials said.Eight Madrid city parks remained shut on Saturday because of the strong winds.However, Spanish officials said on Sunday that Fabien was moving away quickly.Parks and cemeteries were also closed in Bordeaux in southwestern France on Saturday while the Arlette Gruss circus, which had set up in a big tent in the city’s main square, cancelled three performances.France’s weather office placed 15 regions in the southwest of the country on orange alert Saturday, as the storm battered its Atlantic coast.The winds were as fast as 148 kph at Socoa, in the southwest near the border with Spain. Even on the northwest coast of Brittany, winds reached up to 120 kph.The region was still being buffeted by gusts of up to 90 kilometres an hour on Sunday.Across southwestern France, violent winds left 110,000 households without electricity, officials said on Sunday.France’s SNCF rail network cancelled services between Bordeaux, Toulouse and Hendaye in the southwest because of the likelihood of winds blowing trees down on to the line.Officials on the French Mediterranean island of Corsica closed all the island’s airports because of the approaching storm. Ferry services to the mainland have also been suspended.Roads into Corsica’s city of Ajaccio were also closed to try to prevent people from getting caught in floods.burs-lbx/jxb/txw