Trump Shrugs Off Kim Jong Un’s Nuclear Testing Threat: ‘He Likes Me’  by Dominique Mosbergen,HuffPost•January 1, 2020 Hours after North Korean leader Kim Jong Un signaled that his country is developing a “new strategic weapon” and could soon resume testing nuclear weapons and long-range ballistic missiles, President Donald Trump appeared to shrug off the potential threat — saying at a New Year’s Eve party that Kim “likes me” and is a “man of his word.” Kim — as reported by Korean Central News Agency, the state mouthpiece — said on Wednesday local time that he no longer felt obliged to stick to a self-imposed moratorium on nuclear and long-range missile testing, which he said Pyongyang has abided by for the past two years.The North Korean leader accused the U.S. of engaging in “gangster-like acts,” such as continuing to hold joint military drills with South Korea. Under such conditions, Kim said, there is no reason for Pyongyang to remain “unilaterally bound to the commitment any longer.”Kim did not go so far as to say that he was ditching nuclear negotiations with the U.S., which have stalled since 2018 when Trump and Kim made vague promises to work toward denuclearization in the Korean Peninsula during a summit in Singapore. But Kim “confirmed that the world will witness a new strategic weapon to be possessed by [North Korea] in the near future,” KCNA reported, without elaborating on the type of weapon it would be.

QuickTake by Bloomberg@QuickTake “I think he’s a man of his word,” Trump says of North Korean leader Kim Jong Un 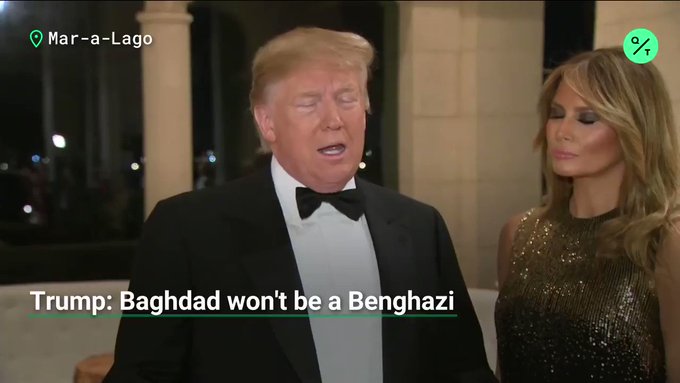 4:32 AM – Jan 1, 2020 Asked about Kim’s strong rhetoric at a New Year’s Eve bash held at Mar-a-Lago, Trump’s Palm Beach resort, on Tuesday night, the president said only that he and Kim “get along” and had come to certain agreements in Singapore.“He likes me, I like him, we get along,” Trump said when asked about Kim’s remarks from earlier in the day. Pyongyang is 14 hours ahead of Palm Beach. “He did sign a contract, he did sign an agreement talking about denuclearization. … That was done in Singapore, and I think he’s a man of his word, so we’re going to find out, but I think he’s a man of his word,” Trump continued.

U.S. Secretary of State Mike Pompeo told CBS News earlier in the day that it would be “deeply disappointing” if Kim “reneged on the commitments he made to President Trump.”

“He made those commitments to President Trump in exchange for President Trump agreeing not to conduct large-scale military exercises,” Pompeo said. “We’ve lived up to our commitments. We continue to hold out hope that he will live up to his as well.”Also on HuffPost Love HuffPost? Become a founding member of HuffPost Plus today.This article originally appeared on HuffPost. 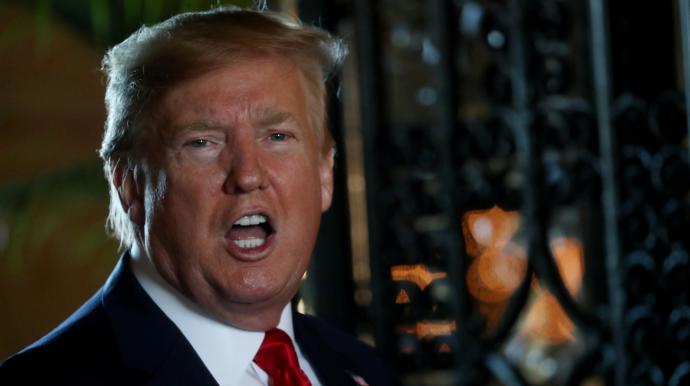 Scroll back up to restore default view.A new study from the Federal Reserve found that President Trump’s tariffs are backfiring.According to the Fed study, the tariffs that went into effect in 2018 have led to not only higher producer prices but also a loss of jobs across the U.S. — particularly in manufacturing. A previous analysis also found that tariffs have cost the U.S. $42 billion so far.“In terms of manufacturing employment, rising input costs and retaliatory tariffs each contribute to the negative relationship, and the contribution from these channels more than offsets a small positive effect from import protection,” the new Fed study stated. “For producer prices, the relative increases associated with tariffs are due solely to the rising input cost channel. We find little evidence for a relationship between industrial production and any of the three tariff channels considered.”

President Donald Trump speaks to 5000 contractors at the Shell Chemicals Petrochemical Complex on August 13, 2019 in Monaca, Pennsylvania. (Photo: Jeff Swensen/Getty Images)‘You cannot simply raise tariffs’ Back in December 2018, Trump tweeted: “Almost 500,000 Manufacturing Jobs created since I won the Election. Remember when my opponents were saying that we couldn’t create this type of job anymore. Wrong, in fact these are among our best and most important jobs!”However, the tit-for-tat tariffs between the U.S. and China have thrown a wrench in his plans to revitalize the manufacturing sector.“While the longer-term effects of the tariffs may differ from those that we estimate here, the results indicate that the tariffs, thus far, have not led to increased activity in the U.S. manufacturing sector,” the Fed study stated.According to the study, the industries hardest hit by the retaliatory tariffs from China include producers of aluminum sheet, iron and steel, motor vehicles, household appliances, and computer and other electronic equipment.

Manufacturing is the industry hit hardest by the 2018 tariffs. (Photo: Federal Reserve)Doug Barry, senior director of communications and publications for the U.S.-China Business Council (USCBC), told Yahoo Finance that the findings came as no surprise. “They reflect what we have been hearing anecdotally for quite some time,” he said. “As the report authors note, in an era of globally interconnected supply chains, you cannot simply raise tariffs on imports to protect domestic manufacturing because a lot of those imports are actually intermediate goods that domestic manufacturers need.”The Fed study noted this as well and highlighted that the retaliatory tariffs from U.S. trading partners offset any positive gains that came from reduced competition. “These retaliatory tariffs may harm U.S. manufacturers by decreasing their competitiveness in foreign markets,” the Fed study said. According to the USCBC, exports to China support over 1.1 million American jobs. Factory workers have particularly bearing the brunt of the retaliatory tariffs from China — the October 2019 job report highlighted the contraction in total factory payrolls, “which not only increases price for companies but also causes investment uncertainty,” according to Bloomberg.

‘The consequences will be very bad’

Chris Rupkey, chief financial economist at MUFG, mostly shrugged off the Fed study findings, saying that it looks “increasingly like the U.S.-China trade war was all smoke and no fire.” However, he did note one issue that is still at play. “The biggest risk to the economy is the uncertainty caused by the confusion about how long the trade war might last,” he told Yahoo Finance. “Companies don’t tend to undertake new projects or expand their businesses during uncertain times and so investment spending that drives GDP can suffer.”According to the Tax Foundation, GDP has shrunk by 0.55% as a result of the trade war. But for now, “the coast is clear,” Rupkey said, because of the phase one trade deal.“The major hit to the economy was going to take place if the Trump administration went all in with 30% tariffs on $540 billion of goods that America imported from China in 2018,” he said. “That tariff tax would have braked economic growth hard from a 2% forecast in 2020 to just 1.1 or 1.2%.”Despite the first step towards a trade resolution, Barry is firm in his stance that trade relations between the U.S. and China need to resume for the good of the American economy.“People who advocate decoupling the U.S. and China economies should realize that the consequences will be very bad for U.S. businesses and workers,” Barry said. Adriana is an associate editor for Yahoo Finance. She can be reached at adriana@yahoofinance.com. Follow her on Twitter @adrianambells.

WASHINGTON (AP) — Charging that Iran was “fully responsible” for an attack on the U.S. Embassy in Iraq, President Donald Trump ordered about 750 U.S. soldiers deployed to the Middle East as about 3,000 more prepared for possible deployment in the next several days.

No U.S. casualties or evacuations were reported after the attack Tuesday by dozens of Iran-supported militiamen. U.S. Marines were sent from Kuwait to reinforce the compound.

Defense Secretary Mark Esper said Tuesday night that “in response to recent events” in Iraq, and at Trump’s direction, he authorized the immediate deployment of the infantry battalion from the Army’s 82nd Airborne Division at Fort Bragg, North Carolina. He did not specify the soldiers’ destination, but a U.S. official familiar with the decision said they will go to Kuwait.

“This deployment is an appropriate and precautionary action taken in response to increased threat levels against U.S. personnel and facilities, such as we witnessed in Baghdad today,” Esper said in a written statement.

Additional soldiers from the 82nd Airborne’s quick-deployment brigade, known officially as its Immediate Response Force, were prepared to deploy, Esper said. The U.S. official, who provided unreleased details on condition of anonymity, said the full brigade of about 4,000 soldiers may deploy.

The 750 soldiers deploying immediately were in addition to 14,000 U.S. troops who had deployed to the Gulf region since May in response to concerns about Iranian aggression, including its alleged sabotage of commercial shipping in the Persian Gulf. At the time of the attack the U.S. had about 5,200 troops in Iraq, mainly to train Iraqi forces and help them combat Islamic State extremists.

The breach of the U.S. Embassy compound in Baghdad on Tuesday was a stark demonstration that Iran can still strike at American interests despite Trump’s economic pressure campaign. It also revealed growing strains between Washington and Baghdad, raising questions about the future of the U.S. military mission there.

“They will pay a very BIG PRICE! This is not a Warning, it is a Threat. Happy New Year!” Trump tweeted Tuesday afternoon, though it was unclear whether his “threat” meant military retaliation. He thanked top Iraqi government leaders for their “rapid response upon request.”

Russian state media sounded a triumphal tone in the December 27th announcement that the first Avangards are now ready for launch, even specifying the exact hour of combat readiness for the nuclear-armed hypersonic glider.

“The Avangard strategic missile system has been put on combat duty at 10 a.m. today,” Defense Minister Sergei Shoigu told President Vladimir Putin. The weapon was deployed with a missile division in the Orenburg region 900 miles southeast of Moscow.

Avangard is a nuclear-armed boost-glide system. The glider is boosted high into the atmosphere atop a Sarmat ICBM, and then glides down to its target at what Russia claims is a speed of Mach 27. The weapon was spurred by Moscow’s fears that the U.S. missile defense program will eventually be capable of intercepting and destroying conventional Russian ICBMs, and thus encourage America to launch a first strike without fear of Russian nuclear retaliation. But while conventional ICBM warheads descend from space at Mach 20-plus, they follow predictable ballistic trajectories: a winged hypersonic glider can maneuver within the atmosphere to avoid interception.

Putin “has the Avangard’s ability to evade U.S. missile defense systems,” noted the Moscow Times. “Russia said it showed the missile system to U.S. inspectors last month as part of a bilateral arms control treaty ahead of its deployment.”

“Officials say the ICBM flies 27 times faster than the speed of sound. During the last known tests that took place in December 2018, the Avangard hit a practice target 6,000 kilometers [3,728 miles] away.”

Putin recently claimed that “this weapon of the future can penetrate both existing and any future missile defense systems.” Other Russian hypersonic weapons include the nuclear-armed Khinzal air-launched missile, and the Zircon anti-ship missile.

Interestingly, Putin also described Russia being the first nation to deploy hypersonic missiles as being “a unique situation in our contemporary history where they’re trying to catch up.” Which suggests that Putin considers it the norm for Russia to be trying to catch up in the arms race.