Damaging storms to rip through southeastern US into Thursday night

Forecasters are putting a corridor from the Carolinas to Florida on alert for severe thunderstorms that may spawn tornadoes into Thursday night.

Thunderstorms with a history of producing damage and tornadoes in Mississippi and Alabama on Wednesday night will charge eastward throughout the day on Thursday into the first half of Thursday night.

Damaging straight-line winds may become the primary threat from the thunderstorm activity as the storms congeal into an intense squall line, according to AccuWeather Meteorologist Brandon Buckingham said. These winds can reach an AccuWeather Local StormMax™ of 80 mph, leading to knocked down trees and power lines and power outages.

AccuWeather meteorologists are concerned that tornadoes can spin up at any time along the violent line of storms, with flooding downpours also possible.

The worst of the storms will swing through Atlanta, Macon and Albany, Georgia; Pensacola, Panama City and Tallahassee, Florida; Greenville, South Carolina; and Charlotte, North Carolina, during the day Thursday.

By Thursday night, the severe weather will target the southern Atlantic Seaboard from the Outer Banks of North Carolina to Jacksonville, Florida.

The storms are likely to still pack a punch with downpours and damaging winds by the time they reach Orlando and Tampa, Florida, later Thursday night.

People across the area at risk for severe weather are encouraged to keep up-to-date with the latest watches and warnings for their location. Seek shelter inside a sturdy building away from windows should severe thunderstorms threaten.

The storms are likely to cause travel headaches for people flying into and out of Atlanta with delays likely throughout Thursday.

Motorists on stretches of interstates 10, 20, 59, 75, 85 and 95 will need to slow down in the heaviest downpours in order to lessen the risk of hydroplaning. Secondary roadways that are flooded should be avoided. 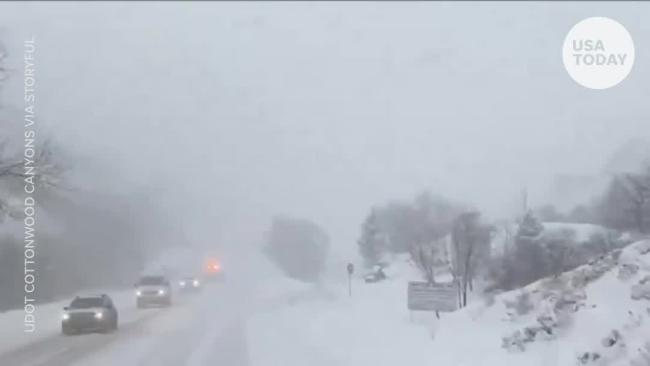 A powerful winter storm that dropped 2 inches of snow on El Paso along the Texas border began a 1,500-mile trek across the nation’s heartland Wednesday, threatening heavy snow for Oklahoma City, Detroit and Chicago.

Snow was pushing into Illinois, Michigan and other parts of the Midwest on Wednesday, and it is expected to continue Thursday before reaching the Northeast by Friday, the National Weather Service said.

To the south, ahead of the storm, a deep surge of moisture from the Gulf of Mexico is expected to trigger heavy rain and severe thunderstorms, including possible tornadoes, from Louisiana to Virginia.

Portions of eastern Louisiana and most of Mississippi and Alabama faced the threat of severe thunderstorms, heavy rain and isolated tornadoes through Wednesday evening.

Early Wednesday afternoon, the weather service posted a tornado watch across much of Louisiana and Mississippi.

AccuWeather said a line of powerful thunderstorms is expected to push across the Deep South to the Atlantic Coast by Thursday night. The thunderstorms are likely to hit major cities such as Charleston, South Carolina; Savannah, Georgia; and Jacksonville, Florida, at night.

As the storm moved east out of the Southern Plains, it was expected to slam northwestern Texas with 4 to 8 inches of snow through Wednesday evening. Oklahoma City schools canceled classes as the city was hit with 4.5 inches of snow Wednesday morning, almost doubling the previous record for Feb. 5.

“The biggest impact has been snarled traffic from jack-knifed semis,” Stewart said.

Peacock, Texas, about 90 miles south-southeast of Lubbock, measured up to 10 inches of snow, The Weather Channel reported, while Big Spring, Texas, experienced „thundersnow,” an unusual scenario in which a thunderstorm produces snow instead of rain.

The winter storm caused a multi-vehicle pileup Wednesday on an Interstate 70 bridge in central Missouri but mostly missed a parade to celebrate the Kansas City Chiefs’ Super Bowl win.

In Arkansas, forecasters said up to a quarter-inch of ice and 1 to 3 inches of snow were possible in the northwest part of the state while the rest of the state could expect heavy rain on Wednesday. 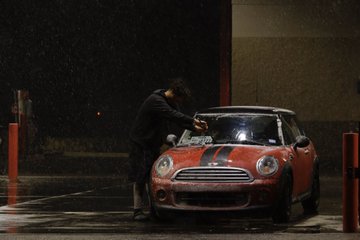 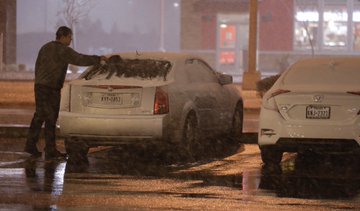 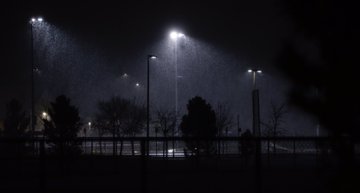 15 people are talking about this

Some freezing rain is likely across parts of the Ohio Valley and into interior portions of the Northeast through Thursday night, according to the weather service.

After a spate of milder temperatures, much of Connecticut, Rhode Island and Massachusetts were under a winter weather advisory calling for ice and up to 2 inches of snow.

AccuWeather said the storm could make morning and afternoon commutes on Thursday around Chicago and Detroit slow and slippery.

Australia receives bushfire reprieve with floods, battens down for cyclone

A car is driven through a bushfire affected area on the Bruthen-Buchan Road near Buchan in Victoria, Australia

SYDNEY/MELBOURNE (Reuters) – Many Australians were experiencing a bittersweet break from the threat of bushfires on Thursday, with flooding rains deluging some parts of the eastern states and miners preparing for a tropical cyclone to hit the country’s iron ore heartland over the weekend.

The Bureau of Meteorology (BOM) issued severe thunderstorm warnings for the southeast of Queensland state and a flood alert for more than 20 areas in New South Wales (NSW) after the start of heavy rainfall that is expected to continue for several days.

„We are expecting those larger totals and heavier rainfall to come into the northeast coast of NSW and then sort of track slowly southwards,” he said.

Cricket Australia said a bushfire fundraising match which was set to be played in Sydney on Saturday had to be rescheduled for Melbourne on Sunday because of the rain.

Miners Rio Tinto and BHP Group said they were monitoring the situation and making preparations ahead of Saturday, when a tropical low off the coast of Western Australia is forecast to develop into a category three cyclone that was set to make landfall in the Pilbara area.

„With strong winds and heavy seas predicted, both Port Walcott (Cape Lambert) and Dampier ports are being cleared, as this impacts the ability to safely moor vessels,” Rio said.

„We have also started the process of demobilising non-essential people from our sites which may be affected by the weather system,” it said in a statement.

The wet weather has helped douse or slow some of the country’s most damaging and long-running wildfires, which have burned through more than 11.7 million hectares (2.8 million acres) of land since September. The prolonged bushfire season has killed 33 people and an estimated 1 billion native animals. More than 2,500 homes have been destroyed.

Officials, however, have warned the threat was not yet over and that there will likely be weeks more of firefighting ahead.

Around 60 fires were still burning across NSW and Victoria, the country’s most populous states, with around half of those classified as uncontained.

(Reporting by Paulina Duran in Sydney and Melanie Burton in MELBOURNE; Editing by Jane Wardell and Lincoln Feast)

The first avalanche in the Van province, which borders Iran, occurred Tuesday evening, killing five people. In the aftermath, more than 100 rescue workers were reportedly sent to rescue two people still believed to be buried. The second avalanche came down Wednesday during the search, burying rescue teams and killing several members.

The disaster comes less than two weeks after Elazig province, another region in eastern Turkey, was struck by a 6.7-magnitude earthquake which resulted in at least 36 deaths and thousands of injuries.