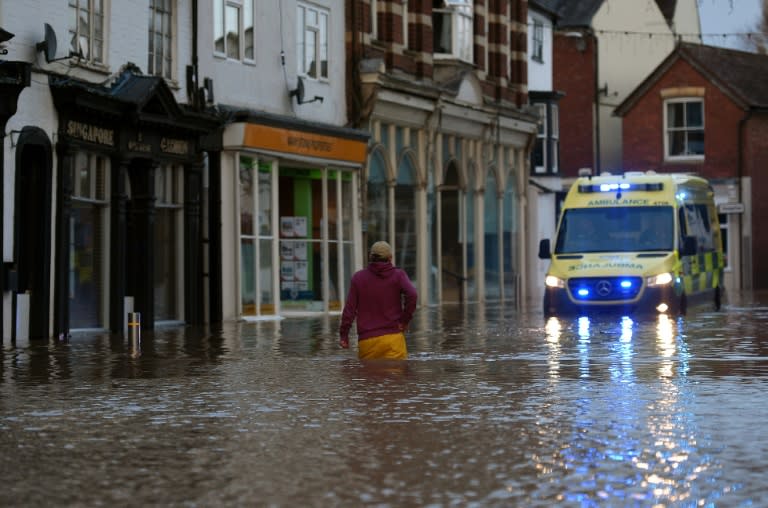 The man fell into the River Tawe, in south Wales, police said.

The storm also battered much of France, with some 60,000 people suffering power cuts in the northwest of the country and rail traffic disrupted.

Britain’s government weather agency issued a rare red warning for south Wales, saying there was a risk of „significant impacts from flooding” that included a „danger to life from fast flowing water, extensive flooding to property and road closures”.

Police said in a tweet the man who fell into the river was later found dead „further along the river in the Tebanos area”.

A record 594 flood warnings and alerts were in place on Sunday, extending from Scotland’s River Tweed to Cornwall in southwest England.

Winds of over 90 miles (150 kilometres) per hour were recorded in Aberdaron, south Wales.

Pictures circulated on social media showed the nearby River Taff bursting its banks, while rescue workers rushed to get people trapped in their homes in Powys to safety.

„The forecast is for very significant levels of rain, especially in the eastern valleys of south Wales,” said Jeremy Parr, from government body Natural Resources Wales.

„Impacts could be severe overnight, and everyone should take the warnings extremely seriously,” he added.

„Some communities have been cut off… but emergency service workers are working tirelessly to put measures in place to ensure the safety of residents,” south Wales police said in a statement.

Roads and railways were badly affected by the downpours and winds, having barely recovered from a similar storm last week.

„Our armed forces are always ready to support local authorities and communities whenever they need it,” said defence minister Ben Wallace.

British Airways and easyJet confirmed they had grounded flights, with footage posted online showing a massive Airbus A380 jet being blown about as it attempted to land.

Earlier, two bodies were pulled from rough seas off the south England coast on Saturday as the storm barrelled in.

One of the men is assumed to have been the subject of a search triggered when an LPG tanker reported that one of its crew was unaccounted for.

France was also affected by the storm, especially northwestern Brittany where the Finistere and Morbihan regions were temporarily placed on orange alert for rain and flooding, according to the national weather service, Meteo-France.

The storm interrupted two high-speed TGV train services, one stopped by a fallen tree and the other by a power failure, the national rail company SNCF said.

By Sunday evening, Meteo-France said the worst seemed to have passed as winds dropped to below 100 kph.

„Winds will be increasing throughout the day on Sunday across Germany, Denmark and southern Sweden,” AccuWeather Meteorologist Maura Kelly said earlier Sunday.

A man has died after falling into a river in south Wales amid severe weather conditions generated by Storm Dennis.

Dyfed-Powys Police said the man fell into the River Tawe at Ystradgynlais on Sunday morning at around 10am. His body was later found downstream in the Trebanos area.

In a statement released on Twitter, Ystradgynlais Police said: “A male has fallen into the river at Ystradgynlais at approximately 10am this morning and has sadly be found deceased further along the river in the Tebanos area.

“If you witnessed this incident please can you give us a call on 101.”

Most of Wales has been hit hard by Storm Dennis, with the situation said to be “life-threatening” in the south, where the Met Office issued a red warning due to heavy rainfall and flooding risk until 11am.

Homes, roads and railways have been left flooded following torrential downpours and high winds, with recovery efforts underway to help those affected.

Communities in the worst affected areas, including Rhondda Cynon Taff, Merthyr, Abergavenny and Neath Port Talbot, have had to be evacuated.

The Met Office said that winds of more than 80mph have been recorded across parts of the UK, with the highest measuring 91mph in Aberdaron in north Wales on Saturday.

A total of 156.2mm of rain fell at Crai Reservoir in Powys in the 48 hours from Friday to Sunday morning, it added.

Severe flood warning have been issued for the rivers Neath and Taff in south Wales, as well as the River Teme.

Pictures on social media show the Taff bursting its banks and flooding parts of Pontypridd, while rescue workers were using boats to get families to safety after further flooding in nearby Nantgarw.

The Environment Agency’s (EA) flood and coastal risk management executive director John Curtin said on Sunday that a record number of flood warnings and alerts had been issued, with more than 600 in place across England.

Mr Curtin tweeted: “Breaking: we now have the most flood warnings and alerts in force (594) in England than any other day on record.”

The Met Office has issued amber alerts, meaning people must be prepared to change plans and protect themselves and their family from the storm, for parts of Yorkshire, Wales, Devon, East Sussex and Kent.

Rail services were suspended across south Wales after tracks were submerged by rain, while the line between Derby and Long Eaton was also closed.

Flooding saw the M54 westbound closed at Telford, along with the A616 around Stocksbridge in South Yorkshire and the A52 between Stragglethorpe and Gamston in the East Midlands, Highways England said.

Relief from Storm Dennis is still some distance away, the Met Office’s Mr Dewhurst said, adding that “heavy rain and strong winds” would continue across large parts of the UK on Sunday.

“South Wales will see a lot of rain fall before Dennis moves north later to Scotland and Northern Ireland.”

The British Red Cross said that with water levels expected to peak on Monday or Tuesday it was ready to respond across the country.

Flights in and out of the UK have also been grounded for safety reasons, with British Airways and easyJet both confirming cancellations.

Two bodies were pulled from rough seas on Saturday, before the worst of the storm hit.

One man was found following a huge search operation off Margate after an early-morning distress call, while another was found at Herne Bay.

A plane has pulled off an extraordinary landing at Heathrow Airport, after contending with powerful headwinds brought by Storm Dennis.

Footage shows the pilot’s skilful manoeuvre, as the Etihad Airbus A380 aircraft hovered sideways over the runway before successfully landing on Saturday.

The incident came as hundreds of flights into and out of the UK were grounded on Saturday because of Storm Dennis, with easyJet cancelling more than 230 flights.

The storm, the second to hit the UK in as many weeks, has unleashed strong winds and heavy rain over the weekend.

In some parts of the UK, more than a month’s rain has fallen in just two days, causing the Environment Agency (EA) to issue a record number of flood warnings and alerts for England.

John Curtin, the EA’s flood and coastal risk management executive director, said on Sunday that the 594 warnings and alerts in place were a record.

Parts of Wales saw more than a month’s rainfall in 48 hours from Friday to Sunday morning.

The Met Office said that 156.2mm of rain had fallen over this period at Crai Reservoir in Powys, Wales, well above Wales’ average monthly rainfall of 111.1mm in February.

The village of Nantgarw, Rhondda Cynon Taff, near Cardiff, is among the worst effected in the UK.

Paul Mason, group manager of South Wales Fire and Rescue Service, said he had never experienced anything as bad in his 31 years in the service.

Mr Mason said the weather was “unprecedented,” adding he had “never experienced anything like this before.”

Georgie Timmins, crisis response officer at the British Red Cross, said: „The storms are expected to continue, and water is anticipated to be at peak levels on Monday and Tuesday. It is important people are ready should the worst happen.”

The Met Office issued a severe weather warning for Wales as Storm Dennis unleashed torrential rain over the UK.

One man died after being pulled from the River Tawe near Swansea but police said it was not related to the weather.

The Environment Agency said that a record number of flood alerts were in force on Sunday, including severe warnings for the River Teme in mid Wales.

Storm Dennis hammered Britain Sunday, bringing a month’s worth of rain in just 48 hours to parts of South Wales, which bore the brunt of the country’s second severe storm inside a week.