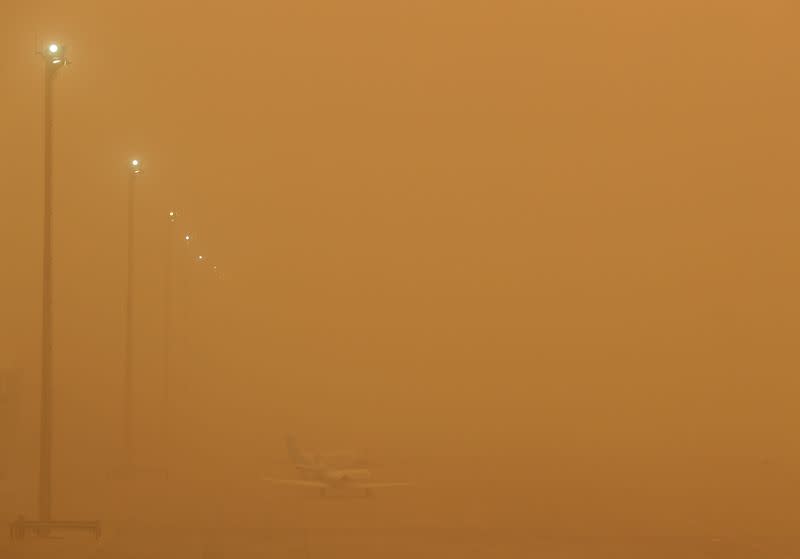 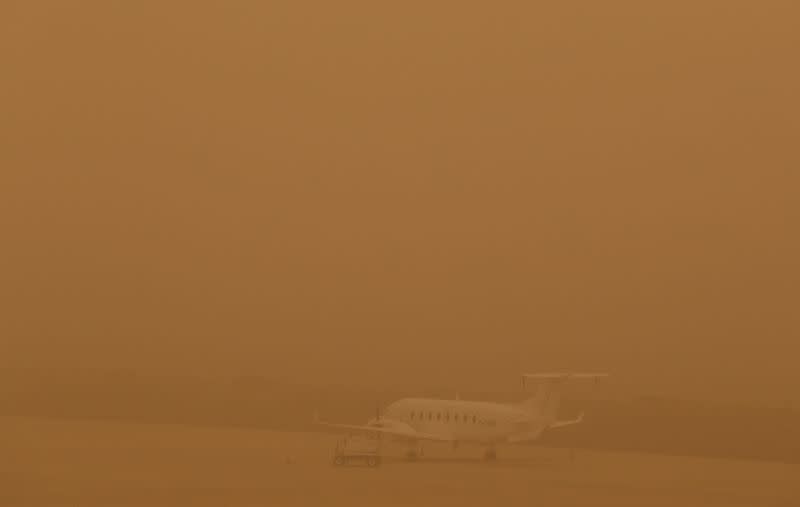 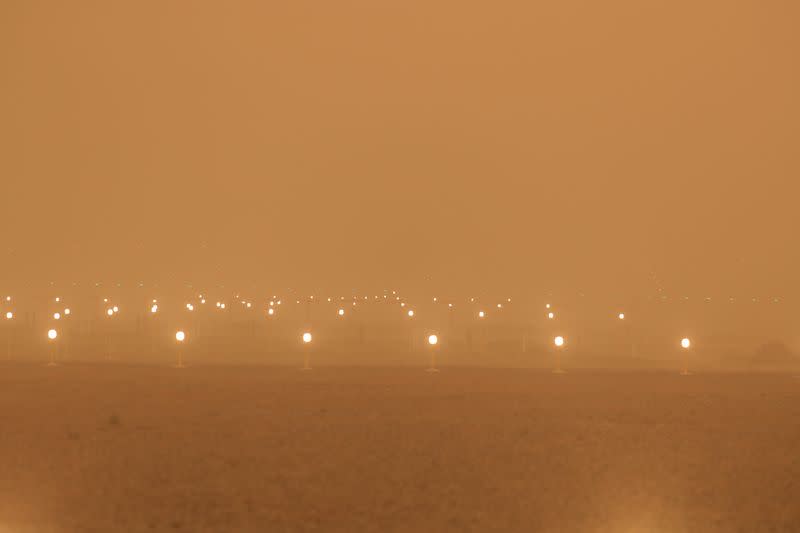 Planes are seen parked on the tarmac during a sandstorm blown over from North Africa known as „calima” at Las Palmas Airport By Borja Suarez GRAN CANARIA, Spain (Reuters) – Spain’s airport operator AENA suspended all flights in and out of Gran Canaria and all flights leaving Tenerife on Saturday evening after a storm carrying clouds of red sand from the Sahara hit the Canaries and severely reduced visibility.At least 19 flights to Gran Canaria were diverted, a spokeswoman for AENA said. She did not specify which airlines had been affected.Budget carrier Vueling, a subsidiary of IAG, said some of its services had been hit and advised passengers to check the status of their flights before heading to the airport.Spain’s national weather service warned that winds of up to 120 kph (75 mph) are set to buffet the Canaries until Monday. Gran Canaria, Fuerteventura and Lanzarote are likely to be the worst hit, the weather service said.The regional government declared a state of alert and advised people to keep doors and windows closed across the archipelago, while authorities in Lanzarote’s capital Arrecife, cancelled all outdoor activities, including some carnival celebrations. Located around 60 miles off the coast of Morocco, the Canaries are a popular tourist destination for northern Europeans in search of winter sun.(Reporting by Nathan Allen in Madrid and Borja Suarez in Gran Canaria; editing by James Drummond)

Following a drier stretch in the Northwest, another storm is poised to bring rain and snow to the region before the end of the month.

After spotty wet weather started off the weekend, a more potent storm is set to move in on Saturday night.

After midnight, the storm will bring wet weather into the western parts of Washington, before expanding south and east through Sunday morning.

Areas west of the Cascades in both Washington and Oregon will remain mostly rain, including cities such as Portland, Oregon, and Seattle.

Rainfall amounts will range from 0.25-0.50 of an inch, with isolated amounts as high as 1.5 inches of rain.

However, some colder air across interior parts of the Northwest will create more wintry precipitation from the Cascades on east.

The steadiest and heaviest snow will be reserved for the Cascades and will persist through Sunday and into early Monday,

„In the Cascades, snow levels will drop as the storm becomes stronger, getting down to around 2,000-2,500 feet across northern Washington,” said AccuWeather Meteorologist Brett Edwards.

Snowqualmie Pass, at just over 3,000 feet, will likely start as a mix of rain and snow before transitioning to all snow by midday on Sunday.

In Oregon, snow levels will drop to around 3,500 feet in northern Oregon and around 4,500 feet farther south in the Cascades. Several inches of snow are likely at Santiam Pass and Willamette Pass, which could make for difficult traveling conditions along US 20 and state road 58.

In the highest elevations, 1-2 feet of snow is likely.

Several inches of snow will also pile up in the northern Rockies of Idaho and Montana. The storm will arrive in this region Sunday afternoon and linger through the day on Monday.

In addition to the rain and snow, windy conditions are expected with this storm. Widespread wind gusts of 25-35 mph are expected, with gusts as high as 50 mph in the higher elevations.

Even as the precipitation lessens across the region Sunday night, some areas may remain breezy through the first half of the day on Monday.

This storm will break the stretch of dry weather the Northwest has enjoyed recently.

Seattle recorded 12.5 inches of rain from the start of 2020 through Feb. 12, a whopping 175 percent of the normal rainfall during that time of the year. Since then, the wet weather has tapered off, only adding another 0.25 of an inch in the following week.

Many other locations across the Northwest also had near- or above-normal rainfall so far this year, following flooding in parts of Oregon in January.

Following this early-week storm, the Northwest will have the opportunity to dry out yet again, lessening the threat of flooding to return. The middle and end of next week look fairly dry in the western half of the country.

Ara Zobayan, the pilot of the helicopter that crashed into a California hillside, killing retired NBA star Kobe Bryant, himself, and seven others, was disciplined for violating weather-related flight rules in 2015, according to records from the Federal Aviation Administration obtained by the Los Angeles Times.

The records obtained through the Freedom of Information Act report that Zobayan was counseled by an FAA investigator when he broke the federal flight rules when he flew into busy airspace near Los Angeles International Airport on May 11, 2015, despite being ordered not to by air traffic control.

Zobayan was flying northbound in an AS350 chopper near the Hawthorne Airport and the 105 Freeway when he tried to get clearance to fly through the LAX airspace, according to the Los Angeles Times, but the tower told him that the airfield was reporting a cloud ceiling at least 1,000 feet above the ground and less than three miles of visibility.

Zobayan requested to continue under special Visual Flight Rules (VFR), which would grant him clearance to fly in weather conditions with less than the minimum visibility for regular visual flying, however when the tower denied his request, Zobayan backtracked and said that he could actually maintain VFR, according to the Los Angeles Times.

Zobayan entered the airspace without approval, violating FAA rules, according to the report.

„You can’t request special VFR and then they deny you and you say, ‘Oh wait a minute, actually I’m VFR’,” Kurt Deetz, a former pilot for Island Express Helicopters told the Los Angeles Times.

Deetz went on to tell the Los Angeles Times that navigating around the controlled airspace near LAX would have added only five to ten minutes to the flight.

On the day Zobayan violated VFR, it was partly to mostly cloudy through the day, with winds up to 17 mph in the afternoon, according to the Los Angeles International Airport weather data.

This news comes a few days before the Kobe’s and Gianna’s memorial on Feb. 24, 2020, a date that references both of their jersey numbers.

What’s in a name?

With Saturday marking 100 days until hurricane season starts, here’s the list of tropical cyclone names for the Atlantic Ocean in 2020:

The Myrtle Beach area saw limited effects from Hurricane Dorian last year, while Hurricane Florence in 2018, like Hurricane Matthew in 2016, caused some damage and destructive flooding.

The beginning of hurricane season is June 1. The most reputable sources generally don’t put out their yearly hurricane forecasts until later in the spring.

According to the National Oceanic and Atmospheric Administration (NOAA), the National Hurricane Center has named tropical cyclones in the Atlantic since 1954. There are six lists of names that are recycled every six years, with names being removed only if storms are so deadly or catastrophic that their inclusion would be deemed insensitive, the NOAA’s website states.

If more than 21 storms formulate in a season, any additional storms would be given names from the Greek alphabet, according to the NOAA.