Indonesia’s weather agency linked the rains to tropical cyclones in Australia and in the Indian ocean that had caused bad weather across the islands of Java, Bali and Nusa Tenggara. The agency also warned of high waves in the seas south of Java.

Flooding was particularly severe in the Bekasi area west of the capital, though big swathes of the low-lying city were also badly affected.

Jakarta police, via its Instagram account, warned of road closures due to flooding and train services also suffered major disruption.

Videos and photos posted by Jakarta police showed flooded street in an industrial area in East Jakarta with lines of halted trucks and scores of motorcycles.

Indonesian state electricity utility Perusahaan Listrik Negara (PLN) said in a statement that electricity was shut off to 326 substations to ensure safety.

Jakarta is prone to flooding and at the start of the year the city suffered some of the heaviest rains since records begun, causing floods that killed more than 60 people and displaced around 175,000 people.

About a fifth of snow on one of Antarctica’s islands has vanished due to a recent heat wave.

Record-breaking warm temperatures the continent experienced from Feb. 5 to Feb. 13 managed to melt 20 percent of snow on Eagle Island — an island located on the northwestern peninsula of Antarctica — in a matter of days, according to the NASA Earth Observatory.

Mauri Pelto, a glaciologist at Nichols College, told NASA’s publishing outlet that four inches of Eagle Island’s snowpack thawed away following an warm spell earlier this month, exposing much of the land beneath the island’s ice cap and creating pools of meltwater on its surface.

“I haven’t seen melt ponds develop this quickly in Antarctica,” said Pelto. “You see these kinds of melt events in Alaska and Greenland, but not usually in Antarctica.”

Argentina has been tracking temperatures from Esperanza since 1961, while records from Marambio date back to 1971.

The Antarctic Peninsula — the northwest tip near South America where the two Argentinian bases are located — is among the fastest warming areas in in the world, rising almost 37.4 degrees Fahrenheit (20.78 degrees Celsius) over the last 50 years, according to the World Meteorological Organization (WMO).

The amount of ice lost annually from the Antarctic ice sheet have also increased at least six-fold between 1979 and 2017, the organization said.

Scientists determined 2019 was the second-hottest year on record in separate but similar reports by the National Oceanic Atmospheric Administration (NOAA)’s National Centers for Environmental Information (NCEI) and NASA released in January.

The records, which scientists began compiling in 1880, show that the last five years have been the planet’s warmest, with 2016 currently topping the list by just 0.07 of a degree Fahrenheit.

The years 2017, 2015 and 2018 followed closely behind in third, fourth and fifth place, respectively, NOAA reported.

Researchers were able to conclude that the average temperature across Earth in 2019 was 1.71 degrees Fahrenheit above the 20th-century average, making it the 43rd consecutive year where the land and water temperatures were above average, according to NOAA.

A winter storm will bring snow to portions of the Plains, Midwest and Northeast this week, likely disrupting travel and closing schools.

A swath of heavy snowfall is likely across the Midwest into the lower to central Great Lakes on Tuesday and Wednesday, the National Weather Service said. Snowfall accumulations in these areas may range from 6 to 12 inches; some locally higher totals are possible.

Several inches of snow is forecast to coat Chicago and Milwaukee, where significant travel impacts are possible starting Tuesday, the Weather Channel said.

News and weather happen, even at night: The Evening Briefing newsletter brings the news straight to you and your inbox

Chicago has the potential to receive its biggest single snowstorm of the season with this storm, AccuWeather warned, where at least 6 inches is possible, likely more. The Windy City’s biggest snowstorm this winter was Feb. 12-13, when 3.5 inches was reported.

Millions will be receiving snow beginning this evening, with areas like Chicago potentially getting their biggest snowfall of the season. This same system is also further saturating the South. 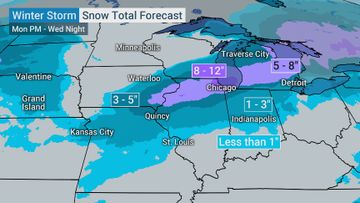 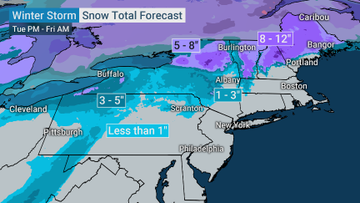 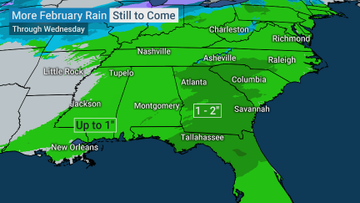 57 people are talking about this

Gusty winds will likely produce blowing and drifting snow in the Chicago area on Wednesday, the weather service said.

Snow will also spread from the Ohio Valley to New England from Wednesday through Thursday. Some of the heaviest snow is likely in northern New England, where up to a foot is possible.

As has been the case for practically the entire winter, the I-95 corridor of the Northeast will again miss out on the snow. Rain is forecast instead. „Areas where it (snowfall) is very unlikely,” AccuWeather meteorologist Bernie Rayno said, „is where we’ve seen a snow drought all winter: Boston, New York City, Philadelphia, and Washington, D.C.”

A strengthening storm is expected to dump snow on interior portions of the Northeast, setting up lake-effect snow that will continue even after the storm departs. https://bit.ly/2urad1R 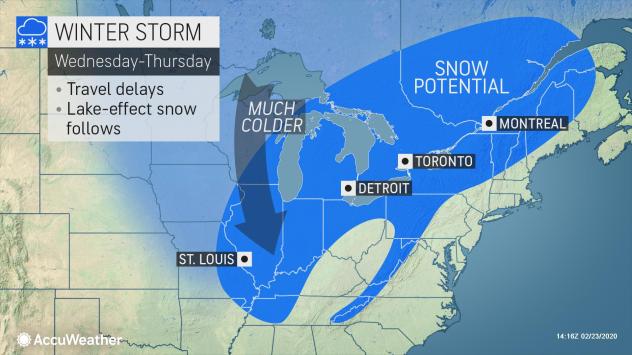 In the Midwest and interior Northeast, however, lake-effect snow will follow the main storm later in the week.

„Even after the storm is over, another wave of Arctic air will follow and generate lake-effect snow as it rushes across the Great Lakes,” AccuWeather meteorologist Courtney Travis said.

Accumulating snow downwind of Lake Michigan and Lake Superior may linger as late as Saturday before tapering off, AccuWeather said.

Following a stretch of springlike conditions across the eastern United States through midweek, a cold front sweeping through the region will usher in a more typical winterlike air mass late week and into the weekend: https://bit.ly/2Vjp7lQ 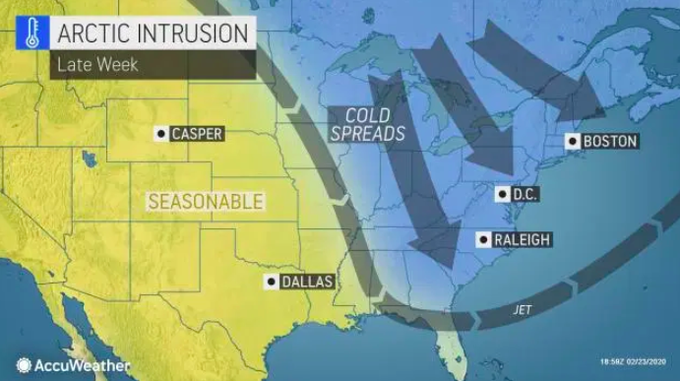 Last year, 117 of the 200 most polluted cities in the world were in China

Last year, 117 of the 200 most polluted cities in the world were in China (AFP Photo/WANG ZHAO)

Nearly 90 percent of the 200 cities beset by the world’s highest levels of deadly micro-pollution are in China and India, with most of the rest in Pakistan and Indonesia, researchers reported Tuesday.

Taking population into account, Bangladesh emerged as the country with the worst so-called PM2.5 pollution, followed by Pakistan, Mongolia, Afghanistan and India, according to the 2019 World Air Quality Report, jointly released by IQAir Group and Greenpeace.

Particulate matter of 2.5 microns or less in diameter — roughly 1/30 the width of a human hair — is the most dangerous type of airborne pollution.

Microscopic flecks are small enough to enter the bloodstream via the respiratory system, leading to asthma, lung cancer and heart disease.

Among the world’s megacities of 10 million or more people, the most PM2.5-toxic in 2019 was the Indian capital New Delhi, followed by Lahore in Pakistan, Dhaka in Bangladesh, Kolkata in India, Linyi and Tianjin in China, and Jakarta, Indonesia.

Next on the list were Wuhan — epicentre of the new coronavirus outbreak — along with Chengdu and Beijing.

The IQAir report is based on data from nearly 5,000 cities worldwide.

Most of the seven million premature deaths attributed by the World Health Organization (WHO) to air pollution are caused by PM2.5 particles, which originate in sandstorms, agriculture, industry, wildfires and especially the burning of fossil fuels.