by John Roach,AccuWeather•May 2, 2020
April was an historic month for tornadoes in the United States, as reflected in the tragic monthly data released by the National Weather Service’s Storm Prediction Center (SPC) Friday.There were 14 events defined as „killer tornadoes” by the SPC in April. That’s the fifth-most ever recorded by the National Oceanic and Atmospheric Administration (NOAA) and the most since 43 occurred in April of 2011.The 14 killer tornadoes in April were more than occurred in all of 2019 (12). In fact, there haven’t been more killer tornadoes than April’s 14 in any single year since 2012 (22).Also, the 40 fatalities in April is the most in any month since May of 2013. Three two-day events in April resulted in the following death tolls: April 12-13 (32 deaths); April 19-20 (2); April 22-23 (6).

Easter Sunday (April 12) saw the most tornado-related fatalities in one day (32) since March 2, 2012 (41). The deaths occurred in Mississippi (12), South Carolina (9), Georgia (8) and Tennessee (3).The preliminary count of 351 tornadoes in the month was the second-most of any April, according to SPC records, topped only by April 2011 (1,085).Only once in the last three years has any month surpassed April’s preliminary total of 351 tornadoes. That was the record-setting month of May 2019, when 506 tornadoes struck throughout the U.S.April’s total is 41 percent more than the three-year average for April tornadoes of 205. And April’s 351 tornadoes is almost 50 percent higher than the average of 178 from 1991-2015, according to SPC records.

A total of 583 tornadoes have occurred so far in 2020, according to the SPC’s preliminary reports. The three-year average is 427, meaning there have been 26 percent more tornadoes this year. However, 2020 so far is 45 percent higher than the four-month average of 321 from 1991-2015.For all of 2020, AccuWeather predicts a normal to slightly above-normal number of tornadoes, with a range of 1,350 to 1,450. That range would cover what occurred in 2019 (1,422) and is 5 to 15 percent more than the United States annual average (between 1,253 and 1,297 tornadoes occur annually in the U.S.).Although tornadoes can occur at any time, the U.S. tornado season typically runs from March through November or sometimes into early December. Tornadoes cause an average of 80 U.S. fatalities annually, and tornadoes and their destruction killed a total of 41 people in 2019.The current average number of U.S. tornadoes per year based on long-term data is lower than what actually occurs each year. That’s because the number of tornadoes reported annually has been rising over the past few decades mainly because more are reported as the U.S. population has risen and more people have access to mobile devices and cameras. Many tornadoes of the past were not seen or recorded; this change may amount to an increase of reported tornadoes of up to 20 percent over the last 40 years and 10 percent over the past 20 years.Keep checking back on AccuWeather.com and stay tuned to the AccuWeather Network on DirecTV, Frontier and Verizon Fios

Following a brief cooling trend along the California coast this past week, meteorologists expect temperatures to throttle back to summer levels once again during the first full week of May.

A heat wave gripped much of California last weekend, and thousands of people crowded popular beaches despite warnings from officials to maintain social distancing measures amid the coronavirus pandemic. Gov. Gavin Newsom has since closed beaches indefinitely, warning that the virus doesn’t stop for the weekend.

The core of the heat has since shifted well inland over the United States and will focus from the southern Rockies to the southern and central Plains this weekend.

A disturbance pushing across the interior Southwest this weekend will bring continued cooler conditions to the region as it produces gusty winds over the mountains and through the passes and some of the canyons. The cooling effects of the system will be fleeting, however.

The next surge of warmth on the coast and buildup of heat across the interior of California will begin next week and peak during the middle to latter days of the week.

Around May 5 (Cinco de Mayo), normal high temperatures around California typically range from 60 around Lake Tahoe, to the upper 60s in San Francisco and San Diego, the mid-70s in Downtown Los Angeles, the upper 70s in Sacramento and near 90 in Palm Springs. Like much of the nation during May, normal temperatures trend upward by a degree every two to four days over most of California.

Even though winds are not likely to be very strong, just enough of an offshore flow is forecast to push warmth from the interior West toward the Pacific coast.

„The marine layer will be minimal and any sea breeze along the coast rather weak,” Anderson said, explaining how heat will spread all the way to coastal areas. The marine layer is a flow of cool, moist air from the Pacific Ocean, which often penetrates a few dozen miles inland and is most pronounced during the late spring and early summer.

Around the Los Angeles basin, high temperatures will trend upward from the 70s this weekend to within a few degrees of 90 during Tuesday, Wednesday and Thursday.

Even San Diego can expect highs to trend upward from the lower 70s this weekend to the lower 80s later next week.

Highs in Palm Springs are forecast to swell from the upper 90s this weekend to perhaps just shy of the 110-degree mark by midweek. Palm Springs had a high of 100 or higher for eight consecutive days in a row from April 23-30.

Farther north, across the Sacramento Valley, temperatures will trend upward as well with highs to be mainly in the 80s during the middle to latter part of the week. Along the Northern California coast, San Francisco is likely to peak in the lower 70s for a couple of days.

Dry conditions will accompany the hot spell across the Golden State. Californians know that dry weather is no stranger to May. The month marks the time of the year when storms tend to wane across the state, and this month could bring practically no precipitation to the central and southern parts of the state.

„There are no signs of any storms dropping in with meaningful precipitation across central and southern portions of California for at least the next couple of weeks and perhaps the entire month,” AccuWeather Long-Range Meteorologist Tyler Roys said.

There will be some storm systems over the northern Pacific Ocean, and some of the tail ends of those storms can brush Washington, Oregon and perhaps the northern part of Northern California, but not likely locations farther to the south.

The latest report from the U.S. Drought Monitor does not indicate any drought or abnormally dry conditions across Southern California, but Central California is in the grips of a moderate drought with the most serious drought over the northern part of the state. More plentiful storms targeted the Southland, whereas significant storms bypassed areas farther to the north during the latter part of the winter.

„There may be enough of an offshore breeze, combined with the sunshine, heat and low humidity to elevate the wildfire danger this weekend,” Anderson said, adding that the dry and drought conditions have added to the danger by drying out vegetation and creating fuel. Meteorologists warn that people working outdoors with power equipment should exercise caution since wildfires could quickly ignite and spread under the forecast conditions.

Anderson said that those spending time outdoors should also apply sunscreen, wear sunglasses and have a means to keep hydrated.

For those seeking heat relief near streams with the beaches closed, there are other dangers to be aware of and take precautions against. The surging temperatures can accelerate the spring thaw in the mountains causing streams to run fast and furious. Water temperatures will be only a few degrees above freezing, which is cold enough to lead to dangerous cold water shock should anyone fall in or get swept away by raging waters.

A few locations in Europe were deluged with an entire season’s worth of rainfall in April that will not only shape the end of spring but could also influence the forecast going into the summer.

Some Europe cities, like Dublin, Rome and Berlin, were missed by multiple storms during April, leading to a drier-than-normal month. However, the stormy pattern that set up over the Iberian Peninsula produced wetter-than-normal conditions.

„A total of 263 mm (10.35 inches) of rain fell in Barcelona, well over the normal amount for the month of April,” said AccuWeather Meteorologist Tyler Roys.

This was the final image from my recent video https://youtu.be/mQ4mRUgiwhc

Shot from my balcony in El Campello Spain during Lockdown in April 2020. Dark clouds and falling rain out to sea with part of one of the breakwaters off Playa Carrer La Mar in the foreground. #elcampello 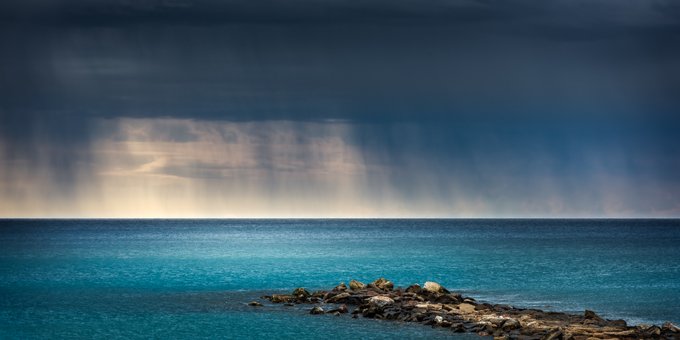 This year’s rainfall in April not only ended up being an astonishing 600 percent of normal, but it is also more rain than the city of Barcelona gets during the entire meteorological spring (March 1 – May 31).

Instances of flooding were reported all over northeastern Spain, several times throughout the month of April.

The rounds of wet weather also kept those social distancing during the COVID-19 pandemic from taking a walk outdoors. 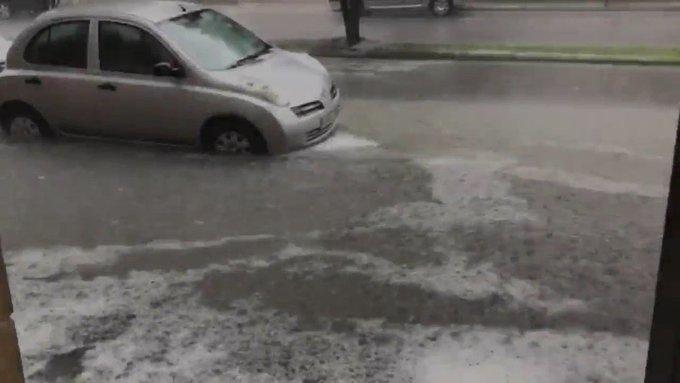 But northeastern Spain was not the only Iberian Peninsula location to have an entire spring’s worth of rainfall.