by Andrew Blankstein and Dennis Romero and Eric Leonard and Suzanne Ciechalski,NBC News•May 17, 2020 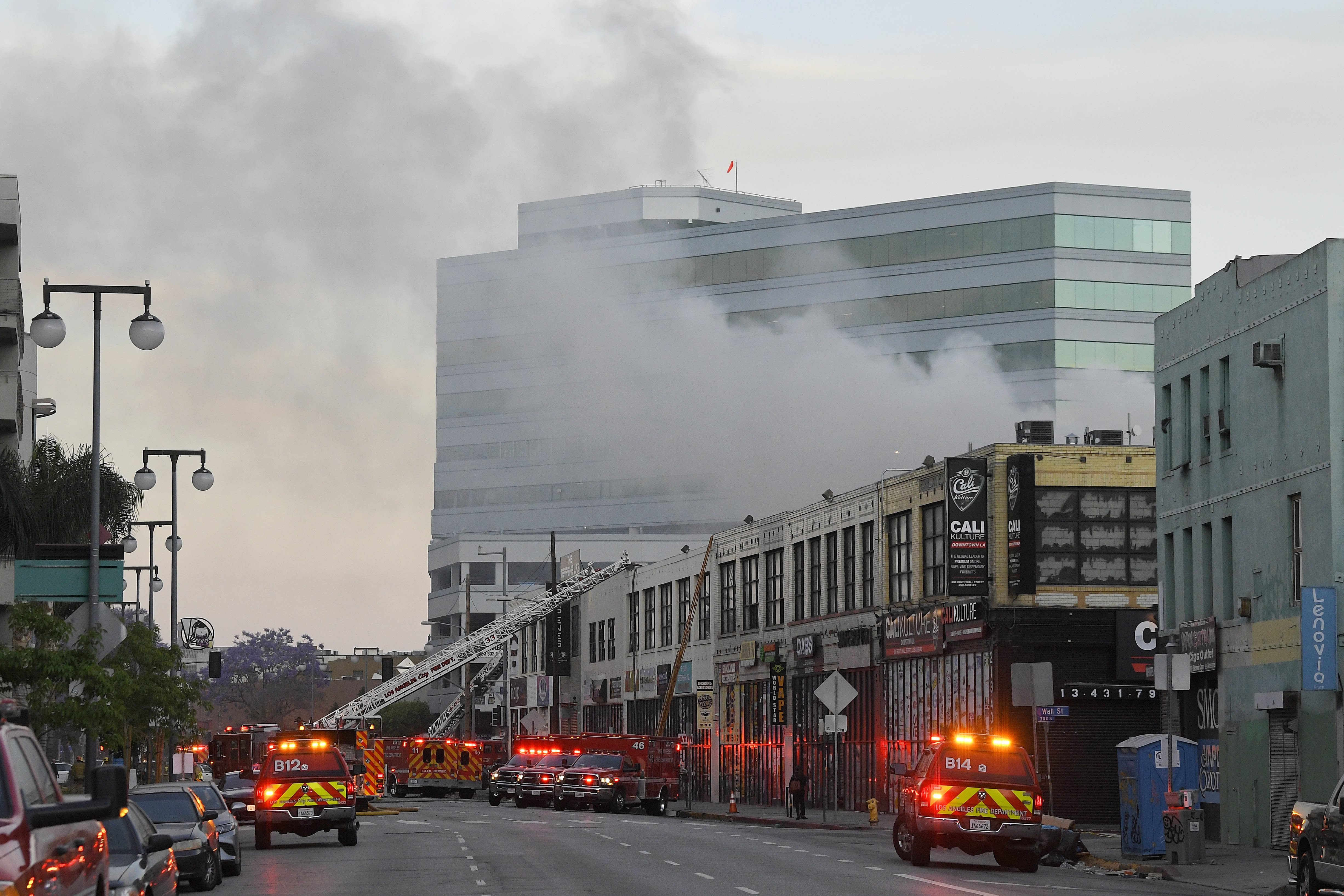 LOS ANGELES — Eleven firefighters were injured, two critically, when an explosion erupted during a fire Saturday downtown, the Los Angeles Fire Department said.”Firefighters have moved to a defensive posture for fire attack, and a medical branch has been created for treating and transporting injured firefighters,” the LAFD said in a statement.

Erick Mendoza@e_a_mendoza#BREAKING DowntownLA ; An explosion on scene has caused a MAYDAY with approx 10 firefighters down and multiple buildings on fire per @LAFD #Telemundo52 (

courtesy: DannyFromLA) The department initially said about 10 firefighters were down after an explosion at a one-story commercial building in the Toy District. More than 230 firefighters were at the scene, it said.A senior LAFD official later said 11 firefighters were injured. At least some were burned, the LAFD said in an update.An initial assessment found the business might be a wholesaler of products used to make concentrated cannabis products, a process that usually requires the use of highly flammable butane.”The occupancy was doing business as Smoke Tokes Wholesale Distributor, reportedly a supplier for those who make butane honey oil,” the LAFD said.The area also includes multiple vape supply stores that sell vitamin E acetate. The address was listed in a 2018 fictitious business name statement as „Smoke Place.”„My thoughts are with our brave @LAFD firefighters,” Los Angeles Mayor Eric Garcetti tweeted Saturday evening. „Closely tracking this situation as we continue to get more information.”Gov. Gavin Newsom said on Twitter, „Grateful for the brave firefighters and first responders on the scene battling these flames tonight.”The first report of a fire was recorded at 6:26 p.m., according to the department.After firefighters arrived, an explosion was reported, a „mayday” call went out and the blaze might have spread to „multiple buildings,” according to a subsequent LAFD statement.Pamela Sisson, 43, was on her way to her home in the nearby Arts District when she spotted the fire and used her cellphone to capture video.”It started to feel a little bit dangerous because ash was coming down,” she said. „It was becoming increasingly dangerous to stay anywhere near there.”The blaze was put out in less than two hours, the department said. The cause of the fire was under investigation.Andrew Blankstein reported from Los Angeles and Dennis Romero from San Diego.

At 11 p.m. EDT, the storm was located about 190 miles east-northeast of Cape Canaveral, according to the National Hurricane Center. It had maximum sustained winds of 40 mph and was moving north-northeast at 13 mph.

Arthur is expected to remain well offshore  of Florida and Georgia on Sunday, and then move near or east of the coast of North Carolina on Monday.

Forecasters issued a tropical storm watch for a portion of the North Carolina coast.

“Interests near the North Carolina coast should closely monitor the progress of this system, as it could produce gusty winds and heavy rains there on Monday,” forecasters wrote Saturday afternoon.

The system brought gusty winds and heavy rains across portions of east-central Florida on Saturday.

This marks the sixth consecutive year with a named storm in May, which is before the season’s official start date of June 1.

In fact, “in every year since 2012, except for 2014, there has been at least one named tropical system during May,” AccuWeather senior meteorologist Alex Sosnowski said.

Most of the May storms have tended to be weak and uneventful, with Tropical Storm Alberto in 2018 being a deadly exception. That storm, which hit 65 mph, killed 18 people in Cuba and the United States.

Tropical Storm Arthur is currently producing sustained winds of 40 mph. A Tropical Storm Watch has been issued for parts of the North Carolina coast by the National Weather Service.

Although the official start of hurricane season is June 1, there has been a preseason tropical system for most of the last 10 years, so it is not uncommon to have tropical activity this early, according to AccuWeather Meteorologist Courtney Travis.

Residents in South Florida saw impacts from Tropical Storm Arthur before it fully developed. A number of flash flood warnings were triggered along the southeastern coast of Florida as heavy downpours and thunderstorms continued on Friday night. Street flooding was reported across the Miami metro area.

Thursday was the second wettest May day on record for the city of Marathon in the Florida Keys. Heavy rain totaled 5.76 inches, stopping short of the city’s rainiest May day record of 6.60 inches set on May 27 in 1959. Marathon picked up a total of 6.45 inches from May 14-15, when the normal precipitation for all of May is 3.35 inches.

May 16 @ 530am – Check out these rain totals from Friday into Friday night! How much rain did you get? #flwx 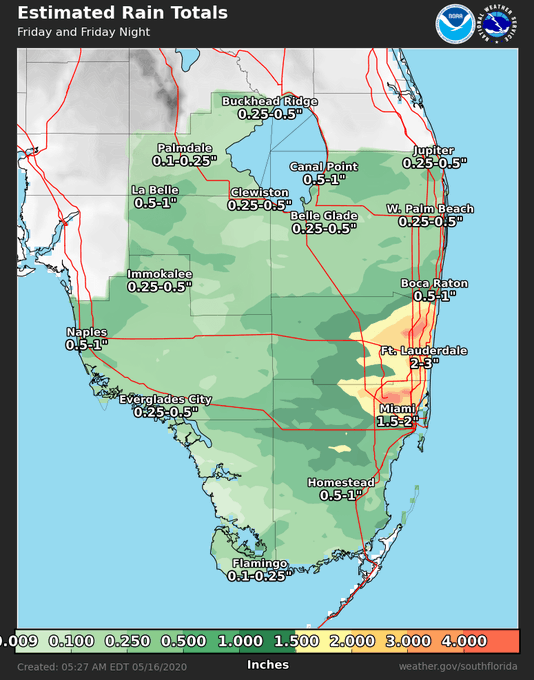 The heavy rain and thunderstorm activity seen in the Bahamas and Florida will continue to lift to the north and northeast into Sunday, AccuWeather meteorologists say. The storm and its heavy rain will remain off the coast from northeastern Florida to southern North Carolina this weekend.

According to Dan Kottlowski, AccuWeather’s top hurricane expert, the storm will track offshore of the southeastern United States and pass about 75 to 125 miles off the coast of North Carolina’s Outer Banks Sunday night into Monday, as Outer Banks beaches reopen to visitors.

The strongest winds will likely remain to the east of the low and across the open waters of the Atlantic; however, coastal parts of the Carolinas could have gale-force gusts Sunday into Monday.

„While it still appears that the worst of the storm will stay offshore, we are monitoring the potential for the storm to track closer to the coast and bring the Outer Banks more substantial rain and wind,” AccuWeather Senior Meteorologist Rob Miller said.

Those planning to head to the beach should be aware of the risk of rough surf and strong rip currents that expands northward along the entire Southeast coast this weekend.

NWS JacksonvilleHigh Risk of DEADLY Rip Currents this weekend at area beaches. When in doubt, don’t go out! 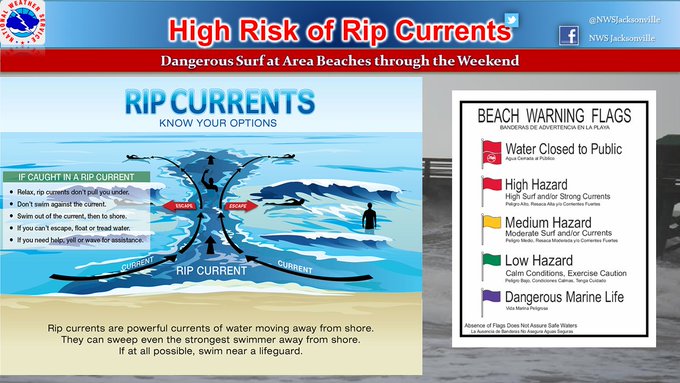 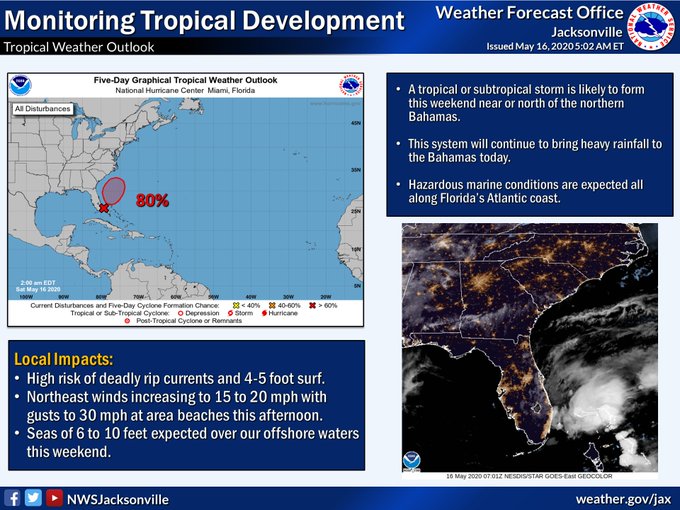 1:45 PM – May 16, 2020 See NWS Jacksonville’s other Tweets Multiple coronavirus testing sites in Florida were forced to close this weekend due to showers and windy weather caused by Tropical Depression One. The 14 state-run COVID-19 testing sites include Brevard Eastern Florida State College’s Palm Bay campus and University High School in Orange City. Miami Dade County has temporarily closed all testing sites as well. The testing sites will be closed until Monday, according to the Florida Department of Health.The 2020 season follows four straight years during which there were at least two U.S.-landfalling hurricanes, with Barry and Dorian striking in 2019. That’s the longest streak since 1947-50 and only twice since 1851 has the streak reached at least five years (1932-36 and 1876-82).Keep checking back on AccuWeather.com and stay tuned to the AccuWeather Network on DirecTV, Frontier and Verizon Fios.

‘Ultra-rare’ blue bees found in Florida. It’s been years since they were last seen.

A blue calamintha bee specimen at the Florida State Collection of Arthropods collected in 2002.

Researchers in Florida have rediscovered an „ultra-rare” metallic blue bee that hadn’t been spotted in years – so long that experts weren’t sure it still existed. Florida Museum of Natural History researcher Chase Kimmel found a blue calamintha bee on March 9, according to an emailed statement from Kimmel. It was the first time one had been spotted since 2016, the museum says.”We observed a shiny little blue bee grabbing (an Ashe’s calamint flower) and rubbing its head on the top portion of the flower 2-3 times,” Kimmel’s statement says. That behavior is unusual and a unique characteristic of the blue calamintha bee: „We were pretty shocked to see it.”Since then, more of the elusive bees have been spotted, but efforts to research the insect have been curtailed by the coronavirus pandemic, Kimmel said.The blue calamintha bee – or Osmia calaminthae – has unusual facial hairs that are used to collect pollen, the museum said in a release.‘Murder Hornets’: Some bees can ‘cook’ dreaded hornets, NYPD bee keeping officer explainsWatch: Georgia officials are trying to stop invasive lizard that eats ‘anything they want’It’s a unique insect for a number of reasons, Kimmel said: It collects pollen on its face, relies on a threatened flowering plant and is found primarily in a habitat in central Florida: Lake Wales Ridge.That region has an ancient history, the museum says: „When much of the state was underwater, higher elevation sand dune areas along the Central Florida ridge behaved almost like islands, producing isolated habitats,” according to the release.The region is a threatened ecosystem that is quickly disappearing, the release says. Even though help was limited during the pandemic, Kimmel says he’s scouted multiple sites looking for the solitary bee, which the museum says creates individual nests rather than hives.The bees had previously been found in four locations, Kimmel said. After extensive survey work primarily on protected state lands, researches now have spotted the bees on ten properties, which significantly expands their known footprint.

But it was no easy task.

„Even though I have found the bee in multiple sites it took hours and sometimes days to find even one bee,” Kimmel said.