Washington (AFP) – In a break with tradition, the White House of President Donald Trump has removed the portraits of two recent presidents, Bill Clinton and George W Bush, from the building’s entrance hall, CNN reported Friday.

The two paintings were moved from the Grand Foyer, where the portraits of recent presidents usually hang, to the Old Family Dining Room, which CNN described as „a small, rarely used room that is not seen by most visitors.”

It said the room was mainly used to store tablecloths and furniture. 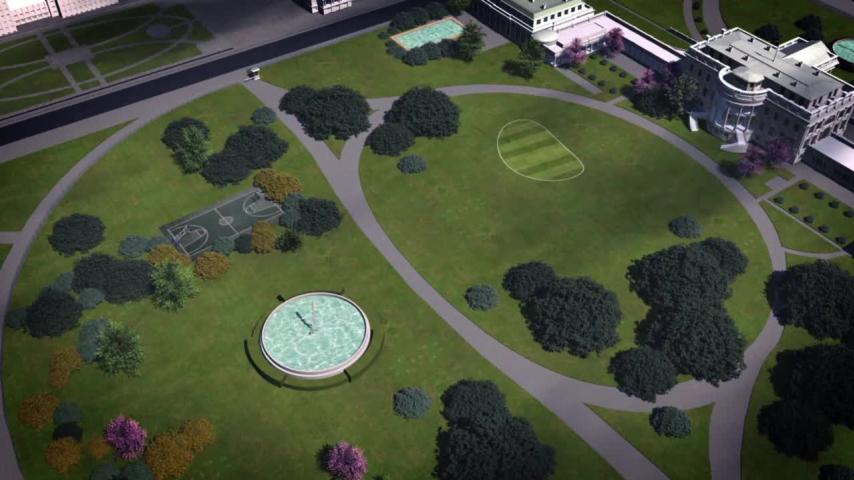 In place of pictures of Trump’s recent predecessors, there now hang pictures of William McKinley, who was assassinated in 1901, and of Theodore Roosevelt, his vice president who succeeded him upon his death, sources told CNN.

The news network said that Trump would have seen the two portraits on a daily basis in their previous position.

Hillary Clinton, wife of the former president and former Secretary of State, became an object of Trump’s ire when she ran against him in 2016, and has been a frequent critic of his leadership.

The White House did not respond to a request for comment on Friday.

CNN said the portraits had been moved within the last week.

A portrait of Barack Obama, the president who directly preceded Trump and who has been a frequent subject of his attacks, is not due to be formally unveiled during Trump’s first term, CNN said.

WASHINGTON — A top FBI agent recognized by February 2017 that a now notorious dossier of claims about purported Trump-Russia ties had credibility problems, but the Justice Department continued to rely on it as part of its basis to renew permission to wiretap a former Trump campaign adviser, documents released on Friday showed.

The documents included an FBI memo recounting a three-day interview in January 2017 with a person who served as a primary source for Christopher Steele, a former British intelligence officer who compiled the dossier for a research firm paid by Democrats. They also included an FBI agent’s notes disputing aspects of a New York Times article the next month.

The agent, Peter Strzok, had participated in the interview of Steele’s source, who suggested that the dossier misstated or exaggerated certain information that the source had gathered from a network of contacts in Russia and relayed to Steele. In his annotations about two weeks later, Strzok questioned the reliability of the dossier.

Reacting to a line in the newspaper article that senior FBI officials believed that Steele had a credible track record, Strzok wrote in the margins: “Recent interviews and investigation, however, reveal Steele may not be in a position to judge the reliability of his subsource network.”

Nevertheless, in the ensuing months, the Justice Department twice sought and obtained a court’s permission to renew a wiretap of the former Trump campaign adviser, Carter Page, recycling language from earlier applications that relied in part on information from the Steele dossier.

An inspector general report last year sharply criticized the FBI for not telling judges that the interview had raised doubts about the credibility of the Steele information. The bureau has since conceded to the court that oversees national security surveillance that the available evidence about Page was legally insufficient to justify the last two wiretaps.

The documents were released on Friday by Sen. Lindsey Graham, R-S.C., the chairman of the Judiciary Committee. A close ally to President Donald Trump, Graham has been using his position to try to discredit the Russia inquiry in an election year.

In a statement announcing the release of the documents, Graham called the FBI’s investigation into the Trump campaign “corrupt.” An accompanying news release from his office said that “the document demonstrates that Peter Strzok and others in FBI leadership positions must have been aware of the issues with the Steele dossier that the FBI’s interview with Steele’s ‘primary subsource’ revealed.”

“Senator Graham’s statement represents another attempt by President Trump’s congressional lackeys to use Pete’s work product to paint the Russia investigation as a political witch hunt,” Aitan Goelman, a lawyer for Strzok, said in a statement. He described Strzok’s notes as “nothing more than a dedicated counterintelligence professional diligently vetting public reports of intelligence information.”

While Strzok was still working on other aspects of the larger Russia investigation, he was not part of the team working on the wiretap renewals, his lawyer said. Another senior FBI counterintelligence official, Jennifer Boone, was supervising a team in charge of determining the sources of information for the dossier and of handling the wiretap targeting Page, according to people familiar with the investigation.

Strzok was later removed from the Russia investigation after the Justice Department inspector general discovered numerous texts on his work phone expressing animus toward the election of Trump. The inspector general, however, did not find evidence that he took or withheld any official action because of his personal opinions.

Strzok’s skeptical annotations of the Times article, headlined “Trump Campaign Aides Had Repeated Contacts With Russian Intelligence,” were similar to congressional testimony months later by the former FBI director James B. Comey disputing it. Comey did not say exactly what he thought was incorrect about the article, which cited four current and former American officials who spoke on the condition of anonymity to discuss classified information.

Strzok’s annotations disputed the article’s premise and other aspects. He wrote, “We are unaware of ANY Trump advisers engaging in conversations with Russian intelligence officials.”

Eileen Murphy, a Times spokeswoman, said, “We stand by our reporting.”

The wiretapping of Page was a small part of the overall investigation into Russia’s covert attempt to help tilt the election in Trump’s favor and whether any Trump campaign affiliates had conspired in that effort. The inspector general report found that the opening of the investigation met legal standards and that the Steele dossier had played no role in that decision; the agents working on it did not learn of its existence until later.

Still, the inspector general report’s uncovering of serious flaws in the wiretap applications — including numerous errors and omissions, among them the failure to alert the court to the doubts raised by the interview of Steele’s source — have made them a political focus.

The report eventually issued by Robert Mueller, the special counsel who later took over the investigation, did not rely on information from the dossier. It laid out how Russians hacked Democratic emails and sought to covertly sow discord on American social media. While it also found that the Russian government wanted Trump to win, and that the Trump campaign welcomed the interference and expected to benefit from it, it did not find sufficient evidence to establish any criminal conspiracy between Trump campaign associates and Russia.

This article originally appeared in The New York Times.

BERLIN (AP) — The leaders of Germany, France and Italy are calling for nations to “end their increasing interference” in Libya and respect a much-violated arms embargo, saying Saturday that they are ready to consider sanctions if breaches of the embargo continue.

That is despite an agreement in Berlin in January by leaders of world powers and other countries with interests in Libya’s war to respect the arms embargo, hold off on military support to the warring parties and push them to reach a full cease-fire.

Libya has been in turmoil since 2011, when a civil war toppled long-time dictator Moammar Gadhafi, who was later killed. The sprawling North African nation has since split between rival administrations in the east and the west, each backed by armed groups and foreign governments.

Merkel, Macron and Conte called for “an immediate cessation of fighting and for a stop of the ongoing military build-up throughout the country.”

“We also urge all foreign actors to end their increasing interference and to fully respect the arms embargo,” they said. They added that “we are ready to consider the possible use of sanctions should breaches to the embargo at sea, on land or in the air continue,” and said they look forward to proposals from EU foreign policy chief Josep Borrell on solutions.

The U.S. military has grown increasingly concerned about Russia’s growing influence in Libya, where hundreds of Russian mercenaries have backed a campaign by Libyan commander Khalifa Hifter to capture the capital, Tripoli, in the country’s west.

The report on counterterrorism operations in Africa by the Pentagon’s internal watchdog, published Thursday, says Turkey has paid and offered citizenship to thousands of mercenaries fighting alongside Tripoli-based militias against Hifter’s troops.

Berlin (AFP) – France, Italy and Germany are „ready to consider” sanctions on foreign powers violating an arms embargo in Libya, a joint statement by their leaders said Saturday.

The statement did not directly name any foreign actors funneling arms to Libya but multiple powers have been sending fighters and weapons, fuelling a bloody proxy war that reflects wider geopolitical rifts and divisions in the Middle East and within NATO.

While forces loyal to strongman Khalifa Haftar are backed by Russia, Egypt and the United Arab Emirates, the UN-recognised unity government is fighting back with Turkey’s support.

„We … urge all foreign actors to end their increasing interference and to fully respect the arms embargo established by the United Nations Security Council,” the statement said.

„We are ready to consider the possible use of sanctions should breaches to the embargo at sea, on land or in the air continue.”

Voicing „grave concerns” over the escalating military tensions in Libya, they urged „all Libyan parties and their foreign supporters for an immediate cessation of fighting and for a stop of the ongoing military build-up throughout the country.”

In Brussels for a crunch EU summit on hammering out a huge recovery rund for the bloc, the three European leaders had met on the sidelines of the meeting to discuss the deteriorating situation in Libya.

Since 2015, a power struggle has pitted the UN-recognised, Tripoli-based Government of National Accord (GNA) against forces loyal to Haftar, who is based in eastern Benghazi.

Ankara’s military support for the GNA has tipped the balance and allowed its forces in June to repel Haftar’s 14-month advance on Tripoli and launch a counteroffensive.

This week, Egypt racheted up tensions, with its president warning his country „will not stand idle in the face of any moves that pose a direct threat to the national security not only of Egypt but also that of Libya”.

Libya has been mired in chaos since the 2011 uprising that toppled and later killed longtime dictator Moamer Kadhafi.

MISRATA, Libya (Reuters) – Libya’s internationally recognised Government of National Accord (GNA) on Saturday moved fighters closer to Sirte, a gateway to Libya’s main oil terminals that the GNA says it plans to recapture from the eastern-based Libyan National Army (LNA).

Witnesses and GNA military commanders said a column of about 200 vehicles moved eastwards from Misrata along the Mediterranean coast towards the town of Tawergha, about a third of the way to Sirte.

The GNA recently recaptured most of the territory held by the LNA in northwest Libya, ending eastern commander Khalifa Haftar’s 14-month campaign to take the capital, Tripoli, before the new front line solidified between Misrata and Sirte.

Backed by Turkey, the GNA has said it will recapture Sirte and an LNA airbase at Jufra.

But Egypt, which backs the LNA alongside the United Arab Emirates and Russia, has threatened to send troops into Libya if the GNA and Turkish forces try to seize Sirte.

The United States has said Moscow has sent warplanes to Jufra via Syria to act in support of Russian mercenaries who are fighting alongside the LNA. Moscow and the LNA both deny this.

The LNA has itself sent fighters and weapons to bolster its defence of Sirte, already badly battered from earlier phases of warfare and chaos since the 2011 revolution against longtime autocrat Muammar Gaddafi.