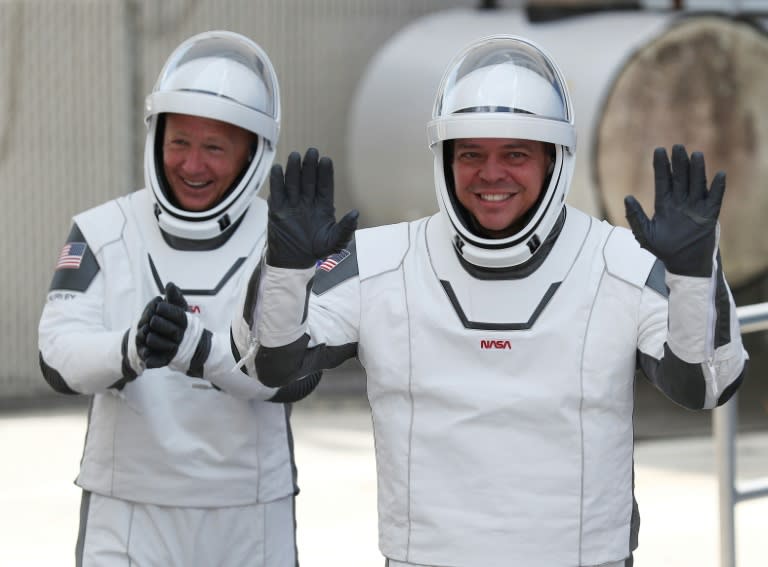 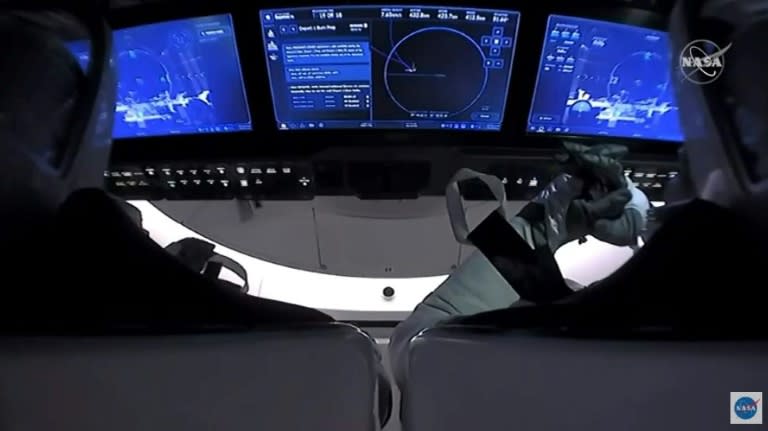 NASA footage showed the capsule drifting slowly away from the ISS in the darkness of space, ending a two month stay for the first US astronauts to reach the orbiting lab on an American spacecraft in nearly a decade.

„And they are off!” the US space agency tweeted, with Doug Hurley and Bob Behnken set to splash down Sunday.

„(They) will spend one more night in space prior to returning to their homeland, Earth,” NASA tweeted.

Their proposed splash-down sites are off the coast of western Florida’s panhandle, while tropical storm Isaias is headed toward the state’s east coast.

NASA opted to go ahead with bringing the pair home despite the threat of Isaias, which was downgraded to a tropical storm from a hurricane on Saturday.

The agency later added the capsule was confirmed to be „on a safe trajectory.”

„Now is the entry, descent and splashdown phase after we undock, hopefully a little bit later today,” Hurley said in a farewell ceremony aboard the ISS that was broadcast on NASA TV.

„The teams are working really hard, especially with the dynamics of the weather over the next few days around Florida,” he said.

Earlier, during the ISS ceremony, Behnken said that „the hardest part was getting us launched. But the most important part is bringing us home.”

Addressing his son and Hurley’s son, he held up a toy dinosaur that the children chose to send on the mission and said: „Tremor The Apatosaurus is headed home soon and he’ll be with your dads.”

Behnken later tweeted: „All my bags are packed, I’m ready to go.”

Mission chief Chris Cassidy called it an „exciting day” and hailed the importance of having a new means to transport astronauts.

The mission, which blasted off May 30, marked the first time a crewed spaceship had launched into orbit from American soil since 2011 when the space shuttle program ended.

It was also the first time a private company has flown to the ISS carrying astronauts.

The US has paid SpaceX and aerospace giant Boeing a total of about $7 billion for their „space taxi” contracts.

But Boeing’s program has floundered badly after a failed test run late last year, which left SpaceX, a company founded only in 2002, as clear frontrunner.

For the past nine years, US astronauts traveled exclusively on Russian Soyuz rockets, for a price of around $80 million per seat.

NASA astronauts Bob Behnken and Doug Hurley are headed back to Earth after a two-month mission at the International Space Station, marking the first time a privately owned craft will return astronauts from the space station to Earth.

The crew departed the space station Saturday afternoon aboard SpaceX’s Crew Dragon capsule, the same craft that brought them to orbit in that vessel’s first crewed flight. After leak checks, the astronauts lowered the visors of their helmets, and a command to undock was sent to the spacecraft at 7:30 p.m. Eastern time.

By 7:40, all that could be seen of the capsule from the space station view were two dots of light.

“It’s been an honor and a privilege,” Hurley said on the communications system as the capsule drifted away from the space station. „It’s been a great two months, and we appreciate all you’ve done as a crew to prove out Dragon on its maiden flight.”

The last major test for the capsule will come Sunday, when it is set to splash down at 2:41 p.m. Eastern time in the Gulf of Mexico, near Pensacola, Fla.

There were seven possible landing sites along the Florida coast; three in the Atlantic Ocean are in the path of Tropical Storm Isaias.

The splashdown will mark the first time in 45 years that astronauts have returned to space via an ocean landing.

The last such landing came in July 1975, when an Apollo capsule splashed down in the Pacific Ocean during the Apollo-Soyuz Test Program mission.

Since then, spacecraft have made landings on terra firma — NASA’s space shuttle landed on a runway, and the Russian Soyuz capsule lands in Kazakhstan.

A successful Sunday splashdown would cap off a test mission that has so far gone well for Hawthorne-based SpaceX.

Bob Behnken and Doug Hurley are on their way home.

The two NASA astronauts departed the International Space Station on Saturday evening, beginning a roughly day-long voyage back to their families on Earth.

Behnken and Hurley left in a vehicle called Crew Dragon „Endeavour,” a spaceship designed, built, and operated by SpaceX with about $2.7 billion in government funding. It’s SpaceX’s second experimental flight of the vehicle, a mission called Demo-2, and the aerospace company’s first time putting people on board.

The Demo-2 mission’s departure makes SpaceX, founded by Elon Musk in 2002, the first company in NASA’s Commercial Crew Program to successfully pull off a visit to the $150 billion, football field-size laboratory.

But Behnken and Hurley’s return trip has just begun. Now that they’ve flown away from the ISS, they must perform a risky descent through Earth’s atmosphere — the phase of the flight that Musk has called his „biggest concern.”

If the flight successfully lands on Sunday afternoon, it would be the first crewed American spaceship to leave and return to Earth since July 2011, when NASA retired its space shuttle program.

The beginning of the end to an historic 63-day mission

Behnken and Hurley launched to orbit on May 30 and docked to the ISS a day later, beginning their historic 63-day mission chockful of science, space station maintenance, and breathtaking views of Comet Neowise.

But all good things must come to an end, and the crew began loading supplies, experiments, and personal effects — including an historic American flag — into Endeavour early Saturday morning.

Once they were packed up, they said goodbye to the ISS crew members they lived and worked with for two months: NASA astronaut and station commander Chris Cassidy, and Russian cosmonauts Anatoly Ivanishin and Ivan Vagner.

Behnken and Hurley then climbed into Endeavour, donned their spacesuits, closed the hatch, and began preparing to depart. At 7:35 p.m. ET, the spaceship gently shoved off the ISS with a series of small burps of propellant, right on schedule.

The crew then fired departure burns to build up a protective „keep-out sphere” around the space station, to begin their journey in earnest.

„Safe travels, and have a successful landing. Endeavour’s a great ship. Godspeed,” a mission controller told the crew.

„It was an honor and privilege to be part of Expedition 63,” Hurley said. „Now it’s time to finish our DM-2 test flight in order to pave the way for future Dragon crews. Go Endeavour!”

If all goes well — the path of Hurricane Isaias has allayed early concerns about the safety of landing near Florida — the astronauts will splash down in the Gulf of Mexico on Sunday at 2:48 p.m. ET.

To safely return to Earth, though, the astronauts must perform a series of critical maneuvers with Endeavour over the next 19 hours.

The first steps Behnken and Hurley took included firing the spaceship’s thrusters to slip into the correct orbit. NASA will perform more remotely while the astronauts sleep.

After they wake up on Sunday, the crew prepare for landing. Around 1:45 p.m. ET, according to a NASA TV schedule, the astronauts will jettison Endeavour’s cylindrical trunk. The heavy piece of hardware powered and helped navigate the ship in orbit, but isn’t needed during landing. Dumping the trunk is essential to exposing the heat shield of the aerodynamic crew capsule for the next stage of the flight.

Around 1:51 p.m. ET, they’ll need to fire Endeavour’s built-in thrusters for about 11 minutes to dramatically slow down the capsule, helping it fall from orbit and back to Earth. At this point, the heat shield must absorb blistering 3,500-degree-Fahrenheit heat that’s generated by plowing through the planet’s atmosphere at about 25 times the speed of sound.

It’s this phase that concerns Musk, SpaceX’s CEO and chief designer, more than any other.

„The part that I would worry most about would be reentry,” Musk told Irene Klotz of Aviation Week ahead of the launch in May.

The spaceship capsule has an asymmetric design to accommodate its emergency launch-escape system thruster pods. And the imbalance caused by those pods — though very unlikely to cause a problem — is the core of Musk’s concern.

„If you rotate too much, then you could potentially catch the plasma in the super Draco escape thruster pods,” Musk said, adding that this could overheat parts of the ship or cause it to lose control due to wobbling. „We’ve looked at this six ways to Sunday, so it’s not that I think this will fail. It’s just that I worry a bit that it is asymmetric on the backshell.”

When it’s about 18,000 feet above the water, Endeavour should automatically deploy a set of drogue parachutes and slow to about 120 mph. Around 6,500 feet, four large main parachutes should pop out and further decelerate Behnken and Hurley’s capsule before they splash into the ocean at around 15 mph.

NASA and SpaceX are hoping to land Endeavour at a site off the coast of Pensacola, Florida, and immediately greet them with recovery boats and a helicopter that will whisk them back to land. If weather conditions turn poor near Pensacola, the astronauts will try to land at a backup site about 100 miles east, near Panama City.

SpaceX has five other potential landing sites, though Hurricane Isaias has knocked some out of contention. NASA’s landing conditions include wind speeds under 11 mph, no rain or lighting, and clear skies.

Along with trying to get home, Behnken and Hurley are performing an essential step in proving that SpaceX’s Crew Dragon ship is safe to fly people in the future, including private citizens. NASA and SpaceX plan to finish reviewing data from the experimental mission over the following six weeks, likely resulting in its crucial human-rated certification from the space agency.

In a future mission that NASA recently announced, astronaut Megan McArthur (who is married to Behnken) will ride the same Crew Dragon ship to orbit for a roughly six-month stay.

Ahead of the Demo-2 mission, NASA estimated a roughly 1-in-276 chance of losing the crew at any point during the flight.

Do you have a story or inside information to share about the spaceflight industry? Send Dave Mosher an email at dmosher+tips@businessinsider.com or a Twitter direct message at @davemosher. More secure communication options are listed here.