Strong Tropical Storm Gamma drenches Cancun area of Mexico  Sun, October 4, 2020, 12:02 AM GMT+3·2 mins read MEXICO CITY (AP) — Tropical Storm Gamma hit the resort-dotted coast of Mexico’s Yucatan Peninsula at near-hurricane force on Saturday, flooding streets, knocking down vulnerable buildings and stranding people trying to return from outlying islands.The storm came ashore near Tulum with maximum sustained winds of nearly 70 mph (110 kph) — 4 mph (9 kph short of hurricane force), according to the U.S. National Hurricane Center in Miami.By night, winds had dipped to 60 mph (95 kph), and it was centered about 85 miles (135 kilometers) north-northwest of Tulum, moving to the northwest at 7 mph (11 kph).Forecasters said the biggest threat to the area, which recently reopened to tourism after a pandemic shutdown, was likely the torrential rain and possible flooding, with as much as 10 to 15 inches (250 to 375 mm) possible over the northeastern part of the peninsula.The state’s tourism department reported Friday on Twitter that more than 41,000 tourists were present in Quintana Roo, with hotels in Cancun and Cozumel already at more than 30% occupancy.Social media accounts of Quintana Roo’s state government showed police removing people from vulnerable shacks and removing downed treesNumerous local news media published images of a thatch-roof, open-sided seaside church, Maria Star of the Sea just north of Cancun, collapsed by the storm.The storm forced suspension of sea ferry services between Cancun and Playa del Carmen with the islands of Cozumel and Isla Mujeres.The storm was projected to emerge from the northern edge of the Yucatan on Sunday and then curve toward the west-southwest into the lower Gulf of Mexico, flinging heavy rains across a large part of southern Mexico and Central America.Meanwhile, Hurricane Marie began to weaken Saturday over the open Pacific.Marie was a Category 4 hurricane with maximum sustained winds of 130 mph (215 kph) Friday evening, according to the Hurricane Center, but winds dipped to Category 3 status, 115 mph (185 kph) by Saturday evening.It was centered about 1,180 miles (1,900 kilometers) west of the southern tip of the Baja California Peninsula and was headed to the northwest at 8 mph (13 kph).Forecasters said it shouldn’t pose a threat to land.

The U.S. National Hurricane Center said that a weather station at Xel-Ha Park, along the Yucatan coast just north of Tulum, reported sustained winds of 55 mph (89 km/h) and wind gusts up to 68 mph (109 km/h).On the island of Cozumel, just offshore from the Yucatan Peninsula, wind gusts of 40 mph (64 km/h) were reported early Saturday afternoon.Gamma is expected to continue to batter the Yucatan Peninsula through the weekend with heavy rain and gusty winds before shifting into the Gulf of Mexico.

On Friday, tropical storm watches and warnings were issued for parts of the Yucatan Peninsula.

The Governor of the state of Quinatana Roo, which contains cities like Tulum, Playa del Carmen, and Cancun, advised on Twitter that residents shelter at home and report emergencies to the appropriate authorities.

According to Noticaribe, one of the hardest-hit areas thus far is Playa del Carmen, where the State Coordination of Civil Protection issued a red alert on Saturday morning, due to Gamma’s impending impacts.

Reports of fallen trees, blackouts and flooding in main streets were noted by several emergency agencies in the city.

Gamma is expected to continue to move through the northern Yucatan Peninsula through the weekend, continuing rounds of heavy rain and gusty winds.

Before Gamma pushed into the Yucatan Peninsula, much of southeastern Mexico was deluged by heavy rainfall at the end of September and start of October. 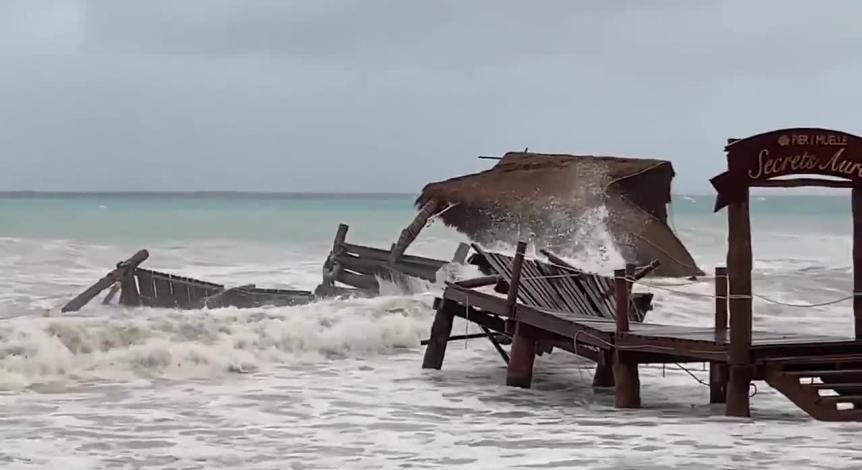 Scroll back up to restore default view. Tropical Storm Gamma made landfall near Tulum, Mexico, at 11.45 am local time on Saturday, October 3. The storm brought strong winds, rain and lashing waves to the Mexican coastline following landfall.This footage was taken along the beach outside the Secrets Aura Cozumel resort. The video shows the waves coming into the beach, causing a wooden pier to collapse. A pelican also took the time to observe the choppy conditions.The National Hurricane Center reported when the tropical storm made landfall it was nearly at hurricane strength with sustained winds near 70 mph. Meteorologists said the storm could bring flooding to Mexico and Central America.NHS also reported the storm was moving inland on Saturday night and was producing heavy rainfall. Credit: @the_klute via Storyful