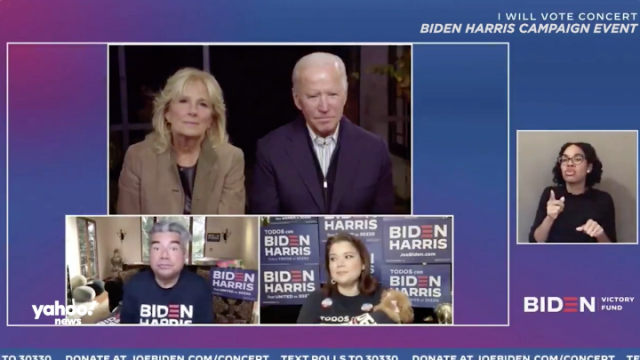 Trump says Biden called him George. He didn’t. He was referring to George Lopez.President Trump kicked off the first of his three reelection rallies in Pennsylvania on Monday by renewing his attempt to depict former Vice President Joe Biden as “sleepy” and confused. But it was Trump who got his facts wrong.In a speech in Allentown, Pa., that stretched over 81 minutes, the president seized on a purported flub — first tweeted by a Republican operative and picked up by Fox News — in which Biden appeared to begin saying the name of former President George W. Bush rather than President Trump during a virtual campaign event.Trump misstated the source of the quote, attributing it to CBS’s “60 Minutes,” which had broadcast interviews with the presidential candidates Sunday night.“Did you watch him on ‘60 Minutes’ last night?” Trump asked the crowd. “Did you see yesterday when he called me George? ‘No, no, I don’t if I like George.’ No, not George. Not George. What a mess.”“Can you even imagine losing to a guy like this?” the president continued. “He can’t even remember my name. Now, I’m not that big of an ego guy. He should be able — I’m the candidate, good candidate. He could not remember my name yesterday. This is who you’re putting in office.”

Trump at a rally in Allentown, Pa., on Monday. (Spencer Platt/Getty Images)Except Biden was not referring to Trump by the wrong name. He was addressing the comedian George Lopez, who was interviewing him for a live stream called “I Will Vote.”“If someone who is undecided, or maybe thinking about not voting, why should they vote and why should they vote for you?” Lopez asked Biden.”Well, first of all, the reason they should vote is that there’s a lot on the ballot this year,” Biden said. “I mean, this is the most consequential — not because I’m running, but because who I’m running against — this is the most consequential election in a long, long time. And the character of the country in my view is literally on the ballot, what kind of country we’re going to be. Four more years of — George, uh, George — is gonna find ourselves in a position of where if Trump gets elected, we’re gonna be in, we’re gonna be in a different world.”

The German embassy in Bangkok became a new focal point of Thailand’s months-long pro-democracy rallies on Monday as thousands marched on the building to petition Berlin to investigate the Thai king’s use of his powers while residing in Bavaria.

Since 2007, King Maha Vajiralongkorn, who ascended to the throne in 2016, has spent long periods of time in southern Germany.

But his extended presence on German soil has become a diplomatic headache for Berlin during Thailand’s nationwide rallies, where some protest leaders have made bold demands for the monarchy to be reformed – long a taboo subject in the Southeast Asian nation because of strict lese majeste laws.

In Germany, Heiko Maas, the foreign minister warned the king against using the country as a base to conduct Thai politics.

“We are monitoring this long-term,” Mr Maas said. “It will have immediate consequences if there are things that we assess to be illegal.”

His comments came as the embassy’s premises in central Bangkok turned into a potential flashpoint between rival protest groups on Monday.

In the early afternoon, a small group of royalists, wearing yellow as a sign of respect for the monarchy and waving Thai flags, chanted “Long Live the King!” as they delivered a letter to the German government urging it to ignore requests to probe his activities.

But as night fell, the huge crowds of pro-democracy protesters, some wearing protective yellow and white hard hats, descended on the same spot, marching to the heavily guarded embassy in the Sathorn neighbourhood, and staging a peaceful sit-in protest under a banner reading “Reform the Monarchy.”

According to local media reports, three were admitted to the embassy premises to deliver the petition, and the Bundestag will debate the issue again on Wednesday.

A statement read by anti-monarchy protesters at the German embassy from “the People” accused the king of interfering in Thai politics and said that having failed to get “the royal puppet” to listen – a reference to Prayuth Chan-ocha, the prime minister – they had come to “the puppet owner”.

“The era of change has arrived. The flowing stream of democracy cannot be stopped,” it said. “Down with feudalism, Long live the people.”

Thousands of protesters, a majority of them students, have been demonstrating since July to demand the resignation of Prayuth, reforms of the military-scripted constitution, and for the government to „stop harassing” political opponents.

General Prayuth seized power in a 2014 coup and protesters accuse him of engineering last year’s election to retain the army’s grip on power. He says the election was fair.

Calls to curb the powerful king’s powers and bring the monarchy under the constitution have been especially controversial and prompted a backlash from Thailand’s staunchly pro-monarchy establishment.

Tensions spiked earlier this month when protesters yelled angry slogans at Queen Suthida as she passed by in her motorcade and flashed three-finger salutes – a symbol borrowed from Hollywood’s Hunger Games franchise to signal anti-establishment defiance.

The government responded to the incident by imposing emergency measures banning gatherings of more than four, while the authorities arrested scores of activists.

But Gen Prayuth was forced to revoke it a week later when tens of thousands of demonstrators openly flouted the order by staging multiple mass rallies and „guerrilla” protests across Bangkok.

The premier has ignored calls for his resignation and said some of the protesters’ grievances would be addressed in a special two-day parliamentary session on Monday and Tuesday.

However, political opponents used the session to make their own demands that he resign, accusing him of using the monarchy to maintain his grip on power.

Questions have been asked about why the queen’s motorcade was slowly skirting the protests instead of taking an alternative route. Protesters say they were given no warning and did not seek to block the vehicle.

“The prime minister is a major obstacle and burden to the country. Please resign and everything will end well,” said Sompong Amornvivat, leader of the opposition Pheu Thai party, the largest single party in parliament.