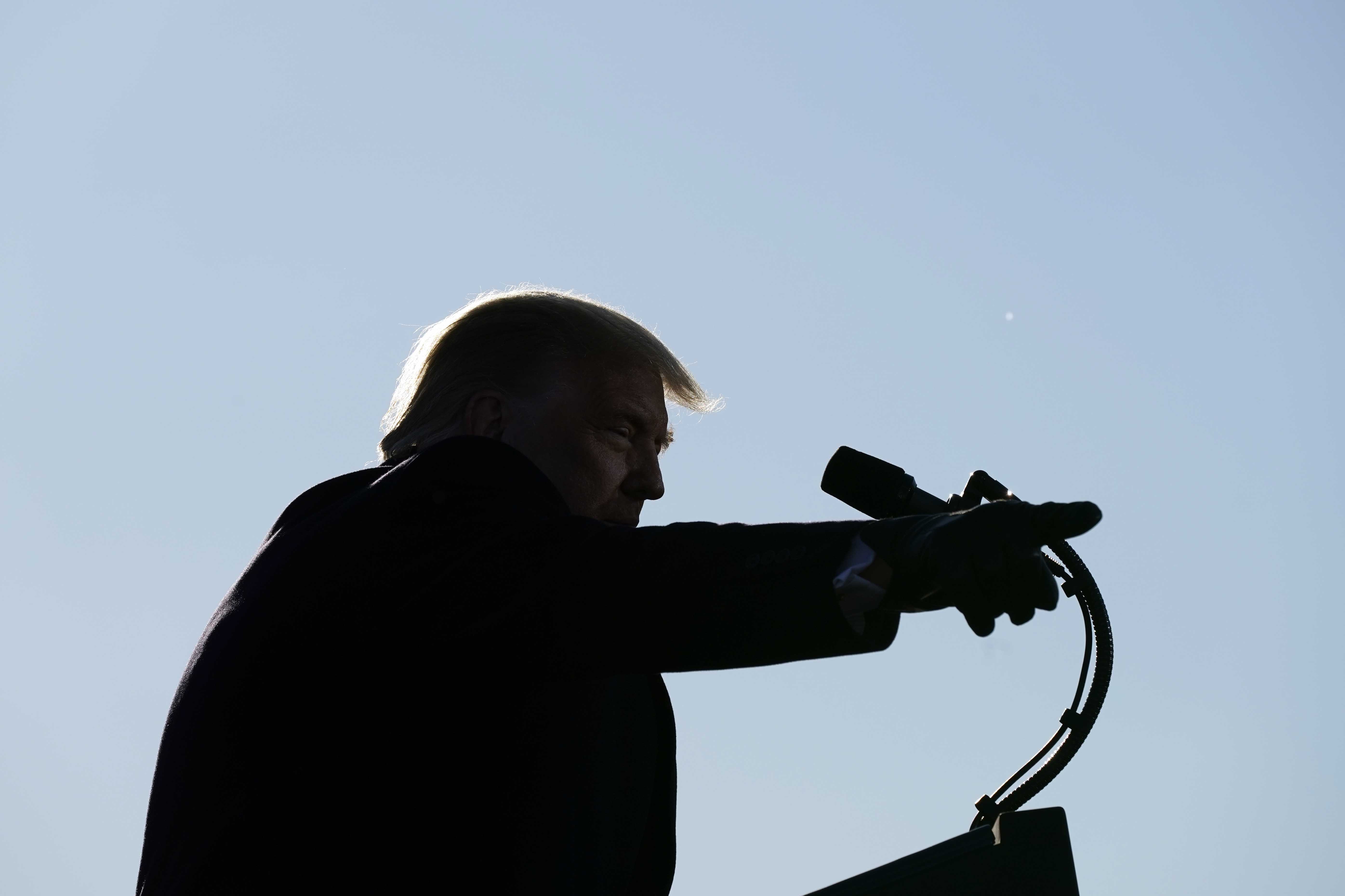 Some voter intimidation is blatant, like the time when off-duty sheriff’s deputies and police officers in New Jersey patrolled predominantly Black and Latino polling places on Election Day while wearing armbands with a made-up name, the National Ballot Security Task Force.

Carrying revolvers and two-way radios on their belts, they questioned voters, ripped down campaign signs and harassed poll workers, all on behalf of the Republican Party, whose candidate for governor won by a razor-thin margin of 1,797 votes.

The New Jersey scheme, which took place in 1981 but is still remembered for its brashness by those who track transgressions at the polls, was clear-cut enough that the Republican National Committee agreed afterward to refrain from targeting minority voters in the name of preventing supposed voter fraud. But just what constitutes unlawful behavior on Election Day can be challenging to define, experts say, and can differ drastically from one jurisdiction to the next.

Is a visible weapon inherently intimidating? What about chanting “four more years” outside a polling place? Or accosting a man helping his disabled mother to vote?

Such questions may be crucial this Election Day as experts warn of potential unrest and increased activity by far-right extremists, and as President Donald Trump’s request that supporters “go into the polls” and “watch very closely” has resulted in confusion over what amounts to legal poll watching and what crosses the line into unlawful intimidation.

“It is gray,” said Justin Levitt, an election law expert at Loyola Law School in Los Angeles. “The intent to keep people away from the polls is impermissible. But there’s some difference between what might make people uncomfortable and activity undertaken to keep people away.”

Federal law prohibits the use of threats, duress, outright violence or economic coercion to suppress or induce voting. But as a Justice Department guide to prosecuting election crimes notes, voter intimidation is “amorphous and largely subjective in nature” and is “difficult to prosecute.” 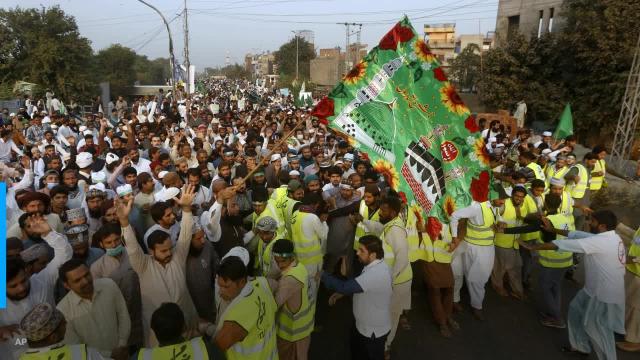 Tens of thousands of Muslims protested in Pakistan, Bangladesh and Palestinian territories on Friday after killings in a French church prompted a vow from President Emmanuel Macron to stand firm against attacks on French values and freedom of belief.

ISLAMABAD/DHAKA (Reuters) – Tens of thousands of Muslims protested in Pakistan, Bangladesh and Palestinian territories on Friday after killings in a French church prompted a vow from President Emmanuel Macron to stand firm against attacks on French values and freedom of belief.

French Interior Minister Gerald Damarnin said France – home to Europe’s largest Muslim community and hit by a string of militant attacks in recent years – was engaged in a war against Islamist ideology and more attacks were likely.

In Pakistan, police briefly fired tear gas at protesters who broke through security blockades in Islamabad in a failed attempt to demonstrate at the French Embassy against the printing in France of images depicting the Prophet Mohammad.

Protests and gatherings marking the occasion were also held in the Pakistani cities of Karachi, Lahore and Peshawar.

„Macron is leading Islamophobia,” said Dhaka demonstrator Akramul Haq. „He doesn’t know the power of Islam. The Muslim world will not let this go in vain. We’ll rise and stand in solidarity against him.”

Some Bangladeshi demonstrators also burned effigies of Macron and carried cutouts of the president with a garland of shoes around his neck, a severe insult according to Islam.

In a Muslim-majority district of India’s financial hub Mumbai, some 100 posters showing Macron with a boot on his face and calling him a „demon” were pasted on pavements and roads.

In Lebanon, security forces fired tear gas to drive back some 300 protesters including supporters of a local Sunni Islamist party who marched from a mosque in the capital Beirut to the official residence of the French ambassador.

Thousands of Palestinian worshippers rallied after Friday prayers at Al-Aqsa Mosque, the third holiest site in Islam, in Jerusalem’s walled Old City to condemn the republication of Mohammad caricatures in France. „A nation whose leader is Mohammad will not be defeated,” protesters chanted.

„We hold the French president responsible for acts of chaos and violence that are taking place in France because of his comments against Islam and against Muslims,” said Ikrima Sabri, the preacher who delivered the sermon at al Aqsa.

In Ramallah, in the Israeli-occupied West Bank, Palestinians trampled on a large French flag and burned other French flags.

In Gaza, ruled by Palestinian Islamist movement Hamas, hundreds of Palestinians took part in anti-France rallies, chanting: „With our souls and blood we will redeem the Prophet.”

Thousands in Somalia turned up for Friday prayers in mosques where sermons were dominated by curses and condemnation of Macron and his government.

Abdirahman Hussein Mohamed,, a shopkeeper in the capital Mogadishu, set aside all French products including face wash, perfumes and other cosmetics with a large sign, „NOT FOR SALE”.

„I will never sell those products…as long as France does not apologise. France insulted our Prophet,” Mohamed told Reuters. Some women shoppers agreed.

„I used to be one of the consumers of French cosmetics. Now I will no longer buy,” said Anisa Ahmed, 22. „I will look for products of other countries.”

Russian police detained around 15 people in Moscow after dozens gathered outside the French Embassy to protest against Macron. Some of the protesters stamped on portraits of Macron and chanted „Allahu Akbar”.

France raised its security alert to the highest level on Thursday after a knife-wielding man shouting „Allahu Akbar” (God is Greatest) beheaded an elderly woman in a church and killed two more people before being shot and taken away by police.

„We will not give any ground,” Macron said outside Notre Dame Basilica in the French Riviera city of Nice. France had been attacked „over our values, for our taste for freedom, for the ability on our soil to have freedom of belief”, he added.

The violence coincided with growing Muslim anger over France’s defence of the right to publish cartoons depicting the Prophet Mohammad, after an Islamist sympathiser decapitated a French teacher earlier this month for showing such images to pupils during a civics lesson.

„It is just the most callous and cowardly and vicious act of barbarism by terrorists and should be condemned in the strongest possible way,” Morrison said. „We share values (with France). We stand for the same things.”

He also condemned as absurd comments by ex-Malaysian premier Mahathir Mohamad that Muslims had a right to be angry and kill „millions of French people for the massacres of the past”. Mahathir said his comments were taken out of context.

Associated Press•October 30, 2020
Bangladesh France Protest DHAKA, Bangladesh (AP) — Tens of thousands of Muslims marched in Bangladesh’s capital on Friday to protest the French president’s support of secular laws allowing caricatures of the Prophet Muhammad, burning effigies of him and calling for a boycott of French products.

Protests were also reported across the country after Friday’s weekly Muslim prayers.

In Dhaka, tens of thousands of people from more than a dozen Islamist parties and groups poured into the streets near the Baitul Mokarram national mosque demanding that Bangladesh sever relations with France. Some carried banners reading “Say no to Islamphobia” and “Boycott French products.”

Barbed-wire fences were installed near the mosque as hundreds of police in riot gear cordoned off the processions.

The protesters carried effigies of President Emmanuel Macron and then burned them.

“I ask the government to remove the French Embassy from this country immediately. Otherwise, in the face of the movement, no one favoring France will be able to stay in power,” Abu Taher Jihadi al Kashemi, a leader of the marches, told the protesters.

France is an important aid provider and trading partner for Bangladesh.

Protests began in the Muslim-majority country earlier this week, with pressure growing on Prime Minister Sheikh Hasina to officially denounce France. Hasina, who has yet to officially comment, follows a policy of balanced diplomatic ties with Muslim and Western nations.

The Islamist parties support the introduction of Islamic Shariah law in Bangladesh, which is governed by a legal system largely based on British common law.

Muslim-majority countries across the world have been outraged by Macron’s refusal to condemn the publication or display of caricatures of the Prophet Muhammad. In Islam, any depiction of the prophet is prohibited. The issue has come to light again in recent days following the gruesome beheading near Paris of a French teacher who showed caricatures of the prophet in class. An 18-year-old Chechen refugee who carried out the attack was later shot dead by police.

The teacher, Samuel Paty, has been heralded as a symbol of France’s staunch secular ideals and its rejection of religious intrusion in public spheres. Macron and members of his government have vowed to continue supporting such caricatures as protected under freedom of expression.

A series of attacks that French authorities have attributed to Muslim extremism has followed. On Thursday, a knife-wielding Tunisian man carrying a copy of the Quran killed three people at a church in the Mediterranean city of Nice.

Muslim politicians and religious scholars have condemned such caricatures as a form of hate speech and view them as sacrilegious and insulting to Islam.