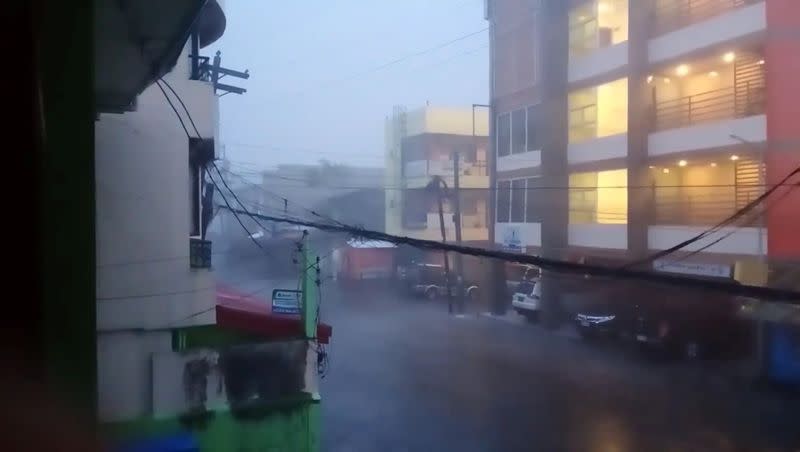 A view of heavy rain during Typhoon Goni in Sorsogon city MANILA (Reuters) – A super typhoon barrelled into the southern part of the Philippines’ main island of Luzon on Sunday, bringing „catastrophic” violent winds and intense rains with two landfalls so far, the weather bureau said.Typhoon Goni is the world’s strongest storm so far this year, gaining further strength with 225 kph (140 miles per hour) sustained winds and gusts of up to 310 kph (190 mph).Philippine authorities evacuated nearly a million people to safer ground before Goni approached the eastern provinces and made landfall in Catanduanes and Albay in the Bicol region.The weather bureau said „catastrophic violent winds and intense to torrential rainfall” were expected to prevail over Bicol provinces as well as portions of Quezon, Laguna and Batangas, south of the capital Manila.

„This a particularly dangerous situation for these areas,” it said in a bulletin at 0000 GMT.The capital Manila was also in the projected path of Goni, the 18th tropical storm in the country.A third landfall was expected to hit Quezon province later in the day, weather forecaster Lorie dela Cruz told a radio station.Between 19 million and 31 million people could be affected, including those in danger zones, the disaster management agency said.Storm surge alerts have been issued, while officials have also reminded those in evacuation centres to observe social distancing as the coronavirus spread is also a concern.Dozens of international and domestic flights have been cancelled as the civil aviation authority ordered a one-day closure of Manila’s main gateway, the Ninoy Aquino International Airport.Goni is among the strongest typhoons to hit the Philippines since Haiyan, which killed more than 6,300 people in 2013.It follows Typhoon Molave, which hit the Philippines last month killing 22 people, mostly through drowning in provinces south of Manila.(Reporting by Enrico Dela Cruz; Editing by William Mallard) 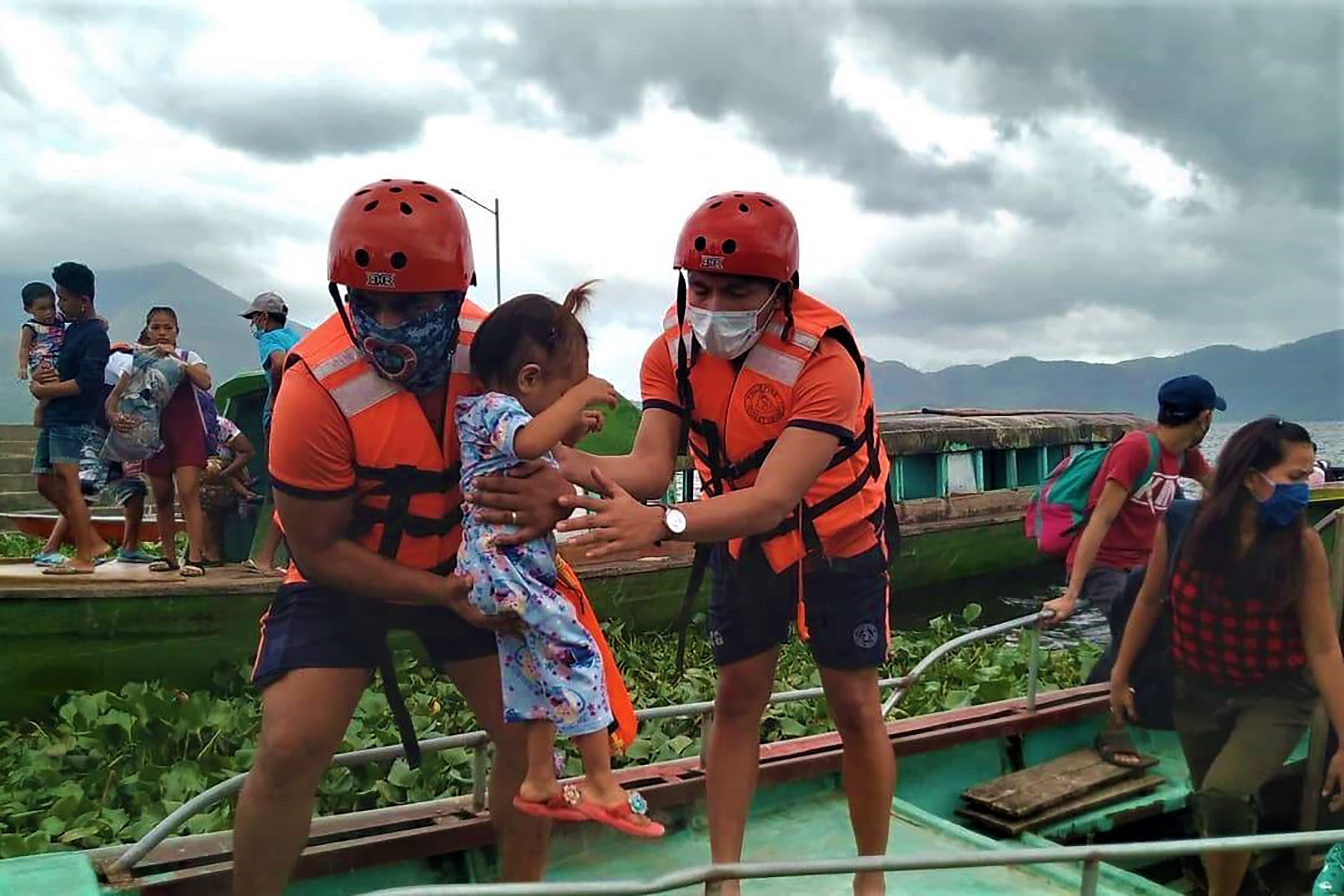 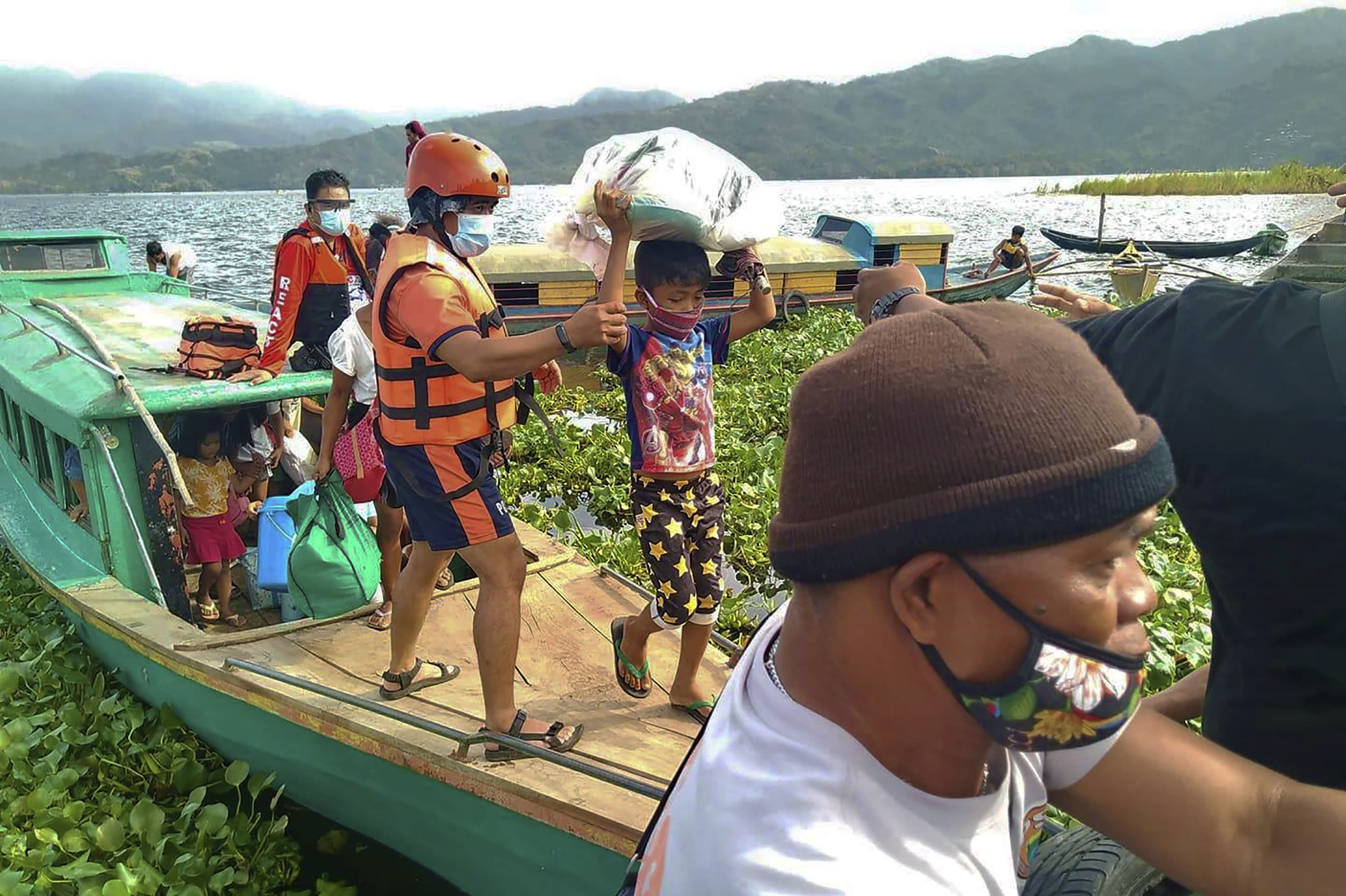 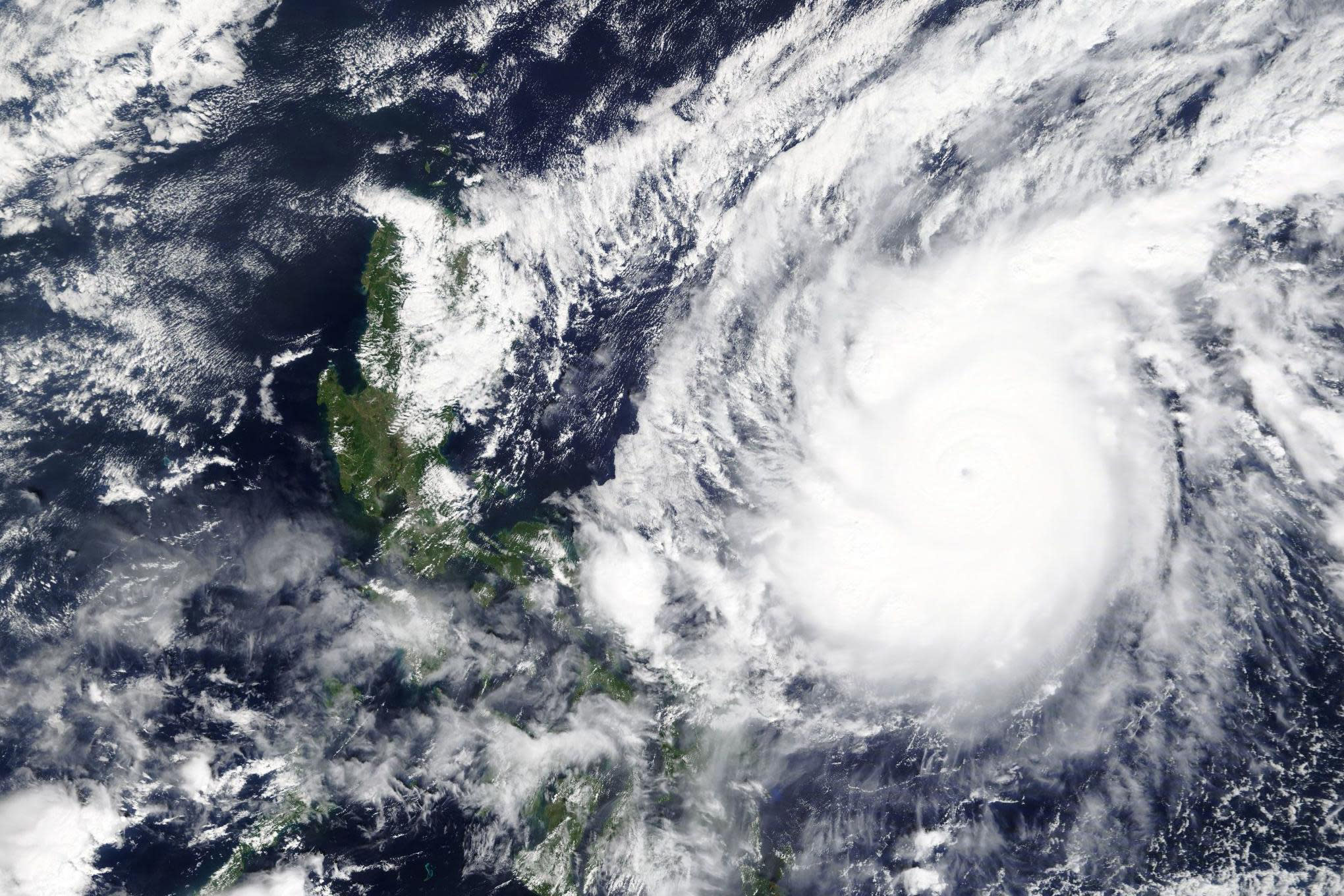 In this photo provided by the Philippine Coast Guard, members of the Philippine Coast Guard carry a child as they are evacuated to safer ground in Camarines Sur province, eastern Philippines on Saturday Oct. 31, 2020 as they prepare for typhoon Goni. Families living near coastal towns have started moving to evacuation centers as the strong typhoon approaches the country. (Philippine Coast Guard via AP) MANILA, Philippines (AP) — A super typhoon slammed into the eastern Philippines with ferocious winds early Sunday and about a million people have been evacuated in its projected path, including in the capital where the main international airport was ordered closed.“There are so many people who are really in vulnerable areas,” said Ricardo Jalad, who heads the government’s disaster-response agency. “We’re expecting major damage.”Typhoon Goni hit the island province of Catanduanes at dawn with sustained winds of 225 kilometers (140 miles) per hour and gusts of 280 kph (174 mph) — equivalent to a Category 5 hurricane. It was blowing west toward densely populated regions, including Manila, and rain-soaked provinces still recovering from a typhoon that hit a week ago and left at least 22 dead.“Within the next 12 hours, catastrophic violent winds and intense to torrential rainfall associated with the region of the eyewall and inner rain bands of the typhoon will be experienced,” the Philippine weather agency said in an urgent advisory.It said Catanduanes and four other provinces will be first hit, including Albay, where tens of thousands of villagers have been moved to safety, especially near the active Mayon volcano, where mudflows have caused deaths during past storms. Residents have been warned of likely landslides, massive flooding, storm surges of more than 5 meters (16 feet) and ferocious wind that can blow away shanties.One of the most powerful typhoons in the world this year, Goni has evoked memories of Typhoon Haiyan in November 2013, which left more than 7,300 people dead and missing, flattened entire villages, swept ships inland and displaced more than 5 million in the central Philippines.Jalad said nearly a million people have been preemptively moved into emergency shelters, mostly schools and government buildings. He warned of storm surges that could inundate coastal villages, including in Manila Bay.Forecasters said the typhoon’s eye may hit or graze metropolitan Manila, the densely populated capital region of more than 13 million, late Sunday to early Monday and asked the public to brace for the worst. The typhoon may considerably weaken after it hits the Sierra Madre mountain range, then cross the main northern Luzon island toward the South China Sea.

Manila’s main airport was ordered shut down for 24 hours from Sunday to Monday and airlines canceled dozens of international and domestic flights. The military and national police, along with the coast guard and firefighters, have been put on full alert.

About 1,000 COVID-19 patients were moved to hospitals and hotels from tent quarantine and treatment centers in the capital and the northern province of Bulacan, Jalad said. More emergency shelters would be opened than usual to avoid congestion that can rapidly spark infections.

The war-like typhoon preparations will further strain government resources, which have been drained with months of coronavirus outbreaks that prompted the government to set up isolation and treatment centers when hospitals were overwhelmed and provide aid to more than 20 million poor Filipinos.

The Philippines has reported more than 380,000 confirmed COVID-19 cases, the second-highest in Southeast Asia, with 7,221 deaths.

Displaced villagers may have to stay longer in evacuation centers even after Goni exits Tuesday due to another storm brewing in the Pacific that may affect the Philippines in a few days, Jalad said.

The Philippines is lashed by about 20 typhoons and storms a year. It’s also located in the so-called Pacific “Ring of Fire,” a seismically active region around the Pacific where earthquakes and volcanic eruptions are common and makes the impoverished Southeast Asian nation of more than 100 million people one of the world’s most disaster-prone.