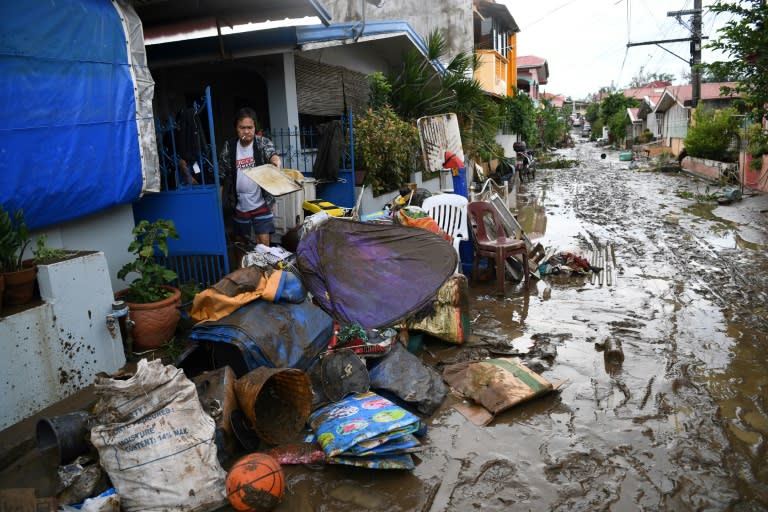 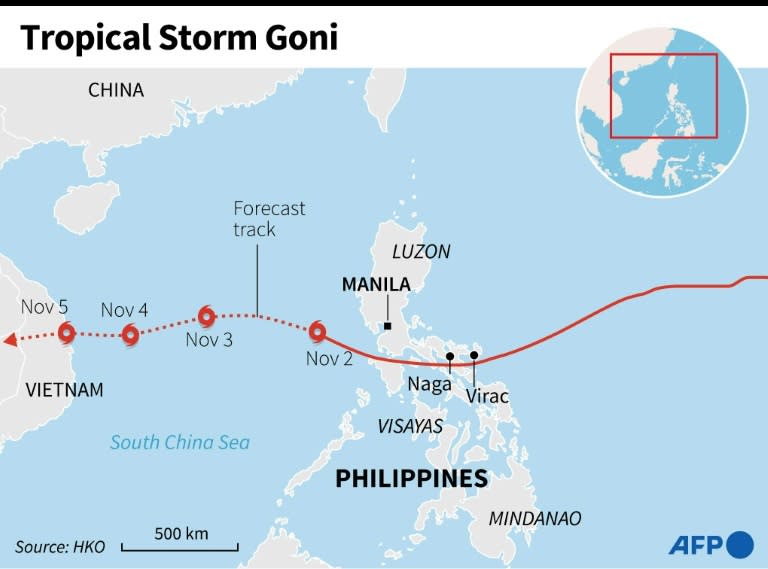 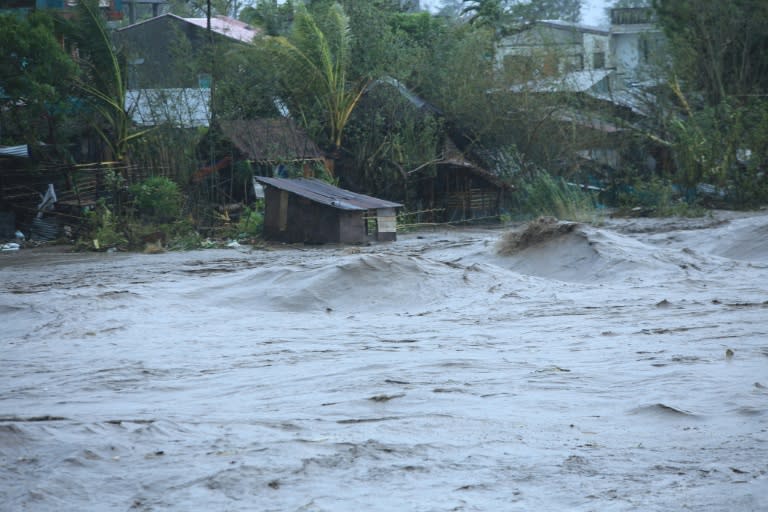 The most powerful typhoon to hit the Philippines this year destroyed tens of thousands of homes and killed at least 20 people, officials said Monday, as communications to the worst-hit areas remained cut off.Catanduanes Island and nearby Albay province on the most populous island of Luzon bore the brunt of Typhoon Goni which was packing maximum sustained wind speeds of 225 kilometres (140 miles) per hour when it slammed into the east coast on Sunday.Ferocious winds and torrential rain toppled power lines, triggered flooding and sparked landslides that engulfed houses as Goni swept across the southern part of Luzon.It lost intensity as it skirted the sprawling capital of Manila and headed out to the South China Sea.”We are horrified by the devastation caused by this typhoon in many areas including Catanduanes island and Albay,” Philippines Red Cross chief Richard Gordon said in a statement.”Up to 90 percent of homes have been badly damaged or destroyed in some areas. This typhoon has smashed into people’s lives and livelihoods on top of the relentless physical, emotional and economic toll of Covid-19.”Hundreds of thousands of people fled their homes ahead of the typhoon and many of them remain in evacuation centres as authorities scramble to restore power and telecommunications services in the hardest-hit areas.Fourteen deaths were recorded in Albay province, but provincial disaster chief Cedric Daep said without pre-emptive evacuations „thousands would have died”.”We have extensive damage to infrastructure and housing,” Daep said.”Many people are hungry. They had already suffered from Covid due to the loss of jobs and dislocation. Some don’t even have kitchen utensils.”- ‘Severely affected’ -Seven of the victims were in a town that was hit by a landslide of volcanic ash from the nearby active Mayon volcano.The mayor of Guinobatan told local media that around 147 homes had been swamped and some were now unlivable.Goni was ranked as a „super typhoon” when it made landfall on Catanduanes where at least six people died and authorities estimate most houses and infrastructure were damaged or destroyed.”We are severely affected here,” provincial Governor Joseph Cua told a government briefing.

Most of the island’s power lines were damaged in the typhoon and reports from towns were only trickling in, suggesting the toll could rise.

Across the areas in Goni’s path, more than 20,000 houses were destroyed and around 58,000 partially damaged, Civil Defense said in a statement. Farmland was also damaged.

Clean-up efforts were under way with residents removing sodden furniture and other belongings from their houses as they shovelled out mud and debris after heavy rains inundated towns.

The Philippines is hit by an average of 20 storms and typhoons every year, which typically wipe out harvests, homes and infrastructure, keeping millions of people perennially poor.

Its deadliest on record was Super Typhoon Haiyan, which unleashed giant waves on the central city of Tacloban and left more than 7,300 people dead or missing in 2013.

Storm Eta developed into a category four hurricane on its path towards Central America where it is set to cause “catastrophic wind damage” in certain areas, reports say.

The hurricane, which is the 12th in the season, is forecast to make landfall in Nicaragua on Tuesday, and is seeing maximum sustained winds of up to 130mph, the National Hurricane Centre (NHC) said.

The weather service warned that the system is forecast to slow down as it makes landfall and could cause catastrophic wind, flash flooding, and landslides.

“Eta is now a Category four Hurricane,” the centre tweeted on Monday. “It is forecast to slow down as it makes landfall in #Nicaragua exacerbating potentially catastrophic wind, storm surge, & flooding impacts as it moves slowly inland.”

A dangerous storm surge could raise water levels by as much as 12 to 18 feet above normal tide levels along the coast in the hurricane warning area.

Rainfall could reach up to isolated amounts of 35 inches through to Friday evening in much of Nicaragua and Honduras.

“This rainfall will lead to catastrophic, life-threatening flash flooding and river flooding, along with landslides in areas of higher terrain of Central America,” the NHC said.

According to an advisory from the agency issued on Monday afternoon, the storm is moving west toward Central America at 9 mph.

The entire coast of Nicaragua has been placed under a hurricane warning from the Honduras-Nicaragua border to Sandy Bay Sirpi. The northeastern coast of Honduras faces a tropical storm warning.

The forecast landfall location is near Puerto Cabezas, Nicaragua, with the worst storm surge flooding taking place to the north of the centre, The Washington Post reported.The development of a category four storm to hit land in November is incredibly rare, and there have only been three category four hurricanes on record during the month, NBC News reported.

Eta rapidly intensified to a Category 4 hurricane on Monday as it bore down on the Caribbean coast of Nicaragua and Honduras, threatening the Central American countries with catastrophic winds and floods.

The hurricane was packing winds of 150 miles (240 kilometers) an hour as it barrelled across the Caribbean towards landfall northeast of the Nicaraguan coastal city of Bilwi, the US National Hurricane Center said.

Traveling at nine miles an hour, Eta was expected to make landfall by 10 pm (0400 GMT) Monday and early Tuesday just north of Bilwi, the main town in Nicaragua’s Caribbean region.

„It’s raining hard, with lots of wind. The sea is rough. We are afraid,” Miskito teacher Kevin Lackwood, 22, told AFP.

Only the community’s men remained to protect the houses, he said. The women and children have already been evacuated from the village of some 800 people.

„If the situation becomes more dangerous,” Lackwood said, the men would leave too.

Other regions across the Caribbean and Central America were also facing a mauling from Eta, as the NHC said that „flash flooding and river flooding would be possible across Jamaica, southeast Mexico, El Salvador, southern Haiti, and the Cayman Islands.”

„We have managed to evacuate more than 3,000 families with the active participation of our army from Caribbean communities,” such as Prinzapolka and the Miskito Cays, Nicaragua’s Vice President and first lady Rosario Murillo said.

Those families have been moved to shelters in high, safe areas, said Murillo.

Fortunately, their Caribbean coasts are not full of big cities, but rather small towns; Honduras has a famous resort island that includes Roatan, popular with divers.

Some 100,000 people live in Bilwi and adjacent communities along the coast, mostly in indigenous communities likely to be hit hard by the hurricane.

Dangerous storm surges are expected to raise water levels by up to 18 feet (five meters) above normal tide levels in areas along the northeastern coast of Nicaragua, and up to five feet above normal along the coast of Honduras, where a tropical storm warning was in force.

„The eye of the hurricane is coming directly over Bilwi and we have it close by,” local resident Limbort Bucardo told AFP.

„There is some concern from the population, there are many flood areas, people are packing their goods and looking for ways to get out to shelters.”

Residents stocked up with food, lamps, radios and plastic bags to protect their belongings, Bucardo said.

Gonzalez said 1,600 indigenous people were evacuated from the outlying Miskitos Cays archipelago, in the path of the hurricane, on Sunday.

The government sent 88 tons of food to the region on Sunday, as well as emergency crews to help repair communications and infrastructure once the hurricane has passed.

And in mountainous Central America, flooded rivers can sweep over local residents in rural areas, in addition to triggering landslides.

Last month was a particularly mucky and murky one amongst the „dreaming spires” of Oxford, as the city experienced its wettest October in 145 years.

Data collected at the Radcliffe Observatory recorded 185.3mm of rain.

Not only was that the highest monthly total observed on the site since 1875, it was also the fourth wettest of all months since records began in 1767.

Its rain gauge is positioned in a pen close to the majestic neoclassical observatory building in the gardens of Green Templeton College. And even in this age of automation, the instrument is still read by eye every morning.

„We had an intense start to the month which was driven by Storm Alex, which saw 60mm falling on one day, the 3rd. That was quite something,” he told BBC News.

„But we also had 27 rainy days in the month. A rainy day is when rainfall is equal to or greater than 0.2mm per day, and those 27 rainy days are a record for an October.”

It rained pretty much everywhere on 3 October – not just in Oxford. The UK Met Office says that Saturday was the single wettest day for the country as a whole since daily record keeping began nationally in 1891.

Unsurprisingly with so much rain, the Radcliffe station recorded only 70.7 hours of sunshine through October – an exceptionally low number at over 30 hours below the monthly average.

Interestingly, Oxford’s all time wettest October in 1875 was accompanied by extensive flooding in the city. That wasn’t repeated last month, despite the less than 4mm difference in rainfall totals.

This may have something to do with the lower moisture content of soils following a relatively dry September. It would have meant the ground being better able to hold on to rainwater. But the absence of flooding on a similar scale almost certainly also reflects today’s improved management of watercourses.

The very wet October continues a year of exceptional weather in Oxford, following the sunniest May since records began.

As for the coming months, David Crowhurst is watching closely the developing La Niña phenomenon in the Tropical Pacific.

This is a pattern of altered pressure and winds that leads to cooler sea-surface temperatures off the western coast of the Americas. Although thousands of km away, these conditions can have a profound influence on Britain’s weather.

A strong La Niña could see some crisp clear days in the weeks ahead, followed perhaps by some more wet weather by the end of winter.

Note: These are monthly records. The continuous daily record at the Radcliffe is unbroken from 1827

Meteorology at the Radcliffe goes back to the pioneering 18th-Century studies of Prof Thomas Hornsby, a fellow of Corpus Christi College.

He was an astronomer, but to view the stars properly through his telescope, Hornsby also needed to make corrections for atmospheric disturbance, and that meant keeping a keen eye on the weather.

Some of his early documentation has been lost, and in the twilight of his career, Hornsby also got a bit haphazard in his observations. But the monthly rainfall totals he started are continuous from 1767.

It’s time series like the one assembled at the Radcliffe that give us context, and the confidence to make projections about where the weather and the climate may be going in the future.

All the data indicates the globe is warming and the physics tells us that a warming atmosphere can hold more water.

„Those are stark numbers. For many of us, though, they are hard to imagine. It is the union of weather and climate instead that turns out to be more tangible and interesting.

„What we witnessed on a day to day basis in October 2020, complete with its 27 rain days in Oxford, is how we might expect a wetter future to look. The weather has been unrelenting and the climate promises more.”

The Radcliffe Meteorological Station’s full history and all its data were published last year in a book, Oxford Weather and Climate since 1767, authored by Stephen Burt and Tim Burt.